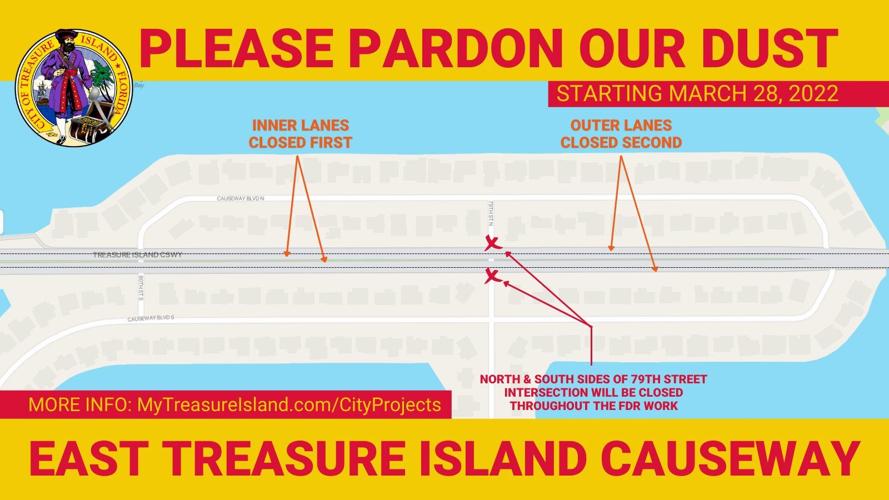 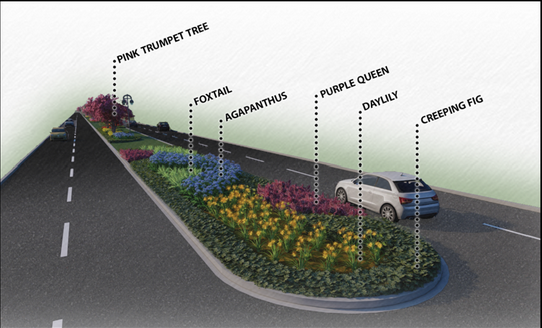 TREASURE ISLAND — The East Treasure Island Causeway reconstruction and drainage improvement project, designed to improve the structural strength of the roadway, is underway, with motorists advised to expect traffic delays.

The project is also designed to beautify the look of the causeway with Florida-friendly foliage, installation of modern roadway lighting and creation of safer areas for pedestrians, while treating rainwater runoff to remove pollutants.

Assistant Public Works Director Stacy Boyles said the city was awarded a state appropriation of $1.2 million and a water quality grant from the Southwest Water Management District of $275,250 to help pay for the project. In June 2021, a construction contract was awarded to Keystone Excavators in the amount of $2,396,700.

“The Causeway is the city’s primary evacuation route and entrance to the city, as such it is important to maintain the roadway and the drainage level of service,” she told Tampa Bay Newspapers.

The timing to complete the project by June will also coincide with the start of the hurricane season, with the evacuation route ready for a full traffic load.

Materials have been difficult to procure, and delays have occurred, she said.

The roadway will undergo full-depth reclamation, which entails pulverizing the existing base material and injecting additives to increase the strength of the base. That process was selected due to the relatively quick duration of the work when compared with other methods, Boyles said.

She told Tampa Bay Newspapers that traditional reconstruction of the roadway was also considered; however, full-depth reclamation was ultimately selected to reduce the construction impacts to the residents and visitors.

The project will first impact the inner traffic lanes, followed by the outer ones. During this time, there will be lane closures, and the north and south sides of the 79th Street intersection will remain closed to allow for through-traffic along the Causeway only.

Residents of Causeway Isles and Yacht Club Estates will be detoured to 80th Street and Causeway Boulevard North and South during this phase. The roadway base for both eastbound and westbound interior lanes will be rehabbed first, then graded prior to the installation of the initial lift of asphalt. An identical process will happen for the outer lanes once the interior lanes are cured and able to accommodate traffic.

“Maintenance of traffic for this phase will move with the reclamation equipment,” Boyles said. “Traffic impacts will be minimized to the extent possible. Motorists should anticipate intermittent traffic delays throughout this period as well as flaggers directing traffic through the project site.”

Dust abatement measures will be taken, but dust will be visible as the existing roadway is being pulverized, she said. Traffic lanes will remain closed through the overnight hours as the rehabilitated base material cures prior to accepting traffic.

“The project has been designed in a manner that will minimize the need to for long-duration roadway closures,” Boyles said. “However, there will be certain phases during construction where lane closures will be needed.”

The East Causeway is in the city of Treasure Island’s jurisdiction. There are no plans by the city of St. Petersburg to improve its western portion.

After roadway construction is completed, Duke Energy will install new streetlights and decorative poles in the median. Power to the poles will be underground.

“After the new decorative lights are installed later this summer, the city’s contractor will then install new Florida-friendly landscaping in the median,” Boyles said. “The timing for the landscaping depends on Duke Energy’s completion date.”

Along with creating a stronger roadbed, the project is also designed to install stormwater improvements that will focus on increased collection efficiency while improving the quality of water discharged to Boca Ciega Bay.

Boyles explained that gently sloped depressed areas, called bioswales, will be constructed along the outer edges of the roadway to allow rainwater to flow off the driving surface.  Low-impact design techniques are being utilized so that the “first flush” is retained within the bioswales. The “first flush” is the small volume of water collected during the beginning of a storm that typically contains a high concentration of pollutants and debris. While this small volume of water will be retained within the bioswales and allowed to filter over a 72-hour period, any remaining stormwater will flow to Boca Ciega Bay through existing and newly constructed pipes.

Residents and visitors will be notified in advance of the various changes taking place during the project, with updates on the city’s webpage and social media accounts such as Facebook.