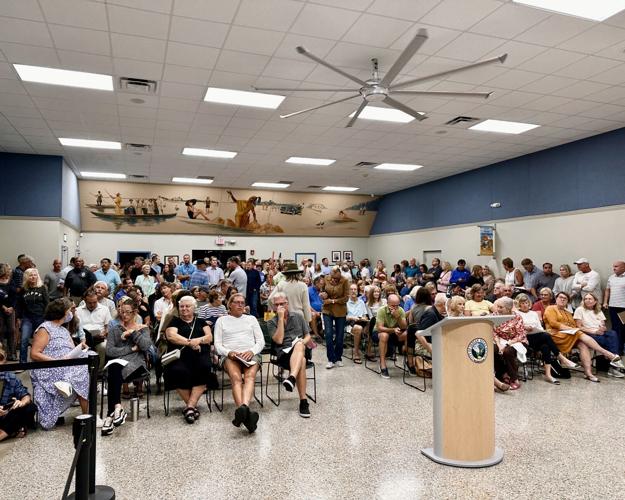 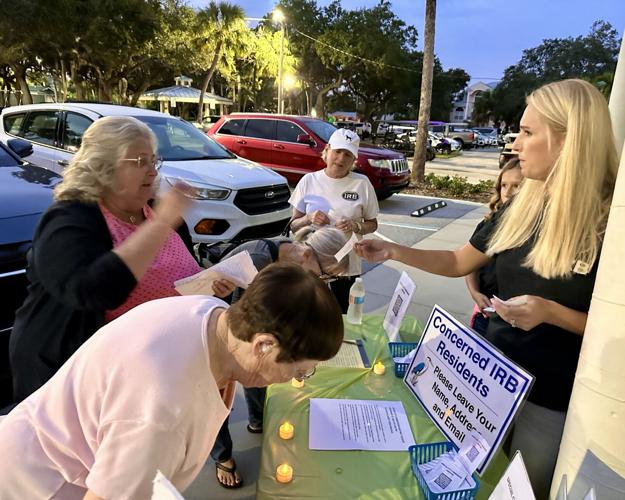 Members of a grassroots campaign hoping to crack down on the influx of short-term rentals in Indian Rocks Beach set up tables outside City Hall to dispense information prior to a public meeting on the subject. 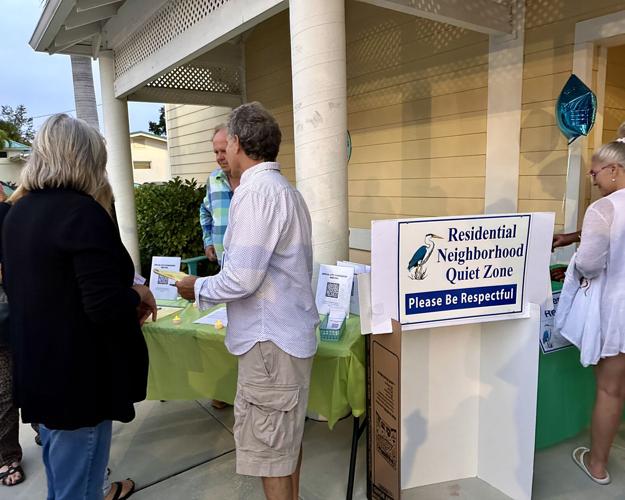 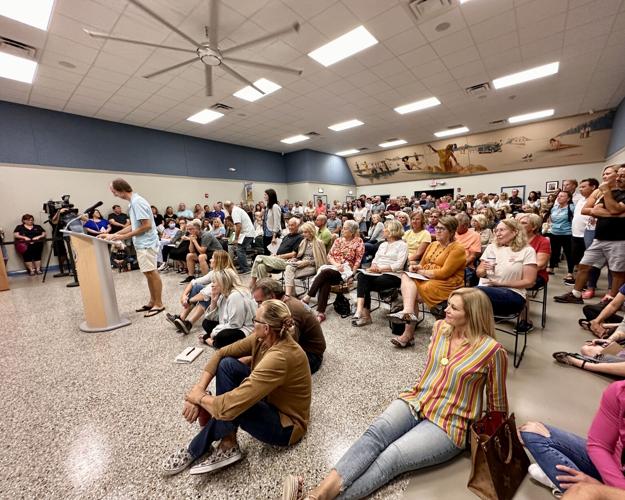 It was standing, or sitting, room only at Indian Rocks Beach City Hall for a special meeting on short-term rentals. 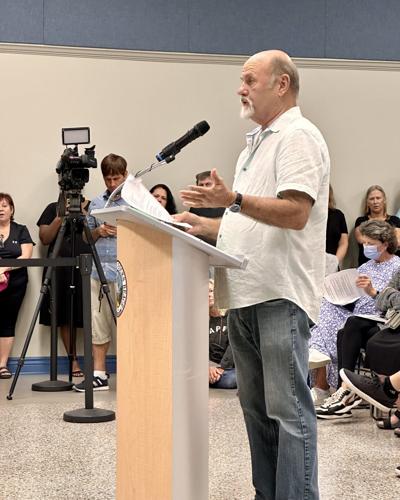 Longtime Indian Rocks Beach resident Bob Copeland spoke about research he conducted on the short-term rental issue during a special meeting on the issue. 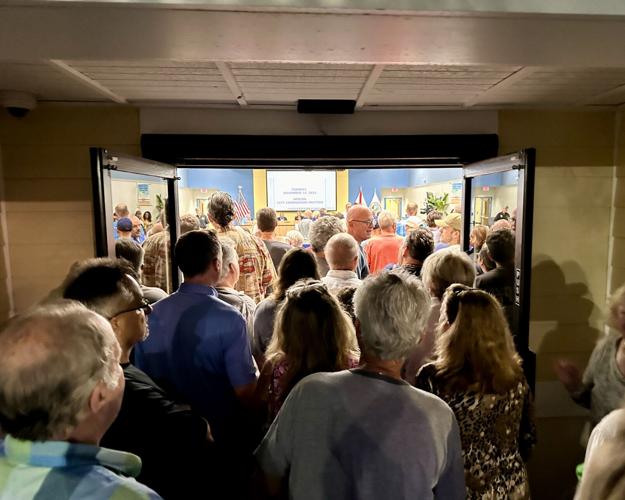 The line of speakers snaked outside the door of the Indian Rocks City Hall auditorium for a special meeting on short-term rentals. 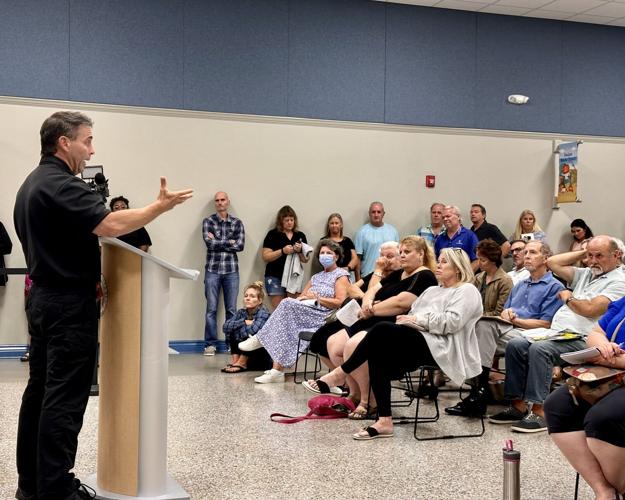 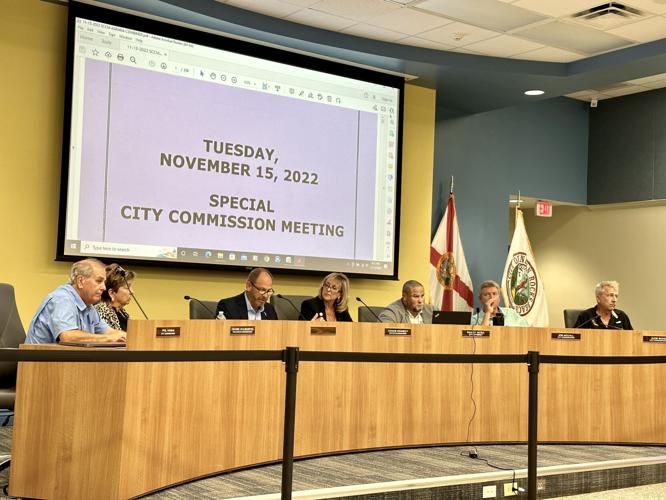 Members of a grassroots campaign hoping to crack down on the influx of short-term rentals in Indian Rocks Beach set up tables outside City Hall to dispense information prior to a public meeting on the subject.

It was standing, or sitting, room only at Indian Rocks Beach City Hall for a special meeting on short-term rentals.

Longtime Indian Rocks Beach resident Bob Copeland spoke about research he conducted on the short-term rental issue during a special meeting on the issue.

The line of speakers snaked outside the door of the Indian Rocks City Hall auditorium for a special meeting on short-term rentals.

INDIAN ROCKS BEACH — The line to speak at a Nov. 15 meeting on short-term rentals stretched from the front of the City Hall auditorium to the back and out the door, as hundreds showed up to vent on the hot-button subject.

During the lead-up to the meeting, members of a grassroots group opposed to the explosion of vacation rentals in the city repeatedly urged city leaders to address the “cancer in their community” and curb problems associated with “transient housing,” citing noise, trash and parking issues.

But many who came out spoke in defense of vacation rentals. Several urged for an end to the name-calling and for a cooperative effort to work together and find solutions.

“I own a short-term rental and I don’t want the bad elements there either,” Steve Van Leeuwen said early in the 3 1/2-hour meeting. “But I want to defend us. We make for an easy target.”

“People don’t understand what short-term rentals do for the community,” he said.

Van Leeuwen added that 6% of the booking fees go to the city “right off the top” and noted most visitors shop and eat locally.

“And I take issue with the name ‘transients,’” he said. “These people are tourists. They spend money here.”

That sentiment became a common theme as three-dozen speakers took the microphone, with some offering potential solutions to an issue that everyone agreed is not going away.

“This commission cannot outright outlaw short-term rentals,” City Attorney Randy Mora stated in his opening remarks. “It is not an option to us in 2022.”

Longtime resident Bob Copeland cited a state statute regarding vacation rentals that he said could lead to stricter regulations for the industry statewide.

“My memo provides a clear path for the city to get out of this problem by merely applying the rules under the statutes,” said Copeland, who directed the memo to the city attorney and City Manager Gregg Mims.

Copeland said he found a 2015 Flagler County case that was upheld on appeal and gives county officials the ability “to regulate anything except for frequency and duration” of short-term rental deals.

He added: “These statute provisions set a lower bar for enforcement than the laws regarding those issues for the general public in a residential area. The state set a special law to control improper behavior in public lodging. ... When these investors decided to buy a property as a (short-term rental) they have chosen to convert it from a residential use to a commercial use. And the commercial zoning, fire, and safety codes are much higher than residential.”

Copeland said those codes include mandatory fire suppression and escape systems, special inspections of balconies, railways and stairs for structures over three stories high. He said there also can be higher city fees and mandatory fences, guest registers and maximum occupancy limits.

“I would venture to say there are multiple rentals that are not in compliance,” Copeland said.

To that point, Pinellas County Fire & Rescue District Chief Jeffrey Davidson said the department is working on creating an ordinance related to fire-safety regulations that would piggyback with the city’s regulations.

“We’ve been working for months on an ordinance we want to enact districtwide,” Davidson said, noting the legislation would allow the department to inspect commercial lodging and “make sure they are following the code” when it comes to fire suppression, smoke alarms and other regulations.

Davidson said they also could “make recommendations” regarding occupancy and “we can work with the city to identify any issues.”

After a city of Largo code enforcement officer spoke about the hardships of enforcing regulations, Redington Beach Mayor David Will noted they “have the same problems” in his city and urged residents to keep contacting their state legislators in Tallahassee who have “handcuffed” the local lawmakers.

“Local voices should be making local choices,” Will said, adding there is a bill being introduced this legislative session “that will return your ability to weigh in on zoning (so) please don’t give up on that.”

“This is my 14th year up here and this is something we have to live with,” IRB Commissioner Phil Hanna said, “Florida Statute 509 is where this stuff is slipped in, so there definitely is a pathway, and together we can get this to happen.”

Mayor Cookie Kennedy, who noted state Sen. Ed Hooper was in attendance and is “on our side” of the issue, said the commission is going to write a letter recommending the fire department’s ordinance “so they can get moving on that right away.”

Kennedy noted the city has hired a second code enforcement officer to address rentals and is looking to hire a magistrate to handle the cases. She also instructed the city manager to start addressing things like maximum occupancy, business tax licensing, public information campaigns and increasing fees and fines.

The mayor also thanked everyone, including “the good vacation rental owners,” for working toward the betterment of the community.

“All the beach mayors agree on this issue,” she added.