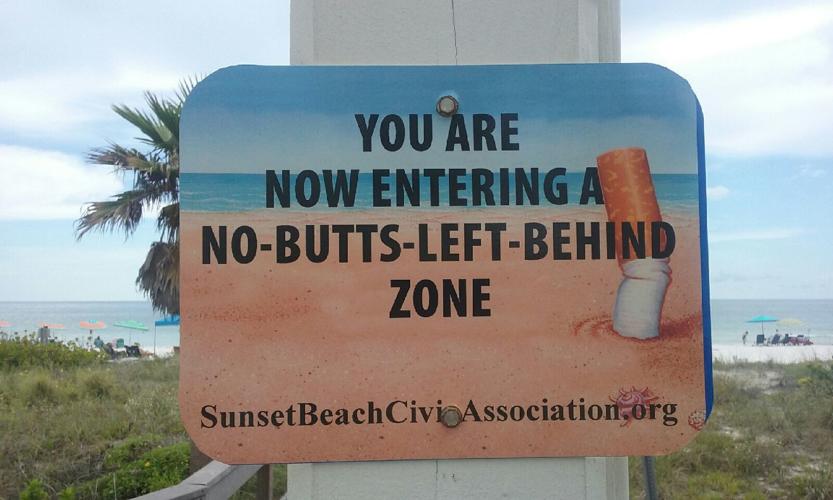 The Sunset Beach Civic Association has posted several small signs to encourage beach visitors to throw their cigarette butts in the trash cans. Local governments now have the power to create ordinances limiting or banning smoking, and several beach leaders say they plan to do so. 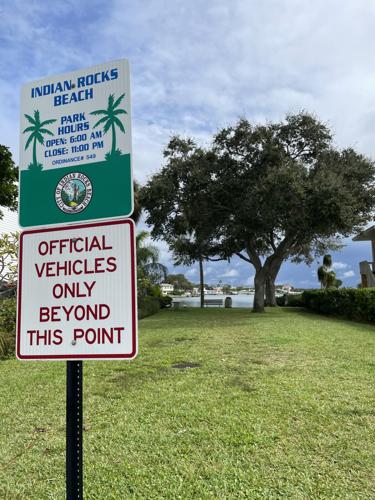 Municipal leaders recently agreed to draft an ordinance that bans cigarette smoking in public parks and beaches in accordance with a recent bill Gov. Ron DeSantis signed into law. 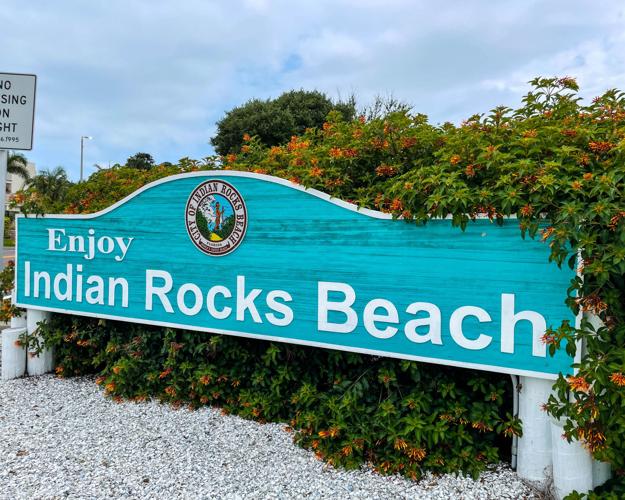 The Sunset Beach Civic Association has posted several small signs to encourage beach visitors to throw their cigarette butts in the trash cans. Local governments now have the power to create ordinances limiting or banning smoking, and several beach leaders say they plan to do so.

Municipal leaders recently agreed to draft an ordinance that bans cigarette smoking in public parks and beaches in accordance with a recent bill Gov. Ron DeSantis signed into law.

The bipartisan bill, which was signed into law by Gov. Ron DeSantis on June 17, allows local governments to create ordinances limiting or banning smoking, with the exception being unfiltered cigars.

According to the activist group Ocean Conservancy, cigarette butts were the most commonly found items during its annual International Coastal Cleanup event, and Madeira Beach Mayor John Hendrick agrees.

“We had the BeBot out at Madeira Beach last week, it actually digs down about 2 inches into the sand to clean the beach, and the number of cigarette butts it dug up just under the sand was incredible,” he said. Hendrick was referring to the Keep Pinellas Beautiful program that employs a robotic sweeper to clean the sand. “We know plastic is a big problem for the environment, and there’s a lot of plastic in those filters.”

Hendrick said he would support banning cigarettes but not smoking outright, while St. Pete Beach Mayor and BIG-C Chair Al Johnson said his commission is working on an ordinance that would encompass many elements of the beachgoing experience, including noise, pets, smoking and alcohol consumption.

“We’re working on an ordinance that takes and captures all of our beach regulations in one place,” Johnson said in response to a question from Indian Rocks Beach Mayor Cookie Kennedy as to what the other beach communities planned to do about the ban. “And my understanding is the recommendation from our beach stewardship committee is to eliminate smoking because that’s the biggest source of litter.”

Johnson said the city has “police powers over the whole beach, and ours is an alcohol-free beach although 70% of it is private, but it’s alcohol free on the whole thing. I mean, we have police powers. So, we can do stuff like that.”

When North Redington Beach Mayor Bill Queen asked if they “were all going to be consistent” with that plan, Treasure Island Mayor Tyler Payne said he thought “it would be a good idea to stay consistent,” and Kennedy agreed, noting her commission would address the issue at its next meeting on July 12.

“That’s why I wanted to get your thoughts before our next meeting,” Kennedy said in response to Payne, adding she “thought it would be good” for all the BIG-C communities to be consistent in the rules.

While the BIC-C members unanimously consented to support some type of smoking ban, one audience member decried their impending decision.

“This ordinance is not going to affect me, I live on the beach, and I’ll smoke on my property,” Indian Shores resident Diana Fuller said. “But you need to understand that if people actually become aware of the ordinance, you are depriving 19% of the population from coming and enjoying the beaches and sitting on the beach and relaxing on the beach. And I think you probably ought to have a workshop or something since you’re affecting 19% of the population, you should consider what they have to say, too.”

Fuller said where she lives, she “has more problems with Styrofoam cups than cigarette butts. If there is a receptacle withing walking distance, they will walk over and put their butt in it. But if there’s not a receptacle there, then they’re gonna bury it in the sand. So, maybe we should consider a less restrictive alternative. Thank you.”

Ultimately, council members agreed to wait to receive a copy of SPB’s draft ordinance and go from there.

“We haven’t discussed this explicitly since the governor signed this into law, but we’ve discussed it previous to that and my whole commission is in support of it, so I don’t have a doubt we will be adopting this ordinance,” Payne said.