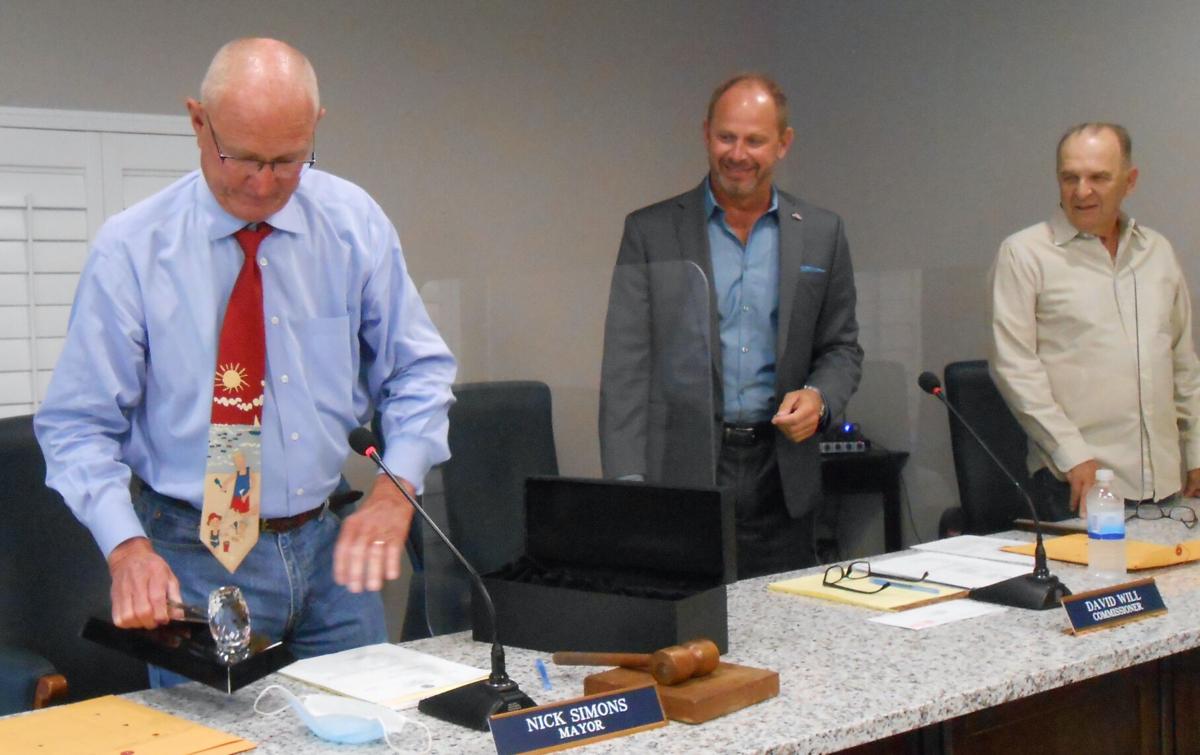 Outgoing mayor Nick Simons receives a crystal gavel for his 14 years of service on the commission. 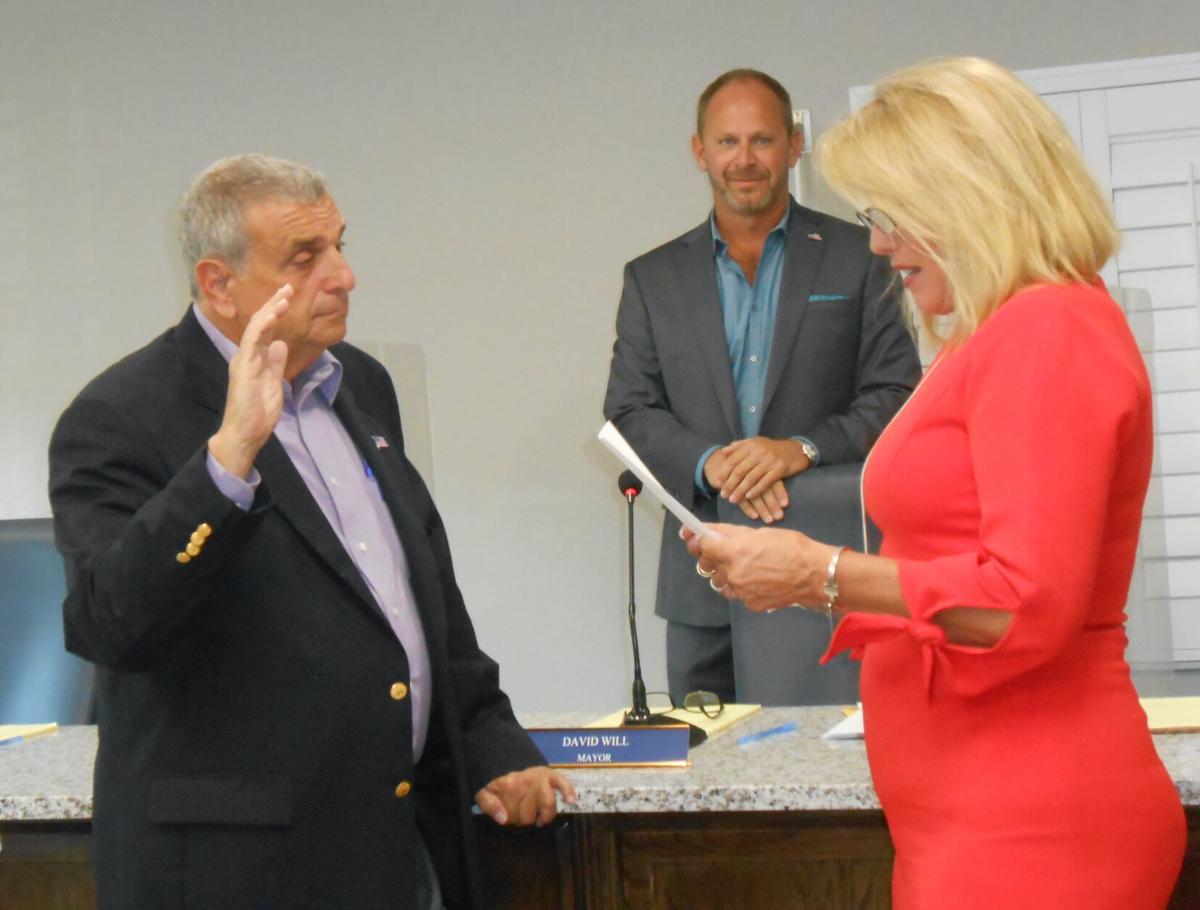 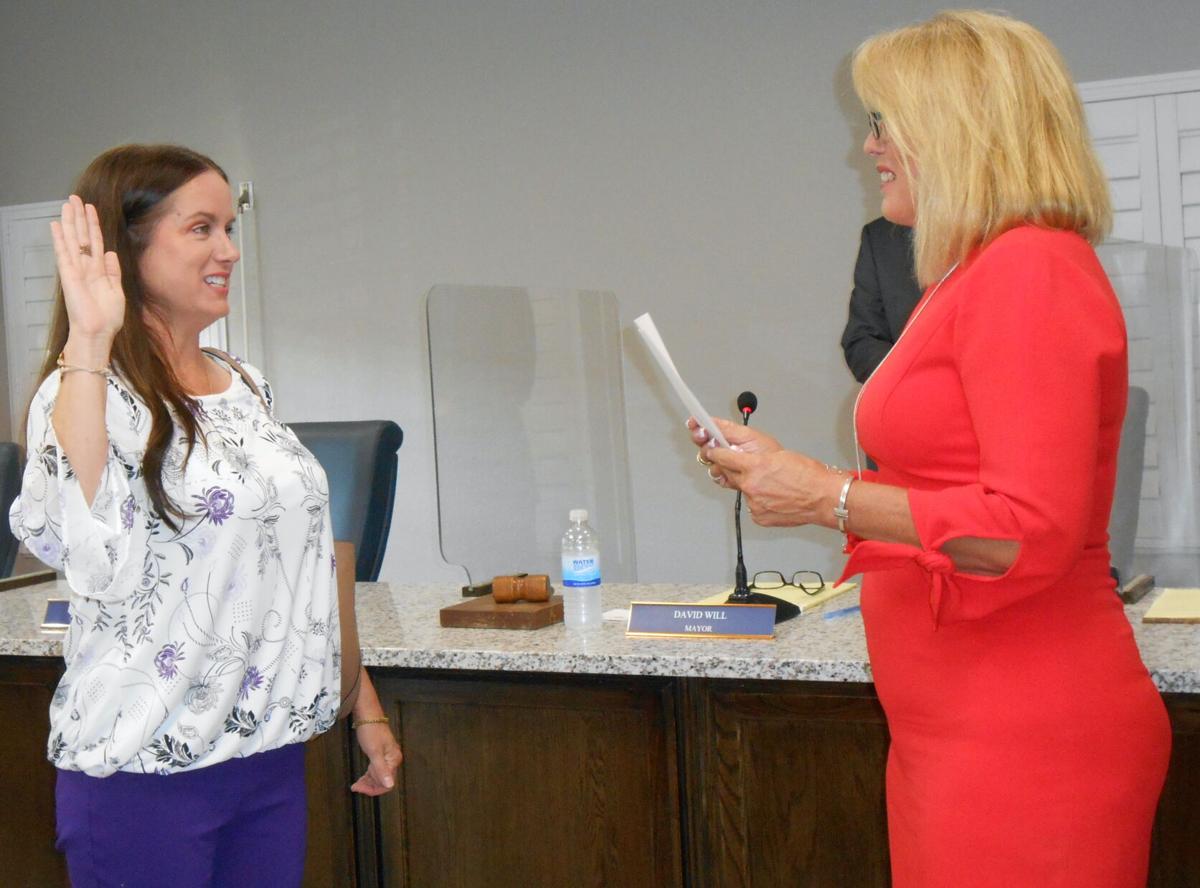 Shawntay Skjoldager is sworn in by County Commissioner Kathleen Peters.

Outgoing mayor Nick Simons receives a crystal gavel for his 14 years of service on the commission.

Shawntay Skjoldager is sworn in by County Commissioner Kathleen Peters.

REDINGTON BEACH — Adieus and accolades were in abundance March 17 as longtime members of the board of commissioners were bid farewell and newly elected members were welcomed and sworn in.

Cheers turned to consternation, however, as the new board, with two fresh commissioners, failed again and again to pick someone from a field of five to fill a vacant fifth seat.

“It has been an honor and a privilege to serve as commissioner these last four years,” said Tim Kornijtschuk, who had failed to gain a third term in the March 9 election. He said his time on the commission had been “a rewarding and fulfilling experience.” He thanked his former board mates and city staff, and “a big thanks most of all to the residents. It’s truly been my pleasure.”

Fred Steiermann, who fell short in his campaign for mayor, told the crowd, “It was a pleasure serving everybody and I wish the board good luck moving forward.”

Nick Simons decided to step away from the commission after 14 years on the board. He spoke of how he, Steiermann, and former commissioner Mark Deighton decided to run for the commission which, in 2007, was “in a little bit of turmoil.”

His voice cracked as he recounted his time as commissioner and mayor, saying “there’s been some bumps in the road, but by and large we’ve got a lot of stuff done.”

“The incoming commission needs all the support of everybody in this audience so they can begin to address the issues of Redington Beach going forward,” Simons added. “I’m sure they will be worthy of the occasion, rise to the occasion, do an outstanding job.”

Incoming mayor Dave Will and Commissioner Tom Dorgan presented Simons with a crystal gavel in honor of his service.

Immediately after he and the new commissioners were sworn in, Will called for action to fill his now-empty commission seat that he had resigned with two years left in his term.

Five applicants were invited to address the commission: John Miller, Kenneth Lotterhos, Alan Robinson, Susan Ferenc, and Kornijtschuk. Each applicant gave brief statements about their background and why they had applied for the post.

After the applicants had spoken, Will called for nominations. Cariello nominated Lotterhos, but his motion did not receive a second.

Skjoldager then nominated Miller. Dorgan seconded the nomination. Miller’s nomination was defeated 2-2, with Cariello and Will voting in the negative.

Dorgan then nominated Miller, noting that Miller got the third highest vote tally for the two seats in the election. Dorgan said he felt that was “a mandate from the community.”

“If we were going to follow a democratic process, he would be filling the seat,” the commissioner added.

Skjoldager seconded the nomination, but it failed, with Cariello and Will again voting it down.

Cariello rejected Dorgan’s support for Miller. “I feel that the people have spoken during the course of the election,” he said. “At this point the election is over. So now it’s my duty to provide for the town who I feel is the best qualified candidate. “

Under commission rules, the mayor cannot offer a motion, neither can he second one.

Lotterhos and Robinson both received support from residents in attendance. One man said he supported Lotterhos because he had “already proven himself” as vice chairman of the Planning Board. A woman said she supported Robinson because he was “an independent person who would fit into the commission.”

All commissioners agreed the applications were well-qualified to be appointed, but the focus was on Lotterhos. Cariello said Lotterhos was a “superb candidate,” and Skjoldager said she was “impressed by his level of knowledge.”

Dorgan said Lotterhos was an asset to the Planning Board, but he wanted Lotterhos to stay there. “For the betterment of the town, I’d like to see him stay where he is now.”

The lack of a fifth board member complicated the rest of the evening’s business. Will was unable to assign departmental responsibilities to the commissioners, so no reports could be made. A resolution to name signatories to the city bank accounts was tabled.

However, the commission did pass on final reading a dock ordinance amending the rules for non-conforming docks and approved a resolution regarding staff vacation days.

By a 3-1 vote, commissioners appointed Tiffany Terracciano to a position on the Park Board previously held by Cariello. The term ends in July. Cariello was the opposing vote.

As the meeting ended, commissioners agreed to meet with the commission applicants individually before the next meeting.

COVID-19 cases and deaths on downward slide in Pinellas County

Florida Department of Health reported yet another week with decreasing numbers of COVID-19 cases and deaths in Pinellas County. From May 10-16, DOH reported 656 new cases, bringing the count to 80,603. Sixteen more people died, upping the death toll to 1,649.