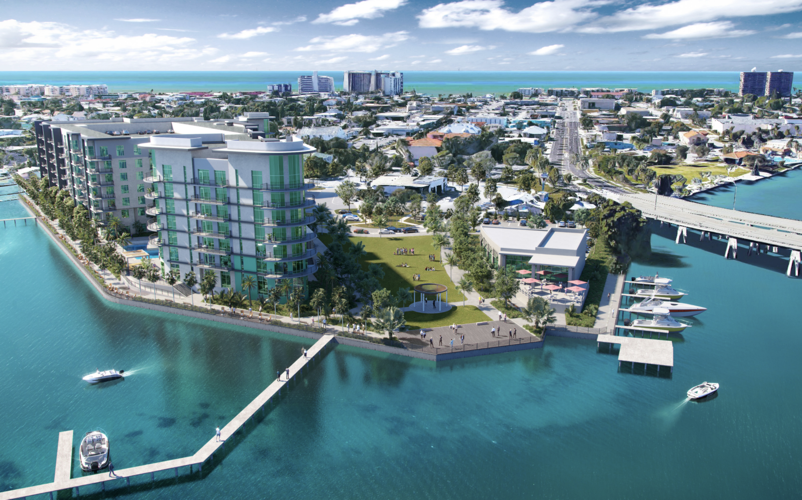 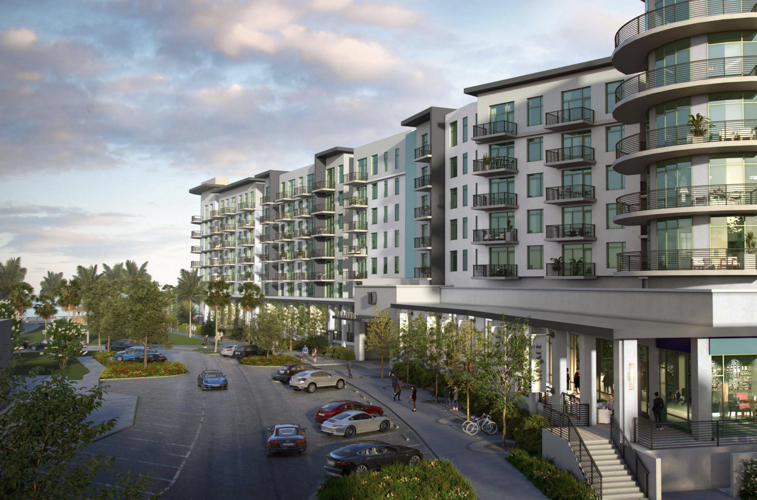 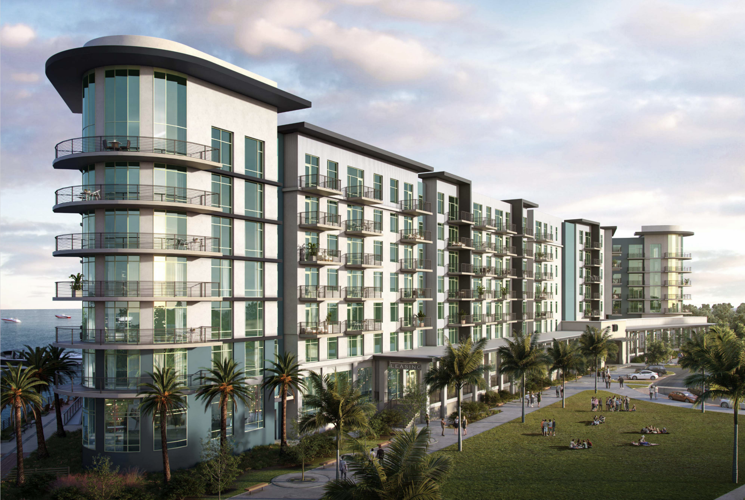 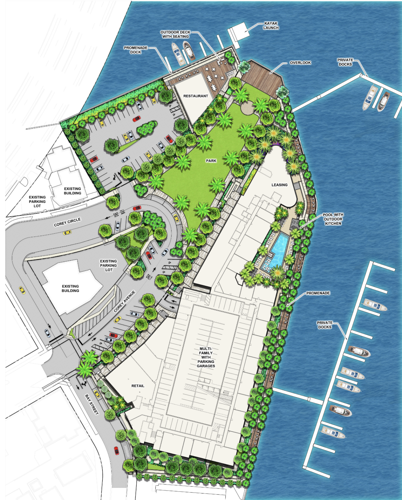 This conceptual site plan shows Corey Landing will include a mix of 243 apartments, retail space, a parking garage, restaurant and public park. 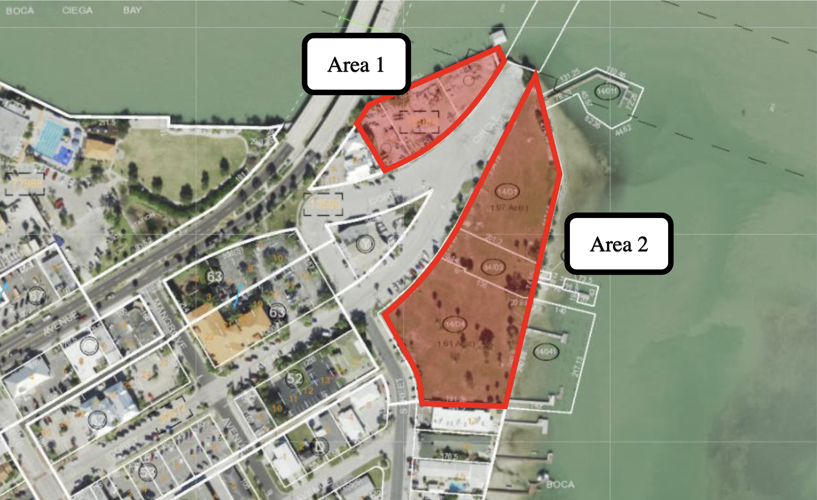 ST. PETE BEACH — Corey Landing moved a step closer to reality when city commissioners unanimously approved the allocation of 150 dwelling units from the city’s residential pool reserve that will allow the developer to build a 243-unit mixed-use development on 3.9 acres at the eastern end of Corey Avenue.

The project is planned as a seven-story, mixed-use development with retail and residential units wrapped around a seven-story parking garage, Planning Director Wesley Wright told commissioners during a Jan. 11 meeting.

A big part of the project will be a dedicated .7-acre waterfront public park and scenic overlook, with eight visitors’ docks near the restaurant and walkways connecting Corey Avenue with the waterfront.

“We think we can do an amazing project and we’re super-excited,” said Travis Williams, vice president for development with RAM Realty Advisors in Central Florida. “We’ve been working on it for over a year already, trying to get to where we are today, so we’ve put a lot of time and effort into it.”

At the hearing, it was announced that the developer is working with the city on a connection under the Causeway Bridge to Horan Park.

Attorney Elise Batsel, with the law firm of Sterns, Weaver and Miller, commented on how far the project has come in two years. “When we originally came before you we were asking for 325 units. It was a very different project than it is today. We’ve taken the comments we got from the community, and comments that we’ve gotten from commissioners, and really taken those to heart in trying to incorporate those into our project.”

She said her group also took the language in the Land Development Code to heart when developing the project. “The east terminus of Corey Avenue will act as a catalyst for revitalizing the entire Corey Avenue area, as well as creating a safer environment and attractive entrance to the city.”

The project captures items sought in the 2015 Corey Avenue Vision Plan, which included creating an east-end anchor and public space, housing to infuse life into the area, and an integrated streetscape to encourage pedestrian activity with a boardwalk amenity, Batsel noted.

“We have included each and every element from that vision plan from 2015,” she told commissioners.

She noted that in 2007 the property was demolished for development and then the recession hit. It’s been stagnant, abandoned and vacant since then, she said.

Commissioner Mark Grill questioned whether the city wanted to allocate 150 units from its 195-unit residential bank, which would leave only 45 units to dole out in the future.

Wright said that according to the Land Development Code, the intent of the pool program is to distribute the units in a way that promotes quality land management with a focus on catalytic revitalization. “This application seeks an additional 150 residential units for that very purpose,” he said.

The project would concentrate the pool units near one of the city’s three major entrances, which would maximize transportation efficiency rather than spreading the units, and their corresponding trips, out across the city, Wright said. “The project would bring commercial uses to the area and activate the northeast end of Corey Avenue, which would support the Comprehensive Plan’s goal to activate Corey Avenue from sunrise to sunset,” he added.

He told commissioners the project contains “a number of excellent features that will promote a high-quality development and benefit the city.”

The developer is committed to working with the city to create the public park that will turn an unsightly portion of Corey Avenue into a vibrant public destination for the community, with open space and enhanced access and utilization of the waterfront, Wright said.

In addition, he added, the developer will significantly improve stormwater infrastructure through a reduction in the overall impervious area and through the addition of a series of new drainage structures that will replace the single existing curb inlet.

Streetscape improvements will provide a safe accessible path starting on the west side of Bay Street, where new handicap ramps and decorative crosswalks will be installed. “The accessible path will extend all the way through the park to the waterfront,” Wright added.

In addition to granting approval of the allocation from the residential unit pool, commissioners also granted conditional use approval for commercial docks to be used by visitors to the restaurant and a request to permit outdoor dining.

Commissioner Ward Friszolowski said he understands some think the scale of the project is too big, but it does meet the city’s Land Development Code. To meet the goal of having an anchor on the east end of Corey Avenue and for it to be financially viable, a project has to have a critical mass of people and units to make it work.

“It’s not a wonder why this hasn’t been developed in 20 years,” he added.

Wright noted the commission’s action is a preliminary hearing in a process that will require additional approvals.