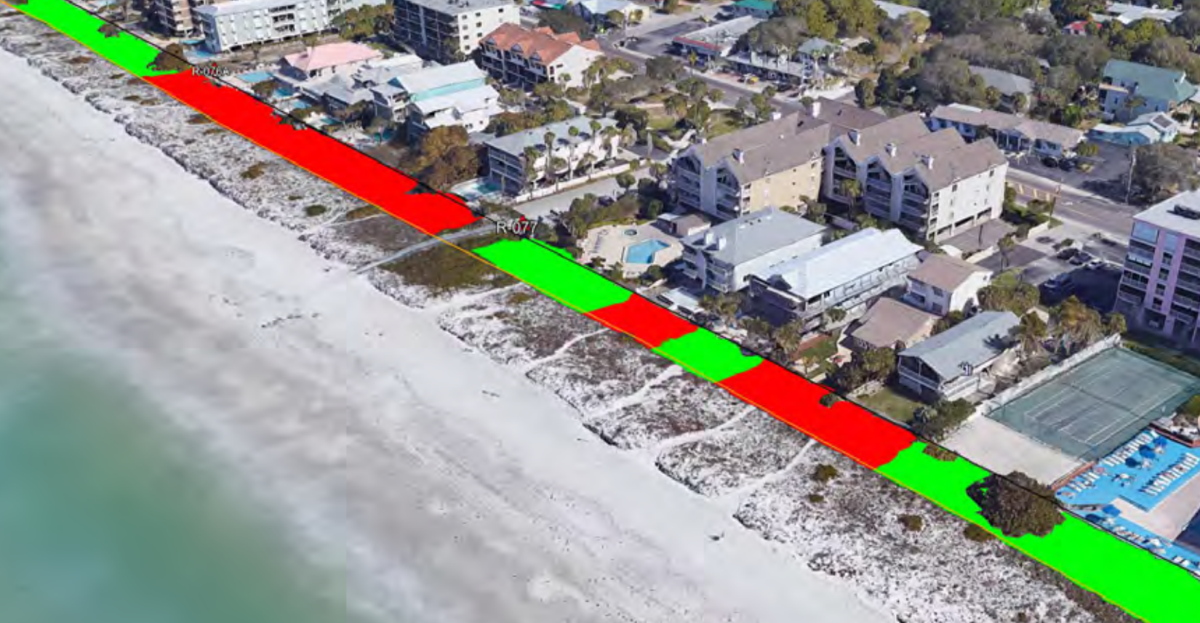 A strip of beach in the Sand Key nourishment project highlights the property easements that have been received, shown in green, and others that have not, in red. 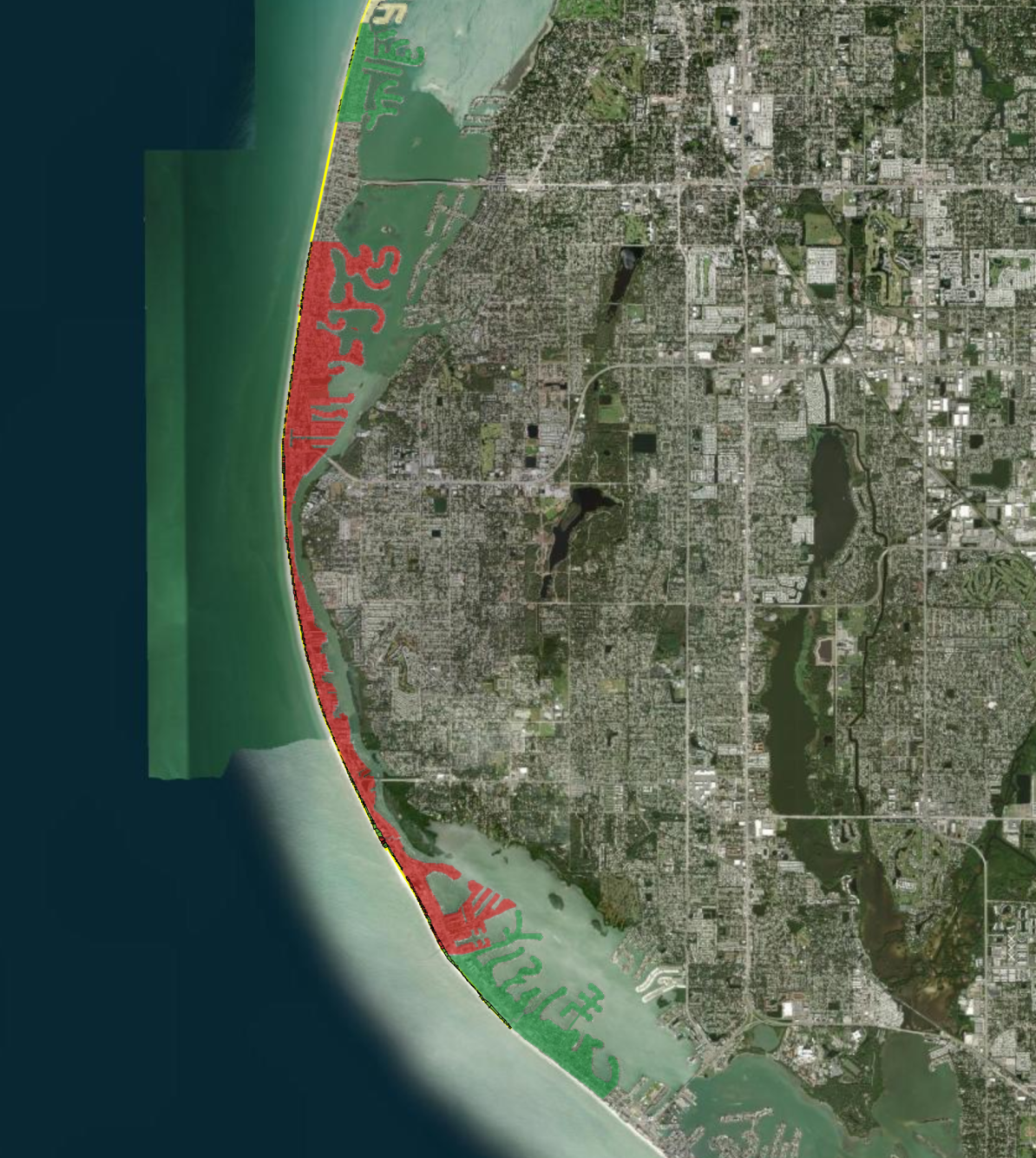 A map shows the scope of the Sand Key nourishment project, from Redington Beach north to Clearwater. The red indicates the areas — Redington Shores, Indian Shores, and Indian Rocks Beach ­­— that have not secured the easements required by the Army Corps of Engineers to conduct the project.

INDIAN SHORES — In case they haven’t been pounding the table long enough and loud enough, backers of the $45 million beach nourishment project designed to shore up the Gulf coast from Clearwater to Redington Beach had some bleak words for the area’s mayors.

“We’re still doing everything we can to protect the project, but everybody needs to be aware that we are at a very high risk of losing not only a big chunk of the project right in the middle, but the entire project for the 2024 cycle,” county public works director Kelli Hammer Levy told members of the Barrier Island Governmental Council, or BIG-C, on Dec. 2.

In other words, the reluctance of some gulf-front residents to sign on to the 9-mile project could spike the entire effort.

Beach nourishment typically is accomplished on a six-year cycle as natural tidal forces and occasional storms reshape barrier island coastlines. The Sand Key portion from Clearwater to Redington Beach is up for consideration for the next cycle in 2024.

The federal government pays 60% of the cost of such massive projects, with the state and county kicking in 20% each. In 2018, the Sand Key portion cost $45 million.

In exchange for that federal largesse, the U.S. Army Corps of Engineers requires all beachfront property owners who will receive fresh sand to sign an easement that, among other conditions, allows the public access to the beach.

That has some beach residents balking, although it changes nothing in the status quo.

The numbers aren’t even close for the three communities in the heart of the project. As of mid-November, only 21 of 75 had signed off in Redington Shores, 79 of 159 in Indian Shores, and 73 of 180 in Indian Rocks Beach.

After the Corps pushed up a deadline for a status report on the Sand Key project, the county responded that it “is not confident that it will meet (the Corps’) 100% easement requirement.”

The county requested that the Corps advance the project by nourishing those municipalities with 100% compliance to the north and south. While the Corps has been forgiving in the past, it has since stiffened its stance.

Those segments account for 55% of the sand placed in 2018, but the Corps could determine that the return on investment isn’t there.

“They did tell us that there is a strong possibility that once it got to headquarters, that the entire 2024 nourishment would be canceled,” Levy told mayors and representatives of the 11 beach communities that make up the BIG-C. “There is precedent for that. Which would mean we are not eligible.”

The next nourishment cycle would take place in 2030 — and the easements would still be required.

Indian Rocks Beach Mayor Joanne “Cookie” Kennedy said on Nov. 16 that losing the project would be devastating to small businesses already suffering from the pandemic.

“The last thing we need is for the Corps of Engineers and for our federal government not to renourish our beaches,” she said.

It’s not only the loss of the potential $27 million in federal funding that is haunting local mayors and other public officials.

“We’re looking to do everything we can to elevate it,” said Steven Cary, district director for U.S. Rep. Charlie Crist, a Democrat from St. Petersburg who represents the beaches. “Obviously, there’s a risk that runs to the economies on the beaches. But also, if we have these malnourished beaches, especially as a result of more storms like Tropical Storm Eta, we’re going to have some serious threats to human life as well.

“I don’t think there’s going to be a more urgent issue,” Cary said. “That’s why the congressman is taking some evasive action here with the Army Corps.”

Crist has requested a meeting with the Corps, the county and himself to address the issue.

“It is unacceptable that the Pinellas County Shore Protection Project be abandoned due to a sudden change in Corps policy, especially after completing multiple successful nourishment cycles prior to instatement of the easement requirement,” Crist wrote to Rickey R.D. James, Assistant Secretary of the Army for Civil Works.

Closer to home, Levy said the county would continue its outreach efforts to convince residents there’s nothing nefarious about the easements. The cause was set back when a resident sent out a mass mailing warning of dire consequences to beach property owners.

“That document did a lot of damage,” Levy said. “The pitch of the hill keeps getting more steep.”

She said some who declined to sign easements fear the verbiage about public use. Others have expressed concerns the county or another entity might allow construction or alternative uses on the fresh beach.

Neither has been an issue on Gulf beaches, Levy said.

A reinterpretation of federal law prior to the 2018 nourishment cycle led to the easement requirement.

“That’s the part that bothers me the most,” Levy said in an interview after the BIG-C meeting. “For so long, we’ve had this really great relationship with the community and everybody’s so happy when the beach nourishment comes. Then six years later, here we are, we’re back and we’re ready to put more sand down. But now that easements are tied to the project, it’s created a real barrier.”

In other business — but keeping with an unusual agenda of sand issues — the full BIG-C went on record expressing its support for dredging John’s Pass and a study for long-term solutions to a sand buildup in the waterway that divides Madeira Beach and Treasure Island.

In a letter to Madeira Beach Mayor John Hendricks, the BIG-C cited the reliance on the pass by numerous businesses, the consequences of dangerous currents, and environmental concerns.

The letter signed by BIG-C director Patrick Soranno, who is also mayor of Indian Shores, pledged organizational support and called on members to send letters of support to Pinellas County commissioners and the county’s legislative delegation.