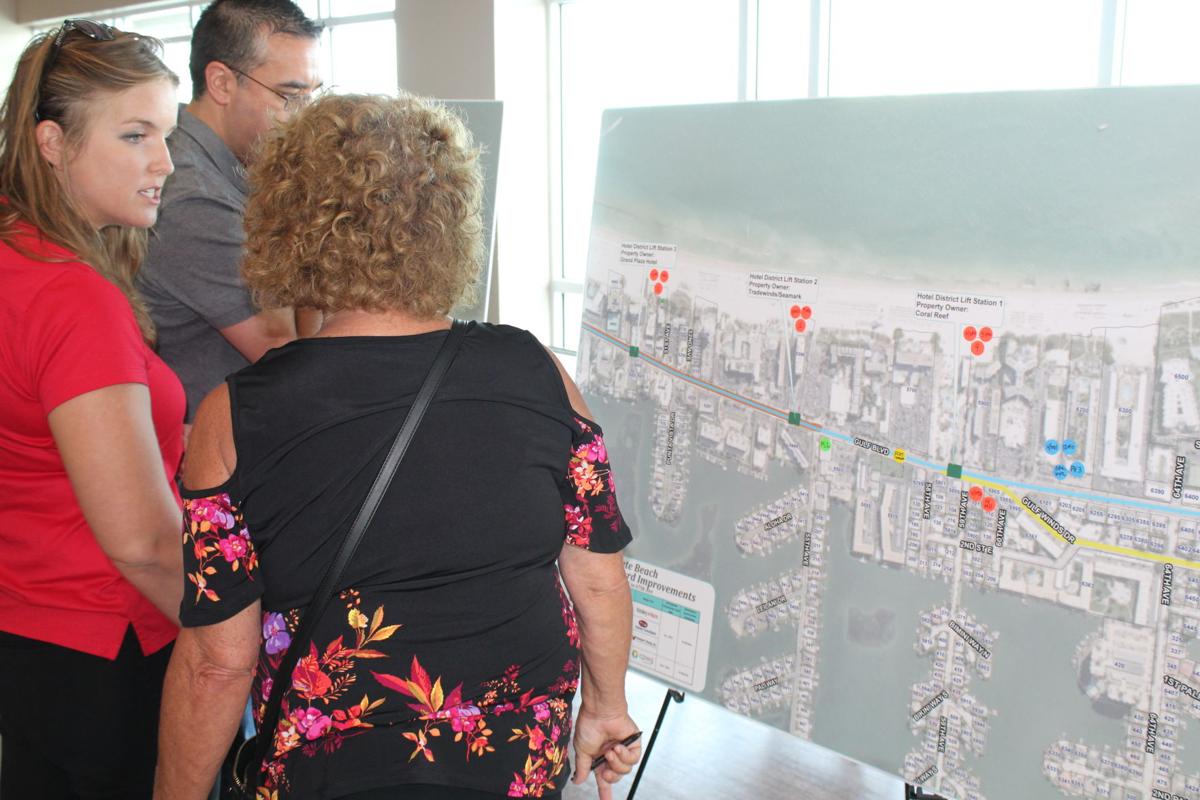 Shelby Hughes of Kimley-Horn, a planning and engineering consultant, discusses the projects with residents. 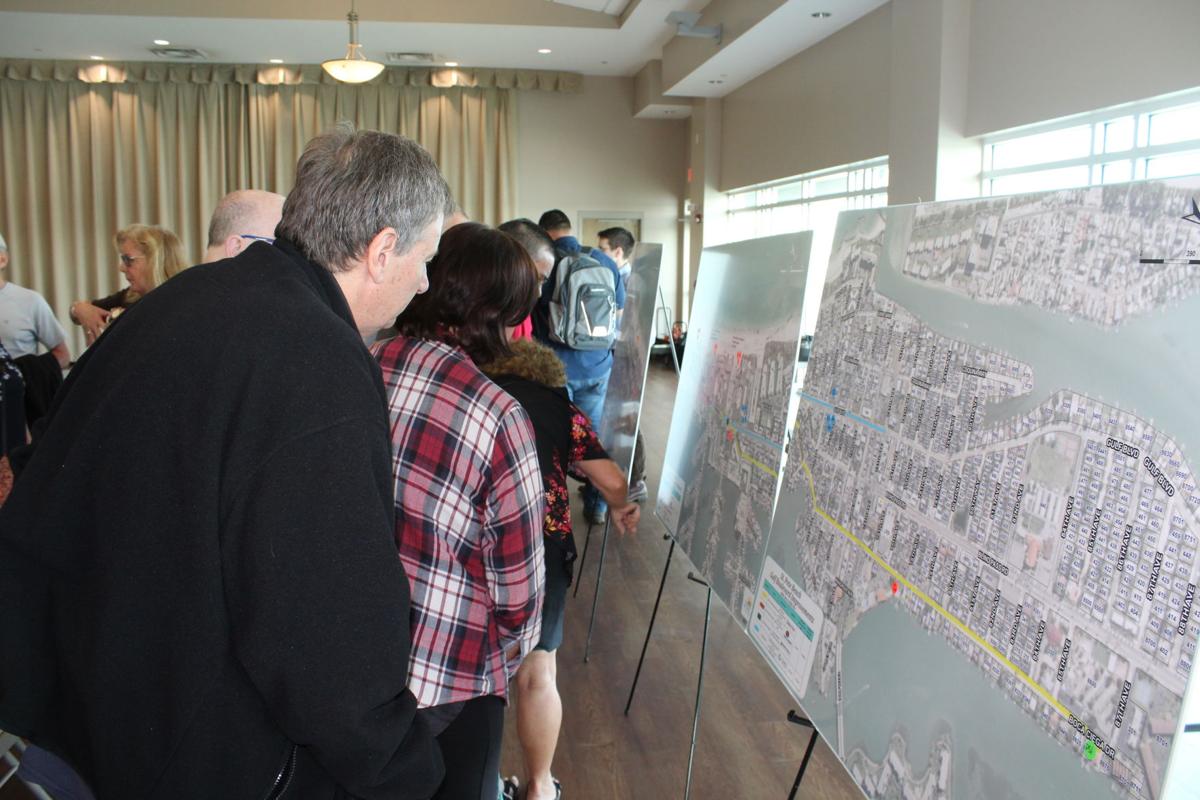 Residents line up to look at maps showing where construction will take place. 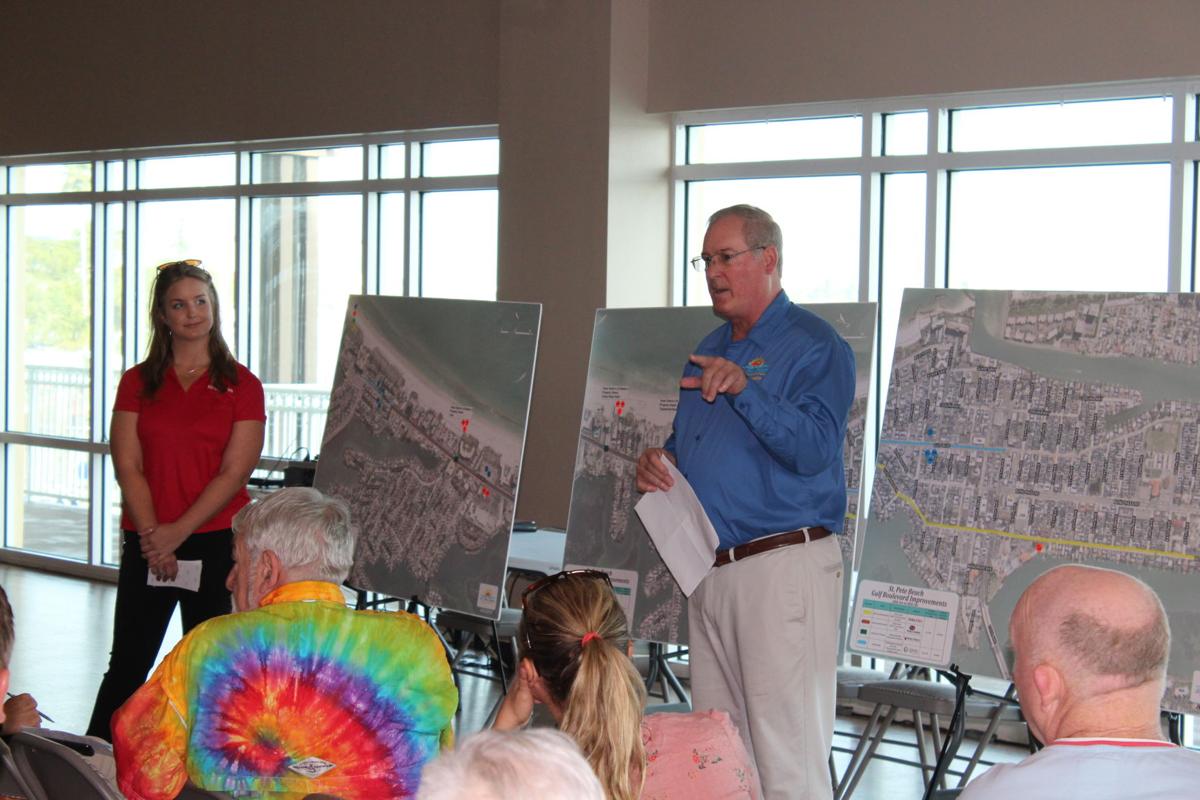 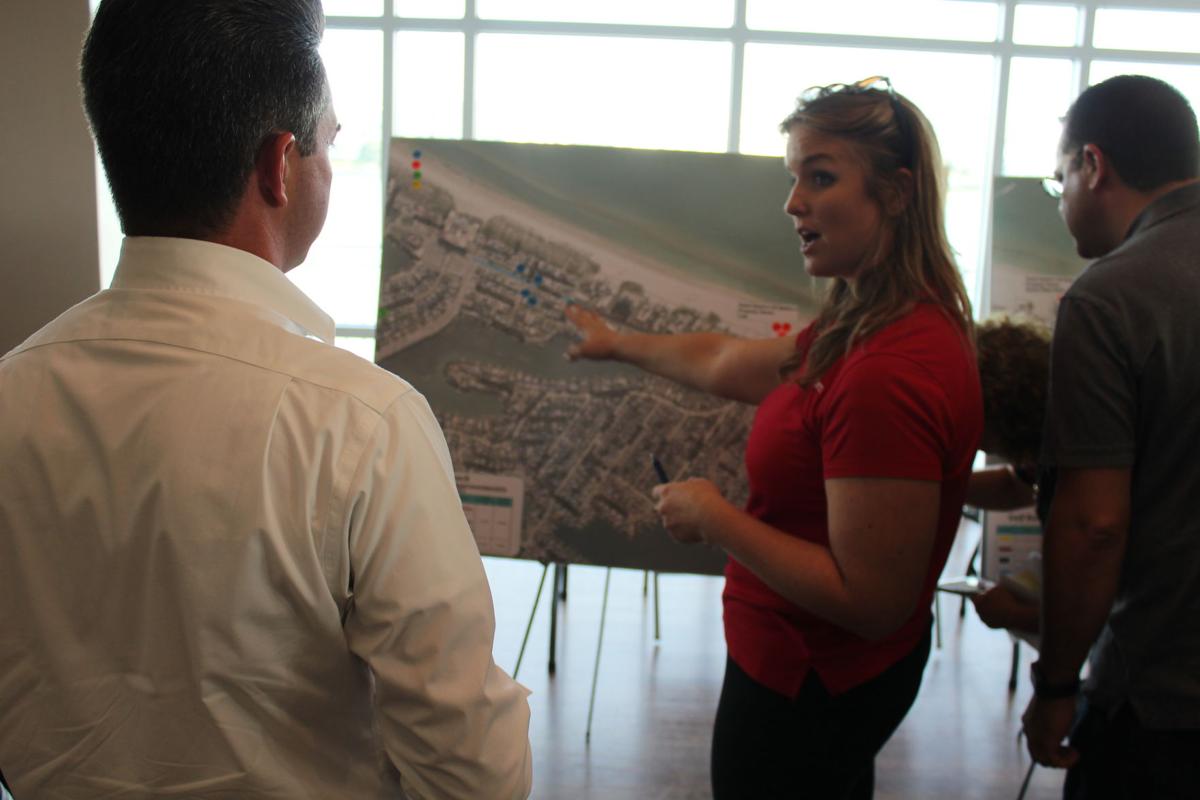 Shelby Hughes of Kimley-Horn, a planning and engineering consultant, discusses the sanitary sewer project with Doug Izzo, a St. Pete Beach city commissioner and government affairs director with the Tampa Bay Beaches Chamber of Commerce, on Feb. 11 during a forum at the City Recreation Building.

Shelby Hughes of Kimley-Horn, a planning and engineering consultant, discusses the projects with residents.

Residents line up to look at maps showing where construction will take place.

Shelby Hughes of Kimley-Horn, a planning and engineering consultant, discusses the sanitary sewer project with Doug Izzo, a St. Pete Beach city commissioner and government affairs director with the Tampa Bay Beaches Chamber of Commerce, on Feb. 11 during a forum at the City Recreation Building.

ST. PETE BEACH — Get ready to “settle in for the long haul.”

Those were the words Mike Clarke, St. Pete Beach’s director of Public Works, told a crowd of about 75 community members and business leaders earlier this month during a forum about a pair of long-awaited projects on the horizon.

The projects, which will overhaul the city’s sanitary sewer system and underground electrical lines along Gulf Boulevard, are expected to begin in July and last for about 2 1/2 years.

“This is a really exciting time for us here in St. Pete Beach, because there is a lot of expectation on what these two projects are going to be able to do for us,” City Manager Alex Rey said.

The $12.5 million sewer project includes four new lift stations and a new force main pipe under the inside-southbound lane of Gulf Boulevard from 37th Avenue to Gulf Winds Drive and then north on Boca Ciega Avenue to 87th Avenue.

Rey said the project, which is being financed through a low-interest loan from the Florida Department of Environmental Protection, aims to cut down on sewer overflows and will allow for new development that had been restricted by a lack of capacity.

“The moment that we signed the contract, the building moratorium has been lifted to the extent that people can now begin pulling building permits,” Rey said, adding that there has been plenty of interest in the Corey Avenue area.

In 2014, the city was placed under a consent order by FDEP for an inadequate sewer system that was causing sewage to overflow into streets and into Boca Ciega Bay. In 2016, city leaders adopted a moratorium on new development that would increase sewer flow, such as hotel construction, cutting down on potential revenue from bed and property taxes.

At the same time the sewer project is underway, the city also will be placing all of the overhead electrical and telecommunications lines on both sides of Gulf Boulevard underground and replacing all of the streetlights with LED light fixtures.

Clarke said the goal of the $12 million project funded by the Penny for Pinellas 1-cent sales tax is to both improve the appearance of the tourist-laden road from 75th Avenue to 35th Avenue and harden the electrical service grid against storm damage.

In order to mitigate the disruption to residents, Clarke said construction will be completed in segments of about three to five blocks, with each lasting for one to two months.

For instance, the first step of the undergrounding project in July will start by the Don CeSar from 37th to 35th avenues.

“It’s a two-step dance,” he said. “And I’m happy to tell you that the partners are not going to touch each other. The electrical undergrounding project will always be in a separate location than the sanitary sewer project. So the duration of detours and things of that nature will be somewhat smaller.”

He added that the city will keep the other lane of southbound traffic on Gulf Boulevard open at all times, but construction will mostly be completed during the day in order to decrease risks and cost increases.

Clarke also said contractors on the Blind Pass Road project are ahead of schedule and should be completed by the end of March, so there won’t be any overlap with the new projects.

Despite the city’s best efforts, Mayor Al Johnson said it’s not going to be easy.

“It’s going to be disruptive for sure,” he said.

But he said if you talk to the residents of Pass-A-Grille who underwent a similar project not long ago, you’ll find that the city does everything in its power to minimize the inconvenience.

“Everybody is skeptical to begin with. I’ve seen people come to these meetings and when Mike says we’ll work with you … to give you access to your place when we’re working in front of it, and they say, ‘Yeah, everybody says that.’ Well, actually he does it.”

Business leaders hope so, because they don’t want construction to cost them revenue from future events, such as the Super Bowl, which returns to Tampa next year.

Doug Izzo, a St. Pete Beach commissioner and government affairs director with the Tampa Bay Beaches Chamber of Commerce, said he understands the concern and the chamber’s mission is to be proactive.

“We (the chamber) support business, and we make sure that people know we’re open for business.”

Rey said the city will still need residents and businesses to be patient, but it plans to do plenty of outreach, including email blasts, social media updates, public forums, and a new page on the city’s website.

WHAT: Four new lift stations and a new pipe under the inside-southbound lane from 37th Avenue to Gulf Winds Drive then north on Boca Ciega Avenue to 87th Avenue.

SCHEDULE: Expected to start in July and be completed in January 2022.

WHAT: The electrical project will place overhead electrical lines from 75th Avenue to 35th Avenue on both sides of Gulf Boulevard underground.

SCHEDULE: Expected to start in July and be completed in April 2022.