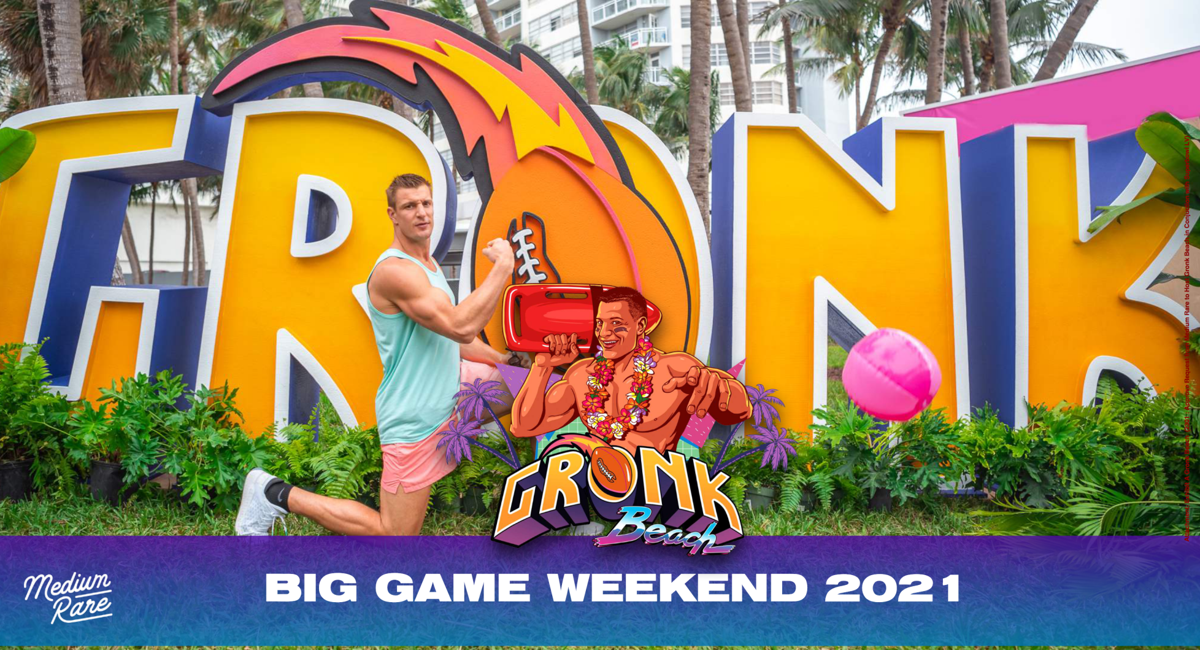 An event organizer wants to transform the area behind Gulf Front Park in Treasure Island into Gronk Beach, a rowdy party that will feature plenty of music, alcohol and — of course — Rob Gronkowski, the former New England Patriots star and new Tampa Bay Buccaneers tight end known for his fun-loving personality and penchant for partying.

An event organizer wants to transform the area behind Gulf Front Park in Treasure Island into Gronk Beach, a rowdy party that will feature plenty of music, alcohol and — of course — Rob Gronkowski, the former New England Patriots star and new Tampa Bay Buccaneers tight end known for his fun-loving personality and penchant for partying.

TREASURE ISLAND — The city of Treasure Island has scored a marketing touchdown worthy of one of NFL star Rob Gronkowski’s famed spikes.

That’s assuming the coronavirus pandemic relents by Super Bowl weekend in February, that is.

But if it does, the area behind Gulf Front Park will be transformed into Gronk Beach, a rowdy party that will feature plenty of music, alcohol and — of course — Gronkowski, the former New England Patriots star and new Tampa Bay Buccaneers tight end known for his fun-loving personality and penchant for partying.

The event, which was held for the first time in Miami this past February, attracted big stars from the sports and entertainment world, and will also put the national spotlight on the beaches of Treasure Island during the weekend of Super Bowl LV that’s coming to Tampa.

So, it’s easy to see why city commissioners July 21 were eager to authorize staff to negotiate an agreement with the production company organizing the event, Medium Rare.

“This is definitely a huge, huge deal and we’re very honored that you guys would consider us as a venue for this,” Commissioner Tyler Payne said. “And, as a 30-year-old, I think this is very exciting for our city to have something so mainstream and in the pop culture scene come to our town. So, I’m very excited.”

Adam Richman of Medium Rare said the honor was his because Treasure Island was the obvious choice for the 21 and older ticketed event that would be held from 1 to 7 p.m. Saturday, Feb. 6.

“What an unbelievable property you guys have. It’s really just beyond beautiful,” said Richman, who was shown around the area by the Super Bowl host committee a few weeks ago. “We went all around town. We were in Clearwater, we were in St. Pete, we were in downtown. … I think our head was spinning. We must’ve saw like 20 or 30 venues in the two-day span and without a doubt we knew that Treasure Island was the right home for what we’re looking to produce.”

And that is a festival of up to 4,000 guests that ESPN described as “the Gronkiest party that’s ever Gronked.” The party in Miami also attracted a wide range of celebrities, including Patriots coach Bill Bellichek, musician Lizzo, WWE star Triple H, and more than 30 NFL players. Gronk Beach also hosted musical performances by Flo Rida, Rick Ross, Diplo and Kaskade, and featured numerous local restaurants, cocktail bars, and art installations.

All of that star power attracted attention from all manner of national outlets and amassed 2.4 billion media impressions, a marketing number so big that Justin Tramble, the city’s assistant director of recreation, said it didn’t even seem real.

“Quite candidly, it’s a giant opportunity for Treasure Island to promote itself. It’s a national spotlight opportunity,” he said.

If the commission later approves the contract that will be negotiated by the city manager, Tramble said the event would feature the city as a prominent part of all media and marketing.

“The city’s logo would be on event advertisement and marketing,” he said. “They would advertise the event as being not in Tampa, not in St. Pete, but being in Treasure Island.”

The festival would be fenced off, use up to 100,000 square feet on the beach from 104th to about 107th avenues and would require the parking lot at Gulf Front Park.

“They have also expressed their desire to leave our beach in a better condition than when they arrived. They are going to hire a local cleaning company to be on the beach,” Tramble said, adding Medium Rare will have its own first aid and security teams.

Organizers will also contribute to the city’s summer camp scholarship and field trips.

“When they approached me with this, they had mentioned that Rob Gronkowski is all about children in the community and sports and youth sports, so they were excited about that opportunity,” he said.

Tramble prefaced his presentation, however, by addressing the obvious concern about planning any kind of mass gathering: the pandemic.

He said the event will be subject to CDC guidelines and all county and state orders, which currently limit gatherings to 50 or fewer people.

Also, if COVID-19 is still prevalent in the months leading up to the event, Medium Rare’s application states Gronk Beach will create a plan for social distancing based on the updated regulations, including hand-washing stations and temperature checks for all customers and staff.

Richman said his company holds 100-plus events each year and takes pride in being professional.

“You can expect nothing short of a world-class event that’s very safe and well-operated if we have the honor of producing Gronk Beach in Treasure Island,” he said.