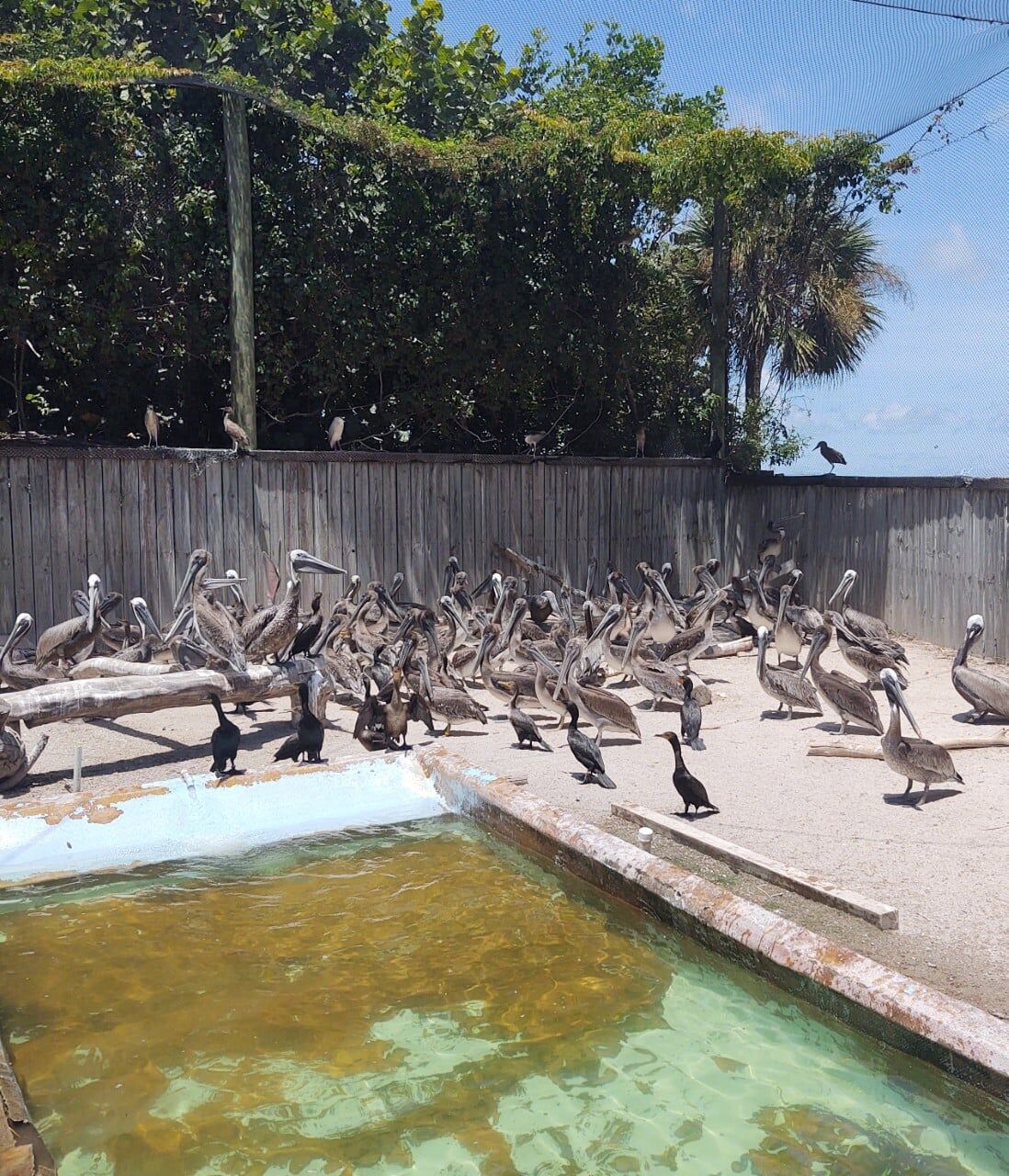 Pelicans, gathered around a pool area, number among the hundreds of feathered friends currently housed at the sanctuary. 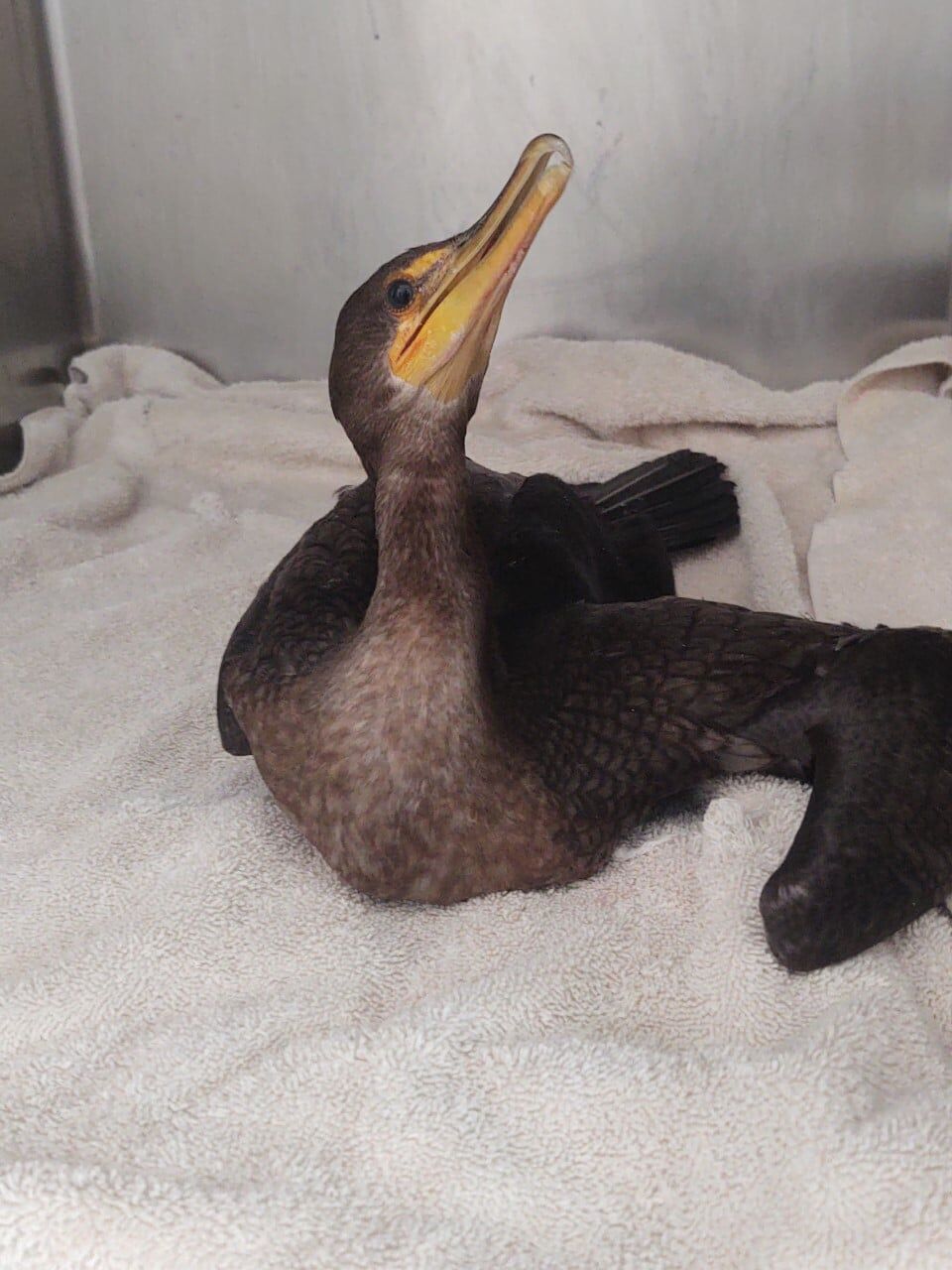 One of many cormorants rescued by Seaside Seabird Sanctuary's trained volunteers in recent weeks.

Pelicans, gathered around a pool area, number among the hundreds of feathered friends currently housed at the sanctuary.

One of many cormorants rescued by Seaside Seabird Sanctuary's trained volunteers in recent weeks.

INDIAN SHORES — Stroll any beach between St. Pete and Clearwater, and you occasionally might see someone who clearly knows what they’re doing gently helping a pelican in need.

But these days, that kind of rescue mission is a much more common sight along the area’s red tide-ravaged beaches.

“It can be frustrating at times, because there’s only so much you can do,” said Christina Chilbert, development manager of Seaside Seabird Sanctuary. “You only can stretch yourself so far with the resources you have.”

Since the red tide crisis developed a couple of months ago, trained volunteers from the Indian Shores-based sanctuary have rescued hundreds of seabirds along long stretches of malodorous beaches. Unfortunately, more than 100 of those returned to good health need to be housed until beach conditions improve sufficiently — a costly extra commitment for the sanctuary.

A common cause of the birds’ maladies right now: brevetoxin poisoning from eating rotting fish. Symptoms are readily apparently to rescue teams.

“The birds become wobbly and unstable, and a lot of times they will be lying flat in a way that you wouldn’t see in the wild,” Chilbert explained. “All birds can be affected by the brevetoxin, but primarily we are seeing brown pelicans and cormorants the most affected.”

Calls to Seaside Seabird’s injured bird hotline (727-391-6211) come in from beach towns stretching from Bradenton to Tarpon Springs, and that was true even before the red tide rolled in. But the ongoing surge in rescues has resources stretched to the limit.

Some 300 rescues have been staged each of the past couple of months, with at least 10 percent of the birds rescued displaying symptoms of toxicity in a replay of conditions from the 2018 red tide crisis. But if the stink of red tide has some beachgoers wary of treading the coastline, the all-volunteer rescue teams have no such qualms, Chilbert said.

“They’re very resilient people and regularly go climbing through marshes and trees in positions that are probably a bit worse than those involving the tide,” she said. “They’re pretty seasoned at this point.”

Seaside Seabird operates a fully equipped avian hospital to repair damaged wings and other infirmities. Then the birds are rehabbed outdoors at the sanctuary before finally being release back into the wild.

“But with the conditions with the dead fish and water quality, we’re not comfortable releasing them into that right now,” said Melissa Edwards, avian hospital director at Seaside Seabird. “We do have a large prerelease enclosure. If it does get really bad, we will look into transporting them out of the area where the water isn’t so bad. But we’re going to wait and see, because that can (be) added stress for the birds.”

The closest other bird sanctuary is Save Our Seabirds in Sarasota, but birds would likely have to be transported still further to find good enough conditions, Edwards said.

Even prior to the red tide crisis, the Indian Shores sanctuary has been home to almost 100 permanently disabled birds, regularly visited by members of the public in free walkabouts or paid group tours. Residents on view for such visitors include a bald eagle, several owls and some hawks, along with dozens of seabirds.

“They actually earn their keep, which is nice,” Chilbert said with a chuckle. “And that money goes directly to the birds.”

“It’s also bird season right now,” Chilbert noted. “So, between re-nesting baby birds and maybe rescuing birds that have been hit by cars, the red tide toxicity isn’t helping at all. We have roughly 100 brown pelicans and 30 cormorants that are ready to be re-released back into the wild, but we’re hesitant to do so because of the red tide.”

As a result, costs of housing and feeding the growing number of birds have soared. “Our restaurant is full,” she said.

Seaside Seabird has a paid staff of six and relies heavily on more than 40 volunteers.

The organization accepts donations via its website (seasideseabirdsanctuary.org) and the group’s Facebook page. It also welcomes donations of supplies such as bleach, detergents and paper towels, and fruits including grapes, blueberries and apples.

“We also are looking for large donors to help us with fixing structurally damaged pools and aviaries, and with our educational projects,” Chilbert said.

Additionally, officials are trying to identify possible avenues of funding via grants and disaster relief sources.