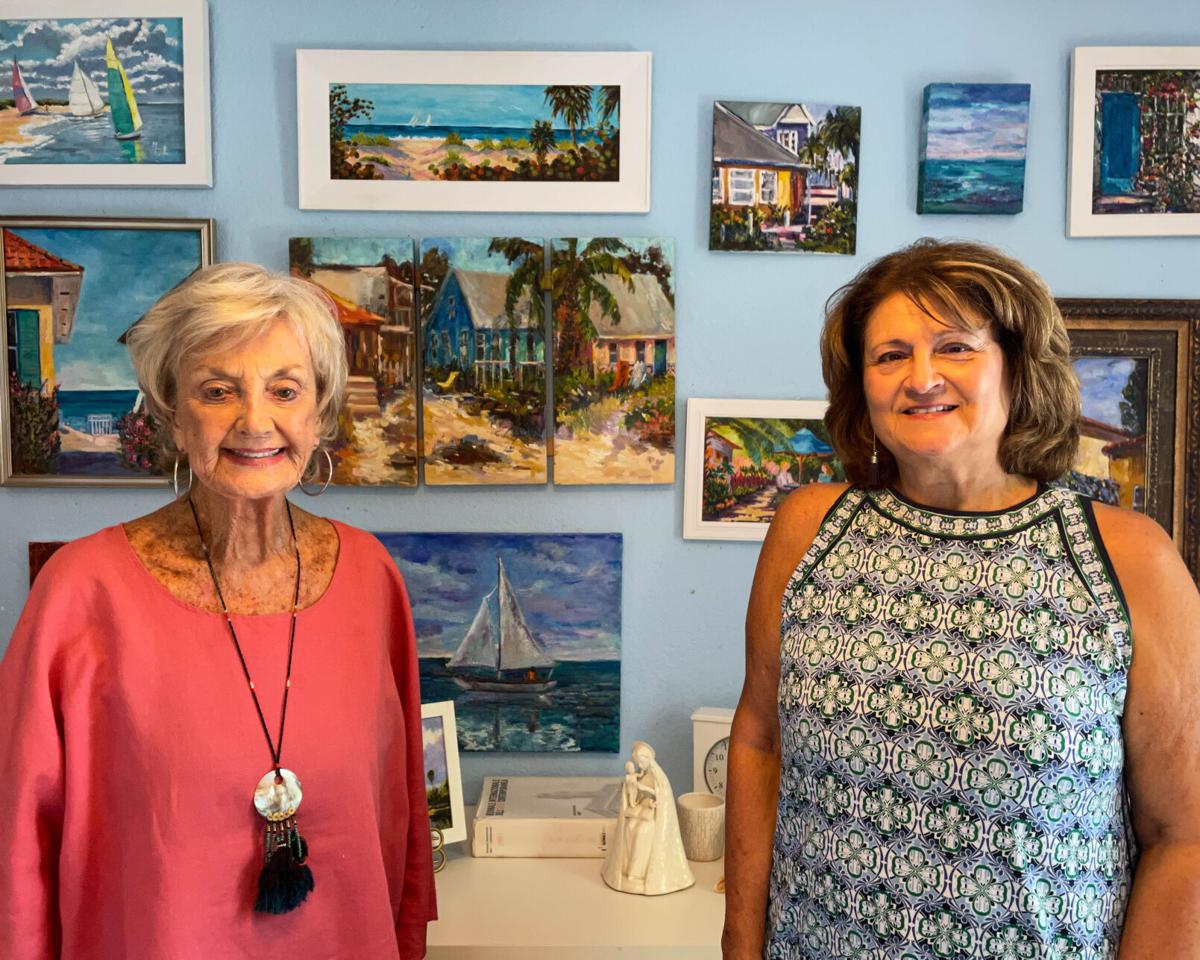 Mary Rose Holmes, left, one of the founders of Plein Aire Cottage Artists, poses with IRB Action 2000 President Diane Flagg at her beachfront studio in September. 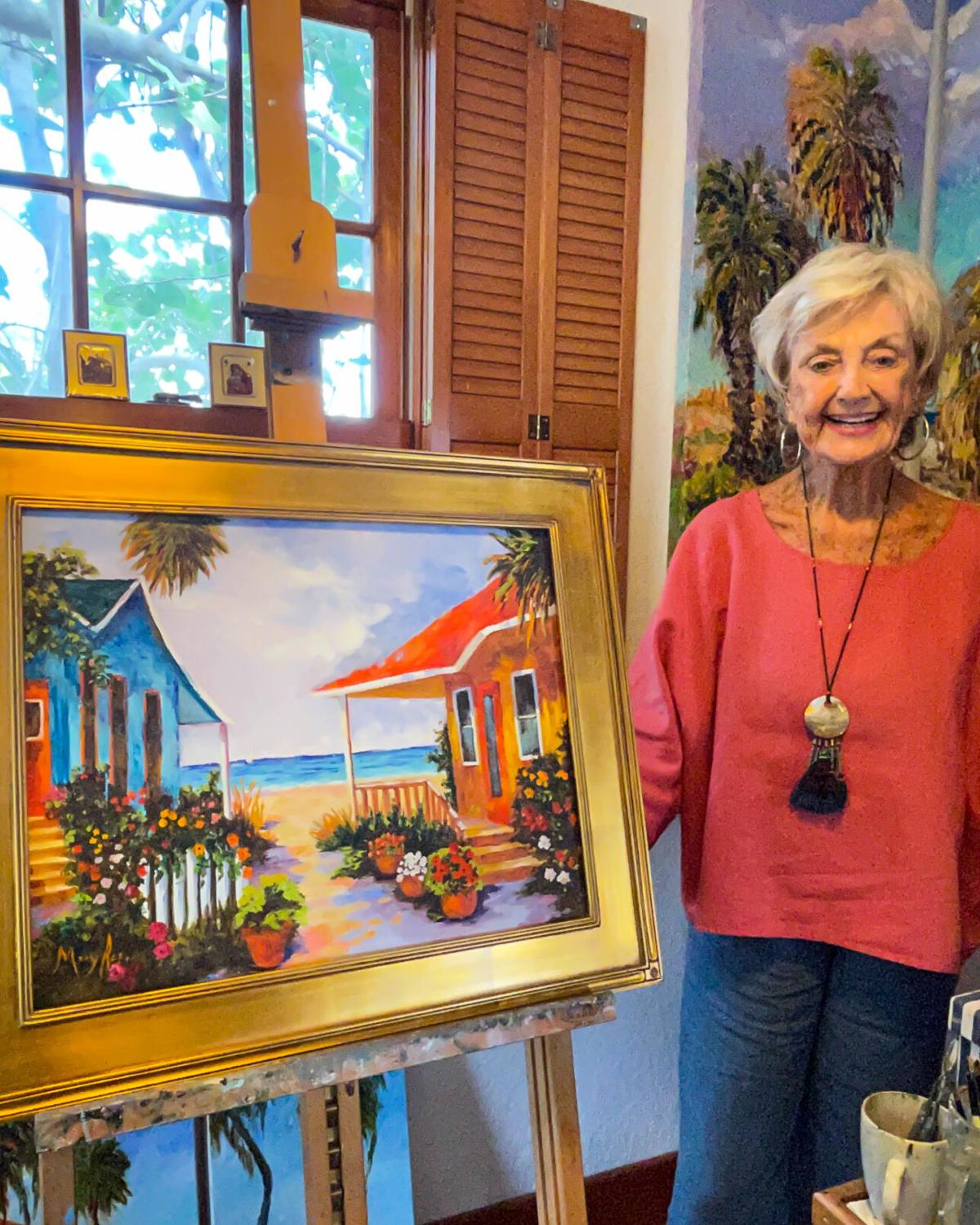 Mary Rose Holmes, one of the founders of Plein Aire Cottage Artists, poses with her painting titled “Enchanted Paradise” that she donated to IRB Action 2000 for last year’s Oktoberfest. 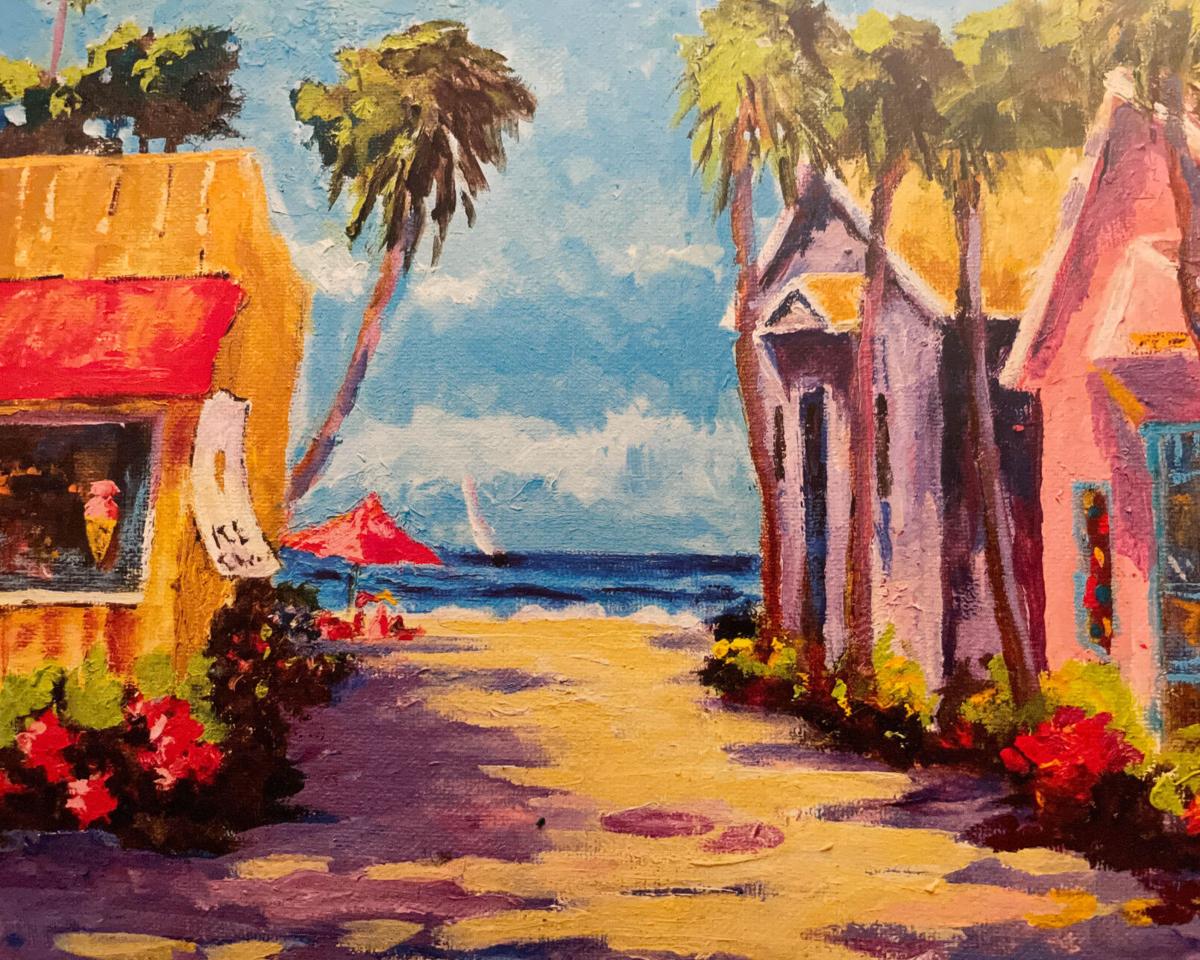 The Plein Aire Cottage Artists is comprised of a trio of painters dedicated to preserving the historic cottages of Indian Rocks Beach.

Mary Rose Holmes, left, one of the founders of Plein Aire Cottage Artists, poses with IRB Action 2000 President Diane Flagg at her beachfront studio in September.

Mary Rose Holmes, one of the founders of Plein Aire Cottage Artists, poses with her painting titled “Enchanted Paradise” that she donated to IRB Action 2000 for last year’s Oktoberfest.

The Plein Aire Cottage Artists is comprised of a trio of painters dedicated to preserving the historic cottages of Indian Rocks Beach.

INDIAN ROCKS BEACH — For anyone who’s recently made the leisurely drive down Gulf Boulevard in Indian Rocks Beach, tall, beachfront condos and stilted Intracoastal homes have become a common sight.

But when visitors, residents and travelers with a keen eye take a closer look at the IRB landscape, they’ll find a community dotted with dozens of classic “Old Florida” style cottages, tiny, quaint abodes with colorful facades and even more colorful histories that give the 2-mile-long island its quaint, beachy vibe.

With dozens of the cottages having already been torn down to make way for the aforementioned bigger buildings, a trio of local artists — Mary Rose Holmes, Violetta Chandler and Helen Tilston, or the Plein Aire Cottage Artists — have for the past 20 years released a calendar featuring a dozen of the historic homes. It’s a passion project that raises money for local causes while preserving an important part of the city’s history on canvas.

“We met at an art class and Violetta was our teacher and she chose us to go with her to paint the cottages,” Holmes recalled last fall from her waterfront home/studio near the Eighth Avenue beach access. She noted that the other two cottage artists have been out of the country since the pandemic started.

“Over the years we saw the condos going up and the cottages going down, and I knew we couldn’t stop it. But if we painted them, we could at least have a memory of them that would be preserved forever.”

Holmes, an accomplished painter who said she’s been an artist since she was 5 years old, said when they first started, they “were selling paintings off the easels before they were even done!” From there, the Beach Art Center asked them to do a show of their works. “Everyone loved it and we made money,” she recalled, “so we reached out to IRB Action 2000 because we have the same mission — preserving the community.”

According to IRB A2K President Diane Flagg, the cottage artists’ mission aligned with the grassroots nonprofit.

“We all want to keep the charm of IRB because we know it can’t stay the same forever,” Flagg said, noting the PAC trio is “helping our efforts to promote saving the cottages” by “working in tandem” with them.

Indeed, during the recent Oktoberfest, IRB A2K’s biggest annual event, Holmes donated a painting titled “Enchanted Paradise,” with the proceeds to be used for the organization’s ongoing beautification efforts. “It’s been a nice association because we all love this community,” Flagg said.

With the Plein Aire Cottage Artists 2022 calendar already in print and for sale at places like the Beach Art Center, the Indian Rocks Historical Museum and online, Holmes said the trio will continue to raise awareness for the cottages through their work, vowing never to do a duplicate painting and to never quit.

“They think we buy them and save them, but no, that’s not true at all,” Holmes said of the subjects of their work, which is done outside in open air, often with curious onlookers serving as a live audience.

According to Flagg, the PAC’s efforts to preserve the remaining cottages are working.

“Some people have bought cottages and kept them original,” she said, adding that when people see the Plein Aire Cottage Artists out in the community, they recognize them because “they’ve become kind of famous!”

As a former commissioner, Flagg said the proliferation of short-term rentals has been frustrating, but she believes city leaders as well as their organizations are doing their best to preserve IRB’s small-town charm. “I think for a small town our city leaders listen to people and care about keeping things in original condition,” Flagg said. Holmes praised the current commission for being “for the people, of the people and about the people. We’re trying to preserve the history any way we can by encouraging people and thanking them for their efforts, and the City Commission has been wonderfully supportive, and you need that.”

For more information on the Plein Aire Cottage Artists, visit the group’s Facebook page or  helentilstonpainter.blogspot.com.