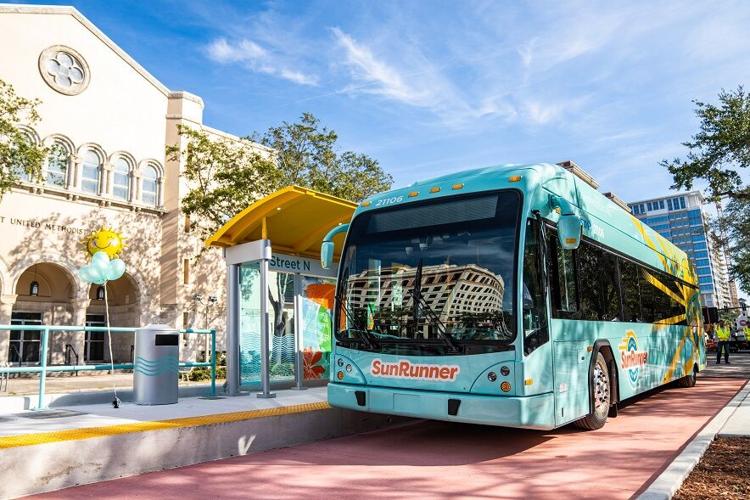 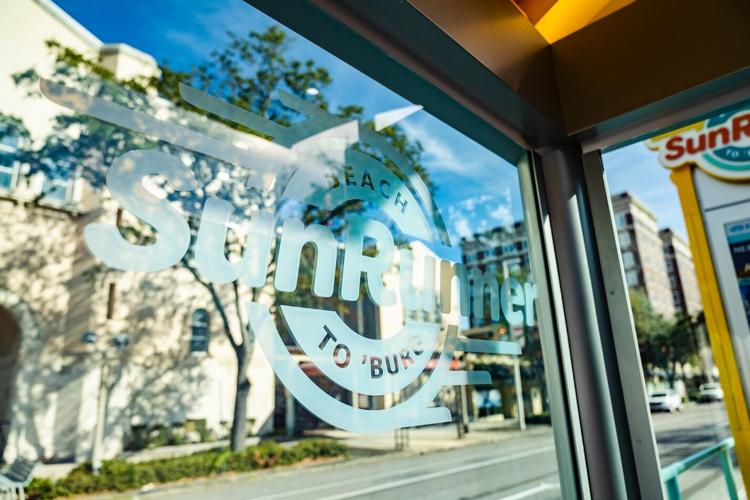 The city’s disfavor with the SunRunner project grew out of an ongoing feeling that Pinellas Suncoast Transit Authority officials had ignored most of city’s requests, such as a desire for bus ridership counts and for smaller buses to be utilized.

In June 2019, St. Pete Beach commissioners passed a resolution opposed to SunRunner coming onto the island and requested the Federal Transit Administration put the project on hold.

PSTA needed the St. Pete Beach leg of the route to qualify for federal funding; its ace in the deck was that SunRunner would run along Gulf Boulevard, which is a federal highway, so the city could not prevent the buses from utilizing that route. However, PSTA officials agreed to SunRunner turning around at the County Park at 46th Avenue, rather than at the Don CeSar hotel on 34th Street. It also agreed to use 40-foot buses instead of the 60-foot buses the city opposed.

Starting Oct. 21, hybrid electric buses will travel 10.3 miles along special BRT designated lanes, west along 1st Avenue North and east along 1st Avenue South. Passengers waiting at one of the 16 stops will reportedly be picked up every 15 minutes during the day. According to PSTA, there are no dedicated bus lanes along beach corridor, though.

SunRunner buses will arrive every 15 minutes from 6 a.m. to 8 p.m. Sunday to Saturday. Evening bus service will run every 30 minutes from 8 p.m. to midnight. According to the PSTA, travel time from downtown St. Pete to St. Pete Beach should take 35 minutes.

During a Sept. 12 meeting of the St. Pete Beach City Commission, Commissioner Mark Grill noted he received an invitation to SunRunner’s grand opening in St. Pete Beach on Oct. 21, and wondered if it was proper protocol to attend.

A vocal critic of the PSTA, Commissioner Melinda Pletcher asked, “Is it treasonous for us to go to this ribbon-cutting? To me I felt that it was. … We actually made the statement, we submitted our proclamation that we were not in support of it coming to our city, so I think that attending these functions…”

“To be a little hypocritical,” Commissioner Chris Graus said.

“It is,” Pletcher added.

Mayor Al Johnson noted he attended the unveiling and groundbreaking of SunRunner service, which gave him the opportunity to tell PSTA officials “you’ve got to stop looking at us as a thoroughfare. … When you get to the city limits dump everybody and get out of Dodge, let us handle it. And that’s what the Freebee is doing for us.”

He said he will attend the inaugural run because “I want to see what they are doing to us.”

Pletcher said St. Pete Beach is becoming a “busing mega-center, because our numbers qualified for them to get the (federal) money. That is the only reason they used us for their own project and I don’t support it.”

Commissioner Ward Friszolowski said he plans to attend the ribbon-cutting “because it’s going to be here whether we want it to be or not, and I want to experience it, see it. Will it be good, will it be bad? I think it’s yet to be seen.”

In other action concerning the PSTA, in a 4-1 vote commissioners passed the fifth addendum and renewal to the Suncoast Beach Trolley Agreement for fiscal year 2023. Pletcher voted against the agreement.

City Manager Alex Rey explained the agreement scales down the level of service with the introduction of the SunRunner.

The changes reflect a 38% reduction in the CAT bus service. The SunRunner and CAT ridership will be monitored to determine if additional CAT service reductions are necessary, he added.

The city manager noted the delivery of DART services has changed significantly during the past two years due to the COVID-19 pandemic. PSTA partnered with various rideshare services to provide door-to-door service for disabled customers. This past year, the DART service saw a substantial increase in demand, providing approximately 1190 trips requested by the residents of St. Pete Beach. This increased the cost for fiscal year 2023 DART service to $19,284.