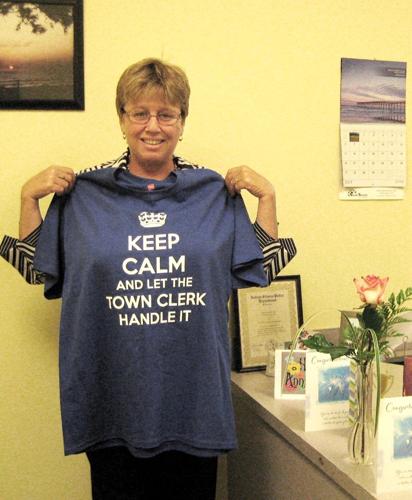 Redington Shores Town Clerk Mary Palmer celebrated with a T-shirt in 2014 when she marked 30 years on the job. She resigned under pressure last week.

Redington Shores Town Clerk Mary Palmer celebrated with a T-shirt in 2014 when she marked 30 years on the job. She resigned under pressure last week.

Palmer has resigned. She was faced with a choice between signing a separation agreement from the town, which would give her a full package of benefits for her service, or choosing to stay on and most likely be ousted with no benefits by a commission majority that wanted to replace her.

No specifics were given, and her “forced resignation,” as one resident termed it, left a number of unanswered questions, along with plenty of angry residents who came to show their support for the popular town clerk.

At the start of the meeting, the topic was moved to the top of the agenda, in recognition of the large crowd present for that discussion. Vice Mayor Cinda Krouk chaired the meeting in place of Mayor MaryBeth Henderson, who was absent for unknown reasons.

Town Administrator Jeff Shoobridge said at the beginning of the discussion that Palmer had informed him she thought it was time for her to “move on.” Shoobridge said Palmer has been with the town for 38 years, which justifies giving her the maximum allowable severance package under Florida statutes. That means she would get 20 weeks of full salary and benefits along with payout of all accrued vacation and sick time.

The commission was being asked to ratify the separation agreement that Palmer had signed.

In response to questions raised by residents, Town Attorney Rob Eschenfelder said he wanted to make it clear that it was Palmer’s “personal choice” to sign the agreement. He also said individual commission members “had expressed their concerns and criticisms of the clerk’s performance” to the town administrator. Those discussions led to the creation of the separation agreement.

The commissioners said nothing at the meeting about what those “concerns and criticisms” were. They listened politely to citizen comments but did not express their views.

More than 20 residents spoke at the meeting, and all but one strongly supported Palmer. Many said they could not understand why the clerk was being forced out after years of dedicated service.

“What is going on here?” asked John Strakele. “It doesn’t feel right.” He said it’s important to have “a person like Mary Palmer who has the knowledge of where this town’s come from.”

“I am appalled and disappointed in what you all have done,” said Donna Waldman. “We can’t understand why you would give up the intelligence of this woman who has been here and knows everything about the city. She’s amazing.”

Some residents criticized actions taken by commissioners elected in the past few years to change out city staff, replacing employees who they said served the town well.

Andre Bourgeois said it was strange to him that the commission has gotten rid of many of the employees he knew when he moved here five years ago.

“It’s been a domino effect. It makes no logical sense to me. I’m just very, very, very disappointed that you guys would go this route.”

Nancy Kapper said she was “sad and appalled that the present commission is forcing such a valuable employee to resign” and praised Palmer as “extremely knowledgeable regarding the inner workings of the town.” She went on to say that commissioners over the past three years have fired or requested the resignation of many employees including two building inspectors, several deputy clerks, and volunteers who served on town committees.

Saying she was speaking for the majority of the residents of Redington Shores, Kapper said, “We appreciate Mary’s dedication and her commitment to our town. She will be replaced as town clerk, but no one will ever take her place.”

Leslie Coppock, who bought a home here together with her parents in 2005, said Palmer was a tremendous help in answering all their questions about the town. She told Palmer, “I’m sad to see you go. I appreciate all your service. My parents adored you,” said Coppock.

Former Commissioner Lee Holmes said the action against Palmer seemed like “a midnight massacre.” He said the severance package she is being offered was well-deserved, in keeping with her job performance over the years “which truly was outstanding.”

“She was asked to leave,” said Palmer’s sister, a resident of Seminole who used to live in Redington Shores.

Several residents also expressed concern that the day-to-day operation of town hall will suffer after the sudden vacancy in the town clerk’s office. Harold Goldman told Shoobridge, “If you’re not ready to take over Mary’s role, then we need to keep her.”

After the public comment session, commissioners were ready to vote on whether to approve Palmer’s separation agreement.

“Before I vote, I want to say that this agreement is being executed in the best interests of all the parties concerned,” said Commissioner Bill Krajewski.

The vote was 4-0, with Krouk and Commissioners Krajewski, Jennie Blackburn and Ken Later in favor, and Henderson absent.

Palmer spoke after the vote.

“I would just like to thank everyone for their kind words,” she said. “I was raised in this town, I love this town, I’ve put my all into this town. It’s been a pleasure working with you and for you. Thank you.”