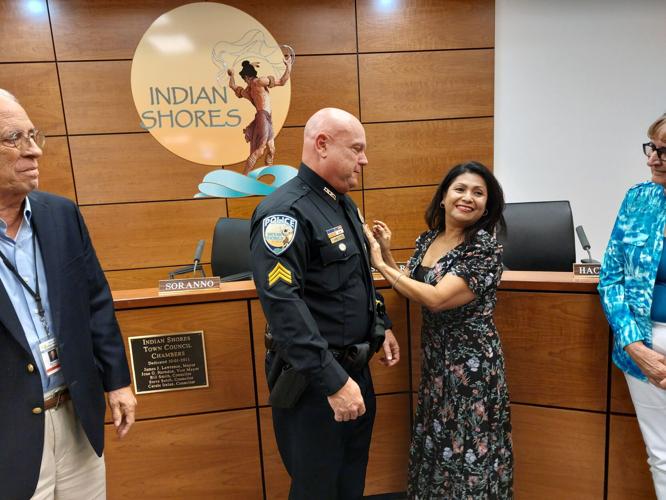 Cpl. Thomas Goettel's wife, Glenda, pins a badge on him after he was promoted to patrol sergeant. 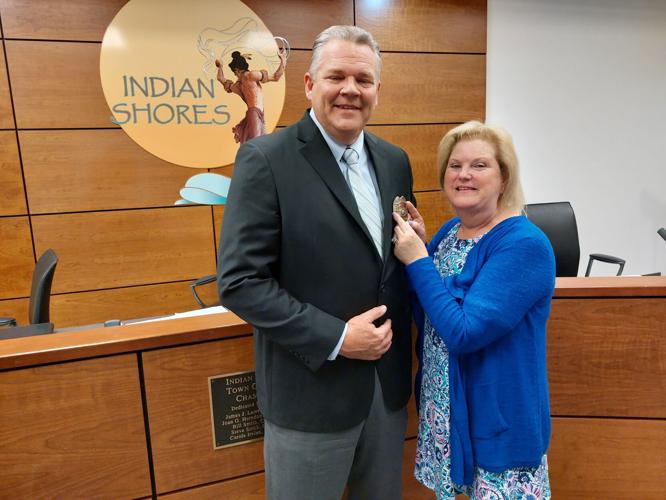 Officer Alan Hill was approved as a reserve police officer with ISPD. He is shown with his wife, Suzie. 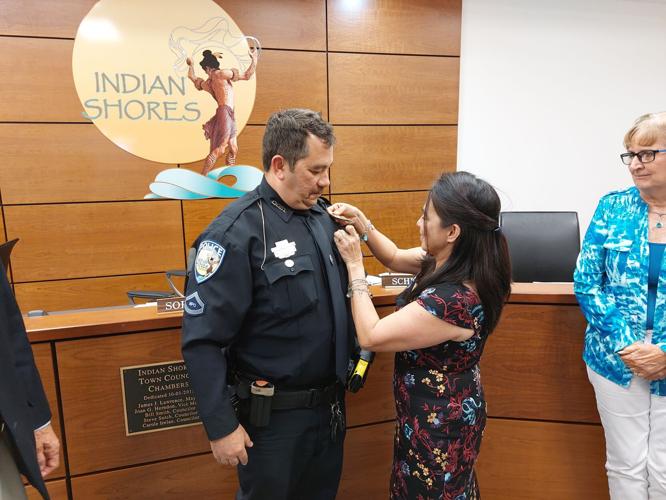 Officer Michael Hansen was promoted to the position of master patrol officer. Hansen’s wife, Lorelie, pinned his badge on him.

Cpl. Thomas Goettel's wife, Glenda, pins a badge on him after he was promoted to patrol sergeant.

Officer Alan Hill was approved as a reserve police officer with ISPD. He is shown with his wife, Suzie.

Officer Michael Hansen was promoted to the position of master patrol officer. Hansen’s wife, Lorelie, pinned his badge on him.

INDIAN SHORES — The April 12 Town Council meeting opened with smiling faces as Indian Shores Police Chief Rick Swann received unanimous council consent on a new hire and two promotions of officers in the department. The council gathered in front of the dais to welcome the new hire and support the officers being promoted at the meeting.

“I had the pleasure of working with Alan and his father, sister, and daughter at the Hillsborough Sheriff’s Office,” said Swann.

Hill retired as a Patrol Division major in 2018 after 29 years of service. Currently he is the security director and emergency manager for TECO Energy for the Tampa Bay region.

Once Hill was sworn in, his wife Suzie pinned his badge on his uniform as part of the ceremony. “We are sure (Hill) will be a valuable asset to our agency,” said the chief.

Next, Cpl. Thomas Goettel was promoted to Patrol Sergeant at a salary of $53,826. Sgt. Goettel’s wife, Glenda pinned his badge on him.

The final promotion of the evening was Officer Michael Hansen to the position of Master Patrol Officer. Although the promotion had been approved at last month’s meeting, the ceremony was held at the April meeting along with the other officers. Hansen’s wife, Lorelie, pinned his badge on him as well. Hansen’s MPO annual salary will be $56,347.90 effective May 7.

The council also authorized Swann to attend the Florida Executive Development Training Seminar in Key West from May 20-29. The cost of the training, including fees, lodging, travel and per diem, was approved at $3,200.

The police department is currently collecting “shelf-stable” breakfast items until May 11 to donate to Feeding Tampa Bay. Donations of cereal, pop-tarts, granola, breakfast bars, etc. can be dropped off Monday through Friday from 8 a.m. to 4 p.m. at the department, located on the second floor of the municipal building, or in the designated container on the third floor lobby near the library.

Officer Alexandra Holt is coordinating the event. ISPD’s original goal was to “cram a cruiser” with donations but now they are hoping to double that amount and cram two cruisers

Last month, the approval of the rosters for various boards and committees was postponed until a change in the code adding more alternate and citizen members of the Planning, Zoning and Building Committee could be addressed. At this month’s meeting that was resolved.

By unanimous vote of 5-0, the council approved a new ordinance that increases the number of alternate members to the committee from three to five members and from two to four citizen member alternates.

The council unanimously approved the purchase of a surveillance camera for the town monument site at Tiki Gardens at a cost of $12,067.68. The purchase was recommended by the ISPD to deter potential vandalism. The town will perform the electrical work involved.

Approval of the surveillance camera is contingent on Pinellas County’s authorization for the town to retain parking fee revenue from Tiki Gardens parking to cover the cost of the camera.

A change order for soil treatment and fertilization at the monument site also passed unanimously 5-0. The cost is $1,171.50.