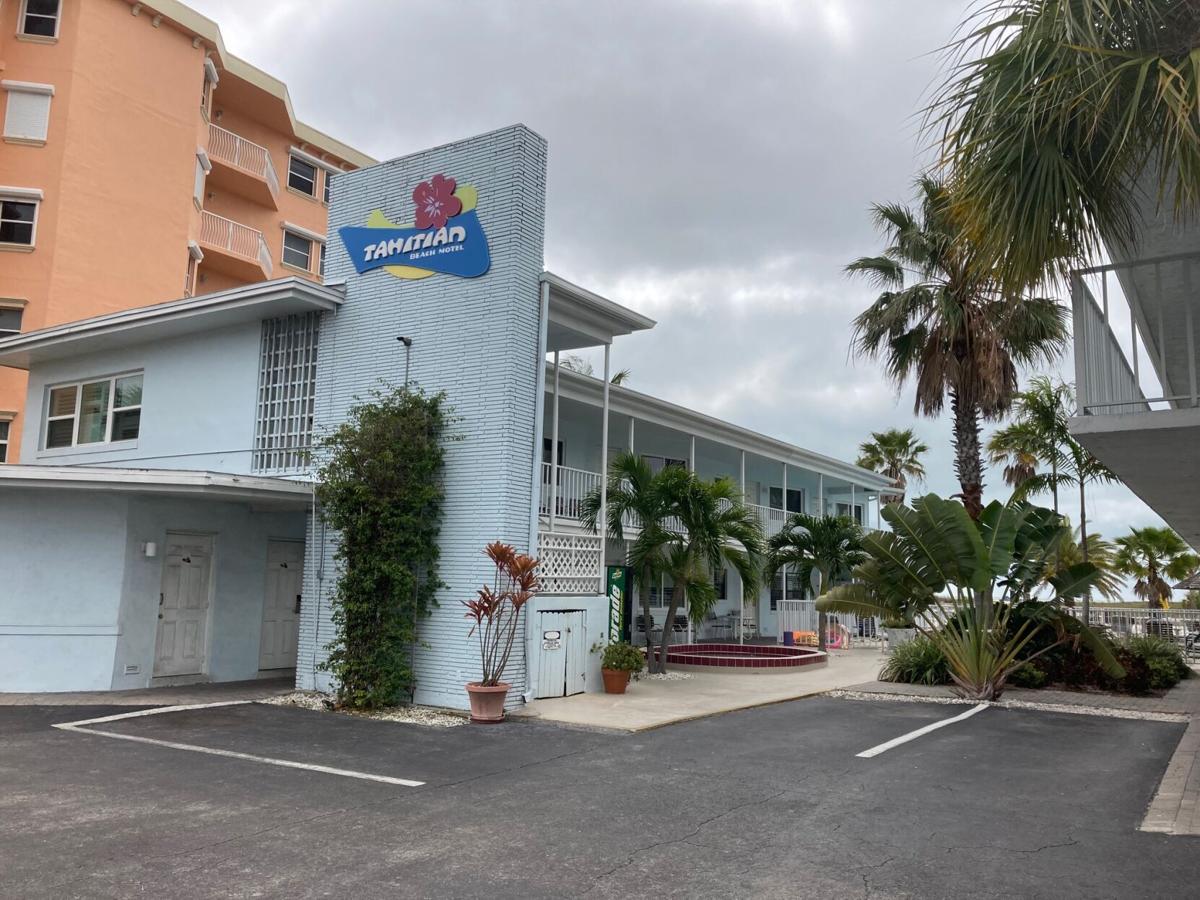 The Rapchak family bought the Tahitian Resort in December and is in the process of renovating it. Now, it wants the city’s permission to use the public beachfront property to the west of the hotel.

The new owners of the Tahitian Resort plan to add a raised pool and tiki deck to the 60-year-old hotel.

The Rapchak family bought the Tahitian Resort in December and is in the process of renovating it. Now, it wants the city’s permission to use the public beachfront property to the west of the hotel.

The new owners of the Tahitian Resort plan to add a raised pool and tiki deck to the 60-year-old hotel.

TREASURE ISLAND — Hoteliers and developers traditionally come before the City Commission to discuss their project and request site plan approval.

However, during a Sept. 20 work session, commissioners were surprised when the legal counsel for the Tahitian Resort, at 11320 Gulf Boulevard, asked board members to weigh in on whether they would approve requested changes to a licensing agreement that would allow the hotel to utilize city-owned beach property behind the resort, without first seeing a detailed site plan.

St. Petersburg attorney David Delrahim said hotel owners wanted to give commissioners a chance to discuss and provide direction regarding issues with the license agreement before the site plan is drafted. Once the hotelier knows what items city commissioners favor or reject, they would submit a formal site plan to the planning and zoning department and eventually the city commission.

City Attorney Jennifer Cowan reminded commissioners that hotel owner-manager Lisa Rapchak and family have been renovating the Tahitian Hotel and other hotel property they acquired since December 2020. She explained they now desire to enter into a license agreement with the city to add amenities to the public beachfront property, adjacent to the western property line of the Tahitian Hotel, extending to the Beach Trail.

Cowan told commissioners the hotelier expressed a desire to revise many of the traditional terms of the license agreement, and address the board at the work session to obtain a better understanding of the type of improvements the commission would find acceptable.

The hotelier supplied a simple drawing depicting amenities that would be added to beach area at the rear of the property.

“I definitely was hoping to hear more of the conceptual plan. … It’s hard for the commission to jump into a license agreement that is licensing out our own public property, when we don’t really have a great understanding what project will actually look like,” said Mayor Tyler Payne. “I would feel more comfortable if I had a little better idea of what was planned.”

Attorney Delrahim said they asked for the meeting to see if the hotel and commission were on the same page, as to what can be done on the beach area.

Commissioner Saleene Partridge said the commission “is not really in business of approving things without having a clear conception of what they are. ... Without anything more specific (in a site plan) I would have a very hard time assigning a yea or nea to something specific, without seeing specifically what we’re looking at doing.”

Drawings of the city-owned beachfront area, behind the hotel, show a splash pad in the shape of a pirate ship, shaded seating areas, a covered bar seating area with small kitchen, and a trailer that would contain restrooms. A shuffleboard court is already on the property. Since the amenities will be on a portion of the city-owned beach, they would all be available for use by the public.

While Partridge noted she liked the splash pad concept, she would not approve any part of the license agreement without first seeing what the entire project will actually look like in a site plan.

She added, “I’m fine discussing it, but I’m not comfortable approving something on a hypothetical and they bring it back later … because I’ve seen that not work out in the city’s favor.”

The hotelier’s attorney told commissioners his client wanted to make sure the commission approved of changes to the licensing agreement before they spent a lot of money completing the design phase.

Commissioners, on the other hand, repeatedly noted they would not make concessions, or voice approval or disapproval, to items in the licensing agreement before seeing a site plan.

City Attorney Cowan noted the beach area behind the hotel is considered nonconforming, because part of the property is in a preservation area that has restrictions on impervious areas. Cowan said the question is, does the commission want the property brought into conformity, by removal of the impervious area created by the concrete pad?

“Generally, the city wants a property to come into compliance with existing regulations,” she advised.

Under one of the changes proposed to the licensing agreement, the hotelier wants to retain the walkway and use its 12-inch-thick base to bolt and strap down a trailer used for restrooms.

Delrahim said it would be “extremely costly” for this client to remove the concrete pad.

Payne noted “we are investing a lot of money to make our beach look more like a beach and preserving the sand, making it a really great destination. … I’d like to see more sand, less concrete. We need to come into compliance with our own rules, especially since it is city property. I think it’s only fair and justifiable. If we are allowing that property to be improved and it’s our property, we should play by our own rules.”

However, Delrahim noted in the site plan review perhaps just a portion of the walkway could be removed to still allow a trailer to be strapped down.

Partridge echoed the sentiments of a majority of commissioners who not only weren’t in favor of allowing the hotel to keep the concrete walkway in place, they also did not like the idea of installing a trailer on the beachfront. Commissioners feared there would be no way to remove the trailer in the event a hurricane threatened.

The hotelier’s attorney noted specialized straps that withstand hurricane force winds could be used to bolt down the trailer, or a crane could be brought in to remove the trailer.

The developer will continue discussions with staff and eventually submit a site plan to the planning and zoning department for review and then the city commission for potential approval.