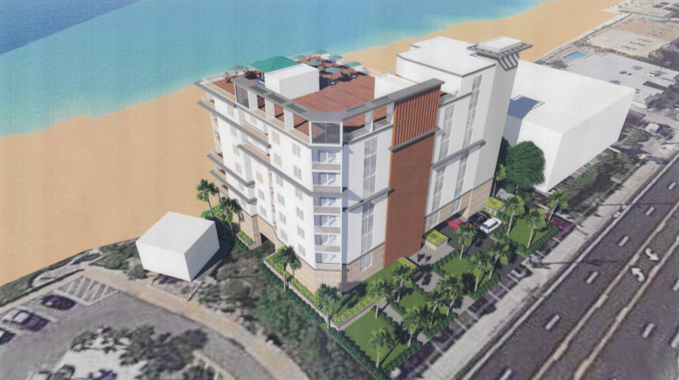 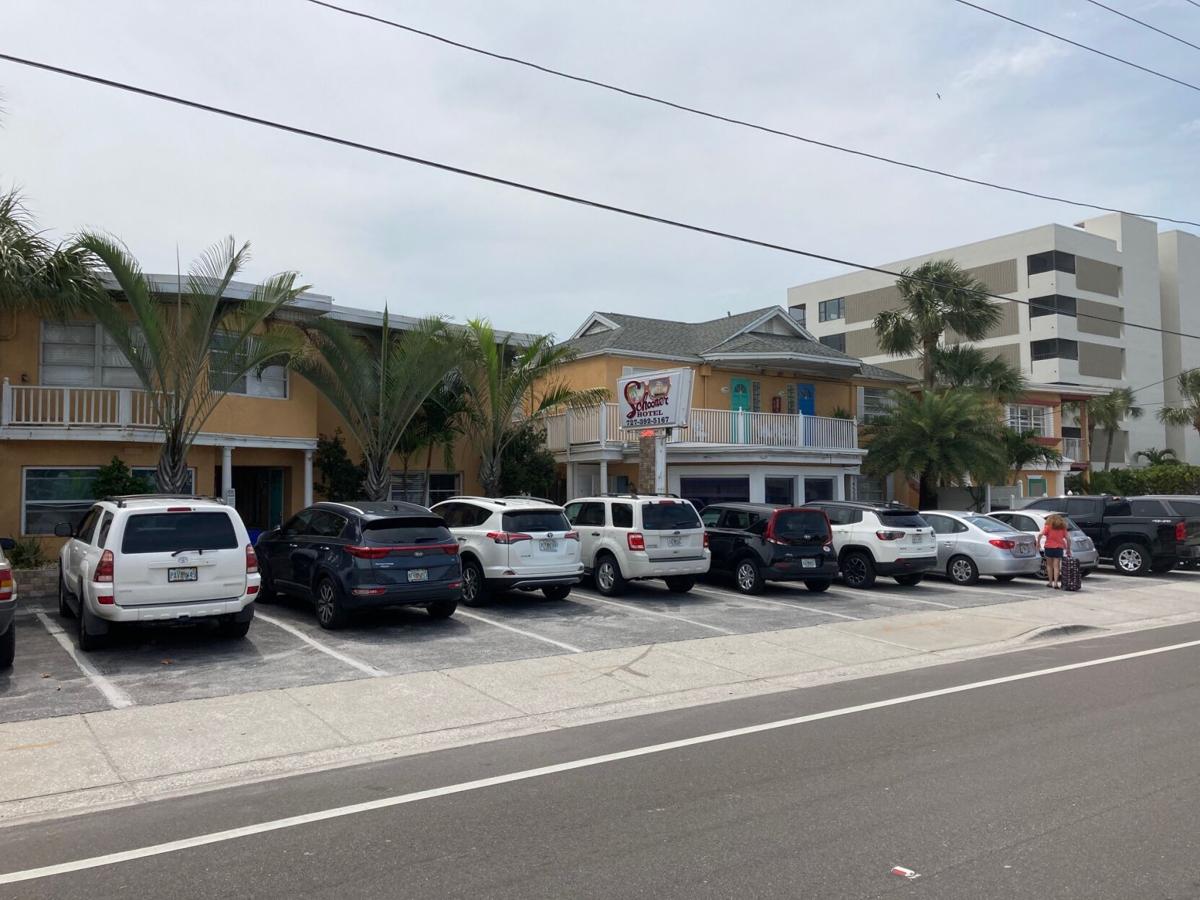 The aging Schooner Hotel would be replaced with a seven-story resort according to plans before the Madeira Beach city commission. 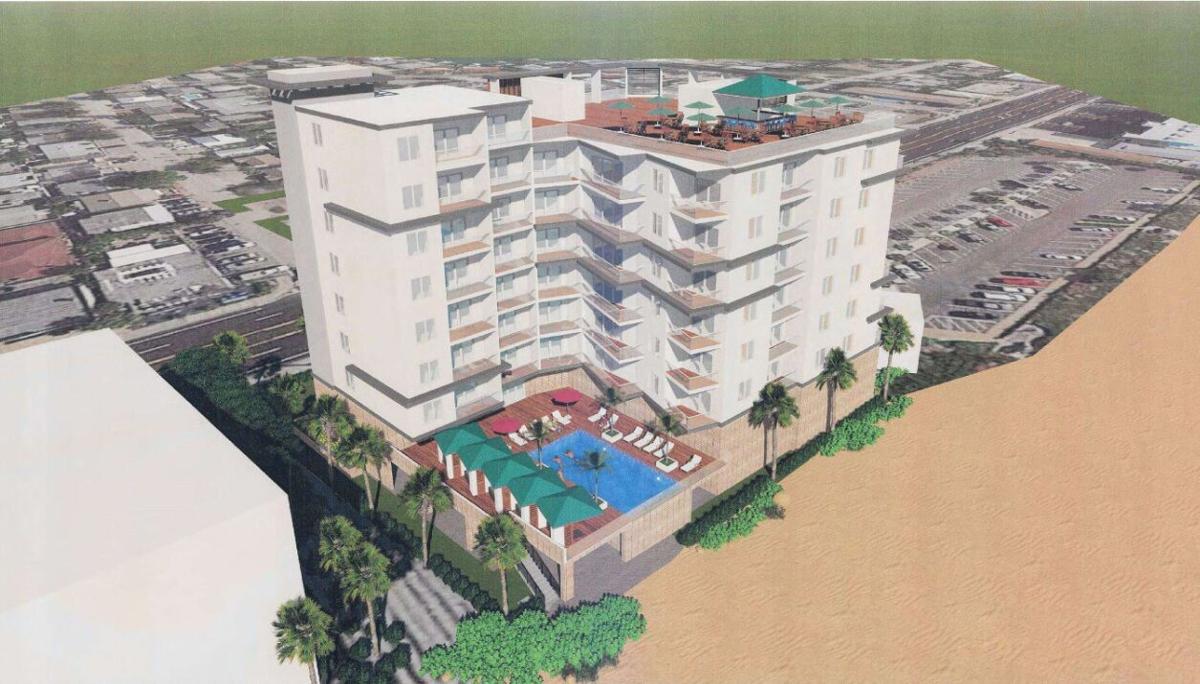 MADEIRA BEACH — In a close 3-to-2 vote, the city commission approved Planned Development (PD) zoning for the expansion of the beachfront Schooner Hotel on Gulf Boulevard at 146th Avenue. The vote, on first reading, took place after a two-hour hearing in which city staff, the property developer and owners, and interested citizens spoke at the April 14 commission meeting.

The new hotel, which replaces an aging hotel at the site, had first been proposed as a Planned Development in early 2019. At that time, it was touted by the architect John Bodziak as “a standout, landmark hotel along the lines of the Vinoy and Don Cesar.” The plan was for a five-story, 40-unit hotel with beachfront restaurant/bar, and a two-story building across the street with 16 hotel suites and retail space. A footbridge over Gulf Boulevard would connect the two properties.

After a two-year delay due to the city needing to revise its PD procedures and then the COVID pandemic of 2020, the developer is ready to go forward with a revised plan.

The latest proposal is for a mixed-use development in two phases, according to a memo by Community Development Director Linda Portal. The first phase would be a seven-story beachfront building with a 56-room hotel and rooftop restaurant, with surface parking under the building and additional parking across the street.

The second phase, which the developer said would start as quickly as possible, would include up to two levels of parking over retail space on the east side of Gulf Blvd. The previously proposed footbridge over the boulevard is replaced with a normal crosswalk.

The city’s planning commission voted 7-0 to recommend approval of the PD zoning and associated concept plan.

Jeff Beggins, a co-owner of the hotel project, Realtor and 20-year local resident, told the commission he wanted to do something special with the property.

“We put a lot of thought, energy and love behind this project,” he said. “We took some time to redesign and contemplate what would be the coolest thing to do.”

The hotel building has gone from a square box shape to L-shaped to create a view corridor for residents who live on the south side of the Arie Dam condo complex next door, Beggins said. Some rooms were lost in the reshaping, he said, “so we added two floors,” to keep the number of rooms at 56.

Beggins also pointed out that the planned 56 rooms are only 14 more than what currently exists in the old hotel buildings on the site. That means there would not be a significant increase in overnight parking needs.

“We wanted to combine compatibility with the neighborhood with the functionality of the building,” he said. “We came up with a very attractive building, with a more sophisticated approach, and got away from the former Don CeSar fancy, glitzy appearance.”

Comments on the Schooner hotel Planned Development from citizens at the meeting and by email were overwhelmingly positive.

“I like everything I hear about the project,” said resident Nicholas Newbury. “It’s taking the old dilapidated units that don’t have the highest-quality people using them and replacing that with 56 new modern beautiful ones. I feel the guys doing the project have done a lot for the town, and I’ve got full faith in them.”

Jim Everett called the proposed hotel “beautiful,” and said it’s good to see a new beachfront hotel. “We haven’t really had a nice hotel on the beach since they tore the Holiday Inn down many years ago. So, I think it’s a fantastic addition, particularly in light of what’s there now.”

Many who emailed comments supported the project and were glad to see redevelopment taking place in the city. “I am very excited to see all the improvements in my beach town. Redevelopment is necessary to improve the quality of life,” said Michelle Christmas.

Among the negative comments, one person said, “We do not want to be another Clearwater Beach.” Others objected to the increased traffic congestion the development would bring. “We are already experiencing congestion on Gulf Boulevard. This development will just increase problems for our residents. The restaurant and bar will bring more traffic,” said John and Theresa Spooner in their email.

The commissioners’ reaction to the hotel’s redesign was divided. This commission is almost completely changed out from two years ago when the Schooner project was first presented, with only Commissioner Nancy Hodges still on the board from that time.

Commissioner Helen “Happy” Price said she liked the more ornate and decorative style of the previous design and wanted at least a more Mediterranean look like many of the newer buildings in Madeira Beach.

“I don’t want another big cube and modernistic look,” Price said. “I am excited about the old design. I thought it was a great centerpiece for Madeira Beach.”

Price agreed with Hutson that potential noise from the bar was an issue. She also said the Planned Development process was intended to allow negotiation between the commissioners and the developer to address these types of concerns from citizens.

Mayor John Hendricks said he was willing to go with the Schooner hotel redesign “exactly like it is,” and Commissioner Doug Andrews also wanted to “push forward with it.”

The vote was 3-to-2 in favor of the Planned Development zoning needed for the project to move forward to second reading. Hendricks was joined by commissioners Andrews and Hodges in voting yes. Commissioners Hutson and Price were opposed.

COVID-19 cases and deaths on downward slide in Pinellas County

Florida Department of Health reported yet another week with decreasing numbers of COVID-19 cases and deaths in Pinellas County. From May 10-16, DOH reported 656 new cases, bringing the count to 80,603. Sixteen more people died, upping the death toll to 1,649.