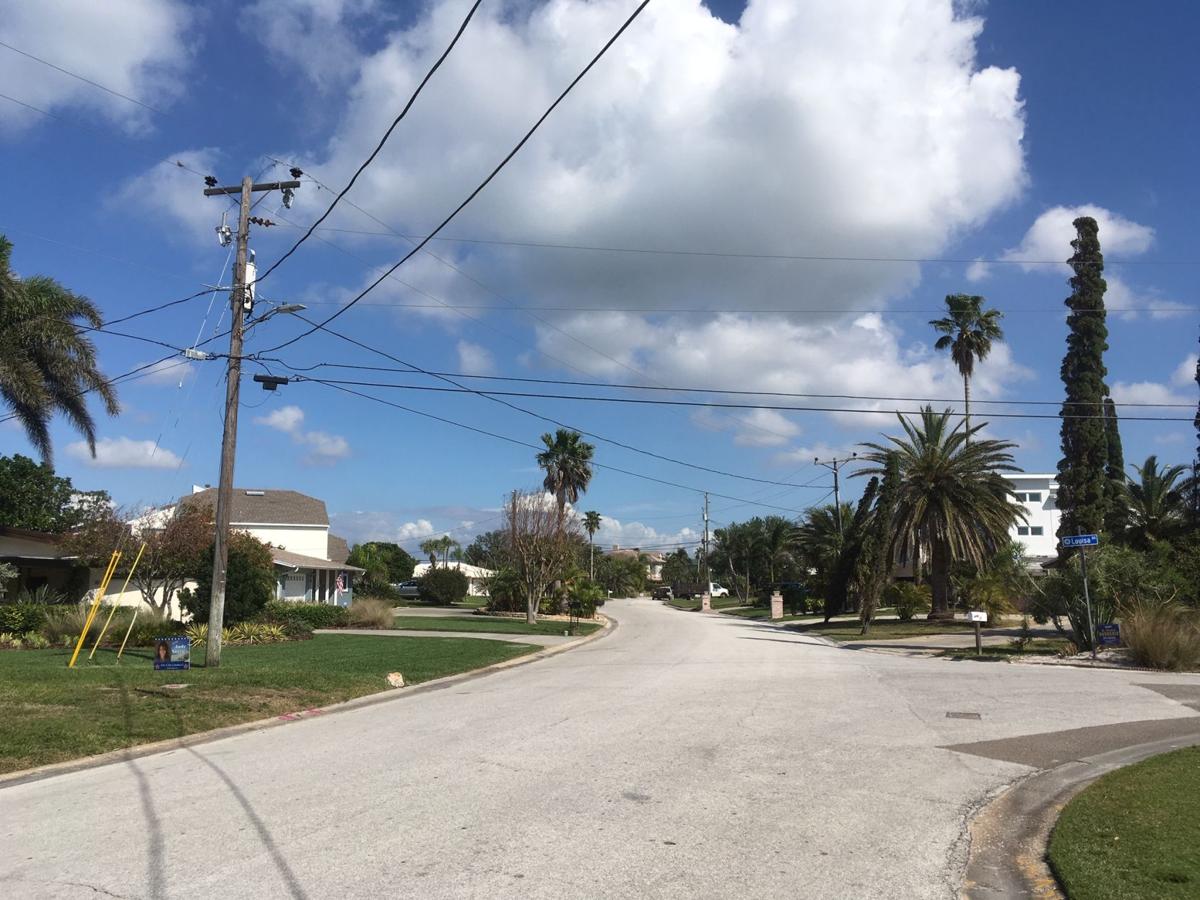 The unsightly glut of overhead wires in a Belleair Beach neighborhood is now a thing of the past. These photos show a dramatic difference before and after the undergrounding work on Belleview Estates Island, the area at the end of 22nd Street. The new look includes solar streetlights with a patented wraparound solar panel, which can be seen in the photo at right. Belleair Beach is the first in the county, and one of the first municipalities in the state, to install solar streetlights. 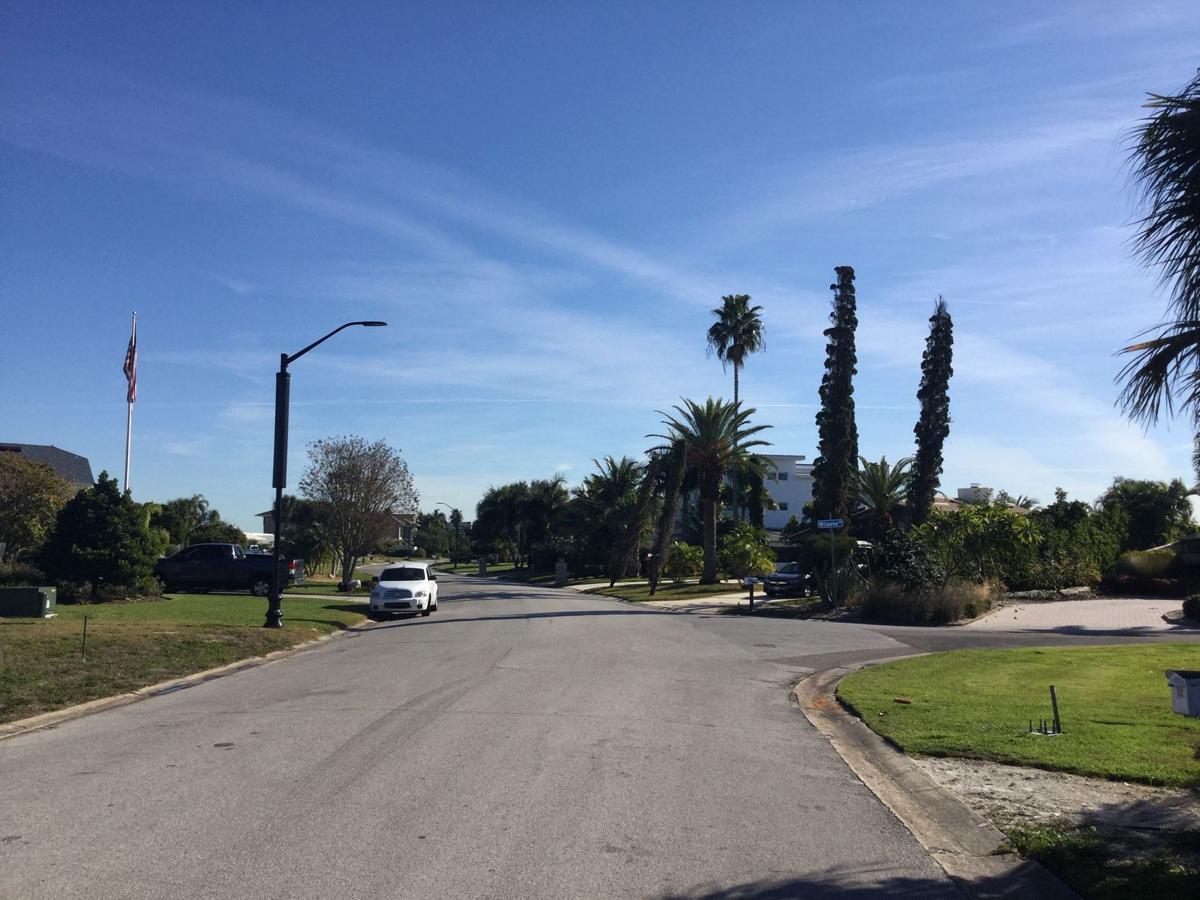 The unsightly glut of overhead wires in a Belleair Beach neighborhood is now a thing of the past. These photos show a dramatic difference before and after the undergrounding work on Belleview Estates Island, the area at the end of 22nd Street. The new look includes solar streetlights with a patented wraparound solar panel, which can be seen in the photo at right. Belleair Beach is the first in the county, and one of the first municipalities in the state, to install solar streetlights.

BELLEAIR BEACH — City Council members, most of whom were elected on a pledge to complete a long-awaited neighborhood utility undergrounding project, were told at the Feb. 3 council meeting that the job is finally done.

The wires are underground and the lights are on, said City Manager Lynn Rives, announcing the city’s Bellevue Estates Island neighborhood now has Florida’s first major solar lighting system. The neighborhood of 115 homes is over the 22nd Street bridge on the Intracoastal Waterway.

The project’s completion is a major victory for the council members, elected on a commitment to get the undergrounding job done. And a win for the neighborhood residents, who have been determined for many years to make the undergrounding happen and who agreed to be assessed for its $2.2 million cost.

Rives had given updates on the project’s progress for months. In November, he said “the demolition” is coming. All the old poles and wires were coming down, at last accomplishing the longtime goal to eliminate the ugly glut of overhead wires.

Rives’ February status report, prepared with Council Member Glenn Gunn, was a victory statement, where he gave the benefits of the undergrounding, the project’s background, achievement milestones, successes, lessons learned, and what’s next.

The project officially began in March 2017 when the city enacted legislation to allow special assessments in a portion of the city. The following two years included the petition process, setting up the financing, and detailed planning of the project. Finally, in April 2019, workers broke ground.

“This was a very successful project,” Rives said. The transition of all utilities to underground was accomplished with no disruption to existing services. He said the residents are very happy with it, and the project is at least $200,000 under budget.

The big change, he said, was the removal of 170 overhead wires that improved the aesthetics of the area. “It got rid of the wires,” Rives said. “It looks completely different.”

The decision by the residents to go with solar streetlights has made the project a trendsetter in the state. Rives said no city in Pinellas County has solar lights, and only a few “test lights” have been installed elsewhere in the state.

The design of the streetlights, from Clear World in Louisiana, includes a subtle wraparound solar panel that takes the place of older-style protruding flat panels.

The city partnered with the residents to pay the extra cost of solar streetlights, with the city contributing the cost of standard lighting. The 31 solar LED lights operate on an independent power system and are programmable. Rives said that after the 10-year warranty period, “our only real cost may be replacing batteries regularly.”

A major benefit of the undergrounding project is that it creates a “playbook” for similar projects in other city neighborhoods. Harrison Avenue is looking into undergrounding their utilities, Rives said, plus other projects like stormwater capital improvements can benefit from lessons learned.

Rives also mentioned that he is planning to get quotes to have the roads repaved on Bellevue Estates Island. That work was delayed because of the undergrounding.

Mayor Joseph Manzo declared the undergrounding project “a success by all evaluations.”

Gunn has been a leading advocate for the undergrounding effort, and managing and monitoring its progress. He told the Bee in a comment made after the meeting that “the project is a noteworthy example of the city’s focus on safety, fiscal responsibility and sense-of-community. The project has also sharpened the city’s abilities to effectively undertake and manage similar projects of this type.”

Gunn said, “City Manager Lynn Rives has done a masterful job of keeping this project on track and under budget.”

Dune walkovers to be replaced

The city’s four beach walkovers, at 21st Street, 25th Street, Howard Drive and Harrison Avenue are going to be replaced, at the county’s expense, Rives said. The replacement cost will come out of Penny for Pinellas sales tax money, he said.

Rives said the new walkovers have been “a long time coming.” He said they were built over the sand dunes, and now they are mostly under the sand.

Manzo said he had a major concern about whether the county could withdraw the funding for the beach accesses, based upon an earlier comment made by the fire chief about the county failing to follow through on planned fire equipment funding.

Rives said the county “has been funding this type of project for many, many years” and “there’s never been a history of their not paying.”

“It’s in their budget this year, and I don’t see it going away,” Rives said.

The council unanimously voted to enter an interlocal agreement with the county for replacement of the dune walkovers.

Last year’s main event, Festival by the Sea, will be moved from September to November, when the weather is cooler, VanScoyoc said. Added this year will be a 5K run May 3, Music in the Park in June, and a beach party in July. A boat parade and tree-lighting are scheduled for December, and a fashion show and tea possibly for next January.

Council Member Dave Gattis said he likes all the events. “They’re a lot of fun for the community.”

Council Member Marvin Behm said he agreed. The events “help bring people out to meet each other,” he said.