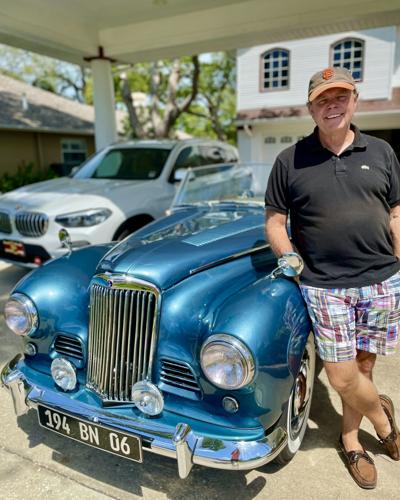 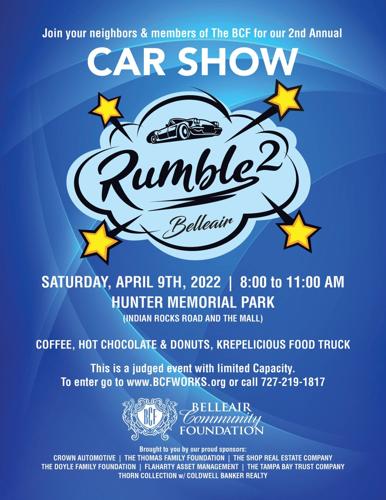 The Rumble car show will operate for one hour longer in its sophomore outing.

The Rumble car show will operate for one hour longer in its sophomore outing.

BELLEAIR — There’s a rumble set to take place in Belleair this weekend, but it’s not the Jets and the Sharks squaring off.  The Belleair Community Foundation’s Let’s Rumble 2 car show is scheduled for Saturday, April 9, from 8-11 a.m. at Hunter Memorial Park.

“We learned a lot from our first show, so Rumble 2 will be bigger and better,” said the foundation’s president and CEO, Karla Rettstatt, via email.

Changes include the addition of a food truck, extending the show by one hour and having live entertainment.

“What makes our show unique is the fact that some of our entries are private collections and not seen at other shows,” Rettstatt said. “And it's a morning show, which allows attendees to enjoy the rest of their weekend.”

It was the picturesque setting of Hunter Park, plus the selection of vehicles, that led local car buff Mike Hugill to get involved with the inaugural Rumble. Known for singing at local events as well as performing with the Eight O’Clock Theatre troupe, Hugill has owned several vintage autos and entered them in dozens of shows.

“The first one was very successful, because it had a framework in place and a nice mix of cars, including muscle cars and vintage models, imports and exotics,” Hugill said. “We didn’t want it to be another Mustang/Corvette/Camaro show, because you can see those anywhere.”

Hugill, who owns a stately 1953 Mercedes 170S and a 1953 Sunbeam Alpine that’s a dead ringer for the one used in the Alfred Hitchcock film “To Catch a Thief,” said the BCF car show committee made a few tweaks they believe will help improve the event this year.

“This year we’re doing things a bit differently,” he said. “It ran from 8 to 10 last year, and this year it’s 8 to 11. So, we extended it an hour, and we’ll have live music and the Krepelicious food truck serving crepes. And at this point, we’ve got more than 40 entries with a week and a half to go. So, we’re feeling just fine about this year’s show.”

Hugill noted there were some rumblings (pun intended) about moving the show to a bigger venue if it continues to grow, and thus outgrow, the park. But he said to do so would ruin the spirit of the event.

“There were rumblings about moving it to a country club and making it a big car show, but I said no, because there’s two country clubs in town and we don’t want to favor one, and Hunter Park is the perfect spot in this perfect little town for a car show,” he said, noting they have space for up to 84 vehicles.

“The inaugural Let's Rumble was just another event the Belleair Community Foundation, and its sponsors presented to the residents of Belleair,” she said. “The BCF goal is simple, to bring folks together.”

Details: The second edition of the Rumble car show hosted by the Belleair Community Foundation will include a food truck, live entertainment and a longer running time. The judged event will feature more than 40 vehicles, many from private collections, and they will have coffee, hot chocolate and doughnuts, as well.