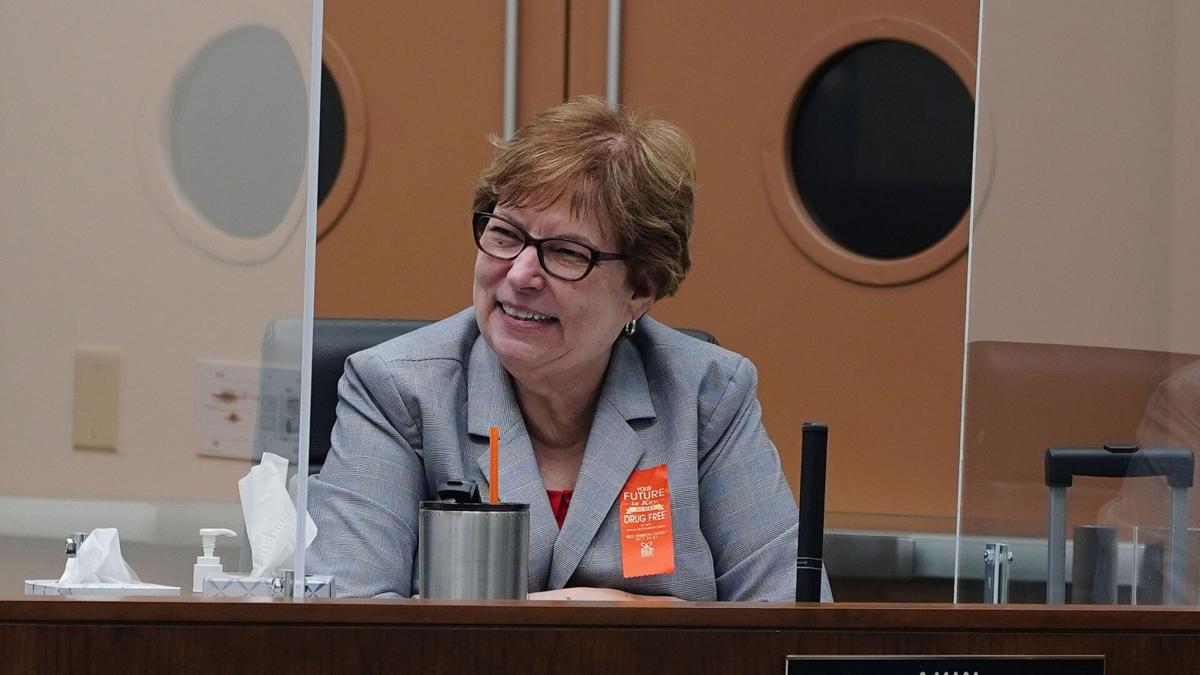 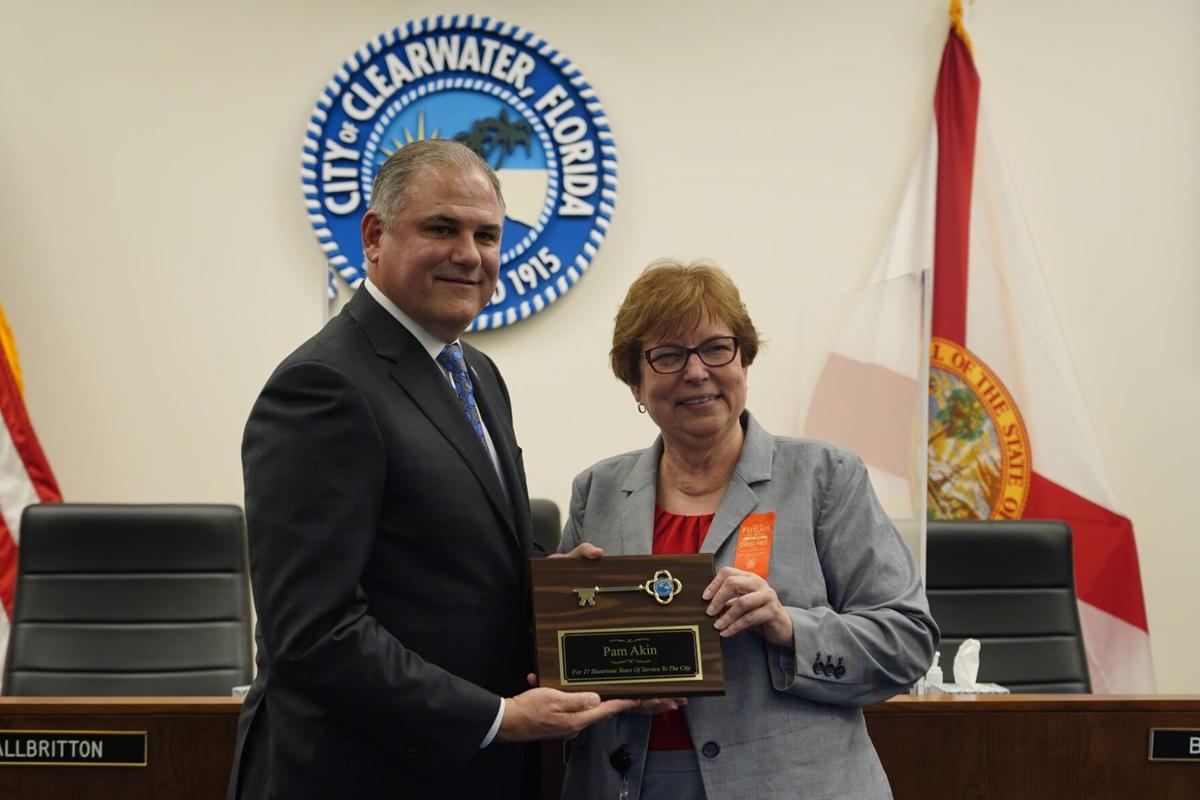 Clearwater City Attorney Pam Akin poses for a photo with Mayor Hibbard after receiving the key to the city after her last city council meeting on Thursday, Oct. 21, 2021 in Clearwater.

Clearwater City Attorney Pam Akin poses for a photo with Mayor Hibbard after receiving the key to the city after her last city council meeting on Thursday, Oct. 21, 2021 in Clearwater.

Few people have been closer to Clearwater’s recent history than Pam Akin.

In leading the city’s legal department for 27 years, she advised citizens serving on charter review committees and represented the city in development deals. She oversaw policy changes in the early 2000s that led to redevelopment of Clearwater Beach and counseled nearly 30 elected officials.

Akin also worked side-by-side with the city manager of 20 years, Bill Horne, who died weeks before his planned retirement in August.

As Mayor Frank Hibbard presented Akin with a key to the city Oct. 21, council members took turns praising her as a trusted confidante who helped mentor and guide city leaders.

“She’s always been a marvelous attorney who has kept the city out of trouble,” Hibbard said. “She has created guardrails for us. And because of that, we really have fared very well over the many years.”

Akin, 68, grew up in Dunedin and worked as Tampa city attorney under then-Mayor Sandy Freedman from 1988 to 1994 before joining Clearwater.

The Tampa Bay Times spoke to Akin about reflections on her career. The conversation has been edited for length and clarity.

I was working in Chicago in neonatal intensive care. It was frankly just very, very tough work for a young nurse, with the high mortality rates and not great outcomes. After a few years of doing that, I decided I wanted to have a career change where, at least in theory, no one died.

The city was going through a lot when you came on in 1994. There had been a contentious election and turnover with the city manager. What was it like walking into that?

Being city attorney for 27 years, you could also be seen as a local historian. How have you seen Clearwater evolve over the last three decades?

From a pure population standpoint, it has not increased that dramatically. But the composition to me seems to have changed.

One observation I would make, and it’s not just Clearwater: City government is nonpartisan. Back 27 years ago, really nine times out of 10 I had no idea what the political affiliation was of any of my commissioners. In local government, party just didn’t really play a role. That has changed. Even here it just has more of a partisan feel than it ever did before. I do not see that as an improvement at all.

The city has also changed in terms of redevelopment. What has been your role in those changes?

With Clearwater Beach, Mike Roberto (city manager from 1997 to 2000) got that started. A lot of things had to be done to get all that implemented through the state. When the first projects started coming online, like Sandpearl and the Hyatt resorts and other projects, I was very proud of all those because I was involved in their development agreements. I would drive by and look at them and say, ‘I had something to do with that.’ They are wonderful, impressive projects and they really helped the beach. I was proud to have been a part of them, even if was just writing the documents.eople coming from other communities, from outside the state. Our Hispanic population has grown considerably. Clearwater is becoming more diverse than it was.

What has been the most challenging part of your job?

When Mike Roberto started, his job was to be a change agent, and he was. Change can create stress within an organization. He accomplished, and that council accomplished, a lot of really great things that laid the groundwork for things that came later. But the stress within an organization can be a little challenging in keeping everyone together and calm and moving forward.

The stability of having Bill Horne as city manager for 20 years (from 2001 to 2021) was in many ways very positive. I think it gave an opportunity for just sort of getting to the business of governing.

What are you most proud of in your career?

There are some big things, like the projects that got done, the buildings. But for me, a lot of it is the small things that keep things running smoothly. Defending the city in litigation. Taking care of business is the thing that I’m very proud of. We keep things going, we keep things smooth, we keep the city out of trouble.

The City Council hired David Margolis to be your successor. Have you given him any advice?

We’ve had quite a few conversations as I update him on things that are still hanging out there. I’ve given him practical advice but mostly my advice to him has been: Starting on Oct. 25, this is your office, you do it your way. He can give me a call and I’ll be happy to give him some history on a particular issue, but I have no interest in lurking in the background.

What will you be up to in retirement?

I’m going to do some traveling. I have at least 20 unfinished quilting projects. I wish that was an exaggeration, it’s really not. I have friends who do things like blueberry-picking and they come back and create preserves. I want to do that.

When you have a job like city attorney or city manager, the hours you spend in the office are only part of it. It’s the waking up at 3 o’clock in the morning where you go, ‘That’s something I need to think about’ or ‘I need to do this’ or ‘What’s the status on that?’ It’s with you all the time. I’m looking forward to it not being there all the time.

I will absolutely miss the people, the office, the issues, even. But I’m ready to go and do normal things.