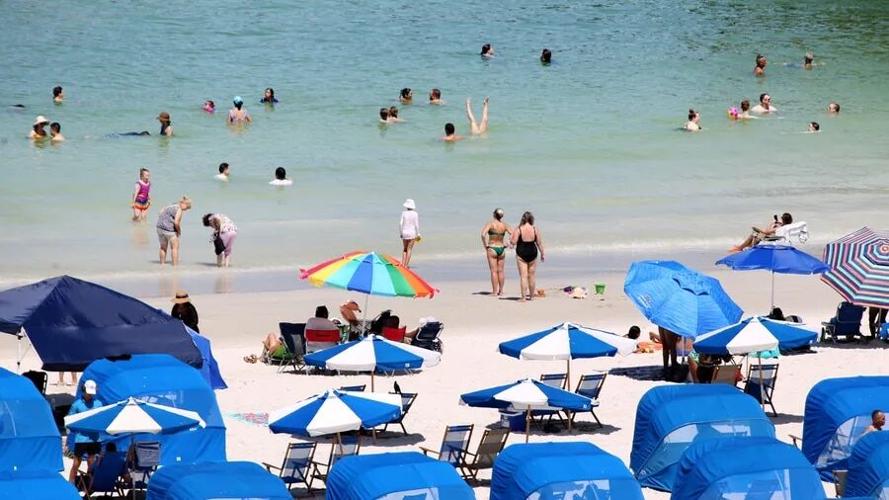 Beach visitors explore the shallows off Clearwater Beach south of Pier 60 recently. The water in the Gulf of Mexico and Clearwater Harbor is generally blue, green or even tea-colored. 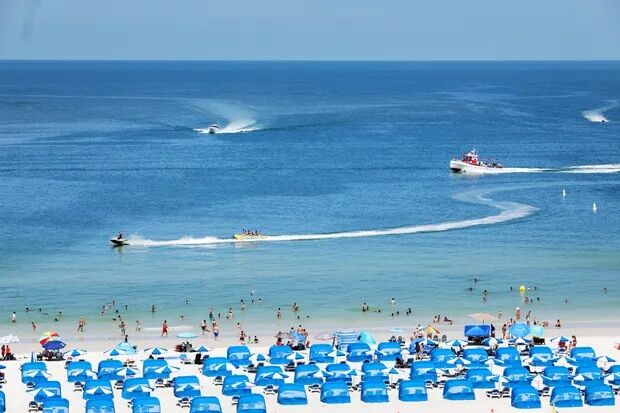 Beach visitors explore the shallows off Clearwater Beach south of Pier 60 recently. The water in the Gulf of Mexico and Clearwater Harbor is generally blue, green or even tea-colored.

Clearwater Beach is a beautiful area and a renowned vacation destination. But let’s get one thing straight: The water is not clear. More often blue, green or even tea-colored, the water in the Gulf of Mexico and Clearwater Harbor changes depending on the light and the algae in play.

Where did the beach get its misnomer of a name?

It turns out that when the Tampa Bay area was known only to the Native Americans and later the city’s first founders, clear springs gurgled from the banks into the bay of what would be known as Clearwater Harbor. The springs, long since gone, were located along the high bluffs upon which Clearwater’s City Hall and most of its downtown are now situated.

“There was an abundance of springs all over Florida more than a century ago,” said Andrew Huse, a researcher and curator of Florida studies at the University of South Florida. “Most of them died for lack of water as humans pumped water and drained the water table.”

Early settlers called it Clear Water Harbor. It was the name that the city’s first postmaster, David B. Turner, gave his new post office in 1859 on a federal government form. No name better described the body of water located a block away from Pinellas County’s first post office at the foot of Turner Street.

“He named it Clear Water Harbor because the water in the bay was so clear you could look down 10 to 12 feet and see the fish,” the late Joseph Turner Sr., former mayor of Clearwater and grandson of the post office founder, told the Tampa Bay Times in a 1990 interview.

That was the town’s name until 1895, when Clearwater became one word. “Harbor” was dropped in 1906. Clearwater would later become the first organized community on the peninsula.

Before Europeans arrived, the Tocobaga tribe of Tampa Bay fished and gathered shellfish as their primary source of food. They also ate manatees and supplemented their diet with wild berries, nuts and fruit. Fresh, pure springs bubbled up along the shoreline, providing a dependable supply of fresh drinking water.

Al Hine, who is the University of South Florida’s retired emeritus professor of geological oceanography, said the barrier islands and back bay system offered a plentiful supply.

Hine is the author of “Geological History of Florida: Major Events That Formed the Sunshine State.” His book notes that Tampa Bay is unusual in the state’s geology as an area where sinkholes collapsed more than 7 million years ago to create a depression that filled with water to become Tampa Bay.

“Many millennia back, Tampa Bay was a freshwater drainage basin that took shape when sections of the region’s limestone substructure collapsed,” Jack E. Davis wrote in his Pulitzer Prize-winning tome “The Gulf: The Making of an American Sea.” The influx of freshwater changed its biology between cycles of drought and rising water. “Some areas stayed more turbid and clear, and more salty or fresh, than others, and the shoreline supported mostly mangroves and salt marshes.”

The environment bears little resemblance to the Clearwater shoreline of today, Hine said.

“During the fall months, when the mullet were spawning, they often came into the bay in such numbers, that at low tide the men could walk out and kick them ashore,” according to “A History of Clearwater,” written by the Woman’s Club of Clearwater in 1917. “The women scooped up aprons full at a time. The roaring noise the fish made was often heard across the bay.”