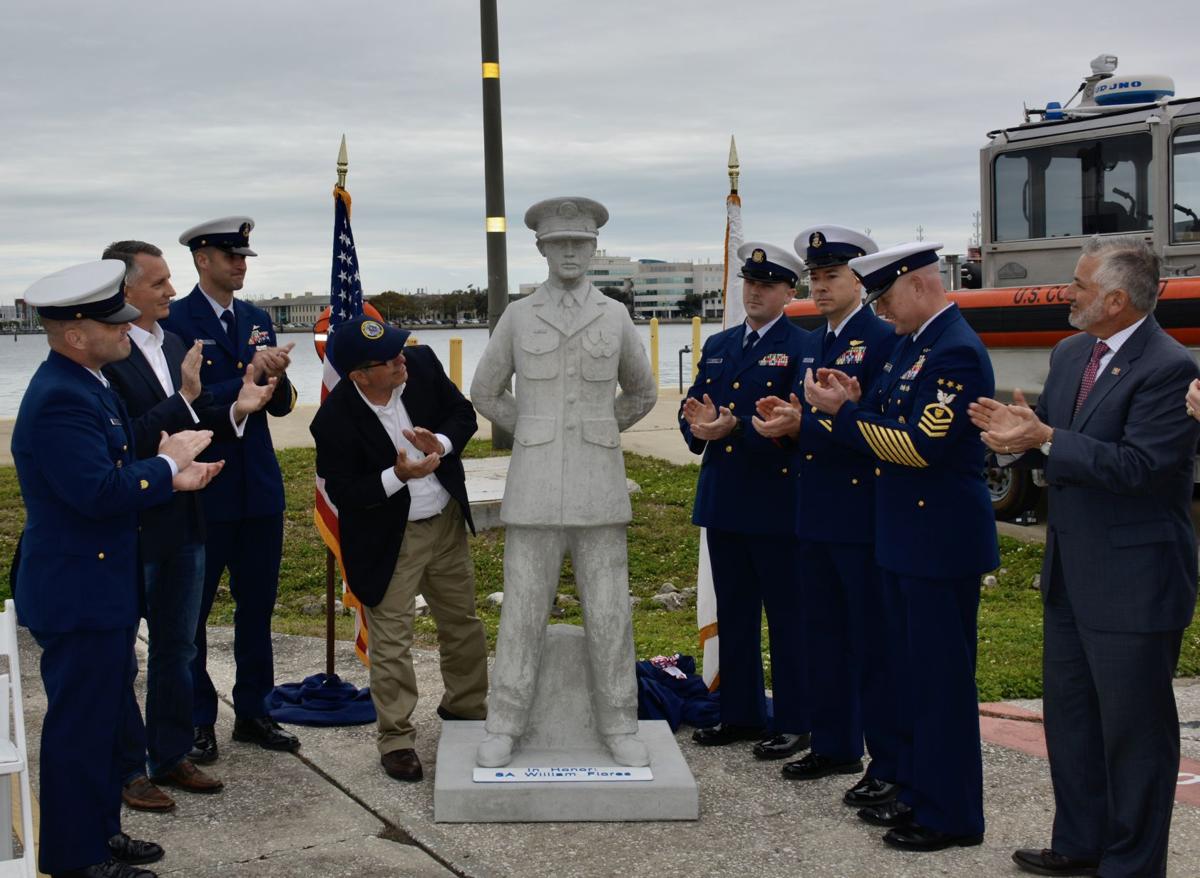 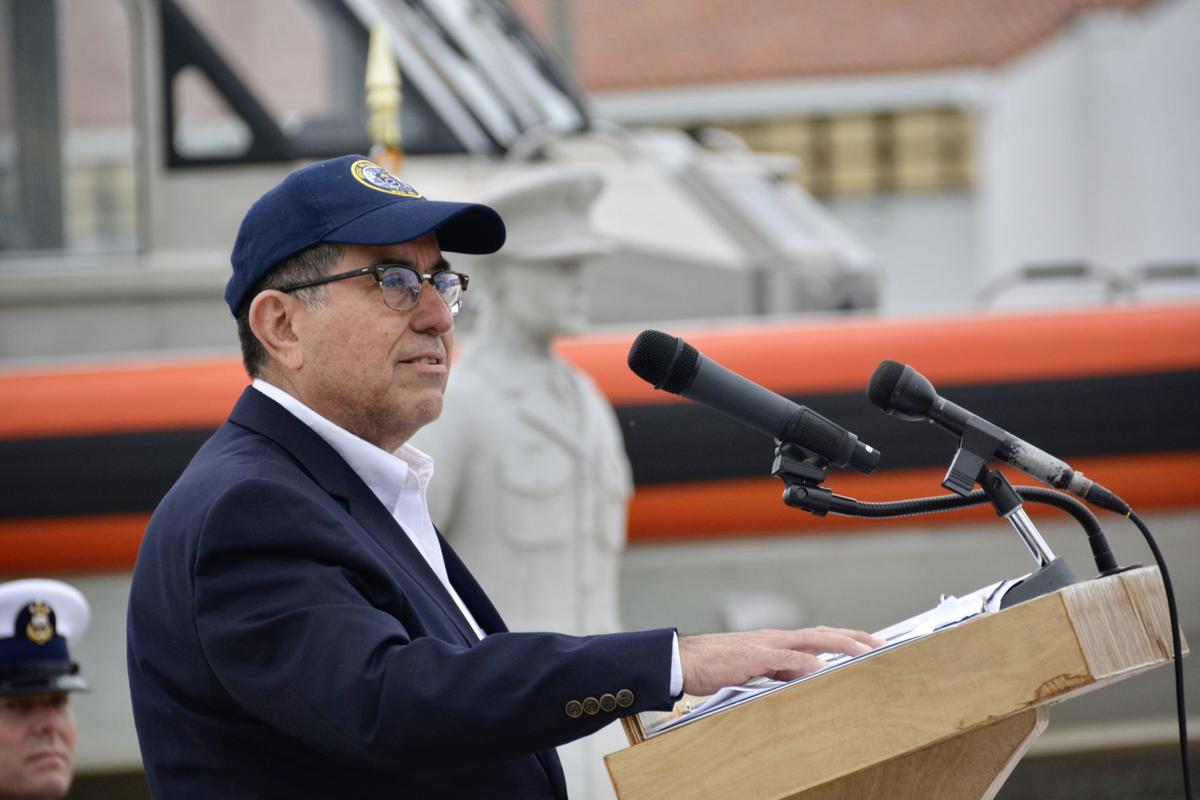 Sam Flores, brother of Coast Guard hero William Flores, talks about his sibling’s sacrifice at the unveiling of the statue.

Sam Flores, brother of Coast Guard hero William Flores, talks about his sibling’s sacrifice at the unveiling of the statue.

CLEARWATER — Forty years ago last week, a 180-foot-long Coast Guard buoy tender slipped under the Sunshine Skyway Bridge after dark and was moments away from reaching a slight turn in the channel and heading out into the Gulf of Mexico.

Heading inbound into Tampa Bay in the same channel was the 605-foot-long Capricorn, a fuel tanker carrying No. 6 oil, which is used in the production of electricity.

According to the U.S. Coast Guard Marine Casualty Report on the worst peacetime disaster in the service’s history, the Coast Guard tender, named the Blackthorn, failed to respond to radio warnings and emergency horns on the larger ship. Though numerous simultaneous events, including a shrimp boat trying to overtake the Coast Guard ship, added to confusion near the Skyway Bridge, radio traffic from other ships may have stepped on each vessel’s attempts to warn the other, the report states.

Just as the narrow channel bears slightly to the right and becomes Mullet Channel, the Blackthorn, instead of pulling to the right to avoid a collision, drove into side of the incoming tanker. The tanker’s large, steel anchor tore along the side of the Coast Guard ship, actually entering the shower room and seriously injuring a Coast Guardsman as he was showering.

It took just minutes for the compartments on the smaller buoy tender to flood, which caused the Coast Guard ship to quickly lean, capsize, and sink to the bottom.

Last week, one young Coast Guardsman who saved lives that day in 1980, Seaman Apprentice William R. Flores, 18, was honored with the unveiling of his statue to be added to the Circle of Heroes, the underwater memorial to the armed services off Clearwater.

Coast Guard Sector St. Petersburg officers, personnel, and Flores’ family members were on station on Jan. 27, a day before the 40th anniversary of the Blackthorn’s sinking, for the ceremony. The 6-foot-tall concrete statue will be the 13th figure added to the underwater memorial, the nation’s first dive memorial honoring veterans. A date for the statue’s installation in the underwater memorial was not given.

“Our family is honored to see my brother become part of such an iconic memorial,” said Sam Flores, William’s sibling. “It was William’s nature to help others. We are all very proud of him and grateful to know his story will continue to inspire others for generations to come.”

And Flores’ story continues to inspire younger Coast Guardsmen who learn about him during training.

The Coast Guard casualty report recounts the sinking from the point the Blackthorn left dock in downtown Tampa to its demise just west of the Skyway Bridge.

Once the collision occurred, the Coast Guard crew had to think quickly; some, who had mustered on deck to await emergency station assignments, abandoned ship and swam to avoid being sucked down with the sinking vessel. Others swam for freedom from below, swimming upward toward the bottom of the ship and escape hatches. As some of them reached the inverted hull, they were greeted by Flores, who, a Coast Guard report stated, comforted and helped injured shipmates overboard into the water, where they joined other men.

Not only that, but Flores, a native of Carlsbad, New Mexico, threw life jackets to seamen struggling to stay above water in the January night. He also used his belt to strap the life jacket locker open, so remaining life jackets would be released as the vessel sank. The Coast Guard credits Flores with saving 23 lives.

There were other heroes that day, according to the report: Seaman Michael Rhodes and Chief Warrant Officer John S. Miller.

Rhodes, according to his Coast Guard Medal citation, “undogged the watertight door and used his considerable strength to hold open the 130-pound door. Instead of egressing from this extremely perilous situation, he remained in position until at least two of his shipmates were able to escape. Then, as flooding of the messdeck continued, he fully opened the door and made good his own escape.”

As Flores helped confused and injured men on the inverted hull, Miller “cajoled and organized men in the water, ordering other men off the capsized vessel into the water and into lifejackets,” the report stated.

According to the Coast Guard, the ship sank within 10 to 15 seconds after it inverted, and that may be the point where Flores lost his life.

Even after most of the crewmembers abandoned ship, Flores, “with complete disregard for his own safety, remained on the inverted hull to assist trapped shipmates and provide aid and comfort to injured and disoriented shipmates,” the report said.

According to the casualty report, Flores’ body “was recovered on the surface on Feb. 5, one mile southwest of Sunshine Skyway Bridge center span. The cause of death is listed as drowning. His body was removed for burial in Benbrook Cemetery in Fort Worth, Texas.”

“Flores sacrificed his own life to save others, demonstrating extraordinary courage, bias for action, and devotion to duty, especially noteworthy given his limited shipboard experience,” Coast Guard Capt. Matthew Thompson said at the statue’s unveiling. “There is no doubt that he belongs in the Circle of Heroes.”