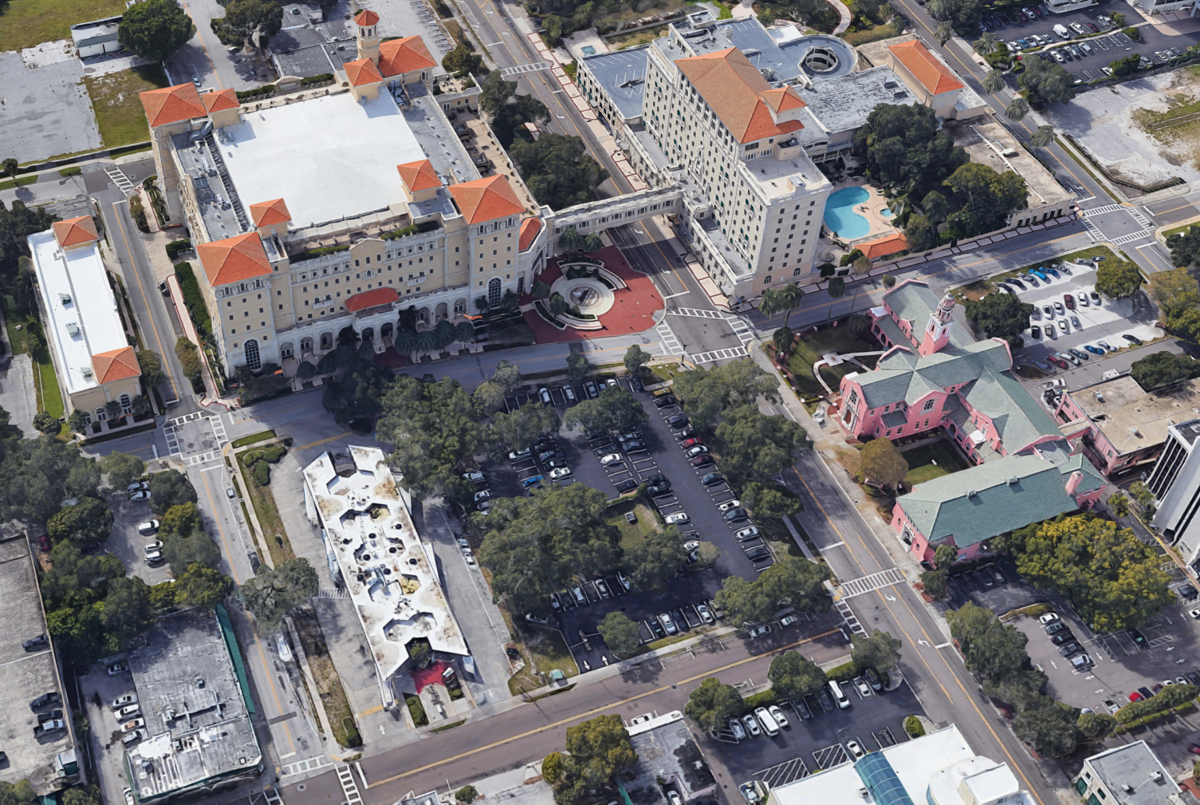 The City Council has narrowed its preferences for the site of a new City Hall. Its first choice is PSTA’s Park Street terminal and Pinellas County parking lot, shown at center next to the Church of Scientology’s Flag building and Peace Memorial Church. It's the council's hope to build a high-rise structure that could possibly include retail stores and restaurants on the first floor, a parking garage comprised of six floors, and City Hall offices on top. 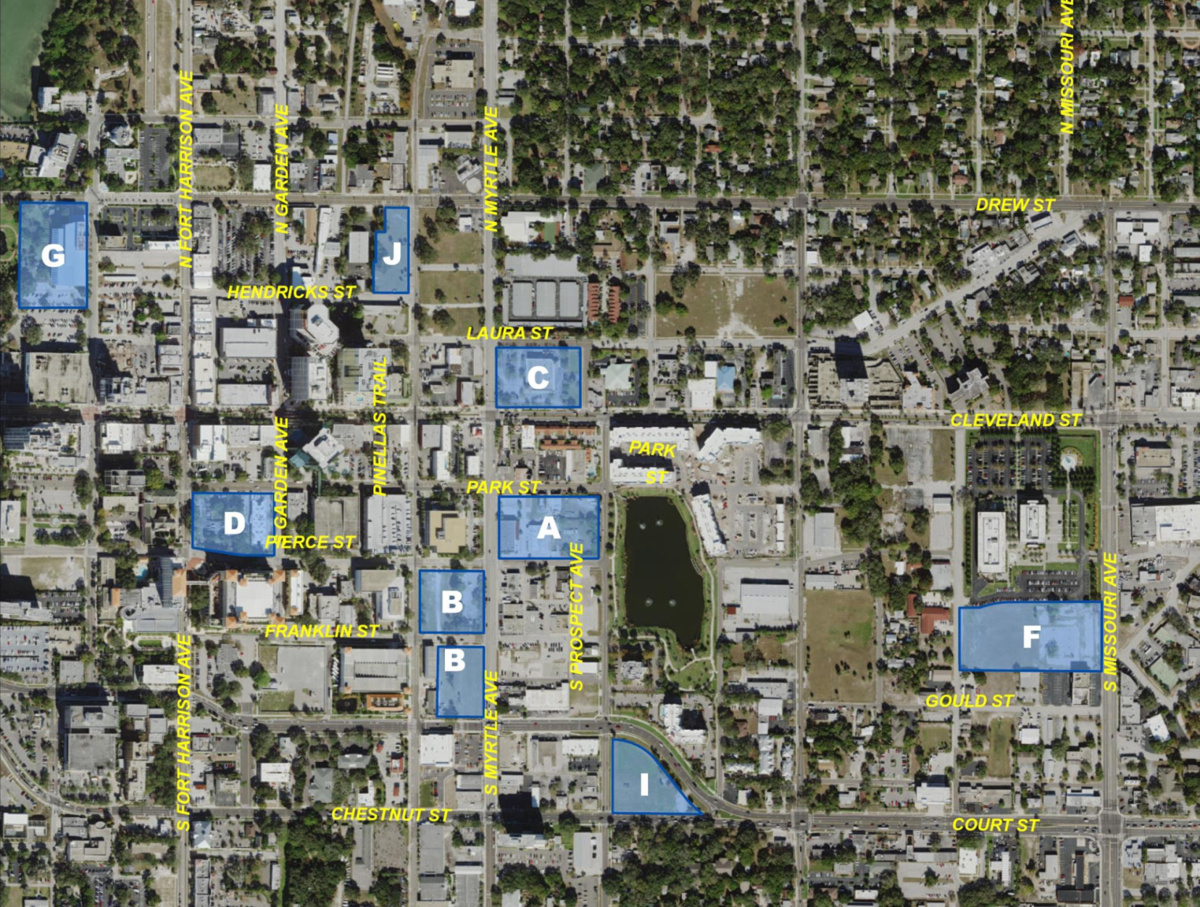 City staff presented council members with a number of options for the site of a new City Hall. The council is favoring site D, PSTA’s Park Street terminal and Pinellas County parking lot. Site B, which includes two city-owned parcels along Myrtle Avenue, is also being considered.

Staff last month presented City Council members with 10 sites that could be the future home of City Hall. They narrowed that list down to two Aug. 5 during a special work session.

And they say the preferred site — the Park Street PSTA terminal and Pinellas County parking lot — could also include a much-needed parking garage for downtown.

In January 2019, the city left its aging City Hall building and relocated to the sixth floor of One Clearwater Tower at 600 Cleveland St. under a five-year lease.

The goal was to redevelop the former City Hall site as part of the Imagine Clearwater plan and continue discussions with Pinellas County about a joint-use facility. The county scuttled that plan, so the city turned its focus to building its own City Hall.

“The city hall selection criteria that I’ve looked at, (the PSTA site) almost checks every box,” said Council member David Allbritton, who added he’s been interested in the property for the past 15 years.

He said a structure there could include a mix of restaurant and retail uses on the first floor, six floors of parking, and City Hall offices on top.

However, the city doesn’t own the roughly 2-acre property across the street from the Church of Scientology’s Flag building, so acquiring the site will require negotiations with PSTA that might include trading land along Myrtle Avenue that also happens to abut the council’s second choice for a future City Hall.

For several years, PSTA has been planning on replacing its Park Street station with a new intermodal center at the northwest corner of Myrtle Avenue and Court Street, so Allbritton said he is optimistic the trade could happen.

Allbritton, who is on PSTA’s board of directors, added the Park Street terminal isn’t the right size to make it compatible with PSTA’s future plans for electric buses.

“I know that we can swap lands with PSTA, move them over to Court Street and Myrtle,” he said.

The intermodal center has been stalled, however, because PSTA has lacked the funding to bring it to fruition.

Hibbard said he is growing impatient with the lack of progress on the city-owned site that once housed a St. Pete Times building.

“At some point … they (PSTA) are going to need to step up to the plate because I don’t think we should land bank that property forever,” he said. “They need to go out and either find the money internally, through the county or through the fed (federal government) so that something can move forward.”

He urged Allbritton to take that message back to the board of directors.

City Manager Bill Horne added that the city has eyed the PSTA’s Park Street site for a parking garage for some time, but the parking lot on the property belongs to Pinellas County.

Council member Hoyt Hamilton questioned whether the city would be giving up too much if it traded the properties.

“That’s an awful lot of dirt we’re trading for the size of dirt we’re getting, and they (PSTA) are the ones that are getting the great benefit out of that,” he said.

To make the deal more equitable, he suggested PSTA also pitch in the money to pay the county for its parking lot.

Other concerns were brought up about the Park Street site.

Gina Clayton, the city’s director of planning and development, said it was No. 4 on staff’s list because it was surrounded by institutional uses — Peace Memorial Church and Church of Scientology buildings. Therefore, it couldn’t provide the same economic benefit to the surrounding area as the Myrtle Avenue properties.

“We felt that that would really create a dead zone downtown,” she said.

Building a high-rise would also be more costly than some other alternatives, according to engineering construction manager Tara Kivett.

She estimated it would likely cost more than $40 million.

“And that’s why we never build a city hall,” Hibbard joked.

Staff said the city had $10.5 million in the parking fund, and Hibbard said a potential public-private partnership could help offset some of the cost.

“I would prefer to solve the parking issue that we still have in downtown combined with a city hall, and I would still like to leave in the mix the potential for a partnership on the private side,” he said.

Hibbard added it would be foolish to not have a plan B, which would be a standalone City Hall on a 1.674-acre parcel on the west side of Myrtle Avenue bounded by Pierce Street to the north and Franklin Street to the south.

The city-owned site is also situated directly to the south of the municipal services building and east of the police department.

Council members also discussed incorporating City Hall into the Main Library that will soon be renovated as part of the Imagine Clearwater plan.

The majority of council members agreed, though, that it would be difficult to do without disrupting the library’s offerings.

“I think the library is a great location for City Hall,” Hamilton said. “However, I have serious doubts that the library can house (city) hall and all of the library needs … together.”

Assistant City Manager Michael Delk said staff would put more data together on the two sites for the council because it has another decision to make.

The city would have to decide whether to renew its five-year lease to remain at One Clearwater Tower, and City Attorney Pam Akin said nine months’ notice would need to be given.

Council member Kathleen Beckman said it seemed doubtful a new City Hall could be built before that deadline, but Allbritton and Hamilton said it was possible if they acted quickly and the pieces fell into place.

“I think that this could happen if we make the decision to move forward,” Allbritton said.