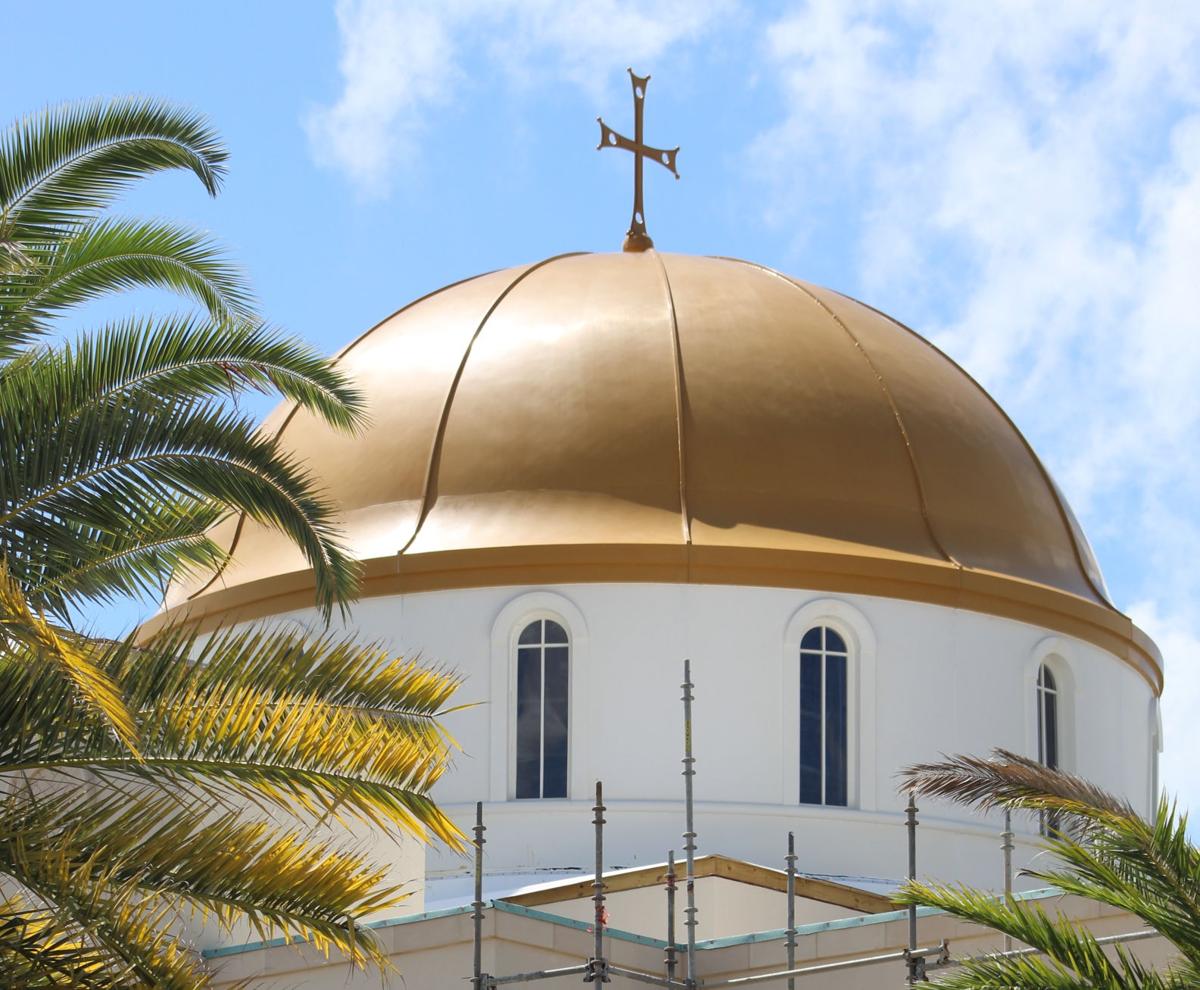 The rustic gold dome of the new Holy Trinity Greek Orthodox Church was gel-coated for optimum protection under Florida’s brutal sunshine. The interior should be finished by Christmas Eve, exactly 50 years after the first Christmas Eve was celebrated in the former church. 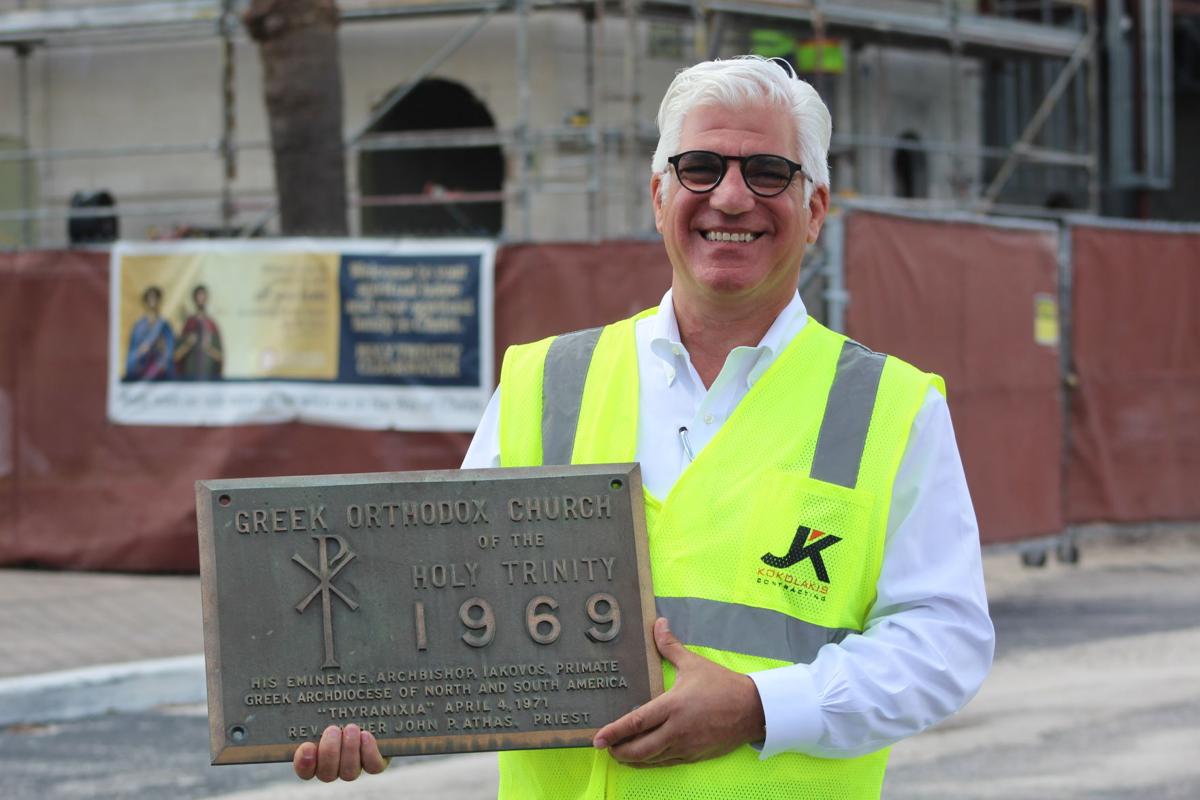 Joseph Kokolakis is not only the owner of the construction company that’s building the new church, he’s also a 30-year member of the congregation.

This is not how the Holy Trinity Greek Orthodox Church at 409 Old Coachman Road looked when firefighters pulled into the parking lot in September 2015 after someone left a candle burning. Unattended for some time, the flaming wax melted and ignited a fire that spread quickly.

The resulting smoke and water damage destroyed about 40 percent of the church, said Joe Kokolakis, whose company, Kokolakis Contracting, is building a new church in its place.

“The front of the church caught fire, a glass partition wall broke from the heat, and a lot of other damage occurred before the fire department could put out the flames,” he said.

The fire damaged Holy Trinity, a center of Greek Orthodox community since 1969, beyond the point of renovation. Holy Trinity’s priest, Rev. James T. Paris, who arrived on site during the fire and toured the damaged church Sunday morning, said he and members of his congregation used smartphone flashlights to rescue items from the altar of the darkened church.

“We opened the gymnasium the morning after the fire, set up a temporary altar from tables, and set up rows of chairs,” Paris said.

“We delivered the Divine Liturgy and Holy Communion to the congregation in what some now call the ‘church-nasium.’ It actually sits twice as many people as the original hall.”

Paris and his flock have been worshiping in the gym since the fire, having reproduced the iconography using graphics software and hanging paper versions of it on the gymnasium wall.

Kokolakis, a married father of three, has attended services in the church for more than three decades. He surveyed the damage with church officials after the fire.

“The walls had no insulation, they were just masonry walls without even any structural integrity,” he said. There was asbestos, which had to be abated. After we looked at what it would cost to restore the old church, we found it more cost-effective to build a new church.”

Then there was the question of how to save surviving religious artifacts and rare artwork depicting Christ, the apostles, the saints, and other figures that adorned the interior of the church.

Most of the art and religious artifacts survived the fire and are now securely stored inside the hall, said Kokolakis, who lives in Dunedin.

The Italian art iconography that could be saved — consisting of archangels, saints, apostles, and other religious figures painted on canvas — are in secure storage; Kokolakis said. Once the church is finished, the artwork will once again adorn the walls around the four pillars at the center of the church as well as inside the dome, high above the congregation.

Kokolakis is connected to the art in a special way; he has gazed at the art during services at the church for more than 30 years. He has also served on the Parish Council for six years.

The surviving altar, the one from which Paris and other officiants offered prayer and communion for generations of Clearwater’s Greek Orthodox faithful, faces east, as is tradition in Greek Orthodox churches. When the church was consecrated in 1969, church officials installed a small box inside the altar that contains relics of saints and other irreplaceable objects.

Building new church over the old

During a recent tour of the construction, Kokolakis pointed out a stunning Italian mosaic of Mother Mary with the Christ child in her arms. Her face and that of Jesus peek from behind plastic sheeting on the wall behind the altar.

“Preserving the altar and the mosaic of the Virgin Mary is our proudest accomplishment because it connects the generation that built the church for this community in 1969 to this generation, 50 years later in 2019, that is building the new church.”

Josh Van Vossen, the assistant superintendent for the project, said church officials asked that the altar not be moved.

“We essentially built this new, bigger church around the relics and the altar of the old church,” Van Vossen said.

The new church, when its exterior is finished in October, will seat 500; the old church had room for 325 in its pews. Paris, noting the original church’s first service took place Dec. 24, 1969, plans to hold the first service in the new church on Christmas Eve 2019, exactly 50 years later.

Clearwater Mayor George N. Cretekos, a member of Holy Trinity, not only worships at the church, but has been appointed a lector, which allows him to read from the Bible and other sacred texts during services. He is acutely familiar with the iconography and mosaics the church displayed before the fire.

“Everything we do during the services has meaning going back thousands of years,” Cretekos said. “Our symbolism is unique and very strong.”

He described the art the old church displayed before the fire. Plans are for rehanging the art and paintings that survived. Other art will be replaced.

“In every Orthodox church, in the dome, there is an icon of Christ, the Pantocrator, which is Greek for ‘creator.’ In the apse of the church, the area right above the altar, there is always an icon of the Virgin Mary accompanied with the Christ child. Then, traditionally, around the Virgin Mary, are the icons of the 12 apostles.”

He listed these other attributes of Orthodox churches:

An icon screen with a door separates the altar from the rest of the church. It bears the images of Christ, the Virgin Mary, and other saints. The icon screen or “iconostasion” as the congregation looks at it, displays, from left, the Archangel Michael, the patron saint of the church; the Virgin Mary; the doors opening into the altar; followed by Christ, St. John the Baptist, and the archangel Gabriel.

Near the four posts that support the dome are hung the icons of the four evangelists — John, Matthew, Mark, and Luke.

Kokolakis said construction of the church, shell and all interior finishes — not including iconography — will cost about $6 million.

Local subcontractors on the project include Spectrum Mechanical of Clearwater; Borrell Electric Co., Inc., of Tampa; TBRC Concrete and Masonry, and Raynor Group in Oldsmar.

Kokolakis Contracting, located in Tarpon Springs, is primarily a government contractor. In March, the company won a $45 million contract to renovate the Eisenhower Barracks at the U.S. Military Academy at West Point, New York. The company is also building a Veterans Administration Hospital in Manhattan and a new air traffic control tower and Terminal Radio Approach Control (TRACON) facility at Southwest Florida International Airport in Fort Myers. The company has other government contracts around the nation.