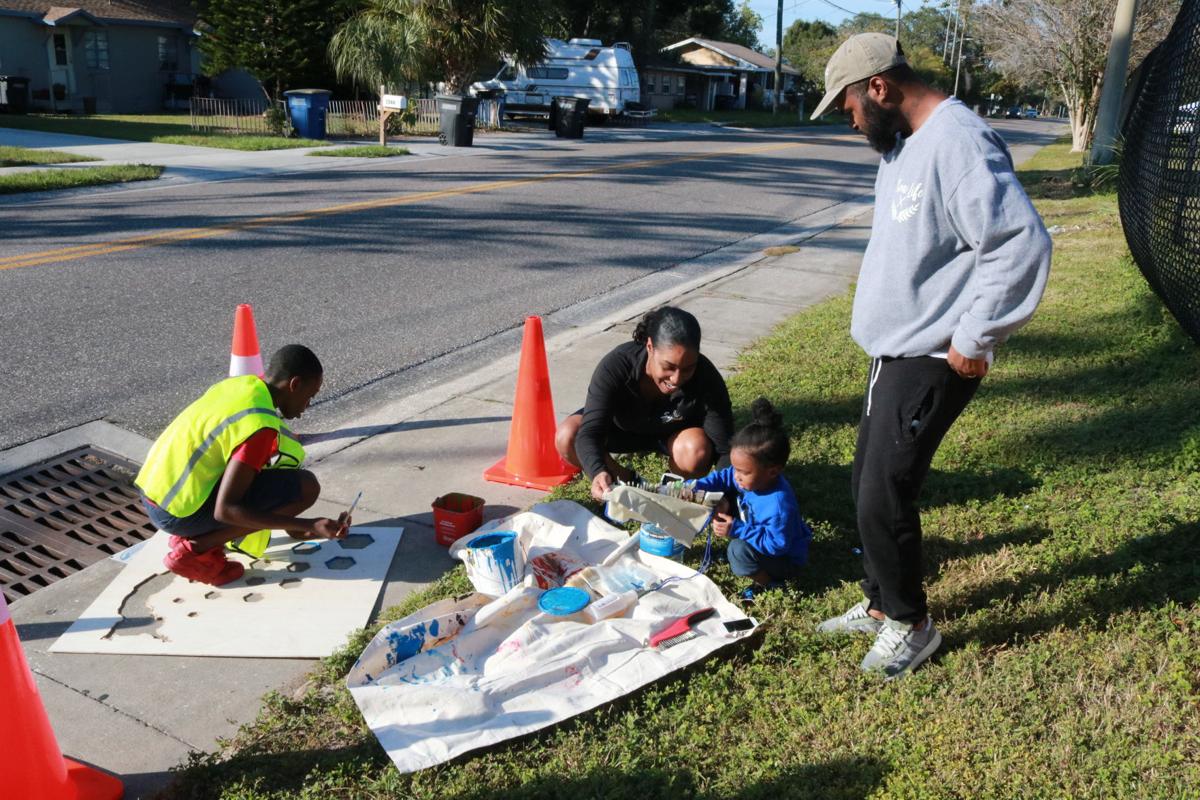 Sarah Davis of Signature Graphics and Printing helps a youngster select a paintbrush as student Kenneth Fluitt paints a stencil. They are painting the storm drain as part of a neighborhood beautification project in the Lake Belleview neighborhood. 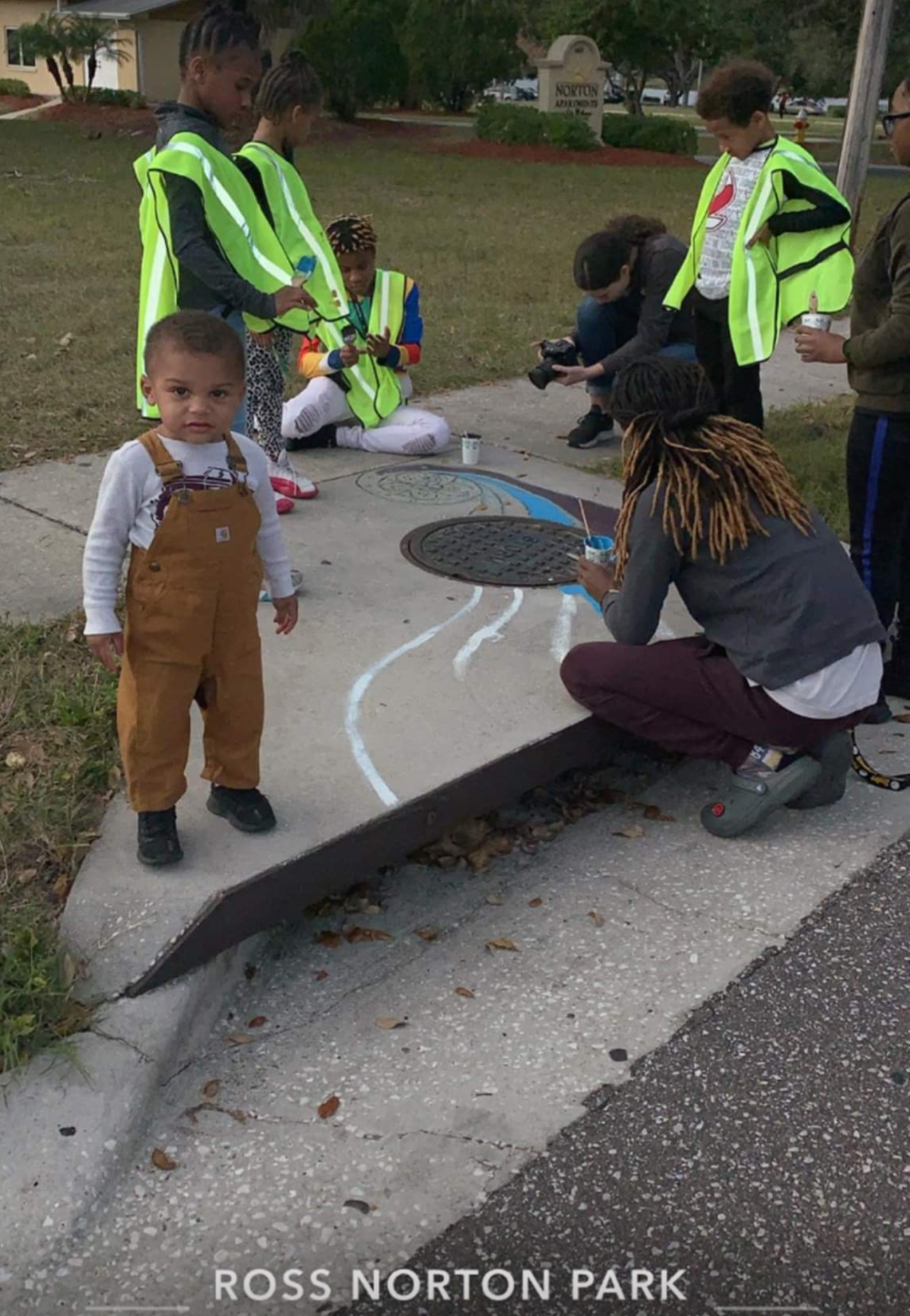 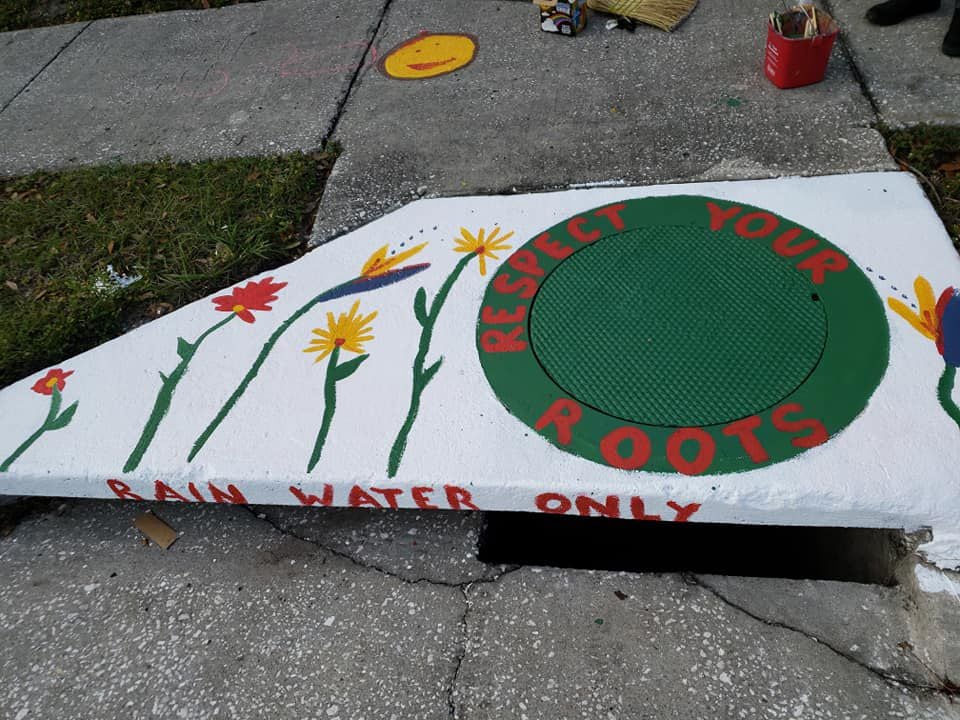 Bright colors and green messages brighten a storm drain in the Lake Belleview neighborhood in Clearwater. A public mural program, led by a local organization called Family and Youth Initiatives, has residents participate in artistic projects and organize for improving the neighborhood.

Sarah Davis of Signature Graphics and Printing helps a youngster select a paintbrush as student Kenneth Fluitt paints a stencil. They are painting the storm drain as part of a neighborhood beautification project in the Lake Belleview neighborhood.

Bright colors and green messages brighten a storm drain in the Lake Belleview neighborhood in Clearwater. A public mural program, led by a local organization called Family and Youth Initiatives, has residents participate in artistic projects and organize for improving the neighborhood.

CLEARWATER — The kids in the Lake Belleview community are using their artistic talent to brighten the community and create new relationships among its residents.

More than 50 volunteers, for the most part elementary and middle school students, have been painting colorful dolphins, seahorses, and other sea life on concrete storm drains, writing such mottos as, “Be the Change”; “Only Rain down the Drain”; and “Rivers Drain to the Sea.”

It’s just one part of the community art effort dubbed “Murals on MLK,” the main street through the Lake Belleview neighborhood.

“This project serves as a platform to connect neighbors in the community,” said Maranda Douglas, a Clearwater resident who recently graduated from the University of South Florida with a business degree. “Oftentimes the kids go to the rec center and play basketball or go home and play their games. This gives everyone the opportunity to come outside and color the community, and parents, too, to meet each other for the first time.”

She got good news Jan. 16, when the city’s Art & Design Board approved her request for $8,500 for the painting of a large mural on the side of 909 Howard Street. The canvass is a 100-foot-long wall owned by property management company HSW Associates.

FYI Inc., located within the Lake Belleview community, has developed a series of what it calls “public art interventions” that enhance residents’ involvement in the neighborhood in which they live, Douglas said.

Before undertaking the monthslong transformation of the neighborhood through art — which launched in September and wraps up in February — FYI volunteers performed a needs assessment in the form a community questionnaire. It was posted on Facebook for online participants as other volunteers did a little in-person canvassing in the neighborhood. The community’s response to the survey drove the painting projects, Douglas said.

Of the 86 neighbors who responded to the statement, “I feel connected socially to my community,” fewer than half (45.3 percent) said they did not feel connected.

“This was the driving force for the entire project,” Douglas said.

When asked about flooding after rains, 25 percent of the community members said flooding was a concern. That gave way to the painting of storm drain murals. Because a majority of residents also worry about a lack of interconnected sidewalks, FYI volunteers went to work painting crosswalks with colorful expressions of common ground. Finally, the questionnaire revealed that a vast majority of residents in Lake Belleview are interested in arts and crafts.

Chris Hubbard, Clearwater’s cultural affairs coordinator, helps citizens like Douglas and other community groups apply for grants and permission to express their Clearwater neighborhoods. He helped FYI with its funding request through the Arts & Design Board.

“This is a wonderful opportunity to reimagine the community and create a new perspective for multi-generational use,” Hubbard said of the Murals on MLK project.

If there is going to be a centerpiece to the beautification and painting of Lake Belleview community, it might be the painting of the entire intersection of Woodlawn Street and South M.L.K. Jr. Avenue. She hopes the students begin painting it when the kids are on spring break.

“We are going to paint the street, intersection painting, everything inside the four crosswalks,” said Juliahna Green, neighborhood services coordinator for the City of Clearwater. She performs neighborhood outreach on key city initiatives. In this case, she works with Douglas and her volunteers, coordinating city resources when she can.

The design for the intersection is not yet final, but youngsters are still handing in examples for FYI’s review.

“We are still collecting designs from the kids,” Douglas said, “but it will link the beach life and the civic life of the city. A crescent wave mosaic with dolphins has been suggested, but many ideas have been suggested.”

The intersection will be painted when students are out of public school for spring break, Douglas said.

The arts board funds other, unrelated urban art projects, such as the $9,000 grant the council approved for the Clearwater Arts Alliance to paint art on some of the city’s traffic signal boxes.