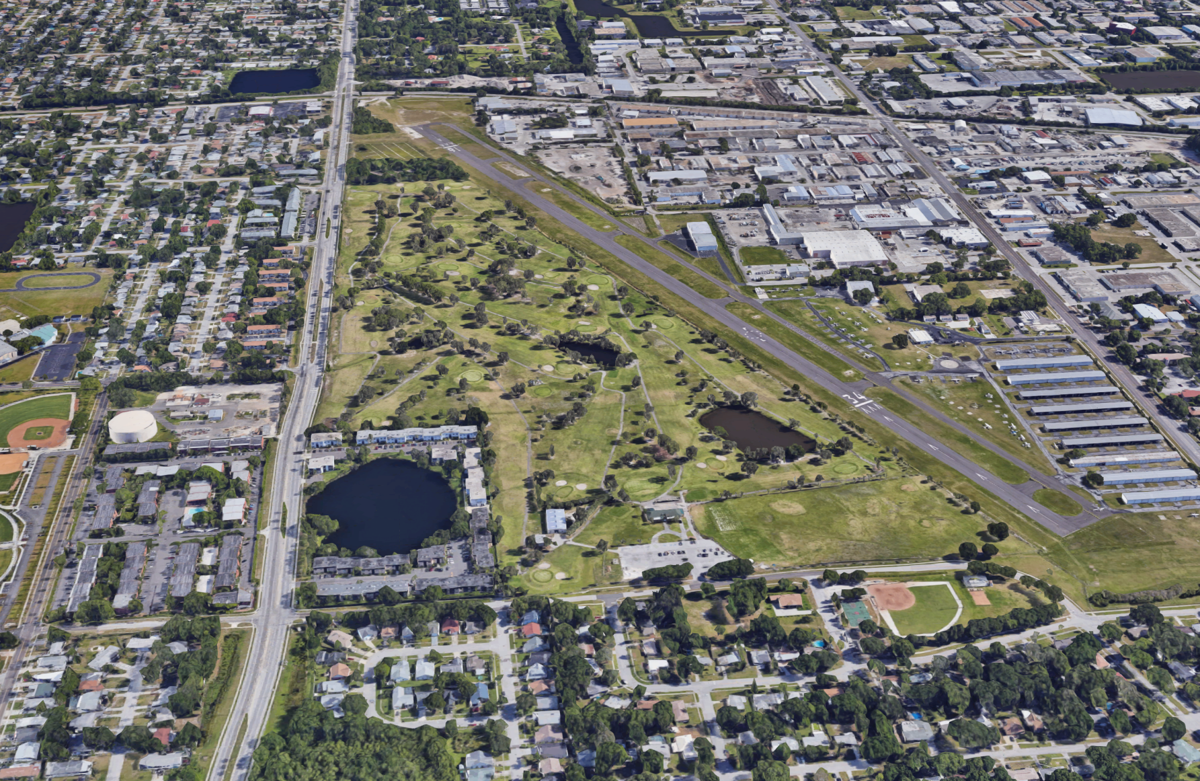 Harrod Properties Inc. plans to transform The Landings Golf Course in Clearwater into an industrial park. However, some residents, especially those at St. Andrews Cove II condominium complex shown at the southwest corner of the course, say such a project doesn’t belong there. Voters will get to decide in a November referendum. 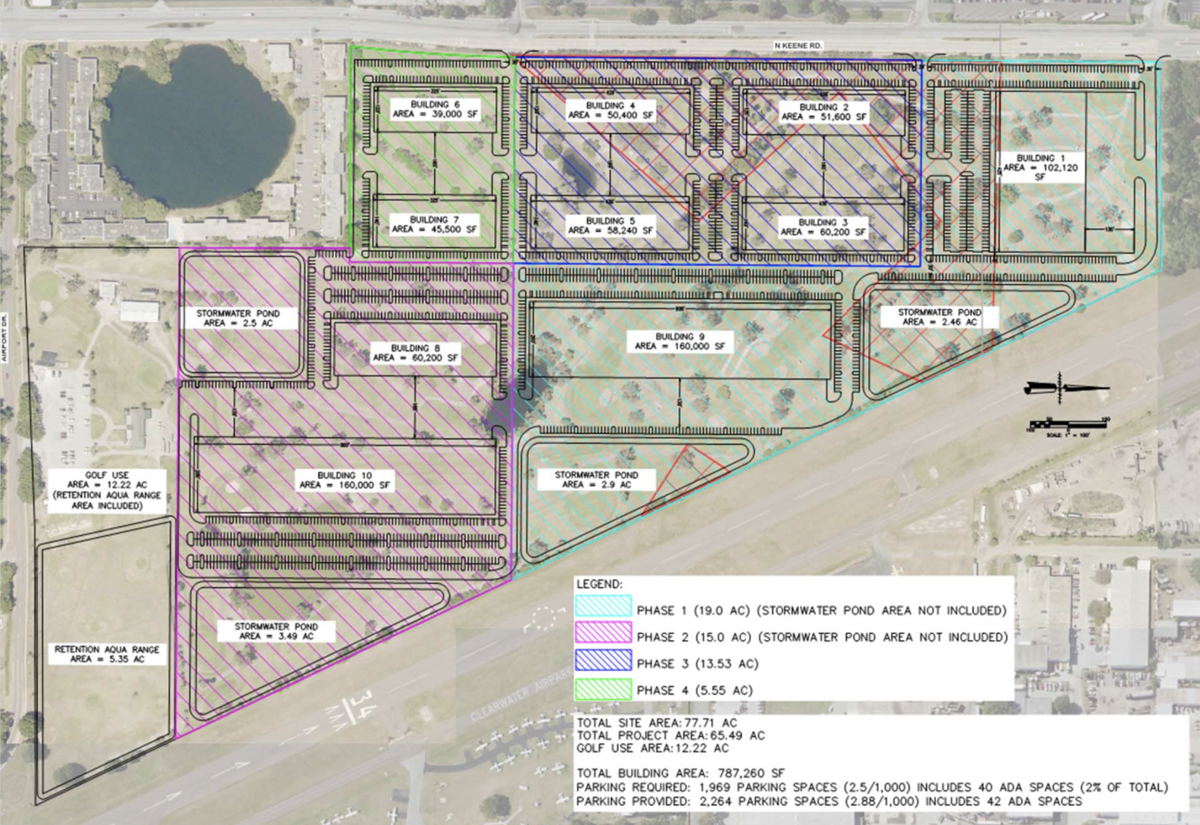 A preliminary site plan shows how the industrial park could look. Rob Webster, senior partner with Harrod, said they are planning on building the development, which currently features 10 buildings, in four phases over five to seven years. The far left would remain a recreational space as an aqua driving range.

CLEARWATER — Plans to build out golf courses have been a hornet’s nest for developers recently in Pinellas County, as opposition from nearby residents has scuttled plans to redevelop Seminole and Largo courses.

If the May 21 City Council meeting was any indication, Harrod Properties Inc. may also have a fight on its hands.

The Tampa-based group aims to redevelop The Landings Golf Course and construct a $131 million, 750,000-square-foot light industrial complex on the 65.49-acre site across the street from the Clearwater Airpark.

The owners of the course currently lease the property from the city for $1,000 a month, therefore residents would have to approve the change.

After more than two hours of discussion, which included more than 20 residents expressing a variety of environmental and compatibility concerns, the City Council voted 3-2 to take the next steps toward that November referendum.

Mayor Frank Hibbard said the project, which an economic analysis showed could create more than 5,000 jobs and provide $11 million to the city over a 10-year period, was too promising to not be given a chance.

“We live in a representative democracy where the majority of the time the city council or the governing body is making the decision. Not on this one. This one’s going to the people,” Hibbard said. “And if the case is not made for this, then the people will vote it down. And I have faith in the voters of Clearwater, and if you don’t allow them to vote on it, I think you’re saying you don’t trust them to make the right decision.”

Beckman shared several of the residents’ concerns before making a motion of her own to table the decision. Bunker seconded the motion, but it failed 3-2.

Rob Webster, senior partner with Harrod, said the group has wanted to build a light industrial project in Clearwater for about 15 years, because the city is in desperate need of one.

“We are currently planning on doing this development in four phases over five to seven years,” he said, while showing a preliminary site plan that includes 10 buildings. “Obviously, if the demand is there, we would like to do it much faster.”

He added that there would be a tremendous amount of other economic benefits, such as big hikes in revenue from taxes and rent, noting the golf course only pays the city $1,000 a month and nothing in taxes.

Beckman emphasized she is in support of the economic opportunities the project provides, but was worried about the removal of green space and lack of sustainability practices included in the proposal.

“I am not anti-building. I am not anti-light industrial or any of that. What I do question is, is this the right spot for it? And I have concerns about the impact on our environment and whether or not we’re meeting the guidance of our Greenprint plan,” she said, referring to the city’s sustainability plan.

In presenting the project, Denise Sanderson, the city’s economic development and housing director, said the city has worked hard to preserve and protect green space.

The course is actually just more than 77 acres, and Webster added that the remaining 12 acres won’t be touched by Harrod.

According to the city, the course owners, the Huston family, aim to construct and operate an aqua driving range, where golfers hit balls into the water, at the south end of the property.

Webster said that space will serve as a buffer between the residential area to the south.

“This site is unlike many in Pinellas County, whereas there’s not a lot of residential neighbors that are impacted,” Webster said, noting how this project differs from other controversial golf course redevelopments in the county.

Comments like that did not sit well with many citizens who addressed the council.

Steve Grant, a resident of the St. Andrews Cove II condominium complex that directly abuts the southwest corner of the golf course, said he finds that notion insulting because there are apartments all along Keene Road on the west side of the course.

“It’s a residential area. It was supposed to be residential. I didn’t move to Keene (Road) into these places to have it be like an industrial section like Hercules,” he said, referring to the avenue on the east side of the course that features several industrial facilities.

Many residents of St. Andrews and the Marymount Park neighborhood to the south echoed those comments, claiming that the project would change the entire complexion of the area.

Bunker even said he was once a resident of St. Andrews, but was still torn on the project that would require a land-use change from open space/recreation to industrial limited.

“The traffic there 24 hours a day was so loud and penetrated through the building that, to me, it always felt like an industrial area anyway,” he said.

He said the economic benefits are hard to overlook but he has been hearing complaints from nearby residents and from golfers who love the course.

“This project as a whole does look appealing, but I want to make sure we address all of those concerns of the public,” he said.

Vice Mayor David Allbritton and Council member Hoyt Hamilton shared Hibbard’s views that the city still had plenty of green space and there was plenty of time between now and November to address residents’ concerns.

“For a city our size, we have more green space, more park land, more preservation,” Hamilton said. “I challenge you to find a city our size that has as much as we do. Yeah, it’s a lot of little parcels, but that’s kind of what makes them unique and makes them interesting.”

Allbritton added that Harrod properties are not the eyesores many people identify with industrial or manufacturing sites.

“This is a modern light industrial (center),” he said. “This isn’t like the industrial we have up Hercules that looks like it should have a horse parked in front of it.”

Hibbard also pointed out that centers such as the one proposed alleviate the tax burden on residents.

“These commercial properties and industrial properties, they help pay for libraries, rec centers, and, oh, by the way, parks,” he said. “And that means the residents don’t have to pay as much.”

Sprung on the residents

Another concern Beckman raised was what she said was a lack of notice about the discussion, which she said was sprung upon the voters.

She apologized to citizens who she said deserved more information to be able to speak intelligently before the council about the project that the city had been discussing with Harrod for the past year.

“I don’t think that’s very respectful of our electorate,” she said.

Sanderson noted that the city’s Economic Development Strategic Plan identified the course as the “best opportunity for expanding Clearwater’s stock of undeveloped industrial property” all the way back in 2011.

Hibbard disagreed with Beckman, emphasizing that this was just the beginning and there will be public meetings before the referendum.

City Attorney Pam Akin said there were many steps that still needed to be taken in the next few months, including council’s approval of the term sheet, language for the referendum question and zoning changes, which will need city, county and state review.

“I’m looking forward to hearing more about it and we can see if we can take care of some of the concerns of our citizens,” Allbritton said. “I know we’re going to have to if we want a successful referendum. We can’t just throw something out there.”