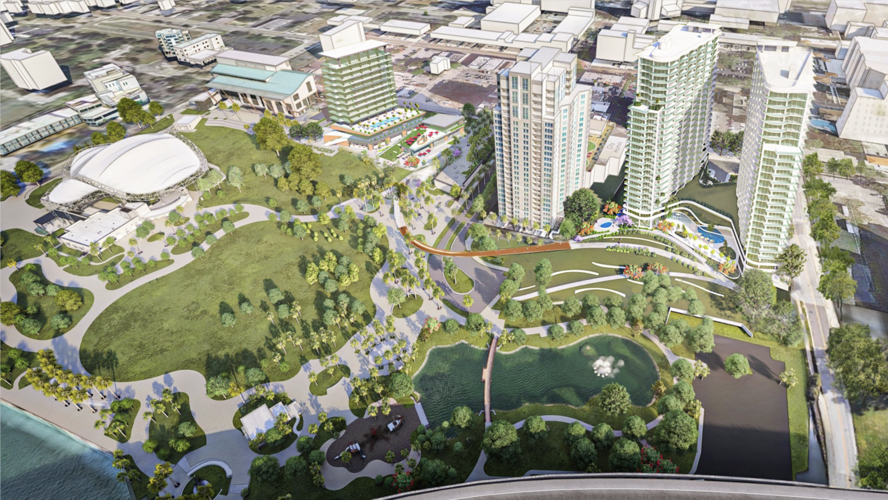 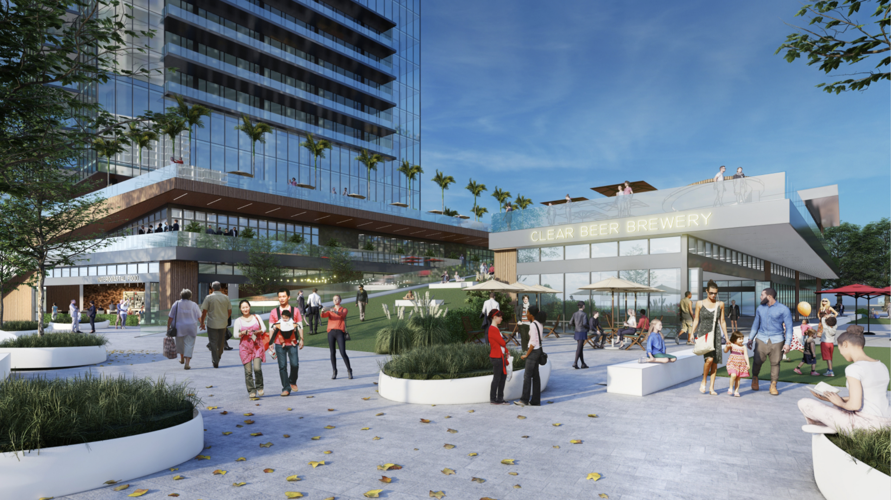 A rendering of the hotel and commercial building planned for the Harborview site at the corner of Osceola Avenue and Cleveland Street. 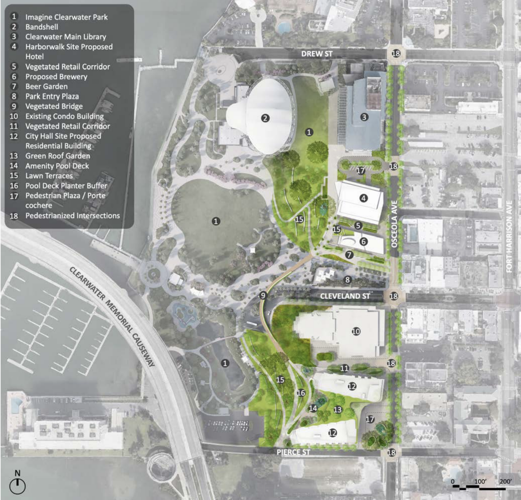 The Bluffs proposes a 13-story, 150-room hotel with 15,000 square feet of retail and restaurant space and two 27-story towers with a combined total of 600 rental units for the 2.6-acre City Hall site. 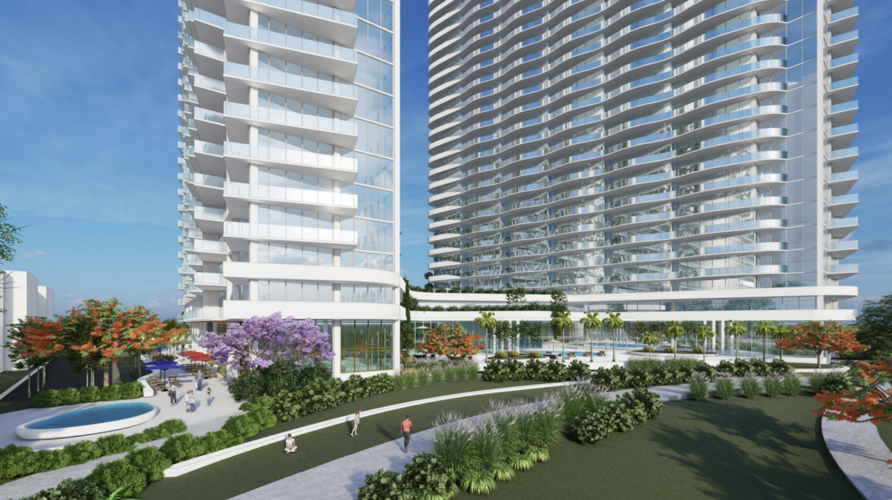 When the City Council on Thursday chooses one of three development groups to transform the downtown bluff, it will be a “once-in-a-generation decision,” according to City Manager Jon Jennings.

The council’s selection must be able to earn residents’ trust by having its plan for the city-owned City Hall and Harborview sites pass a referendum in November.

The city will be counting on their chosen developer to help bring life to the long-struggling downtown with mixed-use projects to surround the $84 million renovation of the waterfront and Coachman Park.

At a work session on Monday, Jennings recommended the council begin negotiating a development agreement with The Bluffs, a team comprised of the New York-based Gotham Organization and The DeNunzio Group of Pinellas County.

For the 1.4-acre Harborview site, The Bluffs proposes a 13-story, 150-room hotel with 15,000 square feet of retail and restaurant space, a conference center, a rooftop bar and pool and a below-ground garage.

The group pitched two 27-story towers with a combined total of 600 rental units for the 2.6-acre City Hall site, with 25,000 square feet of retail and restaurant space and below-ground parking.

The Bluffs offered to buy the former City Hall site for $15.4 million and the site of the now-demolished Harborview Center for $9.3 million, according to Gotham vice president Matthew Picket. Any incentives for the developer will have to determined during the negotiations, but some subsidy must be expected, Jennings said.

Gotham CEO David Picket said he would be willing to discuss a lease instead of a sale for the Harborview site but that a purchase of City Hall would be more feasible to obtain financing on multifamily housing.

Jennings said that among the three proposals, The Bluffs’ “visionary project” did the best job of integrating the two parcels into the soon-to-be revitalized Coachman Park. The design also creates view corridors of the Intracoastal Waterway and incorporates a conference center that is needed in the community, Jennings noted.

The recommendation was unanimous among Jennings and a seven-member committee of city staffers.

Mayor Frank Hibbard said he was waiting to explain his preference among the three groups until the public has a chance to comment at the meeting on Thursday. He said he traveled to New York City on April 28 for a business trip and met with Gotham’s CEO while he was there. He toured Gotham West, a $520 million residential, school and food hall project.

Council member Mark Bunker said he believes The Bluffs' proposal has the potential “to break this 50-year curse,” referencing the Church of Scientology’s presence downtown that has discouraged businesses and private investment for decades.

Chicago-based GSP Development proposed building 504 units across the two parcels with retail, restaurant and civic space. Jennings said staff determined the proposal did not have enough housing units. Its financial offer also fell flat at $3.5 million for the two sites with no request for subsidy.

The third applicant was Elevate Clearwater, a team of many partners including Ken Stoltenberg, who has multiple projects in Tampa’s Channel District; Atlanta-based ECI Group; and Clearwater investor Daniels Ikajevs. The group proposed a 200-room hotel for the Harborview site and 388 apartments and townhomes in a 24-story building for the City Hall site with retail, a culinary incubator and a grocer.

Jennings said the configuration of Elevate’s buildings blocked views of the Intracoastal. The team proposed buying the City Hall site for $15.4 million with incentives including tax abatement for 10 years, waiver of all impact fees, $5 million for parking and reimbursement of demolition costs.

For the Harborview site, Elevate proposed a 65-year lease and incentives of a $6.8 million no-interest loan, $900,000 for parking and waiver of impact fees.