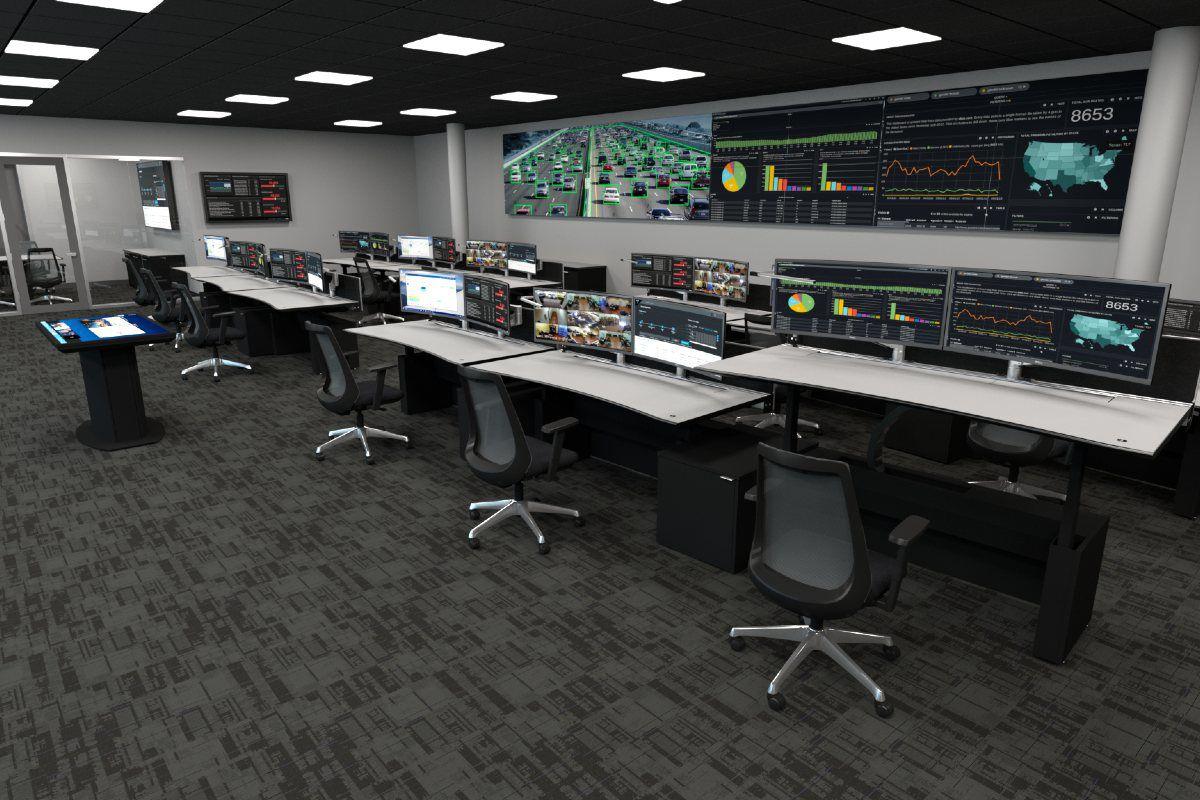 Wall screens that display video from traffic cameras at intersections and other city locations will be at the center of the Clearwater Police Department’s proposed Real Time Crime Center. Future collaboration with the Pinellas County Sheriff’s Office and other police agencies, as well as agreements with local hotels and banks, will result in a stronger net for responding quickly to events and halting emerging threats, police Chief Dan Slaughter said.

Wall screens that display video from traffic cameras at intersections and other city locations will be at the center of the Clearwater Police Department’s proposed Real Time Crime Center. Future collaboration with the Pinellas County Sheriff’s Office and other police agencies, as well as agreements with local hotels and banks, will result in a stronger net for responding quickly to events and halting emerging threats, police Chief Dan Slaughter said.

It seems an unremarkable series of digits, but they represent a primary data point for saving a child’s life.

KUSK23 is the plate number on a van carrying a Miami man and the one-week old he abducted from the scene of a triple homicide in January. In spite of an Amber Alert texted to millions of cell phones, calls for help over radio, TV and highway message signs statewide, as well as foot searches by police, K9 units and helicopters flying above, the van was not spotted in time.

Unfortunately, the search did not end well. The man killed himself near Interstate 75 in Blanton. Worse, the baby’s fate is still unknown.

“There’s a situation most recently that I found troubling,” Clearwater Police Chief Dan Slaughter told the City Council on Feb. 18. “That is the abduction of a child from Miami and that van that was recovered up in Pasco County. I find it problematic that we could be looking for that and not find that on a camera all the way from Miami to Pasco County. The technology for that exists.”

The technology Slaughter is talking about is included in a real-time crime center (RTTC). The operations centers are familiar to fans of TV crime shows: a dedicated operations room with big screens on the wall that link to and monitor, in real-time, closed-circuit TV cameras at major intersections and other locations. The centers also can pop information onto the screen as the police officers request it, drawing from data sources across government and civilian networks.

Slaughter is about to get the technology he was talking about: The council on Feb. 21 approved $326,201 for the hardware and software for a high-tech operations center for Clearwater police. The visualization platform, video analytics software servers, desktop computers and the software that links and operates the RTTC will come from Millenium Products Inc. in St. Petersburg.

“We now have vast amounts of data and information that can be difficult to manage in real time,” Slaughter told the council work session. “Our communications center has access to all the traffic cameras in the city on the major thoroughfares, but … we don’t have dedicated staff that are analyzing that very accessible information,” he said.

The system will eventually link Clearwater Police to closed-circuit cameras at such city properties as marinas, parking lots and garages, the Clearwater Airpark, and other locations. The city would seek partnerships with banks, hotels and other private entities to allow police to link to their cameras, Slaughter said. It could conceivably link to live feeds from the Pinellas County Sheriff’s Office helicopter or a police officer’s body cam, though Clearwater police don’t wear body cams.

The main role for the system is to quickly access a camera feed near where a crime or other incident occurs.

“As a call comes in they’ll see that call on the map … and see the closest cameras and get real-time situational awareness,” Slaughter said.

It’s great to have an instant live view of an area where police are responding to a crime; it’s another to access and display information stored on a limitless number of other devices. That’s what the Millenium system is capable of doing: layering data on the screens as officers in the operations center request it.

Images from license plate readers in parking garages and other locations; information from automated vehicle locators; criminal databases and civilian records management platforms; E-911; and geographical mapping systems are but a sample of what can be displayed on the big screens in the room.

A system’s capabilities are limited by the software tools and databases police departments pay to access. Slaughter described his proposed system as basic, lacking all the bells and whistles. The system is designed to improve his department’s ability to identify and intervene in public safety matters earlier and with a greater level of situational awareness.

The heart of the wall screen display is Live Earth, developed by the company with the same name. Live Earth originally built the technology for U.S. Special Operations Forces to bring real-time data feeds onto a single interactive map. The high-octane military version can display details of the battlefield, where the good and bad guys are, and the location of tanks, aircraft, other assets, and much more.

Though not related to Google Earth, the Live Earth company’s mapping resembles that product on steroids. Stripping away the tech language, the system is tied to the Internet, so anything available online can be accessed — court records and criminal mug shots, a suspect’s Facebook page and other public social media apps — and displayed on the wall screens as the users requests it.

Slaughter, however, cautions against overstating the capabilities of the RTTC he proposes for the Clearwater Police Department, characterizing it as a much-less-sophisticated system than what is depicted on TV crime dramas.

Millenium’s invoice shows the city’s RTCC will include a 65-inch and a 46-inch TV screen for displaying interactive maps and data. The platform combines information from a wide array of sources, such as video feeds, sensors, alarms, crime databases, and even social media. The wall screens can be activated by touch; for instance, tap a point on the map and up pops a window with a live video stream of an intersection. Users can rewind, pause, zoom, and review videos with Live Earth’s interactive timeline with the swipe of a hand. In Clearwater’s case, traffic cameras at intersections often don’t record, which limits the department’s ability to review videos, Slaughter said.

Other law enforcement employees will have the ability to sit at desktop computers in the RTTC and access data as a supervisor directs the mission.

The RTTC also will allow the quick allocation of resources to the right places during hurricanes and other natural and manmade disasters, Slaughter said.

Clearwater Police will also use the RapidView product by BriefCam Corp., which includes face recognition software. The feature can analyze images within a single video stream from a mall or crime event; it does not use facial images to search the FBI’s criminal database or other watch lists, the police chief said.

“The product is a video-analytic, so it could help analyze video for faces in single video’s data,” Slaughter said. “So, say I had the security video from the library, and I saw a suspect enter the entrance. The product would analyze the data from all the library cameras and show me other frames the suspect was possibly in. In addition to faces, it can analyze for matching color of clothing or things like that. So, it has a facial recognition component, but it isn’t going to search faces against a database of wanted persons or driver’s license photos to attain a name.”

There are limitations to Clearwater’s system, as there are at other departments’ RTTCs: Live-streaming satellite footage is not yet available. That capability would greatly improve policing, the International Association of Police Chiefs said.

According to Police Chief Magazine, “When live-streaming satellite footage becomes available, incidents that currently plague municipal police departments like vehicle and foot pursuits would no longer be necessary as the suspects’ actions could be monitored live and the need to engage in pursuits would be decreased.”

Slaughter said he would limit which officers have access to the RTCC.

“We’ve created some very good controls. It will include a small core group of employees, not (be) a center that’s accessible to everybody,” he told the council. “It’s going to be very specific on the types of calls and the activities we’re trying to address in real time.”

A Clearwater police officer visited six Florida police jurisdictions to see how well the system worked in those districts, Slaughter said. The employee surveyed each department to determine which features they didn’t find useful and which applications they wish they had more access to.

“This will allow us to be more efficient in the future; the research he has done allows us to create this package to fit what Clearwater needs,” Slaughter said.