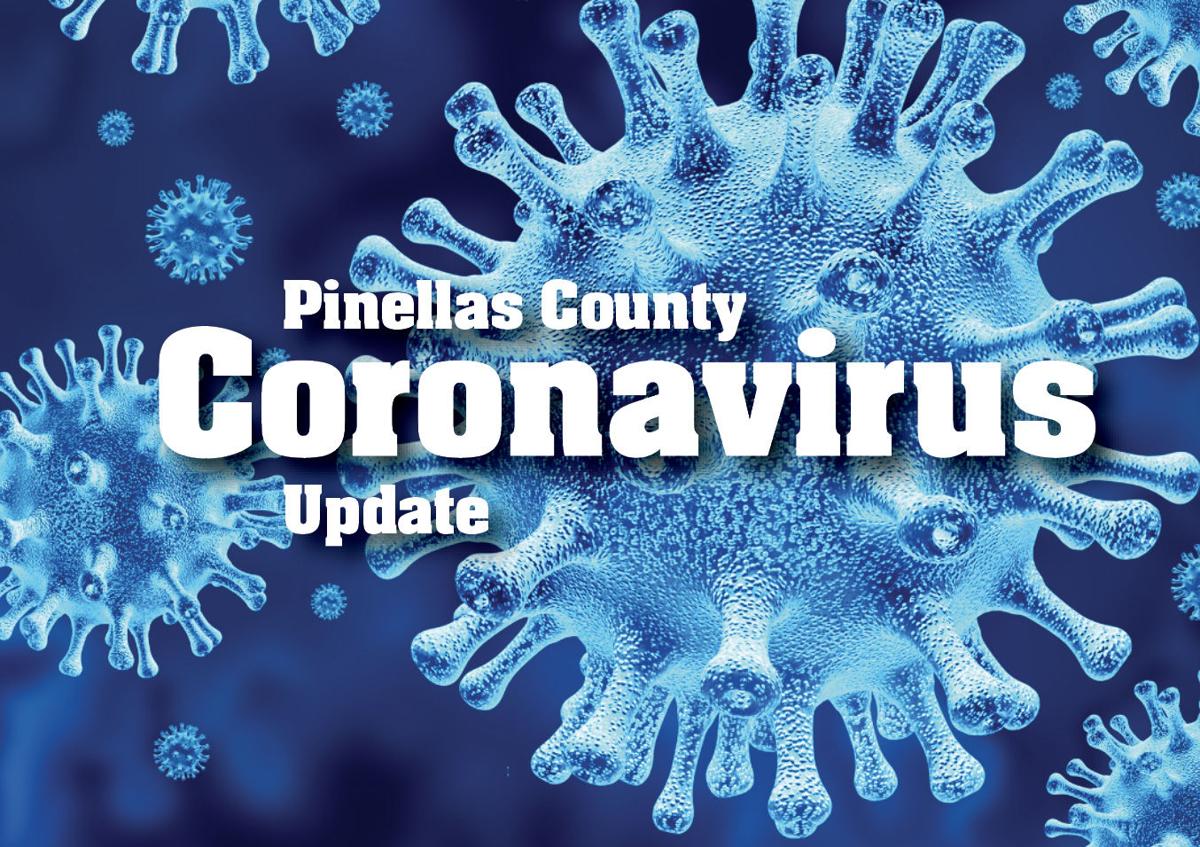 Pinellas County cumulative total of confirmed cases of COVID-19 has increased to 801, according to the report released Wednesday morning from the state Department of Health. The county’s death toll stands at 50. 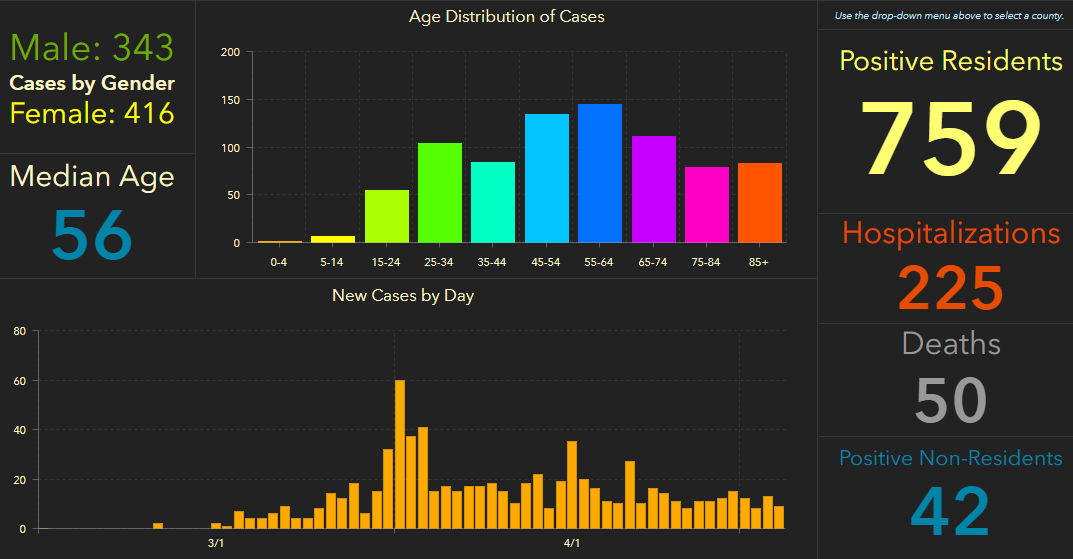 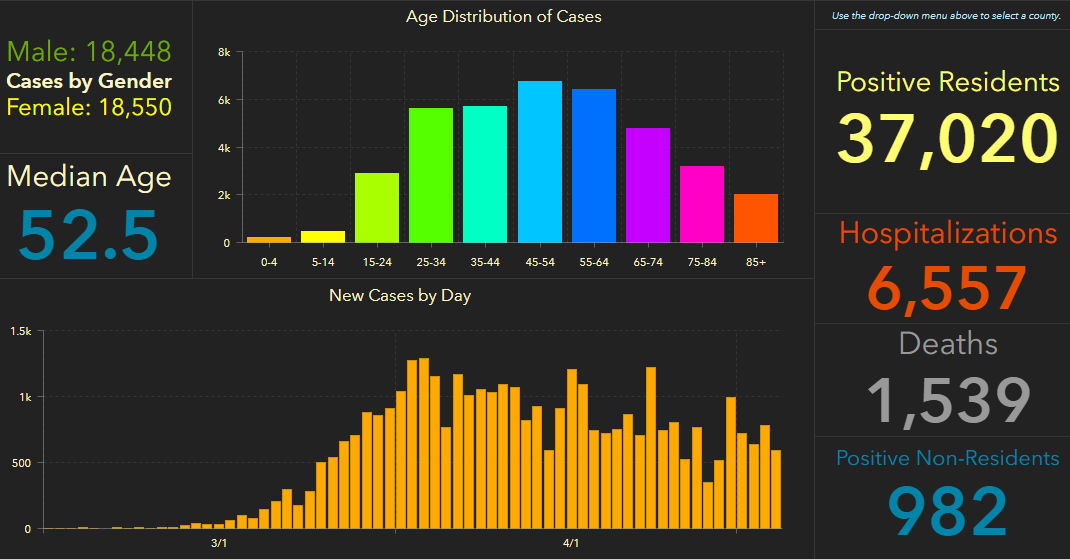 Six more people have died due to the novel coronavirus in Pinellas County, according to the report released Wednesday by the Florida Department of Health. The county’s death toll is up to 50. Thirteen additional COVID-19 cases were confirmed, bringing the count to 801.

As of Wednesday morning, 17,552 people had been tested for the coronavirus in Pinellas, 442 more than the day before. DOH say an average of 4.6% of test results were positive. Ten tests were inconclusive and results were pending for 298.

Community Health Centers of Pinellas is offering free COVID-19 tests without restrictions at three locations. Residents do not need to have symptoms or be a CHC patient.

Testing sites will provide same day walk-ups and drive ups, but appointments are recommended to decrease wait times. Make an appointment by calling 727-824-8181 and selecting option 0.

A condensed electronic registration will be required at testing sites. Residents are asked to bring a valid ID.

DOH provided updated and revised information on the city of residence for 747 of the cases in Pinellas on Tuesday. St. Petersburg has the most with 254 cases (34%), 117 are Clearwater residents, 93 from Largo, 91 from Seminole, 60 from Palm Harbor, 31 from Tarpon Springs, 24 from Pinellas Park, 18 from Dunedin, 12 from Safety Harbor, nine each from Clearwater Beach and Oldsmar, six from Indian Rocks Beach, three each from Belleair, Gulfport, Kenneth City and Madeira Beach, two each from Bay Pines, Belleair Beach and Belleair Bluffs, and one each from North Redington Beach, Crystal Beach, Treasure Island, Tierra Verde and South Pasadena.

DOH reported 211 cases in residents and staff in long-term care facilities as of May 4. The numbers do not reflect current infections. At least one case has been reported at 29 facilities. Eighty-eight cases have been reported at Freedom Square Seminole Nursing Pavilion, 13 at Freedom Square Rehabilitation & Nursing Services, 15 at Carrington House of St. Pete, 11 at Patrick Manor and 39 at St. Mark Village in Palm Harbor.

DOH reported six new deaths in Pinellas on Wednesday morning, bringing the death toll to 50. No further information was available. At least 28 of the 50 deaths were residents or staff from one of the county’s long-term care facilities, according to a report from May 4.

The medical examiner’s office released a report May 1 on a 75-year-old woman who died on April 29. She was a resident at St. Mark Village in Palm Harbor

DOH reported three deaths on April 30 and three on April 29. The medical examiner’s office released six new death investigation reports on April 30, including one for a 77-year-old man who died on April 27. He had traveled to Columbia.

The sixth death was a 99-year-old woman who died April 28. She had been a resident at St. Mark Village in Palm Harbor.

DOH announced the death an 87-year-old man on April 27, who had been a resident at St. Mark Village in Palm Harbor, according to the medical examiner’s office.

DOH confirmed eight COVID-19 related deaths in the county from April 21-24. The death of a 92-year-old woman was announced April 24. According to the medical examiner’s office she had been a patient from Freedom Square Seminole Nursing Pavilion.

DOH reported two deaths due to the coronavirus the night of April 23. Both were men. Ages were 95 and 84. According to the medical examiner’s office, the 95-year-old had been a resident of St. Mark Village in Palm Harbor and the 84-year-old man had been a patient at Freedom Square Seminole Nursing Pavilion.

Two deaths were confirmed on the night of April 22. They also were men. Ages were 90 and 75. The 75-year-old had been a patient at Freedom Square Seminole Nursing Pavilion, according to the medical examiner’s report.

DOH reported on the morning of April 22 that a 90-year-old woman had died. According to the medical examiner’s office, she had been a patient at Freedom Square Seminole Nursing Pavilion.

Two deaths were reported on April 21: a 79-year-old man and a 96-year-old woman, another patient from Freedom Square Seminole Nursing Pavilion.

Two deaths were reported on April 17. One was an 84-year-old woman, and the second was a 66-year-old man. Both had been patients at Freedom Square Seminole Nursing Pavilion.

Freedom Square sent out a press release April 17 confirming the deaths and also reported that another patient, a 74-year-old man, had died on April 11.

DOH reported on April 14 that an 80-year-old man who had traveled to New York had died due to the coronavirus.

Pinellas County extended its local state of emergency through May 15. The local safer-at-home order was rescinded and the county will follow the statewide orders that began May 4. Commissioners voted on April 28 to reopen public swimming pools with restrictions and playgrounds are open at daycare centers. Beaches opened on May 4. Social distancing is required.

The number of confirmed cases in Florida residents was up to 37,020 on Wednesday morning. Another 982 cases were reported in non-residents, bringing the state’s total to 38,002 — 563 more than the number reported on Tuesday.

The number of deaths in Florida increased to 1,539, which is 68 more than the number reported the day before.

DOH reports that 6,557 have been hospitalized statewide.

Persons ages 65 and older and those with chronic medical conditions are advised to stay home as much as possible as that population is most vulnerable and at risk from COVID-19.

Some of the changes in the new order include allowing retail establishments to open at 25% capacity. Restaurants can open their indoor dining rooms at 25% capacity and serve food and drink in outdoor areas with tables spaced 6 feet apart. Bars, gyms and fitness centers remain closed as do businesses that provide personal services.