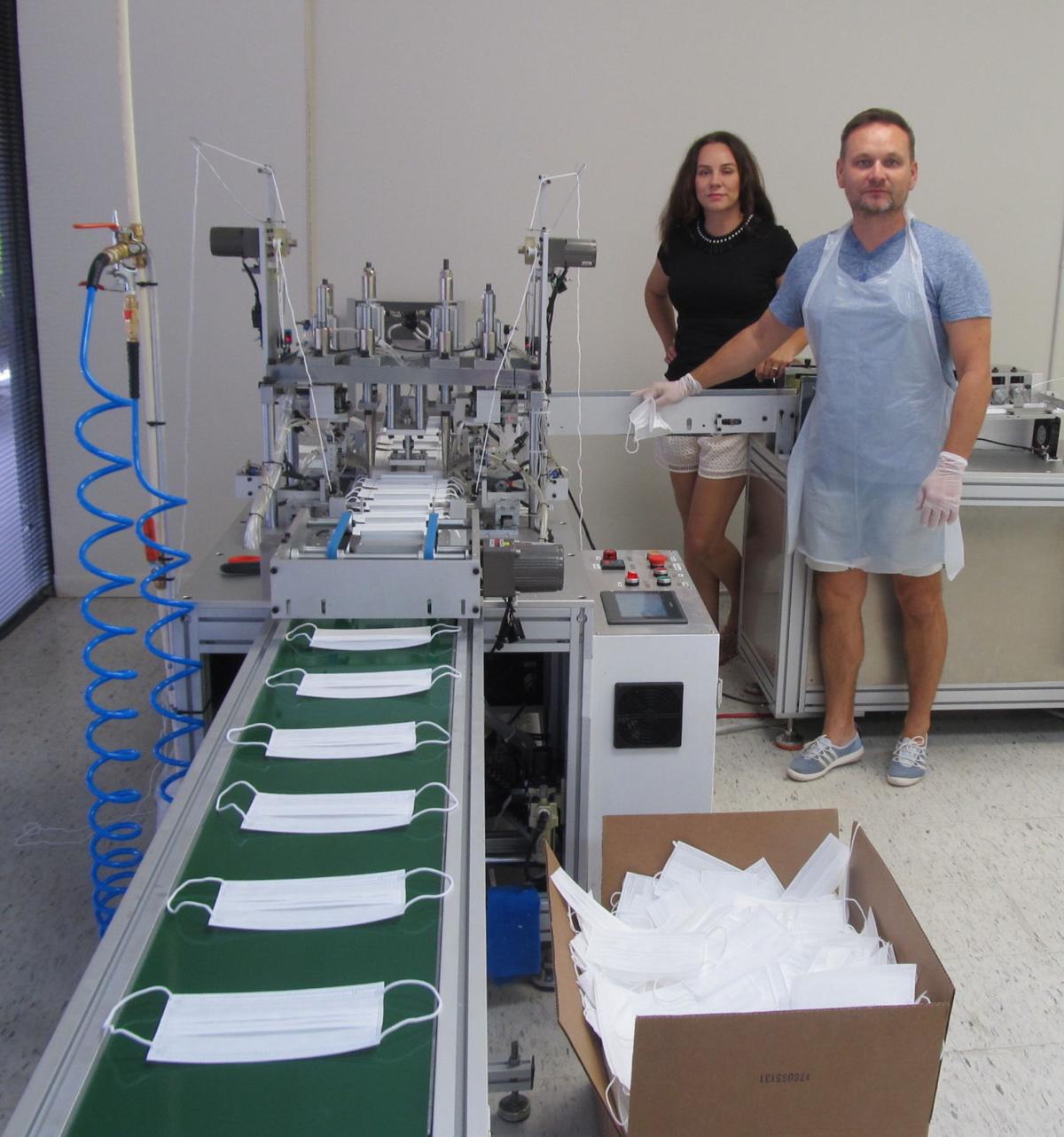 Eva and Waldemar Kubiak stand by the automated mask-making machine to combat the spread of the coronavirus. The couple wanted to find a way to help, so they launched a manufacturing firm in Largo. 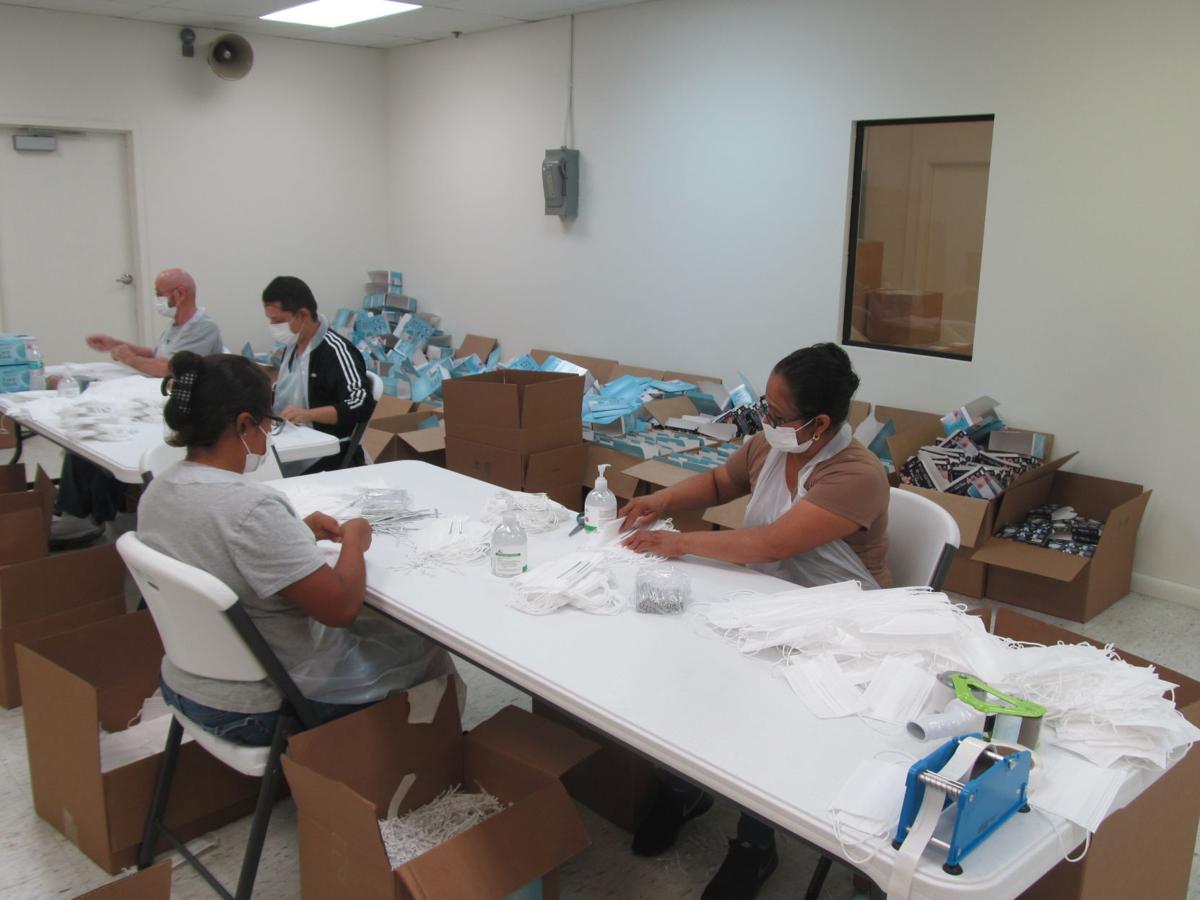 Workers put the finishing touches on the masks before they pack them in boxes to be shipped. 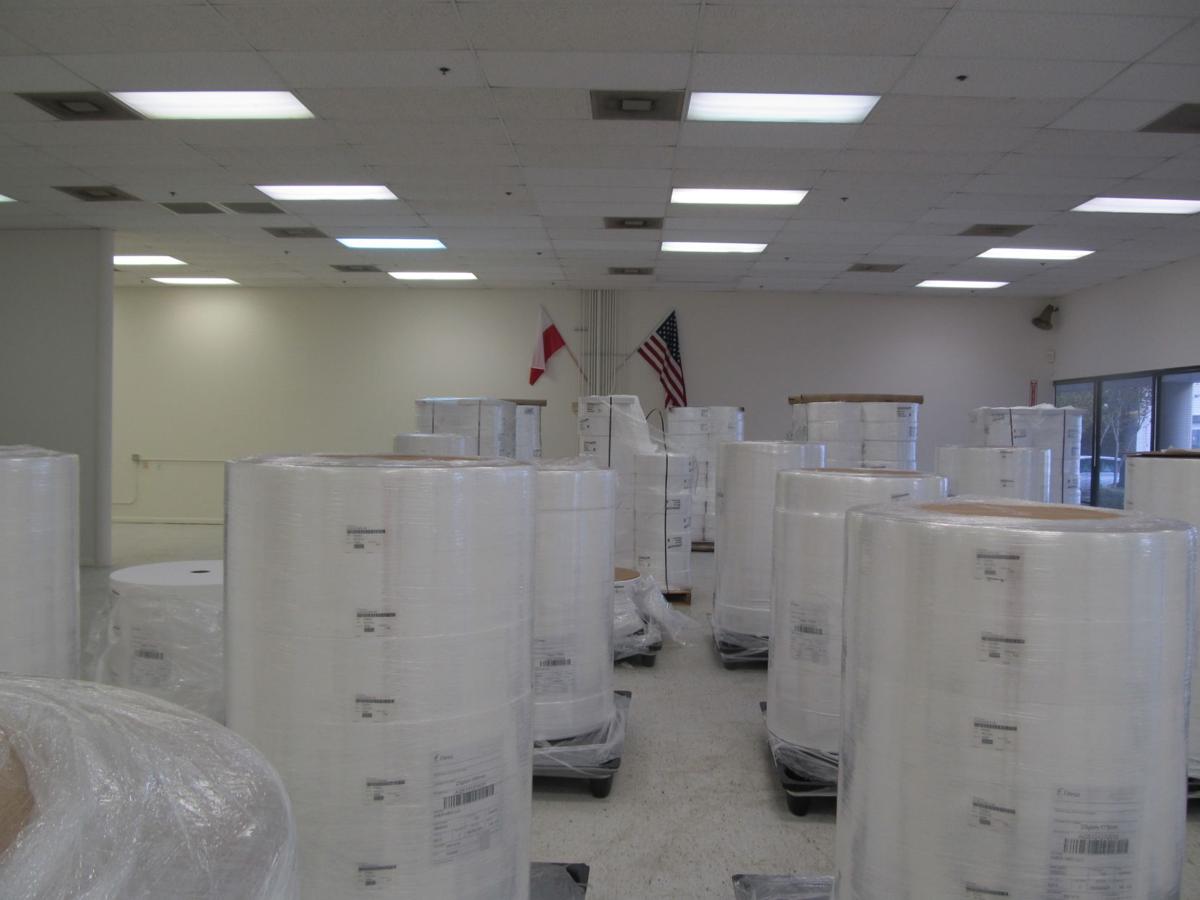 The Polish and American flags fly above the storeroom of packing material for Amer Med face masks to combat the spread of the coronavirus.

Eva and Waldemar Kubiak stand by the automated mask-making machine to combat the spread of the coronavirus. The couple wanted to find a way to help, so they launched a manufacturing firm in Largo.

Workers put the finishing touches on the masks before they pack them in boxes to be shipped.

The Polish and American flags fly above the storeroom of packing material for Amer Med face masks to combat the spread of the coronavirus.

LARGO — When Eva and Waldemar Kubiak immigrated to the United States from Poland 20 years ago they knew that someday they would give back to their new country. They settled in Chicago and went about the business of living, wondering when they might get the chance to say thank you.

Little did they know it would take a pandemic and thousands of deaths to give them the opportunity to fulfill that promise made two decades ago.

The couple moved to Clearwater Beach from Chicago just over a year ago. The warm weather brought them to Florida as it does for so many people.

As a couple that always operated their own business, they set about finding something to operate in Florida. In Chicago, they owned a downtown tour boat business so they thought, why not?

In Clearwater Beach, they went into the tour boat business and now operate three boats out of the marina.

“In order to get a spot in the marina, you had to buy out somebody who was already there,” said Eva. “So that is what we did.”

All was going smoothly until the coronavirus hit, and everything came to a standstill. Businesses were shut down, tour boats in Clearwater Beach were tied up to the dock.

The Kubiaks suddenly had time on their hands and that is when they saw the opportunity to fulfill their promise.

“We were watching the whole situation,” said Eva. “We saw what was happening in Europe; they had problems with not enough personal protective equipment. There were nurses who were wearing the same mask for weeks.”

Kubiak said she and her husband asked each other what could they do to help? Admittedly, they were never in the PPE manufacturing business but they decided to forge ahead anyway. Their plan was to manufacture face-masks that would become so important in fighting the virus.

“It turns out the masks were needed around here,” she said.

“We made the decision right then and there. One day we were talking about it, the next day we were searching for the machines.”

To begin the process of determining if there was a market in Pinellas County, Kubiak said the first thing she did was write to Clearwater Mayor Frank Hibbard.

“I got an answer the next day,” she said. “He referred me to the Economic Development department and within a week we were in touch with half of Clearwater.”

Hibbard said he is there to help, so getting back to people quickly is his job.

“We want people to be successful,” he said. “What they proposed was something that was needed in the market and nationwide.”

That search for the appropriate machine to make the masks turned out to be a difficult part of getting things up and running.

“That was a struggle,” Eva said. “There were delays, missing parts and issues like that. Eventually, the machine got ordered.”

If that wasn’t hard enough, the big hurdle had yet to come, finding the appropriate fabric for the masks.

Finding it was one thing, getting it quite another.

“China holds 80% of the fabric, but remember trade with China has been shut down, so we had to find the main fabric elsewhere,” she said.

She explained that the main fabric is the one that filtrates the air and is made from melted plastic, which is a complicated and expensive procedure.

“Outside China, the fabric is made in India, Turkey, the Czech Republic, Germany and Japan,” she said. “We also discovered two companies in the United States that make it as well so we are doing business with them.”

With the machine on the way and the fabrics ordered, there was one last hurdle to be overcome. Where to make it all happen.

Kubiak said although they lived in Clearwater and the mayor and city officials had been helping them throughout the process, there just wasn’t an appropriate site for their manufacturing business.

“It was then Pinellas County got involved,” she said. “They reached out to the brokers and I was surprised it all happened so quickly. They found a property in Largo. It is good, big, clean and air conditioned. We were ready to go.”

Hibbard admitted that he had hoped they could have located in Clearwater, but when it became obvious that there was no appropriate space in his city, then it was important to keep them in Pinellas County.

“The point is to help people be successful,” he said. “Perhaps someday Largo or Pinellas County will reciprocate.”

At the Amer Med facility on Tall Pines Drive, Waldemar Kubiak was hard at work keeping an eye on the automatic machine making the masks. He is obviously proud of their product and is quick to compare his masks with one from China.

Eva Kubiak said they already have their first order for masks, a substantial order from Pinellas County.

“They are talking about needing masks for school children,” she said. “They are also considering handing out free masks at the airport.”

As for the future, Kubiak says there are already two more machines on order and they are hoping to extend the lease on the Tall Pines property.

She says nobody knows how many masks will be needed throughout the region or the state but for now they are concentrating on Pinellas County so the local needs can be satisfied first.

Kubiak is confident her company can obtain FDA certification, which requires certified masks to achieve 98% filtration.

The promise to give back to their adopted country is being kept through the manufacturing of protective masks to fight the spread of the coronavirus.

Their company is Amer Med LLC at 2310 Tall Pines Drive in Largo.