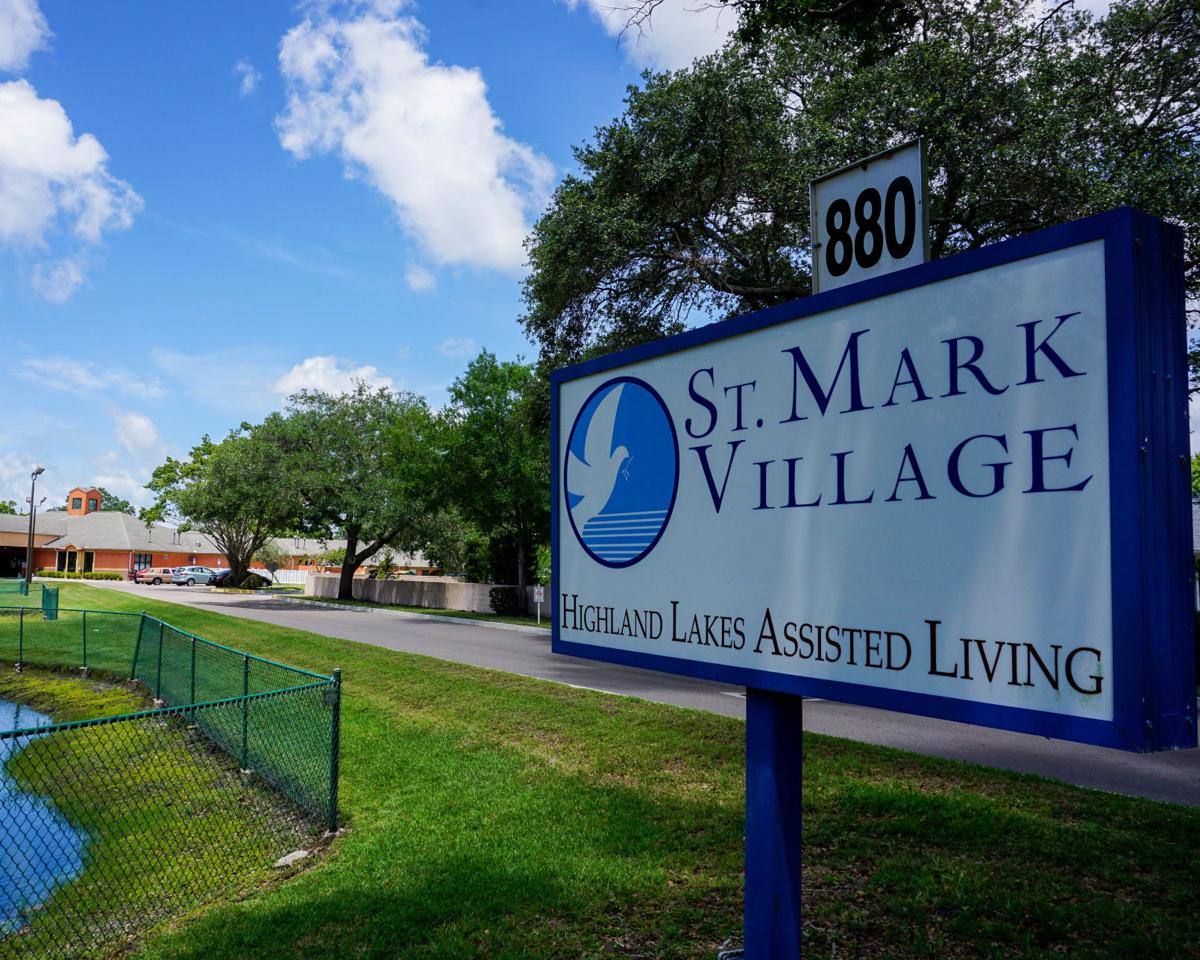 St. Mark Village in Palm Harbor is one of two long-term care facilities in Pinellas County where multiple residents have died of COVID-19. 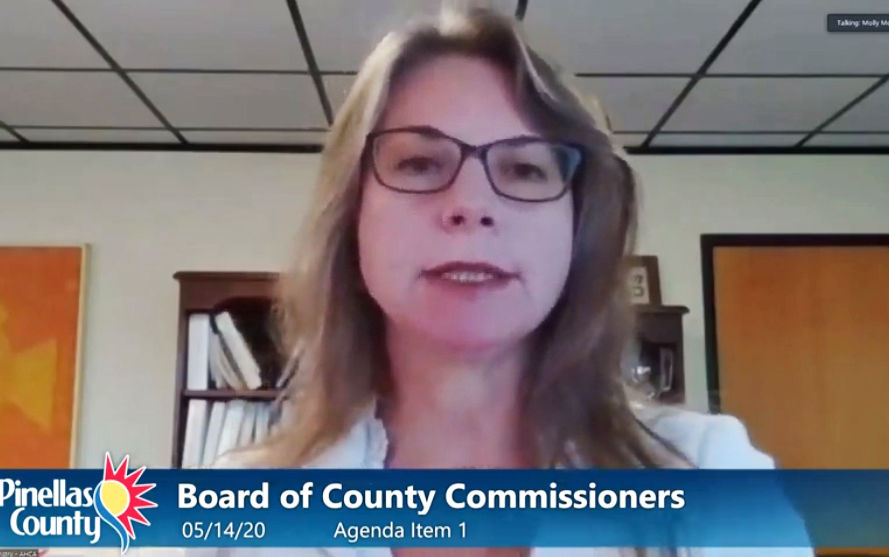 Molly McKinstry, AHCA deputy secretary of the Division Health Quality Assurance, talks about what the Agency for Health Care Administration is doing at long-term care facilities to combat the growing number of cases of COVID-19 during a May 14 County Commission meeting.

St. Mark Village in Palm Harbor is one of two long-term care facilities in Pinellas County where multiple residents have died of COVID-19.

Molly McKinstry, AHCA deputy secretary of the Division Health Quality Assurance, talks about what the Agency for Health Care Administration is doing at long-term care facilities to combat the growing number of cases of COVID-19 during a May 14 County Commission meeting.

CLEARWATER — Pinellas County commissioners spent a portion of a May 14 meeting discussing the recent increase in COVID-19 cases at long-term care facilities and the need for more testing, among other concerns.

Dr. Ulyee Choe, director of the Department of Health in Pinellas, went over some of the latest data about COVID-19 cases in the county. He used a summary from the state DOH from May 12 that shows a continuing increase in cases. He said many were from long-term care facilities.

A summary released May 14 shows 33 new cases on March 12 and 36 on March 13. Commissioners received emails on May 12 and 13 reporting 10 cases at St. Petersburg Nursing and Rehabilitation and 36 from Gulf Shore Rehab in Pinellas Park.

Choe said efforts at long-term care facilities were “top priority,” and talked about the partnership with members of the long-term care task force, which include DOH, Agency for Health Care Administration and the county’s fire and emergency medical services personnel.

He said fire and EMS personnel had been to more than 200 facilities in the county, including visits to some more than four or five times. He said a checklist is used to make sure staff at the facilities is trained on infection control and prevention.

In addition, more testing is going to start soon at the facilities thanks to a new partnership with a lab that can return results within about two days, he said.

He said AHCA recently pushed out new rules, including one that says facilities without the capability to isolate or care for COVID-19 cases have to transfer patients to a facility that can. Because of that, he said, the county would likely see an increase in patient transfers.

Molly McKinstry, AHCA deputy secretary of the Division Health Quality Assurance, said a member of her staff participates in daily calls with the county’s task force. She also said her agency is stepping up its outreach at long-term care facilities.

Ensuring quality infection control is a big part of her work and her staff also does regulatory visits in areas with concerns.

She talked about regional collaborations with hospitals in terms of infection control and response. She said new rules call for testing of patients prior to them going to long-term care facilities even if they don’t have symptoms.

In addition, if a long-term care facility needs testing by DOH or the National Guard, all staff must participate, even those not on-shift, she said.

She also talked about the new rules that require facilities that are unable to isolate COVID-19 positive patients or provide infection control to transfer them to a facility that can, which could be a local hospital.

Commissioner Janet Long said it is known that some of facilities in Pinellas do not have protocols or infection control measures, and some don’t have the supplies they need. She asked what AHCA was doing to make sure they are doing what they should.

McKinstry said AHCA is working closely with DOH, which has the authority to respond to outbreaks and reports of those not following protocols. She said the facilities with COVID-19 cases need infection control beyond what they would normally provide. If they can’t do it, strike teams are sent in to help and also to assist with supplies.

“It’s important that staff understand how to care for these patients, and if not, they need to transfer them,” she said.

Commissioner Charlie Justice asked about training and retraining of staff by the strike teams. He also asked if employees were made aware of their personal responsibility to take care after they leave the job to not get infected.

“After they clock out, the responsibility doesn’t end,” he said. “They can bring it (COVID-19) back in.”

He said employees need to have a higher standard off the clock to stay safe.

McKinstry said the governor did talk about that at a recent press conference. She said it is an issue for residents because they can’t have visits from their families due to the restrictions. She also said significant policies were under development in that area.

Commissioner Dave Eggers thinks that long-term care staff has not been trained as well as they should have been, although there are efforts now that are a “step in the right direction.” He said going forward a better job needs to happen with communication.

He is disappointed about the lack of testing and information about the testing.

Long asked about hospital capacity, saying she had heard that ICU beds were 90% full due to elective surgeries. As of May 14, ICU bed availability was 21% among all hospitals in Pinellas.

Hospitals have been given flexibility to reconfigure beds to provide services as needed for long-term care patients, McKinstry said. Additional work also is ongoing to find alternative care facilities.

Long said she was “baffled by the lack of accountability” in data, particularly information about testing.

She questioned whether the county had enough tests and people just weren’t getting tested or if there was a shortage of tests.

“We’ve been working on this for two months, and we know we have a huge void,” she said.

She said lack of testing concerns her, especially as talks continue about moving forward and reopening.

Choe said the number of positive cases and test availability was fluid and changes day-to-day. On the question of ICU beds, he said it varies by hospital with some having 25% capacity and others may be down to 10%.

On testing, he said Community Health Center of Pinellas, which now has four sites available for free testing, still has capacity to test more. Staff is working on putting together better reports on testing in the county.

Commissioner Ken Welch is concerned that the message about testing is not getting to the public.

“There is demand out there,” he said.

He too is concerned as things move forward on reopening that testing be available for everyone who wants to be tested.

Choe said more testing sites would be opening next week.

Commissioner Karen Seel wants to improve the information on the county’s website so the public can see all the testing sites and know if they are public or private, as well as the criteria for getting a test at each one.

“I’d like to see a very specific list of testing sites,” she said, adding that she is worried about a demand for supplies if there is a surge in cases.

Commissioner Charlie Justice said some residents are worried that if they get tested, they’ll take away from the supply and a test might not be available for someone who needs it more.

Choe said enough tests were available right now that everyone who wants one can get one.

“This is a long-term issue. It’s not going away,” he said.