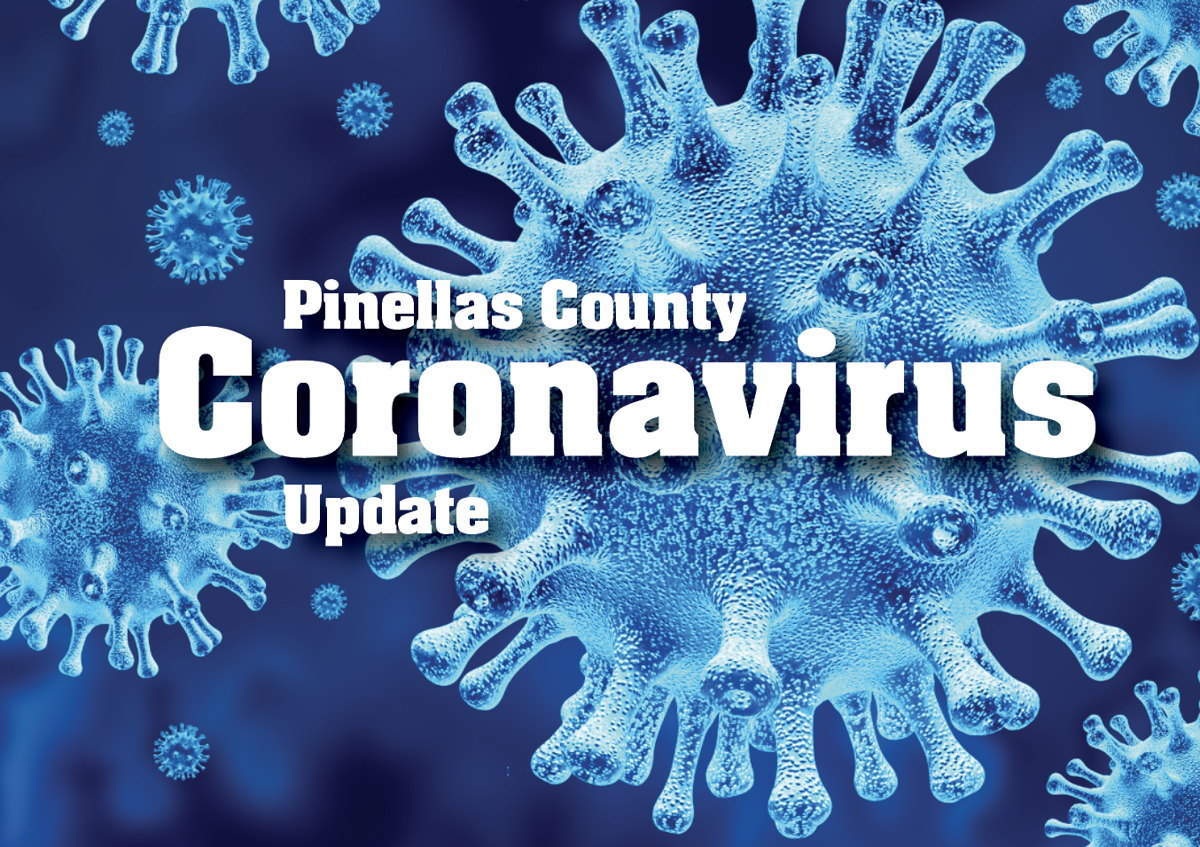 Pinellas County’s cumulative total of confirmed cases of COVID-19 has increased to 1,638, according to the report released Monday from the state Department of Health. The county’s death toll stands at 95. 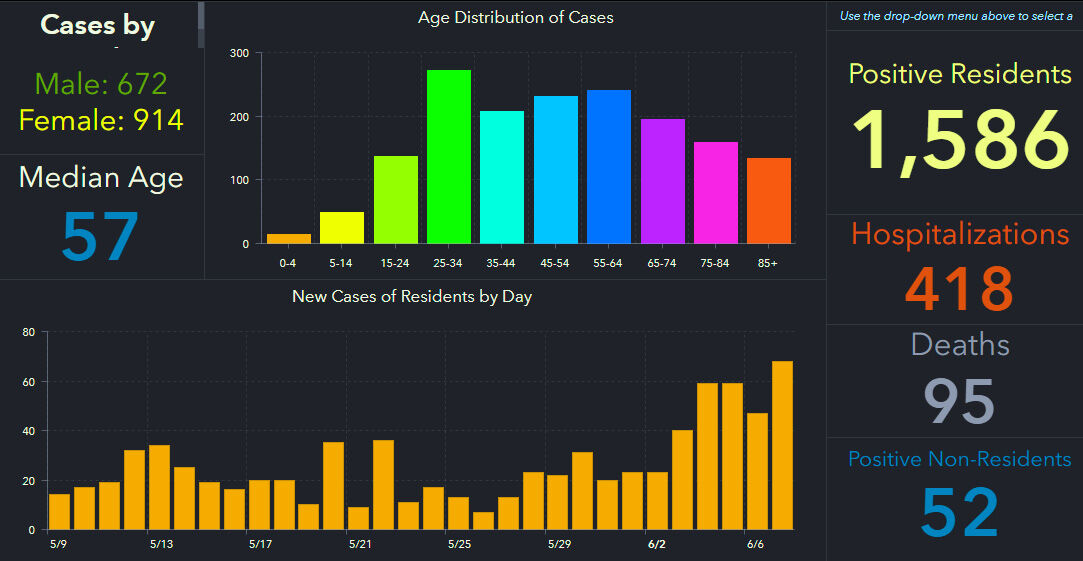 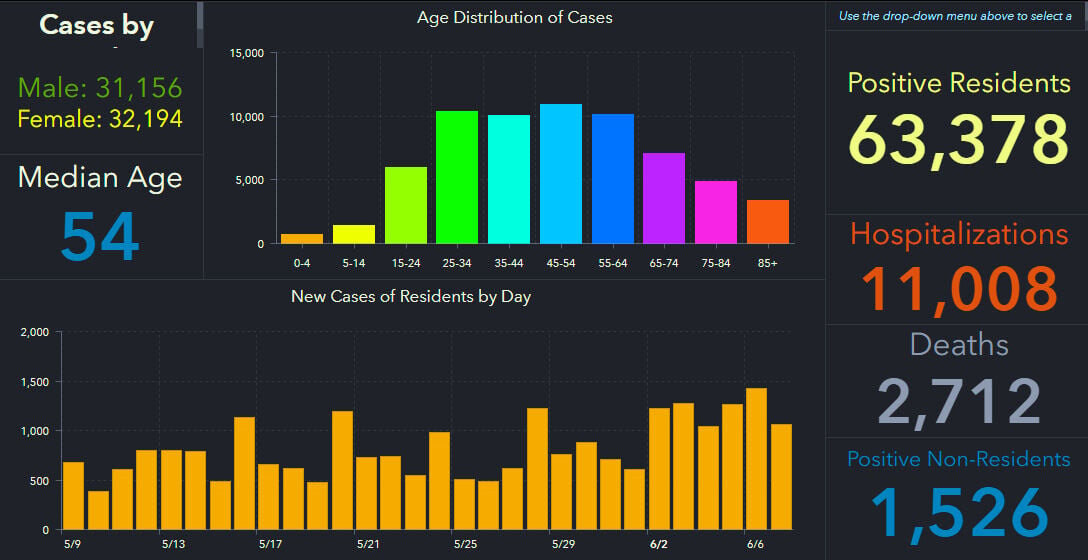 Pinellas County started a new week with another 54 COVID-19 cases added to the count to total 1,638, according to the information released Monday by Florida Department of Health. The death tolls stands at 95.

DOH reported on June 8 that 52,805 COVID-19 tests had been done in Pinellas, 1,545 more than the day before. DOH says an average of 3% of test results were positive. Fourteen tests were inconclusive and results were pending for 140.

DOH provided updated and revised information on the city of residence for 1,526 of the cases in Pinellas on Sunday. St. Petersburg has the most with 665 cases (43.5%), 231 are Clearwater residents, 182 from Largo, 143 from Seminole, 76 from Palm Harbor, 75 from Pinellas Park, 38 from Tarpon Springs, 25 from Dunedin, 16 from Safety Harbor, 14 each from Oldsmar and Clearwater Beach, 11 from Indian Rocks Beach, seven from Kenneth City, six from South Pasadena, five from Gulfport, four from Madeira Beach, three from Belleair, two each from Bay Pines, Belleair Beach and Belleair Bluffs, and one each from Indian Shores, North Redington Beach, Crystal Beach, Treasure Island and Tierra Verde.

DOH reported 265 cases in residents and 143 in staff at the facilities as of June 6. The numbers do not reflect current infections.

DOH reported on June 6 that 82 cases had been reported by Gulf Shore Care Center, 72 cases by St. Petersburg Nursing and Rehab, 55 cases had been reported by Freedom Square Seminole Nursing Pavilion, 29 by St. Mark Village nursing home in Palm Harbor, 34 by Carrington Place of St. Pete, 23 by Freedom Square Health Care Center in Seminole, 24 by Health and Rehabilitation Centre at Dolphins View in South Pasadena and 10 each by Patrick Manor in St. Petersburg and Marion and Bernard L. Samson Nursing Center in St. Petersburg. The rest had less than 10 cases.

At least 70 of the county’s 95 deaths were residents or staff at one of the county’s long-term care facilities. According to a weekly report from DOH released June 6, 25 deaths were from Freedom Square Seminole Nursing Pavilion, including one staff member; 13 from Gulf Shore Care Center; 11 deaths from St. Mark Village; six from Freedom Square Rehabilitation & Nursing Services; four from Patrick Manor; three from St. Petersburg Nursing and Rehab and three from Health and Rehabilitation Centre at Dolphins View; two from the Inn at Freedom Square. In addition, one death each was reported at Bardmoor Oaks Healthcare and Rehabilitation Center in Largo, Bay Tree Center in Palm Harbor, Palm Garden in Clearwater and Palm Garden of Pinellas. Palm Garden in Clearwater tells Tampa Bay Newspapers it has no deaths.

DOH reported on June 5 that four more county residents had died, bringing the death toll to 95. According to the detail report, the deaths included an 85-year-old man, an 87-year-old woman and a 73-year-old man. No information was available for the fourth.

District Six Medical Examiner’s office released one death report on June 5 for an 85-year-old man who died June 4 from Health and Rehabilitation Centre at Dolphin View. DOH reported June 4 the death of an 89-year-old woman.

Pinellas County Commission voted June 5 to extend the local state of emergency through June 19. Commissioners have lifted local restrictions at beaches, swimming pools and playgrounds; however, statewide orders remain in effect, which include social distancing, capacity and sanitation requirements. Commissioners urge the public to wear cloth masks when in large groups, such as the recent protests, and in enclosed public spaces.

The number of confirmed cases in Florida residents was up to 63,378 on Monday. Another 1,526cases were reported in non-residents, bringing the state’s total to 64,904— 966 more than the number reported on Sunday.

The number of deaths in Florida increased to 2,712, which is 12 more than the number reported the day before.

DOH reports that 11,008 have been hospitalized statewide.