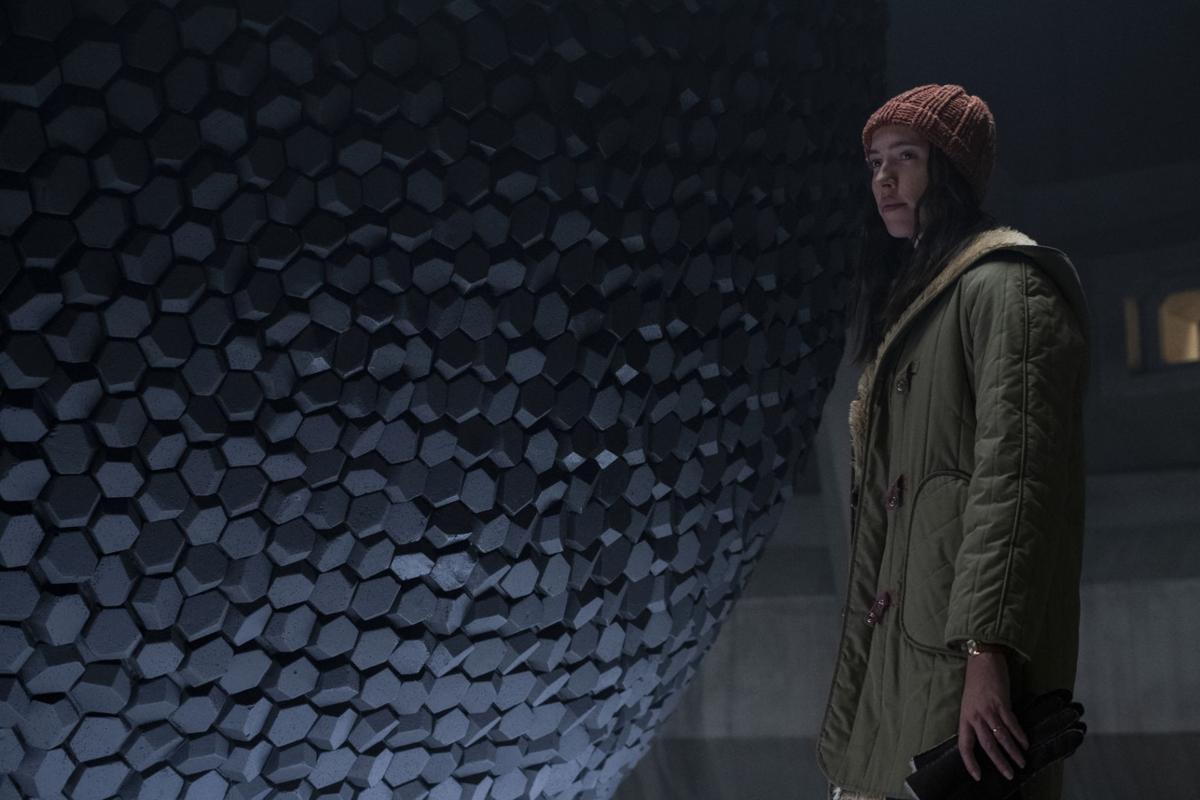 Rebecca Hall portrays Loretta in Amazon’s “Tales from the Loop.”

Sometimes, setting peculiar stories against an aesthetically pleasing backdrop helps to establish a stylized narrative. In “Tales from the Loop,” the environment plays a critical role with its bucolic scenery and idyllic small-town charm punctuated by odd bits of high-tech debris scattered about the countryside. Unfortunately, neither the stylish elegance nor the rampant strangeness of this American science fiction drama television series can atone for its many shortcomings.

“Tales from the Loop” premiered April 3 on Amazon Video. Unsurprisingly, the series was inspired not by literature but by artwork. Specifically, it is based on the eponymous art book by Simon Stålenhag.

Stålenhag is best known for creating digital images focused on stereotypical Swedish countryside environments with aberrant science fiction elements. Translation: Much of his work features gargantuan robots and unwieldy neo-futuristic machinery situated in ordinary — often pastoral — surroundings. The artwork initially inspired a role-playing game that made its debut in 2017 from Free League Publishing.

Along comes Nathaniel Halpern, the screenwriter who worked previously on shows such as “Legion,” “Outcast” and “Resurrection.” Halpern wrote all eight episodes of “Tales from the Loop.” He also serves as one of the shows many executive producers.

The official description of “Tales from the Loop” certainly sounds intriguing. According to the synopsis, the Loop is a “machine built to unlock and explore the mysteries of the universe, making things possible that were previously relegated only to science fiction.” In a short introduction presented as part of the first episode, Jonathan Pryce — who portrays Russ, the man who runs the Loop — offers a somewhat more vague explanation of operation and explains that the series will examine the lives of individuals living in the town above the Loop.

If you happen to be old enough to remember stumbling around Brøderbund’s “Myst,” a 1990s graphic adventure puzzle video game designed by the Miller brothers, then you have a sense of what you’re in for if you commit yourself to watching “Tales from the Loop.” It is at times unnecessarily bewildering and annoyingly aimless. Sure, it’s picturesque and pleasant on the surface, but something ominous dwells somewhere in the gray skies and hazy horizons.

“Loop,” the first episode, involves a schoolgirl, Loretta, whose mother, Alma, vanishes. Alma, the viewer learns, was employed by the Loop. She appropriated an object from her workplace in order to conduct an experiment at home. It’s evident that her clandestine research led to her disappearance. Although Loretta never discovers precisely what happened to her mother, she does get a glimpse at her own future.

In “Transpose,” the second episode, two teenage boys discover some discarded tech in the woods. An identity swap, ala “Freaky Friday,” ensues. Things don’t work out very well for Danny and Jakob.

Moving on to “Stasis,” the third episode, May — played by Nicole Law — finds an apparatus that looks like a cross between a Thermos beverage container and a vintage flashlight. Skilled at deconstructing and repairing gadgets, May figures out how to fix it and obtains the appropriate power source to make it function. What does it do? Well, let’s just say flipping the switch would place the user squarely in Rod Serling’s favorite time zone.

By now, you should see a pattern: Each episode features some kind of weird, sci-fi equipment that has either been pinched by someone seeking Forbidden Wisdom or was inadvertently found by some unsuspecting, soon-to-be victim. The tech isn’t even particularly innovative in terms of storytelling: We’ve seen these kinds of devices in other tales. It’s the series’ frame story that provides a touch of originality.

Sadly, that part of the narrative is kept buried deep in the background in the early episodes — so much so that it almost feels like an afterthought. Each character is somehow connected to the Loop, but the connection rarely gives the viewer any significant insight into what’s really happening beneath the town. It’s as if the show is placing puzzle pieces on a tabletop one at a time — but the puzzle pieces all come from different boxes.

Each episode of “Tales from the Loop” moves at an excruciatingly slow pace. The sleep-inducing soundtrack is no help in that regard. Though it is visually captivating, the show’s emphasis on the contrast between rustic panoramas and the futuristic mechanical waste does nothing propel the plot. It’s satisfying and intriguing as adornment, but it serves no clear purpose.

Likewise, most of the characters in the series are either unapproachable or unsympathetic. The town is populated by a mix of introverts, pariahs and workaholics. Affection between characters — husbands and wives, boyfriends and girlfriends, parents and children — never seems genuine. From the first episode, emotions seem artificial and muted. Even if that is intentional, it makes it difficult for the viewer to feel any kind of empathy for the people whose lives are being showcased.

“Tales from the Loop” is dreamscape influenced by everything from David Lynch to “The Twilight Zone.” Individual episodes are monotonous and adrift, lacking the allure to keep most viewers invested in the show’s slow-to-develop premise. However, for those who are mesmerized by impenetrable oddities and enjoy watching detached characters stumble blindly through a seemingly endless labyrinth, this series — taken in its entirety — may be just the ticket to occupy some time.