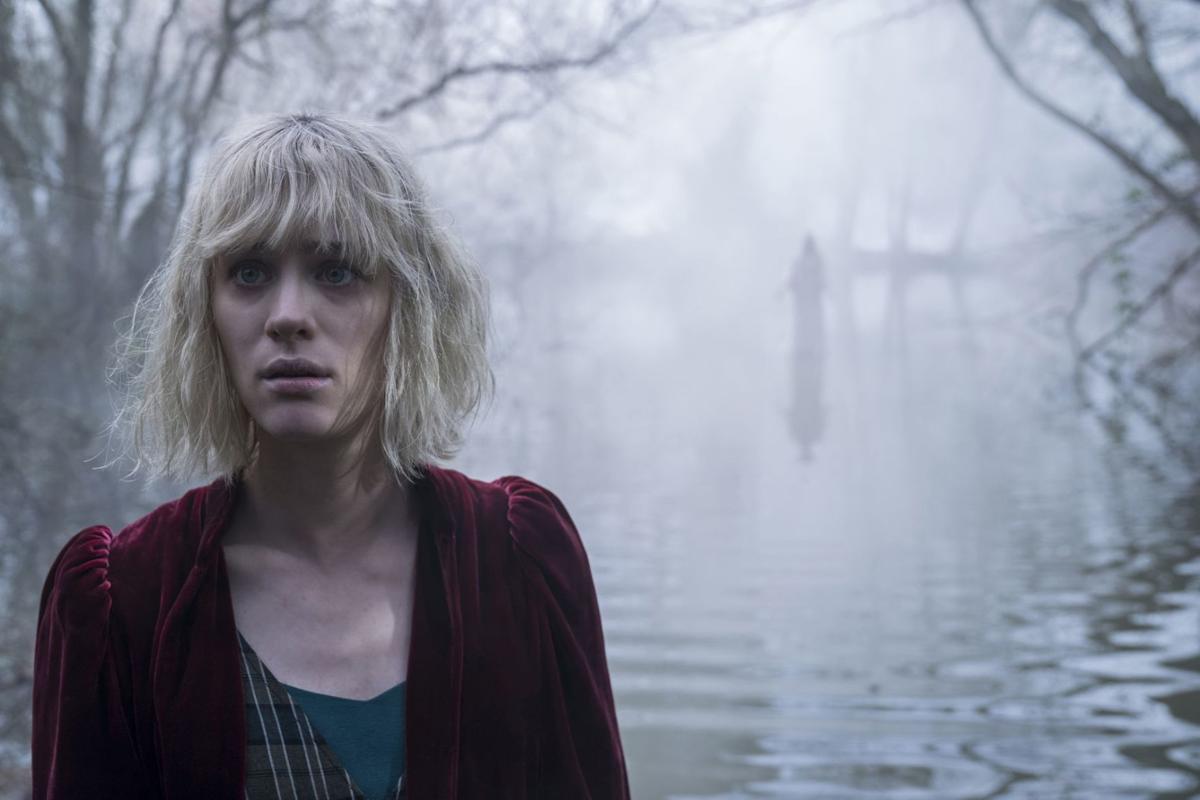 Mackenzie Davis stars as Kate Mandell in "The Turning."

Let me tell you something: It was downright spooky — opening weekend, a late Sunday morning screening and this movie reviewer sitting all alone in a darkened auditorium slogging through the tedious pre-show commercials. What dark forces had conspired to keep audiences from wanting to see a new, modern adaptation of the 1898 ghost story “The Turn of the Screw” by Henry James?

Was the vacant theater actually populated by ghosts? Wait — was I the ghost?

Thankfully, before the “The Turning” finally started, a few more “foolish mortals” arrived and took their seats, allowing me to suppress my concern. It turns out, nothing in the film inspired much terror, either.

Note: Although I won’t intentionally reveal any specific plot points, it’s impossible to critique “The Turning” without discussing elements some may consider spoilers. You have been warned.

There’s probably a good chance you are familiar with the work of James. His novels “The American,” “Daisy Miller” and “Washington Square” have been perennial favorites of high school American literature teachers. The novella upon which this film is based is considered a touchstone in the field of ghost stories while drawing heavily on gothic conventions. “The Turn of the Screw” is a challenging but rewarding story that showcases the author’s ability to force readers to cope with parallel, mutually exclusive interpretive possibilities. James seems to employ strategic ambiguity to create an effect of uncertainty in the reader.

In her adaptation of the tale, director Floria Sigismondi attempts to simulate that haze of dubiousness in a modern setting. The result is elegant but cluttered. More frustrating than frightening, “The Turning” is filled with cheap jump-scares that are too obvious to be effective. The backdrop is dripping with worn-out gothic tropes: the dark and gloomy mansion, with shadowy corridors and rooms strewn with dusty antiques; the forested grounds of the estate, complete with ponds no doubt as black and lurid as the tarn outside the house of Roderick Usher. These elements can still be made to work if used sparingly, but Sigismondi relies too heavily upon shadow and melancholy.

In “The Turning,” Kate Mandell (Mackenzie Davis) leaves her job as a teacher to become a governess at a sprawling estate in the Maine countryside. She finds herself watching over two orphans — Flora (Brooklynn Prince) and Miles (Finn Wolfhard) — whose parents died in a car accident just outside the house gate. Mrs. Grose (Barbara Marten), a caretaker, also lives on the estate.

Shortly after her arrival, Kate starts to experience increasingly unnerving incidents which make her believe that both the children and the house may hold dark secrets of a violent past.

“The Turning” is being presented to prospective audiences as a haunted-house mystery. Within the first 20 minutes of the film, though, there is enough foreshadowing to plant the seed that things may not be as they seem. The brief exchange between Kate and her mother, portrayed by Joely Richardson, sets up the idea of an unreliable narrator.

The problem is that Sigismondi never truly identifies Kate as the narrator. In fact, there are several points in the film when Kate seems oblivious to the paranormal activity happening around her. That clearly derails the idea of ambiguity.

Another problem that arises in “The Turning” is one that is common in the genre: These characters apparently exist in a world in which there are no ghost stories and no movies about haunted houses. That clearly must be the case, because Sigismondi has literally used a cut-and-paste technique, plucking clever gimmicks and shots from classics of the genre and recycling them here. Creepy mannequin? Check. Rattling doorknob? Check. Shaking bedframe? Check. Creepy old mirrors? Check. Let me be clear, though: This is by no means cinematic plagiarism. It’s somewhere between affectionate homage and creative appropriation.

Perhaps the biggest failing of the film is that the audience has no incentive to empathize with any of the characters. Kate never emerges as a either a credible guardian of the young girl or as a tragic hero confronting an invisible enemy. Flora seems far too mischievous, like a naughty imp parading as a little girl. Miles is a spoiled brat on the road to becoming a rowdy frat boy.

The version of “The Turning” that ended up on the big screen may be flawed, but Sigismondi is still owed some respect. She endeavored to emulate the same sense of uncertainty and suspense that James used to manipulate his readers. Establishing and maintaining the fine line between competing interpretations is difficult in film, even for an accomplished filmmaker such as Sigismondi who directed the 2010 biopic “The Runaways.”

Though it is a disappointment, “The Turning” may at least serve as a vehicle to encourage audience members unfamiliar with the source material to seek out the novella. “The Turn of the Screw” also has prompted a number of film adaptations that may also be of interest, with the critically acclaimed 1961 movie “The Innocents,” starring Deborah Kerr, considered the best of the bunch. Other adaptations include “Presence of Mind” in 1999, “In a Dark Place” in 2006 and a 1974 made-for-television version adapted by William F. Nolan and directed by Dan Curtis.