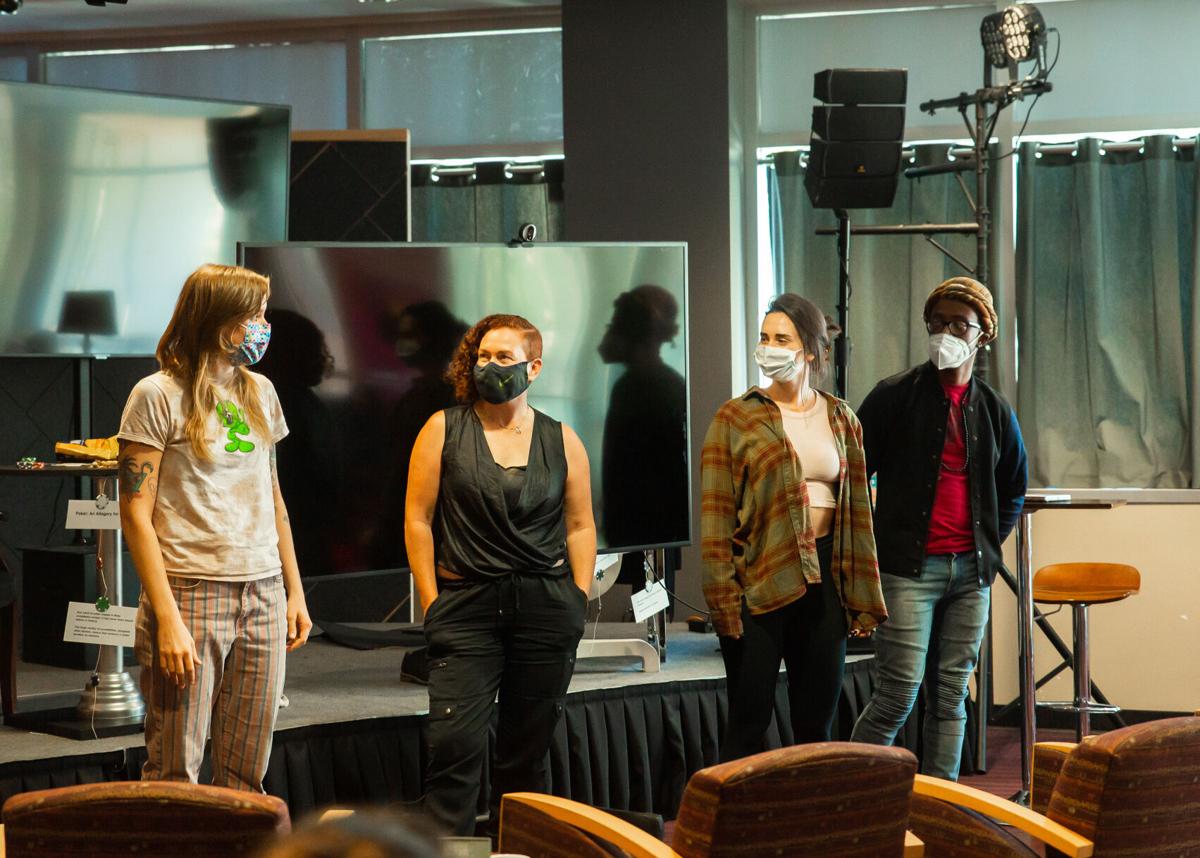 The cast of American Stage’s production of “Jacob Marley's Christmas Carol” meets during an early rehearsal in November. The show runs Dec. 8 through Jan. 2.

ST. PETERSBURG — What the dickens has American Stage done to the world’s most beloved Christmas tale?

Performances will be Wednesdays and Thursdays, 7 p.m.; and Fridays and Saturdays, 8 p.m. Matinees will be Saturdays and Sundays, 2 p.m. Ticket prices start at $47 and vary by performance time. Call the box office at 727-823-7529 or visit americanstage.org.

“Jacob Marley’s Christmas Carol” is based on a book by Tom Mula focusing on Jacob Marley and his attempts to redeem Scrooge lest he face eternal torment.

“‘Jacob Marley’s Christmas Carol’ is a powerful story about redemption, rebirth, and reconciliation,” said Maharaj. “As we celebrate the holidays, this play is a gentle reminder of the gift of kindness, joy, and love."

Charles Dickens wrote a short story that has become one of the most adapted pieces of literature in history. The story of Scrooge is well known, but what about Marley? How did his haunting afterlife begin? In his version of the carol, Marley is escorted by a spritely creature along the pathway to redeeming his soul — by helping to save the one man on earth who was more greedy and sour than himself. The audience comes to find that self-sacrifice can make a difference in the end.

“Jacob Marley’s Christmas Carol” was first released as a novel in 1995, and quickly became a Chicago Tribune bestseller as families fell in love with the backstage version of Dickens’ Scrooge story told by Marley’s ghost. The award-winning audio version has been broadcast nationwide on NPR for seven seasons.

The American Stage cast features four actors, several gracing the American Stage theater for their first time. Newcomers Saren Nofs Snyder, Amanda Jane Snyder and Amber McNew are excited to make their American Stage debut. They are joined by Patrick A. Jackson, associate artistic producer, who audiences might recognize from the 2018 production of “A Raisin in the Sun.”

Nofs Snyder is a Chicago and Portland based actor who is overwhelmed to debut at American Stage after 748 days away from the theater. Most recently, she was seen as Regina in “The Little Foxes” at Citadel Theatre in Chicago. She originated the role of Barbara in Lanford Wilson’s “Sympathetic Magic.” She has a master’s degree in acting from the University of Missouri, Kansas City.

Snyder is thrilled to be returning to the stage after nearly two years of Zoom productions. She is no stranger to Maharaj’s work and was last seen under his direction as Hannah in “Charlottesville.” Aside from acting, Snyder has a master’s degree in exercise science and nutrition and is currently a strength and conditioning coach for actors, singers, and dancers.

Jackson is an actor, teaching artist and creative with a passion for cultivating community through the art of storytelling. He is an alumnus of Morehouse College in Atlanta, Georgia. He is thankful to return to in person storytelling.

McNew is thrilled to be joining this cast and creative team for her American Stage debut. She recently received her master’s degree in acting at the FSU/ Asolo Repertory for Actor Training. She was last seen on Maine’s Theater at Monmouth stage in George Brant’s one-woman show “Grounded.” McNew passionately believes in using theatre as a vehicle for healing, teaching, and perspective; for giving voice to the communities that have been silenced and overseen.

Maharaj is an Indo-Afro-Caribbean, multi award-winning, multi-disciplinary, American theater artist, educator, administrator, and activist. He is the assistant director for “Fire Shut Up In My Bones” at the Metropolitan Opera. Maharaj has twice been a New York Times Critics Pick. He is a recipient of the N.A.M.T Award. He is a finalist in DUAF: NYC, the inaugural playwright for the Theatre Raleigh New Works Reading Series, and a semi-finalist in the Blue Ink Playwriting Award competition.