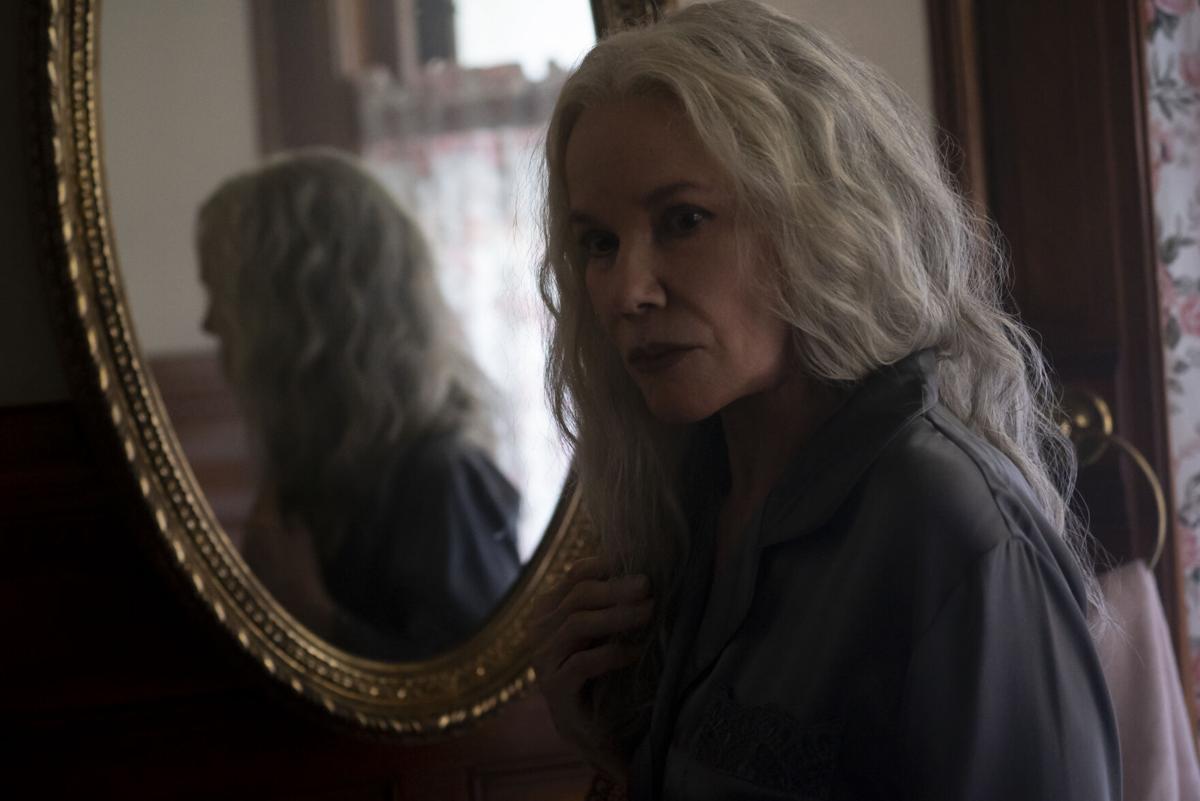 Barbara Hershey stars in “The Manor.”

Before I was 10, I watched two relatives gradually go downhill and slip into the fog of dementia. Incidents connected to their deterioration are among my most vivid recollections of childhood. The process behind their subjective cognitive decline baffled me at the time. Now, those memories serve as a source of impending dread.

The thought of losing oneself is terrifying. Misplacing a set of keys or occasionally forgetting the name of an actor or musician seems innocuous to most of us. But, as we age, those minor blips in our daily routines become potential harbingers of serious impairment. Sporadic absent-mindedness may portend a pathway leading to an inability to recognize once-familiar settings, trouble performing routine tasks such as preparing a meal or tending to personal care and hygiene, and increasing difficulty communicating. The dénouement of this tragic descent makes those closest to us faceless strangers, and severs every connection with the world we once knew.

If we are the sum of our education, memory, and experiences, when we lose the ability to access those unique components we cease to be ourselves. We become something else … something almost alien.

The horror genre is beginning to explore the devastation wrought by dementia. In recent years, two films in particular — “The Taking of Deborah Logan” in 2014 and “Relic” in 2020 — draw on the existential threat of dementia as an opening before fusing supernatural elements into the storyline.

Joining those films is “The Manor,” one of four films in the “Welcome to the Blumhouse” series showcasing diverse casts led by emerging filmmakers. It debuted on Amazon Oct. 8.

Written and directed by Axelle Carolyn, “The Manor” revolves around Judith Albright (Barbara Hershey), a 70-year-old woman whose daughter (Katie A. Keane) convinces her to move into a nursing home after she suffers a mild stroke. Though her surroundings seem comfortable at first, Judith quickly suspects something is amiss at Golden Sun Manor. Witnessing a series of strange occurrences and nightmarish visions, she becomes convinced that some malevolent force is preying upon residents of the assisted living facility. Her allegations, however, are dismissed by the facility’s staff who attribute her wild stories to dementia.

Judith initially bonds with a group of fellow seniors, including Roland (Bruce Davison), Trish (Jill Larson), and Ruth (Fran Bennett). They encourage her to remain silent about her suspicions, warning her not to give the staff any reason to sedate her. The death of Annette (Nancy Linehan Charles) intensifies Judith’s fear and compels her to poke around the manor for evidence.

The director succeeds in keeping the viewer guessing as to whether or not Judith’s experiences at the manor are real or imagined. The fact that her devoted grandson Josh (Nicholas Alexander) questions her ability to distinguish between reality and fantasy gives the audience ample reason consider her perspective unreliable. Simultaneously, the pervading eerie atmosphere of Golden Sun Manor is suggestive of mystery and malignancy. Shadows, creaking wooden floors, grotesque monsters, and madness are all key elements Carolyn borrows from gothic horror to emphasize Judith’s isolation and confinement.

Somewhat unexpectedly, “The Manor” veers into folk horror territory in the final act, with a surprising turn of events that transforms Judith.

"The Manor" offers viewers something of a rarity: How many horror films can you name that feature a 70-year-old female in the leading role? Laurie Strode from the "Halloween" franchise is only 60, though it's a good bet that Jamie Lee Curtis will continue to play the character as long as they keep finding new excuses to reanimate Michael Myers. Hershey is absolutely up to the task. The actress — who earned an Emmy and a Golden Globe for Outstanding Lead Actress in a Miniseries/TV Film for her role in the 1980 television movie “A Killing in a Small Town” as well as Academy Award nomination for Best Supporting Actress in 1997’s “The Portrait of a Lady” — is no stranger to the horror genre. Her role in the 2011 psychological horror “Black Swan” saw her walk away with the Fangoria Chainsaw Award for Best Supporting Actress. She also appeared in two films in the “Insidious” franchise. Her most unforgettable contribution to the field of horror cinema, however, is her portrayal of Carla Moran in 1982’s “The Entity.” In that film, after her character is sexually assaulted by an invisible entity, psychiatrists insist her claims of paranormal victimization are delusions stemming from psychological trauma.

Hershey's outstanding performance in “The Manor” makes up for a somewhat disorganized plot and pedestrian pacing. The casting throughout is inspired, with Davison, Larson and Bennett turning in compelling portrayals. Alexander's interpretation of a loving and protective grandson forced to distance himself from the woman who was always there for him reflects the daily dilemmas caregivers face. Despite the chorus of voices telling him to remove himself from the equation, he ultimately embraces his role as Judith’s sole advocate.

The relationship between grandmother and grandson is a driving force in “The Manor,” highlighting collective fears about aging and the way society treats elderly people.

“My dad had dementia the last two years of his life, and it started when he was fairly young,” the director said in the film’s production notes. “I saw him go from being a highly respected university professor to being someone in a nursing home who looked as old as the oldest people there.”

Her memory of nursing home residents who would sometimes talk about seeing things that weren’t actually there served as part of the inspiration for the film.

“One time, my dad woke my mom in the middle of the night and asked, ‘Can you see all those people around us?’ It was such a creepy moment,” she continued, “and I remember thinking, what if you were in a state of mind where you could see something terrifying, but the more you talked about it, the more people assumed you were crazy? I found that idea very scary.”

Like “The Entity,” “The Manor” emphasizes the tension between the scientific and the supernatural. Its consideration of pressing social issues does not undermine its inherent fear factor. Judith’s creeping paranoia is infectious, yet even when she is most imperiled, she never comes across as vulnerable or helpless. She is lucid, determined and single-minded — and she is wise enough to sporadically assess her state of mind. Whatever real or imagined horrors lurk in the shadows of Golden Sun Manor, Judith must first cope with the nightmare of diminished independence and abandonment by reestablishing her confidence and becoming self-reliant.