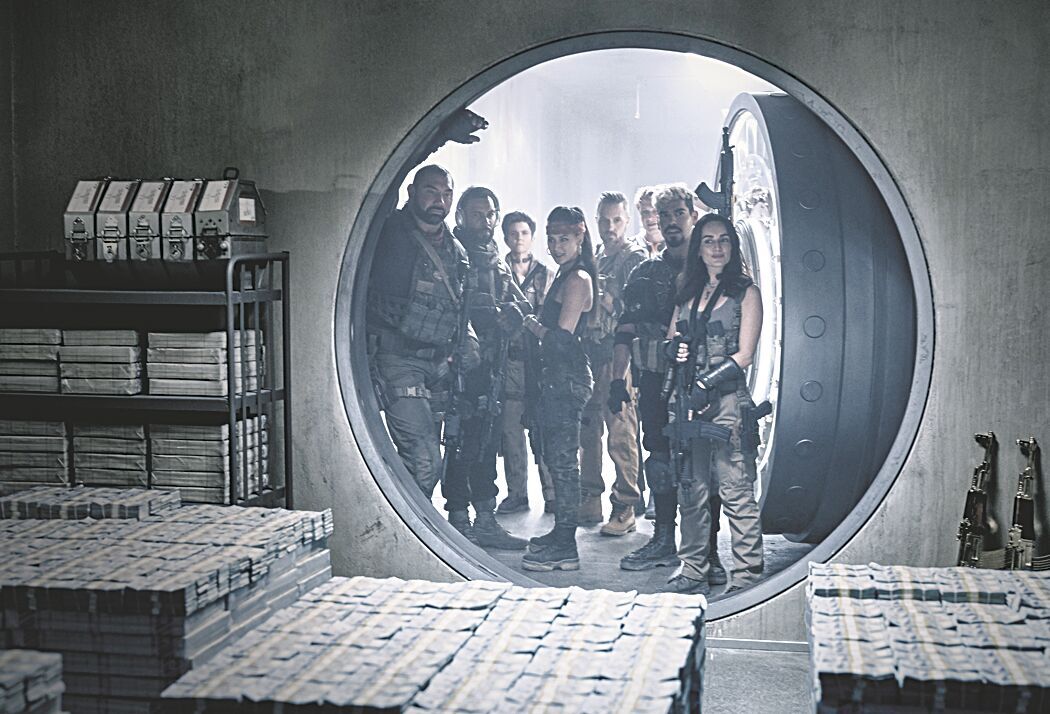 Starring in “Army of the Dead” are, from left, Dave Bautista as Scott Ward, Omari Hardwick as Vanderohe, Tig Notaro as Peters, Samantha Win as Chambers, Colin Jones as Damon, Matthias Schweighöfer as Dieter, Raùl Castillo as Mickey Guzman, and Ana de la Reguera as Cruz.

On any given Saturday afternoon in the 1970s, I might be found engaging in a world-building exercise with other neighborhood kids that often involved combining action figures from various franchises in one weird, shared universe. It isn’t difficult to imagine how this phenomenon developed: No one in my circle of friends had parents who were willing to shell out enough cash to cover purchasing a full toy line. Instead, we ended up with a ragtag assortment of popular characters produced by toy manufacturers such as Mego, Marx, Gabriel, Mattel and Kenner.

After the Saturday morning cartoon lineup had come to an end, we would convene at a predetermined spot, bringing our prized possessions to the meetup. That meant Captain Kirk and Spock might find themselves heading up a landing party that included Superman, Spider-Man, Tarzan, Pulsar, Stretch Armstrong, and the Fonz. On their adventure, they might encounter Cornelius and Dr. Zaius from “Planet of the Apes;” Buffalo Bill and Wyatt Earp from the Heroes of the American West line; or Dracula, Frankenstein, the Mummy and the Wolfman from the Mad Monsters series. Let’s not forget that TV crime dramas generated action figures, too. Starsky and Hutch, John and Ponch, and even a few of Charlie’s Angels might make a cameo.

My point is this: Zack Snyder isn’t the first person to conceive of a screwball mashup pairing monsters with action heroes. Kids have been doing it for decades.

“Army of the Dead” actually feels like its roots might stretch back to some adolescent playdate. The zombie heist film, directed by Snyder, was released May 14 in select theaters. It began streaming digitally May 21 on Netflix.

In the film’s opening sequence, a military convoy travels across the Nevada desert transporting top secret cargo — a shipment so hush-hush none of those assigned to keep it safe know what it is. As two of them speculate about the nature of the freight, fate intervenes by maneuvering two distracted newlyweds into the path of the lead vehicle in the motorcade. That truck manages to swerve out of the way, sending the out-of-control honeymooners crashing into the juggernaut carrying the cargo in a reinforced shipping container. After notifying the base of the situation, the soldiers who survived the accident are basically to told run away — an order the clearly don’t take seriously enough.

The only thing missing from the subsequent scene is the “Pop Goes the Weasel” melody used in Jack-in-the-box toys: The container opens and out pops a zombie.

The story picks up some time later, with Scott Ward (Dave Bautista) — a former mercenary, a Medal of Honor recipient and zombie war hero — flipping burgers at a greasy spoon and radiating curmudgeon vibes 24/7. He has every right to be terminally grumpy, considering everything he lost in Las Vegas. Along comes super-wealthy casino boss Bly Tanka (Hiroyuki Sanada) with an offer Scott can’t refuse: He needs someone to infiltrate the quarantine zone to retrieve $200 million from an underground vault safeguarded with boobytraps. So: Evade the military, bypass fortifications, navigate a postapocalyptic cityscape populated by zombies, sidestep boobytraps and crack a high-tech safe — sounds easy enough.

Oh, wait: They have to do it before the government drops a tactical nuclear weapon on the city to eradicate the zombies, which is scheduled to happen really, really soon.

Along the way, the team also picks up Coyote (Nora Arnezeder), a proficient fighter and survivalist living in the refugee camp, as well as Scott’s estranged daughter Kate (Ella Purnell), who demands to accompany them in the hopes of finding Geeta (Huma Qureshi), a mother who is missing in town.

“Army of the Dead” plays out exactly as you would expect. It’s superficially entertaining in an undemanding, inconsequential way. The script doesn’t provide enough depth of character to encourage viewers to root for the protagonists. The relationship between Scott and his daughter seems designed to stimulate sympathy, but Purnell misses each opportunity to express any sign of understanding or pity. Bautista’s performance is more balanced, rendering Scott as a deeply conflicted man trying to atone for his failings.

The film is loaded with silly plot devices and irrational departures from character. Intelligent team members make asinine decisions. An excess of coincidences reveals the script’s weakest segments. More than a few times, Snyder expects the viewer to ignore the laws of physics. More than a few times, he introduces concepts to the storyline that are abruptly forgotten. The ending fails to give decisive closure for some elements in favor of laying groundwork for potential sequels.

I didn’t say it wasn’t somewhat gratifying, though. It’s mindless fun that puts violent gore over lurking dread. It relies heavily on adrenaline-soaked escapist action, top-notch special effects and video-game pacing. The visuals are unfailingly stunning, from Valentine, the prowling undead tiger, to the horde of sprightly zombies that look like they must have formerly worked as Broadway dancers. Seriously: Was Zeus (Richard Cetrone), the “alpha zombie,” in charge of choreography during the climactic battle? At any moment I expected a chorus line of shamblers to launch into a grunt-and-dance number.

“Army of the Dead” is puerile and inane, but its giddy energy and punch-drunk violence make it irresistible today, even if tomorrow you may begin to forget what made it so engrossing.