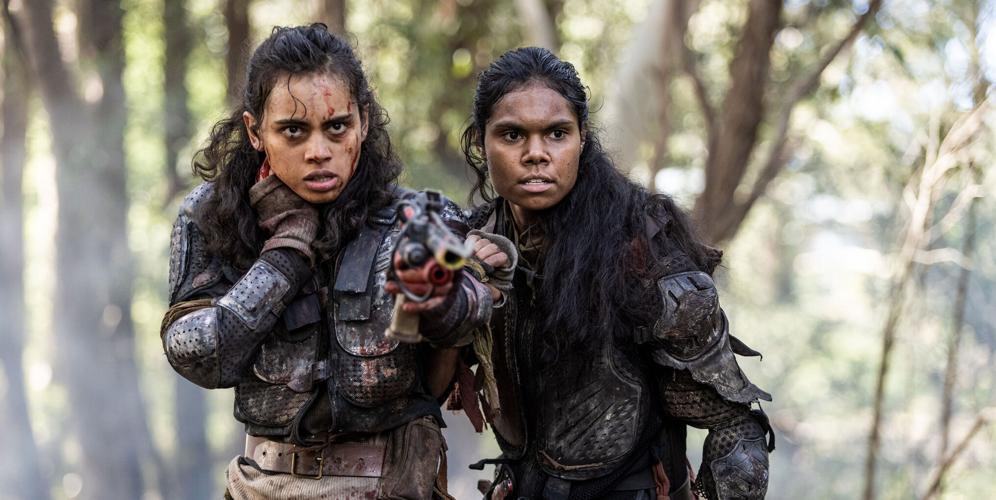 Tasia Zalar stars as Grace and Shantae Barnes-Cowan as Maxi in “Wyrmwood: Apocalypse.”

Every time it feels like the zombie craze is starting to die down, another gruesome splatterfest comes along to dish up a heaping helping of grisly mayhem. Nearly 55 years after George A. Romero first depicted zombies as reanimated cannibalistic corpses in “Night of the Living Dead,” those shambling worm-sacks saturate pop culture. Even the Disney conglomerate has tapped into the cultural trend, starting with the 2018 Disney Channel original movie “Z-O-M-B-I-E-S” that launched a musical franchise. “Z-O-M-B-I-E-S 3” is due out later this year. How long will it be before we have zombie versions of Mickey, Minnie, Donald and Daisy?

Part of our fascination with zombies is that they can serve as a metaphor for practically any modern source of anxiety and fear. Filmmakers can frame the zombie narrative as social and political commentary, tackling subjects such as racism, classism, consumerism, mass contagion and mindless conformity. Depending upon which film you happen to be watching, zombies may be symbolic of the dangers of scientific progress unchecked by social responsibility; the mistreatment of disadvantaged and oppressed segments of society; or how people react to rapid societal collapse.

Not every zombie film is that nuanced, of course, and not every fan of zombie cinema searches for a deeper meaning.

In 2014, a low-budget film called "Wyrmwood: Road of the Dead" clawed its way out of obscurity to claim a spot on the crowded playing field. It was the creation of Australia's Roache-Turner brothers: Kiah (writer and director) and Tristan (writer, producer and production designer). Released in the interim between 2013’s “World War Z” and 2016’s “The Girl with All the Gifts,” the film appealed to audiences with its over-the-top bedlam and relentless energy. "Wyrmwood: Road of the Dead" mixes its horror with the post-apocalyptic design ingredients plucked from another Australian independent powerhouse: "Mad Max."

After a long wait, “Wyrmwood: Apocalypse” — a direct sequel to the prior film — was released April 14 in select theaters and on streaming platforms such as Amazon Prime Video and Vudu. The Roache-Turner brothers return behind the scenes

The story picks up with Rhys (Luke McKenzie), who lives in a heavily fortified compound in the zombie-infested wasteland. His job is to capture civilians and deliver them to what's left of the military — who are even more revolting than the zombies. Of particular interest to the Surgeon (Nicholas Boshier) who works at the underground bunker are zombie-human hybrids that might provide insight into ending the apocalypse.

Rhys manages to capture a half-zombie-half-human named Grace (Tasia Zalar), though he soon regrets turning her over to the rancorous Surgeon. Fortunately, he gets a chance to redeem himself when he partners with Maxi (Shantae Barnes-Cowan), Barry (Jay Gallagher) and his zombie-human hybrid sister Brooke (Bianca Bradey).

Don’t expect much in the way of exposition in “Wyrmwood: Apocalypse.” Like the first film, the action is unyielding and dizzying. The film moves at a breakneck pace, establishing tension and anxiety. The zombies sometimes fade into the background, as inconsequential to the plot as random furniture. To these survivors, they remain an existential threat — but it’s a threat that they have learned to manage rationally, and often with absurd humor. It’s almost like living through two years of a pandemic, not that anyone knows what that would be like.

Since the zombies are relatively manageable, the conflict in “Wyrmwood: Apocalypse” must come from another source. The Surgeon and his paramilitary henchmen fill that role with maniacal malevolence. Although the claim to be working on a cure, they have their own ghastly agenda. Each glimpse into their subterranean chamber of horrors is a gonzo nightmare. Blink and you may miss Boshier’s homage to “Evil Dead 2,” although no one can outdo Bruce Campbell when it comes to battling a possessed hand. Speaking of visual cues, did anyone else notice that the Surgeon may have borrowed a page from Herbert West’s cookbook when concocting his serum?

“Wyrmwood: Apocalypse” isn’t quite as satisfying as its predecessor, but it comes remarkably close. It revels in its decadence and debauchery, basking in relentless gore and chaos. It crackles with anarchic rapture, with blood and bullets punctuating a critique of militaristic machismo. Those searching for a deeper meaning may also connect the dots between the production of anti-viral pills rationed out to Rhys and certain processed food rations in the 1973 ecological dystopian thriller film “Soylent Green.” Don’t get bogged down in ethical issues, though: Just enjoy the ride.

As barbaric as it is cartoonish, “Wyrmwood: Apocalypse” is the kind of midnight movie fodder that hardcore horror fans eagerly devour. This blood-soaked caricature of a post-civilization future is part rescue-and-revenge actioner and part inspired derangement. The ending leaves room for another visit to post-apocalyptic Australia. Let’s hope the Roache-Turner brothers make “Wyrmwood” a trilogy.