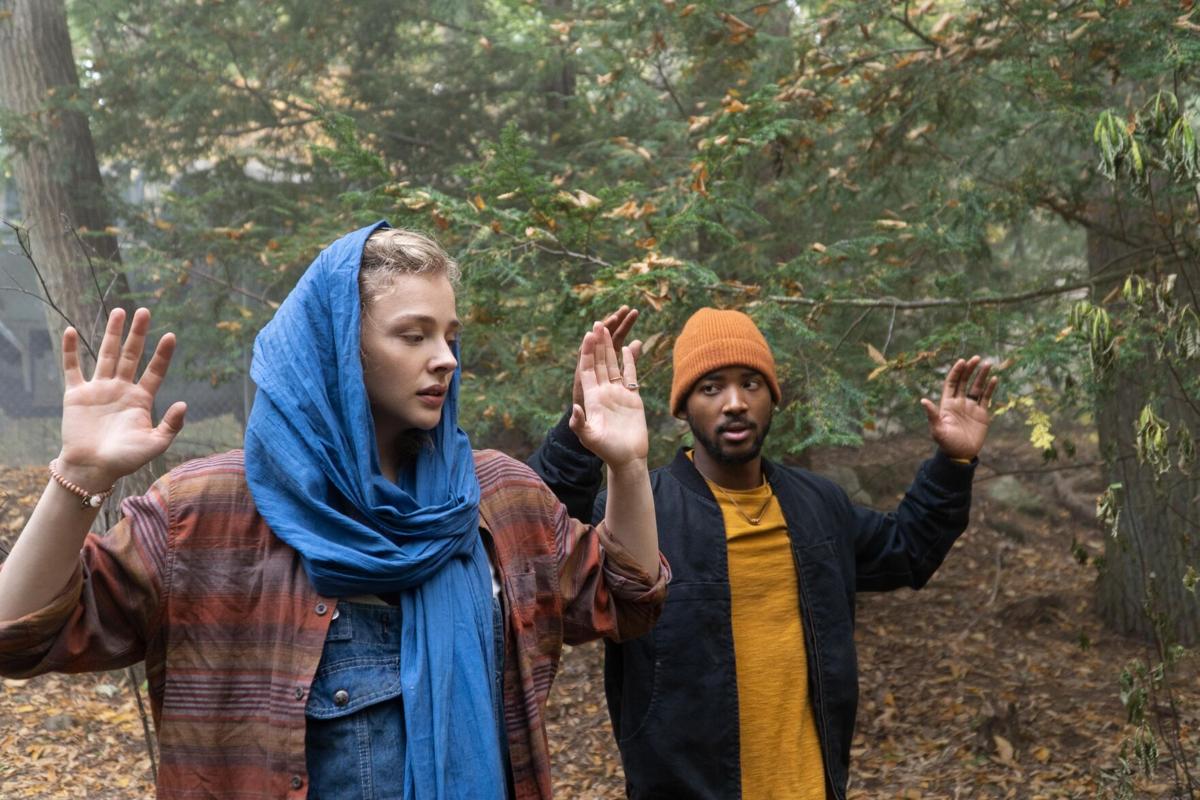 Chloë Grace Moretz stars as Georgia and Algee Smith as Sam in “Mother/Android.”

The day passed without incident, as days generally do in the broadest historical sense.

In the real world, the hottest trends in technology in 1997 included the debut of Netscape Communicator, Tamagotchi virtual pets, MP3s, WebTV, and DVD players. Of course, some might consider Deep Blue’s victory over chess champion Garry Kasparov in 1997 a mildly creepy coincidence — but it’s a stretch. And in September 1997, Honda introduced P3, the newest in its prototype humanoid robots. P3 was the first completely independent bi-pedal humanoid walking robot. Hardly threatening, the only way a P3 could do damage is if it fell on someone from a great height.

As we approach 2022, it appears civilization is unlikely to be threatened by AI agents in the immediate future. Meanwhile, other disasters are far more pressing, with calamities of various magnitudes unfolding across the globe in real time, with a constant barrage of footage shot on mobile phones by citizen journalists. Though the images reach an audience, the existential threat remains distant. Perhaps unsurprisingly, the disconnect leaves a significant segment of the population disengaged and disinterested. They ignore genuine tragedies. They can’t be bothered with valid, verifiable threats to public health and safety. Ironically, it’s the same combination of negligence and selfishness that will probably lead to the development and proliferation of domestic servant robots as well as weaponized, conscious superintelligence.

In “Mother/Android,” director Mattson Tomlin offers a gloomy morality play built around the premise of an android uprising. Its focus on drama instead of action is a refreshing change in a subgenre that has traditionally duplicated themes from the Terminator franchise. “Mother/Android” was released Dec. 17 by Hulu.

The film takes place in a not-too-distant future in which androids — which are indistinguishable from humans — have been mass produced as the newest and smartest home convenience. They are marketed as domestic servants, presumably handling all those annoying household chores that would otherwise be the burden of — well, probably some flesh-and-blood domestic workers. It’s kind of evident that these robots are manufactured for only the wealthiest families. In this film’s milieu, no big box bargain stores are selling budget models as doorbuster deals on Black Friday.

The film opens in a clean, cozy bathroom in a big, expensive house, in a gated, deed-restricted community. Some of those details may only be implied, but it’s fairly evident that Georgia (Chloë Grace Moretz) comes from a prosperous family.

When the audience meets Georgia, she is on the toilet waiting for the results of her third pregnancy test to confirm the positive results of the first two efforts. Her boyfriend Sam (Algee Smith) is sitting on the floor, doing his best to comfort her. His efforts only seem to aggravate Georgia, who from the start gives the distinct impression that she is not happy about the pregnancy — and that maybe her relationship with Sam is tenuous, at best.

Before they can discuss the matter further, Georgia’s parents arrive and the couple leaves for a Christmas party at a friend’s house. While there, a piercing noise interrupts the festivities, signaling the start of an AI uprising. Immediately, the home’s domestic android begins killing guests.

Georgia and Sam manage to escape, and go into hiding.

The story resumes many months later, with Georgia and Sam making their way through unpopulated tracts of New England in an attempt to reach Boston. They have heard that they can board a ship to Asia as refugees, with the promise of starting a new life in an area not under siege by rebellious androids. In order to reach the city, however, they must face No Man’s Land, a stronghold of the android uprising. Their objective is to reach Boston before Georgia has the baby, but their time is quickly running out.

“Mother/Android” asks viewers to fill in a lot of blanks and to make a lot of assumptions. The characters are granted virtually no meaningful background sketches. There is no reliable information on Georgia beyond the fact that her parents are rich and she is probably spoiled. Sam is even more of a mystery. He displays a level of maturity that makes his girlfriend look like a selfish brat, which makes one wonder why the relationship has survived as long as it has. When the two seek temporary refuge at a military outpost, he reluctantly agrees to fight a soldier twice his size — and apparently inflicts so much damage that the base commander banishes both him and the very pregnant Georgia.

Interestingly, Tomlin cuts away from this bloody brawl before the first punch is thrown. Instead of shining the spotlight on the violence, he emphasizes its repercussions. That is an approach he repeats throughout the film.

A little more context would go a long way in making these two characters believable and interesting. It takes a long time to find a reason to empathize with Georgia, even though her situation should evoke immediate compassion. Knowing where these refugees picked up all their survival skills would certainly make their story less improbable.

For instance: Where exactly did Georgia learn to take down drones with a handgun while riding on the back of a motorcycle? It’s not a skill I have ever attempted to master, but I suspect it might take more than a few days of practice.

There are also problems with the premise that involve the scope of the android uprising, their use of torture, and the apparent inability of the world’s combined military forces to contain a limited number of combatants. Tomlin once again expects the viewer to rationalize the story’s omissions and oversights.

Despite its flaws, “Mother/Android” has some startlingly poignant scenes. Its denouement revolves around a heartbreaking soliloquy that speaks to the world in which we find ourselves in a relentless, ongoing pandemic that has temporarily reshaped civilization. Tomlin uses his film to showcase parallels between a fictitious faltering America beset by defiant androids and the very real vulnerabilities exposed by COVID-19 and other looming social issues both in the United States and globally. If nothing else, “Mother/Android” reminds us of the things we have already lost.

Lee Clark Zumpe is entertainment editor at Tampa Bay Newspapers and an author of short fiction appearing in select anthologies and magazines. Follow Lee at www.patreon.com/Haunter_of_the_Bijou.