Buzz Lightyear (voice of Chris Evans) embarks on an intergalactic adventure in “Lightyear.” 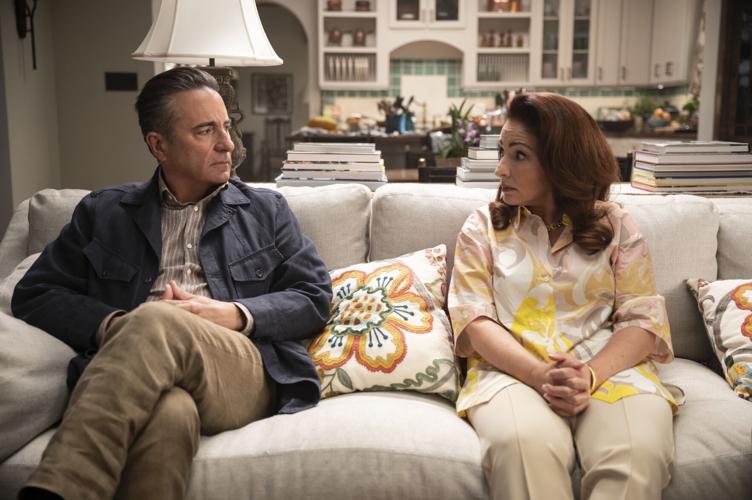 Andy Garcia stars as Billy and Gloria Estefan as Ingrid in “Father of the Bride.”

Chris Hemsworth stars as Abnesti and Miles Teller as Jeff in “Spiderhead.”

Buzz Lightyear (voice of Chris Evans) embarks on an intergalactic adventure in “Lightyear.”

Andy Garcia stars as Billy and Gloria Estefan as Ingrid in “Father of the Bride.”

Chris Hemsworth stars as Abnesti and Miles Teller as Jeff in “Spiderhead.”

A number of new movies will be released this week, including the following films opening in theaters or debuting via video on demand on various streaming platforms:

A sci-fi action adventure and the definitive origin story of Buzz Lightyear, the hero who inspired the

million light-years from Earth alongside his commander and their crew.

As Buzz tries to find a way back home through space and time, he’s joined by a group of ambitious recruits and his charming robot companion cat, Sox. Complicating matters and threatening the mission is the arrival of Zurg, an imposing presence with an army of ruthless robots and a mysterious agenda.

The film is scheduled to be theatrically released on June 17 by Pixar and Walt Disney Studios.

‘Father of the Bride’

Long-marrieds Billy (Andy Garcia) and Ingrid (Gloria Estefan) are surprised when their eldest daughter Sofia (Adria Arjona) comes home to Miami for a visit. But the surprises just keep coming when she announces a new boyfriend, Adan (Diego Boneta) — who is now her fiancé — and their plans for a quick-turnaround wedding and a new life together in Mexico, where Adan’s family is from.

Sofia’s quickfire revelations keep Billy and Ingrid from making their own disclosure — that they’re calling quits on their marriage — but both agree to delay the news and play the loving couple for the benefit of the family. Old-fashioned Billy is at first opposed to the wedding, but he is eventually swayed — as long as his opinions as father of the bride carry the most weight in all things matrimonial. A prominent architect and family man, Billy feels his hard-fought success and dedication to his heritage earn him the right to call the shots. After all his achievements, why is he suddenly seen as the bad guy?

The same could also be said for Adan’s equally headstrong father, Hernan (Pedro Damián), who soon arrives with his own traditions and family pride in tow. With both iron-willed fathers vying to take charge of the festivities, it becomes a prideful game of one-upmanship, as cultures clash, generations take sides and competing traditions collide. Family relationships are tested, along with the couple at the center of it all, as the roller coaster ride of wedding planning races toward the altar.

The film is scheduled to be released on June 16 by HBO Max.

Global superstar Jennifer Lopez reflects on her multifaceted career and the pressure of life in the spotlight in this intimate documentary.

The film will be released June 14 on Netflix.

There are no bars, no cells, or orange jumpsuits. In Spiderhead, incarcerated volunteers are free to be themselves. Until they’re not. At times, they’re a better version. Need to lighten up? There’s a drug for that. At a loss for words? There’s a drug for that, too. But when two subjects, Jeff (Miles Teller) and Lizzy (Jurnee Smollett), form a connection, their path to redemption take a twisty turn, as Abnesti’s experiments start to push the limits of free will altogether.

The film is scheduled to be released on Netflix on June 17.

“Jerry & Marge Go Large” is inspired by the remarkable true story of retiree Jerry Selbee (Cranston), who discovers a mathematical loophole in the Massachusetts lottery and, with the help of his wife, Marge (Bening), wins millions and uses the money to revive their small Michigan town.

The film will be released June 17 on Paramount+.

Fresh out of college and without a clear life path going forward, 22-year-old Andrew (Cooper Raiff) is stuck back at home with his family in New Jersey. But if there’s one thing that belongs on his nonexistent résumé, it’s how to get a party started, which lands him the perfect job of motivational dancing at the bar and bat mitzvahs for his younger brother’s classmates.

When Andrew befriends a local mom, Domino (Dakota Johnson), and her daughter, Lola (Vanessa Burghardt), he finally discovers a future he wants — even if it might not be his own.

The film is scheduled to be released June 17 simultaneously in limited theaters and on Apple TV+.

Undeterred by his lack of success, Brian attempts his biggest project yet. Three days, a washing machine, and various spare parts later, he’s invented Charles, an artificially intelligent robot who learns English from a dictionary and is obsessed with cabbages. What follows is a humorous and entirely heartwarming story about friendship, family, finding love, and letting go.

The film is scheduled for release on June 17 by Focus Features.

‘Good Luck to You, Leo Grande’

As Nancy embarks on a post-marital sexual awakening and Leo draws on his skills and charm, together they find a surprising human connection.

The film is scheduled for release June 17 by Searchlight Pictures as a Hulu original film.