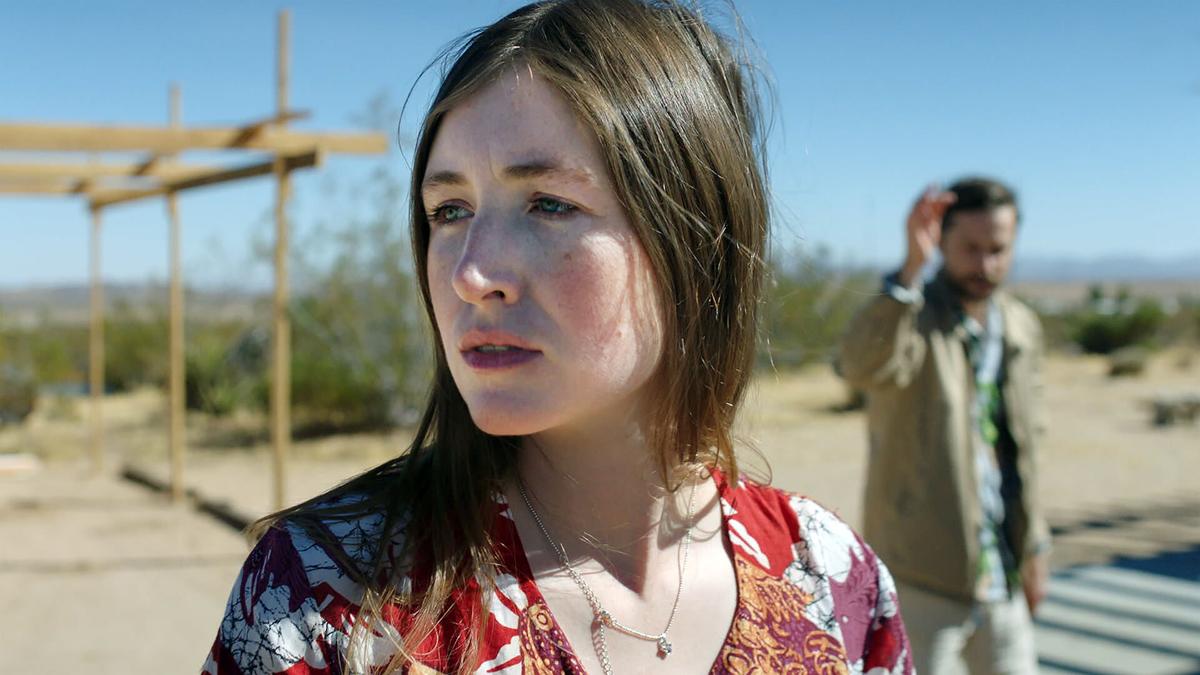 For reasons I have long since forgotten, my first college research essay examined suicide clusters and the conditions that could serve as a trigger that sparks a spike of emulation suicides. It is widely accepted that certain personalities are predisposed to suicide contagion through exposure to suicidal behaviors in a peer group, family setting, social milieu, extended community or through the media. According to the U.S. Department of Health & Human Services, direct and indirect exposure to suicidal behavior has been shown to precede an increase in suicidal behavior in persons at risk for suicide, especially in adolescents and young adults.

“She Dies Tomorrow” — a new film written, directed, and produced by Amy Seimetz — isn’t necessarily about suicide. It is, however, about an ideological contagion. Given the current state of the world, the film’s themes are patently relevant. Seimetz delivers her tale of infectious dread and virulent intuition with less regard to plot and direction than to impact and consequence. The film is a thought experiment masquerading as a psychological thriller, punctuated by glimpses of surreal horror that manifest in unintelligible disembodied whispers, trippy blue and crimson flashing lights and patchy blood spillage.

Here's the gist: Amy (Kate Lyn Sheil), a new homeowner, wakes up one day convinced that she is going to die tomorrow. She meanders through her house, navigating unpacked boxes of belongings, clearly grappling with overwhelming anxiety — though the source of her specific depression is never thoroughly revealed. Flashbacks offer tantalizing hints, but the director clearly wants to keep the audience mostly in the dark. In fact, all the viewer really learns is that Amy is a recovering alcoholic, she had a recent romantic relationship that ended abruptly and she is confident she has less than 24 hours to live.

Eventually, Amy — who has been drinking wine and playing Lacrimosa from Wolfgang Amadeus Mozart’s Requiem over and over again — shares her belief that she will die tomorrow with Jane (Jane Adams). Jane initially dismisses her friend’s proclamation and gently reprimands her for relapsing. A short time later, Jane has her own revelation: She, too, will die tomorrow.

And so it goes: Jane, frightened and confused and wearing her pajamas, drives to her brother’s house and interrupts her sister-in-law’s birthday celebration to share her premonition. In attendance are Jane’s brother Jason (Chris Messina), his wife Susan (Katie Aselton), along with their friends Tilly and Brian (Jennifer Kim and Tunde Adebimpe). Reactions range from concern to contempt, but eventually all are infected: All believe death is imminent.

Early in the film, as the ideological contagion spreads, Seimetz renders scenes as if borrowing from David Lynch’s painter's palette. Impressionistic and surreal, “She Dies Tomorrow” is a deluge of existential dread underscoring our recognition that we are transitory beings whose lives are played out against an often harsh and unforgiving backdrop.

“I was dealing with my own personal anxiety and found I was spreading my panic to other people by talking about it perhaps too excessively — while simultaneously watching a ton of news and watching mass anxiety spreading on the right and left politically,” the director said in production notes for the film. “All this while remembering losing my father and many friends, that we all die at some point. We don’t know what to do but keep living, realizing the absurdity and tragedy that ‘with life comes death.’”

Seimetz said all stories are about death to her.

“’Carpe diem,’ coming of age, sci-fi, horror obviously ... even love stories are about death,” she said. “That may sound dark, but none of these moments would matter without the finite span of life. If we lived forever moments of choice would be a dime a dozen.”

The COVID-19 pandemic has spawned its own tsunami of communicable anxiety. Though not necessarily intended as such, “She Dies Tomorrow” can certainly be viewed as a metaphor for the recent surge of existential realizations. That realization plays out differently depending upon the individual.

“Terror aroused by the realization of our own mortality can fuel a tendency to be punishing or hateful, pitting us against enemies or alienating us from our loved ones,” wrote Lisa Firestone Ph.D., in a 2012 essay for Psychology Today. “It can lead us to limit ourselves or to defend against living fully.”

The characters in “She Dies Tomorrow” struggle with their mortality just as members of society are currently trying to balance mask-wearing and social-distancing guidelines with the basic need for human contact and social interaction. The virulence of the ideological contagion at the heart of the film also parallels modern apocalypticism. Just as the individual characters in “She Dies Tomorrow” foresee their own deaths, various religious and secular groups spread the belief that the end of the world is imminent and that a global cataclysm will wipe out those who are not sufficiently prepared.

“She Dies Tomorrow” doesn’t specifically mention pandemics, doomsday cults or catastrophic global events. In fact, it is very lean when it comes to details. While the film is thought-provoking, it is exasperatingly aimless. Seimetz crafts a captivating mystery, but she has no intention of unraveling it in the end. She abandons her audience just as she abandons her characters. Ambiguous endings aren’t always objectionable, but in this instance the director simply doesn’t give the viewer enough momentum to draw logical conclusions. It feels unfinished and futile. And, yes, some of the characters in the film probably felt that their lives were unfinished and futile — but that doesn’t change the fact that “She Dies Tomorrow” is a just a visually dazzling absurdist fairy tale suffocated by vagueness and ambiguity.

“She Dies Tomorrow” was released Aug. 7 via video on demand and may be rented through Amazon Prime, Vudu, Fandango Now, Apple TV, Google Play and other platforms.