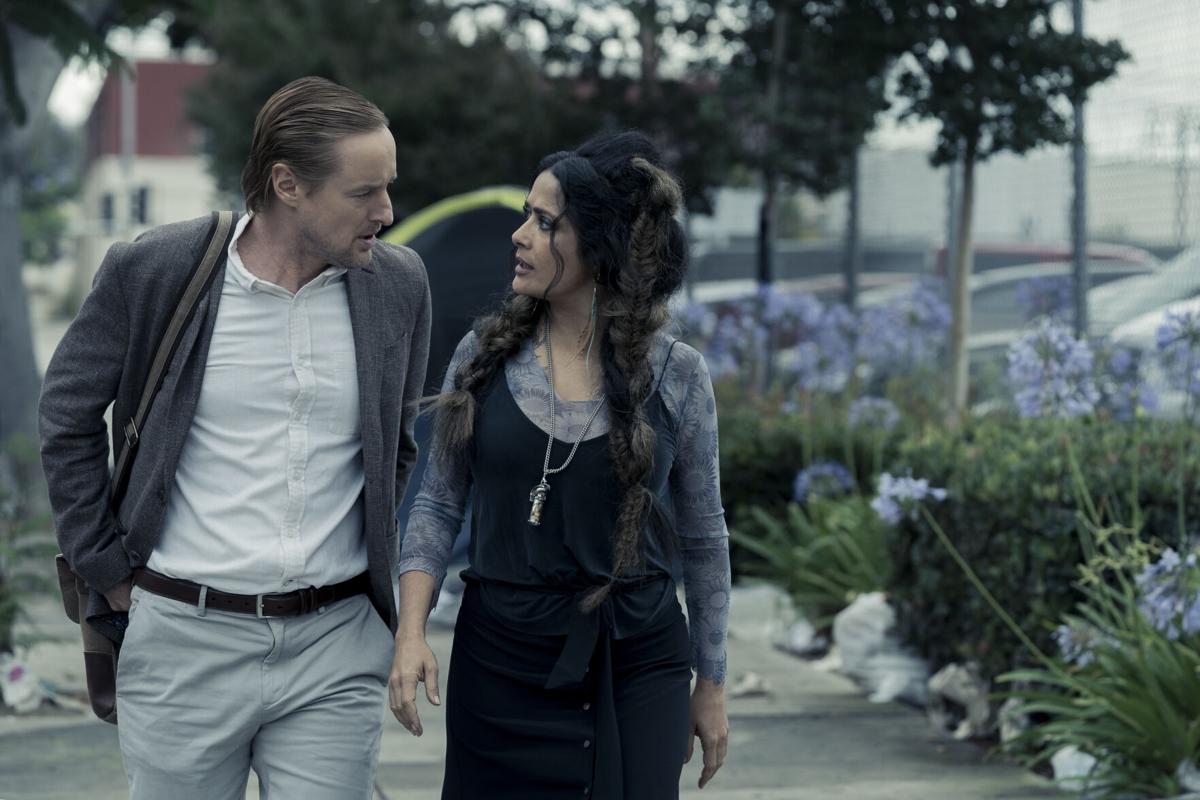 Remember the reality-warping Cameron Crowe film “Vanilla Sky” starring Tom Cruise? Can you believe it’s been 20 years since that movie was released? It was billed as a science fiction psychological thriller – probably because the story drifts aimlessly through half a dozen subgenres before reaching its shocking revelation in the final act. As I recall, “Vanilla Sky” had more detractors than admirers. Dripping with deliberate ambiguity, it fell far short of expectations for many viewers, with Cruise’s unsympathetic, narcissistic character plodding along through an incoherent dreamscape.

In “Bliss,” released Feb. 5 by Amazon Studios, viewers face a somewhat similar theme as Greg (Owen Wilson) loses his capacity to distinguish fantasy from reality. In this case, his worldview is abruptly altered when he meets Isabel (Salma Hayek), a mysterious homeless woman who convinces him that only a handful of people are “real.” The world around them, she explains, is a computer simulation. She “proves” this fact by sharing yellow crystals that allow him to telekinetically control all aspects of his immediate environment.

It's probably important to point out that when Greg meets Isabel, he isn’t at the top of his game. He is divorced. He mentions needing pills to help cope with pain from a recent injury. The viewer first sees him in his office at work, ignoring incoming calls, as he sketches scenes he has seen in a dream – a dream with which he is clearly obsessed.

After half a dozen requests, he finally answers a summons from his boss, who promptly fires him. What happens next – well, it’s not exactly clear.

A short time later, he’s sitting in a bar with Isabel, discovering that what he believes is real may all be an elaborate fabrication. Or, maybe something else is responsible for warping his perception.

As Greg starts to embrace Isabel’s revelation, she encourages him to take advantage of the fact that everyone around them is an FGP – a Fake Generated Person. There is nothing unethical about hurting pretend people. The couple, now falling in love, expose a level of cruelty and violence that apparently lurks just beneath the charade of decency. Using their god-like telekinetic, they initially engage in low-level acts of retribution, tripping skaters at a roller rink. It’s only a matter of time, however, before they employ those powers for more violent assaults.

One aspect of his life in the simulated world keeps Greg from committing to Isabel’s version of reality. Greg’s daughter Emily (Nesta Cooper) is the only person from his prior life that won’t give up on him. Throughout the film, she tries not only to connect with him, but to encourage him to choose the path that is best for him.

“Humans have an important relationship with the unreal,” said Mike Cahill, writer and director of the film. “I wanted to tell a story about the fragility of the mind and the malleability of our perception. I particularly wanted to make a film that treated different ways of seeing the world with compassion and empathy, as opposed to judgement. To me this is an important bridge of connection humans need and I felt like I had a way to dramatize this idea and make it fun, exciting, thrilling, all while retaining its emotional potency.”

Unfortunately, “Bliss” isn’t fun, exciting or thrilling. It’s a disorienting slog built around an interesting premise that could have led down some fascinating narrative paths, but the screenplay gets bogged down with exploring multi-layered social and psychological issues. Its themes are disorganized and undeveloped, its plot is too labyrinthine to follow and its main characters are shallow and unlikeable. Both Wilson and Hayek are capable of delivering riveting performances. Both have been nominated for Oscars during their long careers. Yet, for “Bliss,” neither actor seems comfortable. Hayek never achieves any consistency as Isabel, adjusting her personality from mysterious and charismatic to vindictive and fanatical to desperate and clingy. Owen achieves more uniformity with his character, but there is still a level of detachment that suggests the actor did not want to walk in Greg’s shoes for very long. Cooper turns in the best performance in the film, endearing Emily to viewer for her persistence and her unconditional love.

Whenever a film proclaims itself a “mind-bending experience,” viewers expect something extraordinary. “Bliss” comes closer to being mind-numbing with its repetitive tedium and its descent into incoherence. The problem with “Bliss” is that the viewer, like the main characters, must determine what is real and what is unreal, which is conditional depending upon perspective and the reliability of the narrative as presented by potentially untrustworthy characters. By the time the audience recognizes the cause-and-effect engine driving Greg’s delusions, it is far too late for the story to have a significant emotional impact. Moreover, the conclusion actually contradicts earlier plot points. If Cahill did that to establish open-ended ambiguity, it simply undercuts the one message that he finally managed to get across to the viewer. If the paradoxes weren’t intentional, then it’s another indication that the screenplay could have used a little more refining before production began.