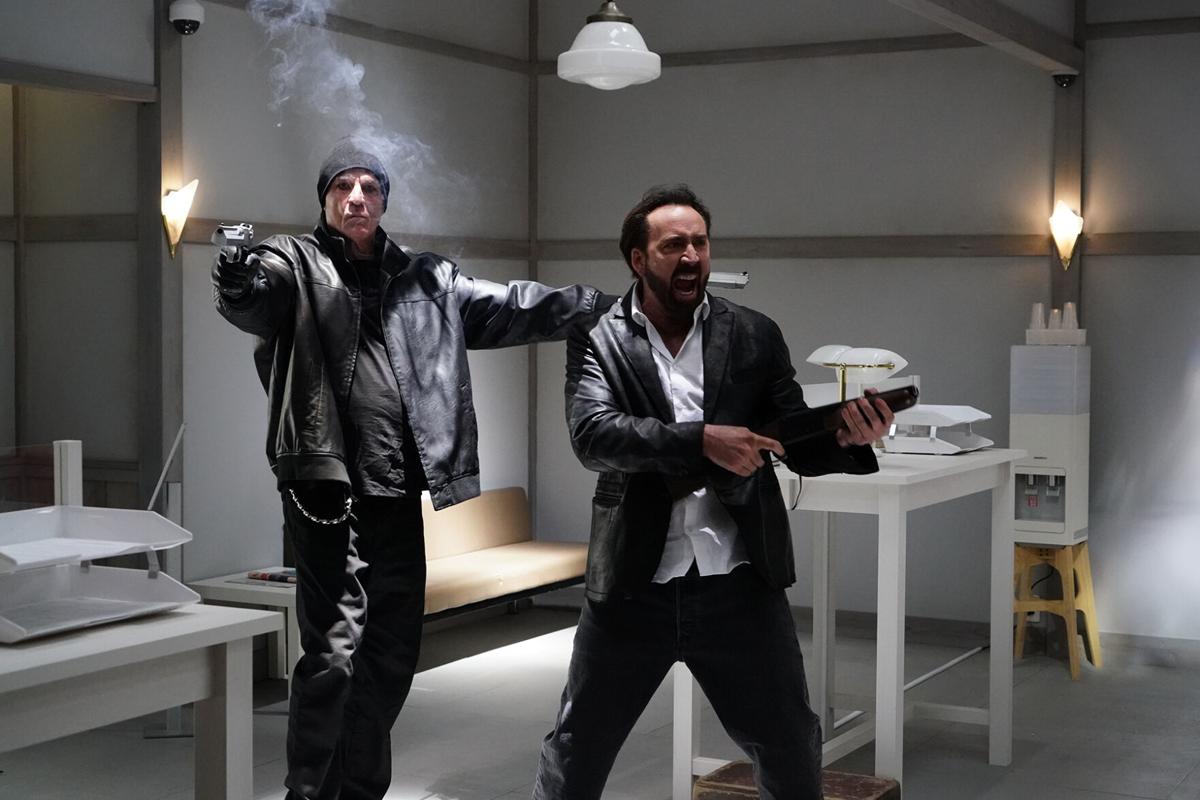 Nick Cassavetes, left, and Nicolas Cage star in “Prisoners of the Ghostland.”

Dreams are vehicles that can transport us to impossible destinations, reunite us with the dead, and goad us with visions of unachieved goals and unresolved conflicts. Dreams rarely adhere to the standard laws of logic which govern our daily lives, and often unfold in a nonlinear trajectory. They may compel us to reexamine ourselves from a new perspective or provide a fertile source of creative inspiration.

There are more than a few films that are either set in dreams or utilize a dreamlike milieu to emphasize unreality. “The Wizard of Oz” is certainly the most recognizable example, with its fantastical dreamworld imprinted upon generation after generation of children. Wes Craven’s 1984 horror film “A Nightmare on Elm Street” is similarly memorable, though with a decidedly more macabre tone. Director David Lynch frequently blurs the line between dreams and reality in his films, as in 2001’s “Mulholland Drive.”

“Prisoners of the Ghostland” may or may not be a hallucinatory experience. Sion Sono directed this unconventional American neo-noir Western action piece starring Nicolas Cage, Sofia Boutella, and Bill Moseley. The movie was released in theaters and on video on demand Sept. 17 by RLJE Films.

The story involves a wealthy warlord known only as the Governor (Moseley) who presides over Samurai Town, ruling in true despotic fashion and commanding a small army of indentured ruffians. When Bernice (Boutella), one of his “adopted granddaughters,” goes missing, he commissions Hero, a convicted bank robber, to track her down and return her to him. A few important story notes: First, the Governor’s “granddaughters” are actually sex slaves. Second, Bernice — along with two others — fled from captivity seeking freedom. Third, Hero accepts the mission with the understanding that the Governor will grant him a pardon and release him.

Before Hero sets out to find Bernice in the wasteland outside the city, the Governor forces him to put on a bodysuit outfitted with multiple explosive charges rigged to detonate should the morally challenged protagonist veer from the task at hand.

While “Prisoners of the Ghostland” may not be completely coherent, it visually arresting and surprisingly detailed. Cage’s involvement should be enough indication that Sono’s film will be a wild, cartoonish, bonkers ride. The journey takes viewers through a patchwork playground made up of bits and pieces from Sergio Leone, John Carpenter, Akira Kurosawa, Hayao Miyazaki, and Lloyd Kaufman. It’s part spaghetti western, part samurai cinema, and part post-apocalyptic adventure.

Watching “Prisoners of the Ghostland” also calls to mind a trend in 1980s music videos that utilized post-apocalyptic settings. Intentional or not, the film serves as a kind of homage to this curious subgenre, featured in music videos such as Rick Springfield’s "Bop 'Til You Drop,” Tom Petty and the Heartbreakers’ "You Got Lucky,” Don Henley’s "All She Wants to Do is Dance,” Billy Idol’s "Dancing with Myself,” Duran Duran’s "The Wild Boys," and Deep Purple’s "Knocking at Your Back Door.”

One cannot help but compare Hero to Snake Plissken, though Cage’s obligatory over-the-top performance sets this film’s protagonist apart from Kurt Russell’s classic anti-hero in “Escape from New York.” That signature Cage madness helps keep viewers’ attention when the film’s pacing slows to a crawl. “Prisoners of the Ghostland” suffers from sporadic aimlessness, as if Sono is struggling to connect the dots of this surreal mashup. Even in the most tedious moments, though, Sono fills the screen with something interesting. His focus is often more directed toward world-building than character development, serving up attention-grabbing imagery and fascinating settings that underscore the otherworldly aspects of the story. The Ghostland could certainly serve as a metaphor for hell or purgatory.

Approach “Prisoners of the Ghostland” as an eccentric love child of pop art and surrealism. It is exquisite absurdity. It is dreadfulness made mesmerizing. Its characters are different degrees of malignant, all condemned to suffer as they seek redemption. The film’s odd magnetism — which admittedly will only affect a niche audience — lies in its transcendence as a cinematic aberration.

“Using the rather classic, orthodox storytelling of action films, I created the ‘east meets west’ world that doesn’t exist anywhere else,” Sono wrote in production notes for the film. “But what I really wanted to create behind all that is distortions of the modern society making real of the unreal world. I believe we are living in an irrational world. The irrationalities we feel everyday are sprinkled throughout in this samurai western action film.”

If this film had been made 40 years ago, it would have achieved cult status long ago and would probably prompt fans to cosplay every minor character with unbridled glee. With its post-apocalyptic backdrop and its setting fixed in an undefined space seemingly between dream and the waking world, “Prisoners of the Ghostland” is a fascinating, unhinged hodgepodge that as a whole is more gratifying than lucid, more memorable than profound.