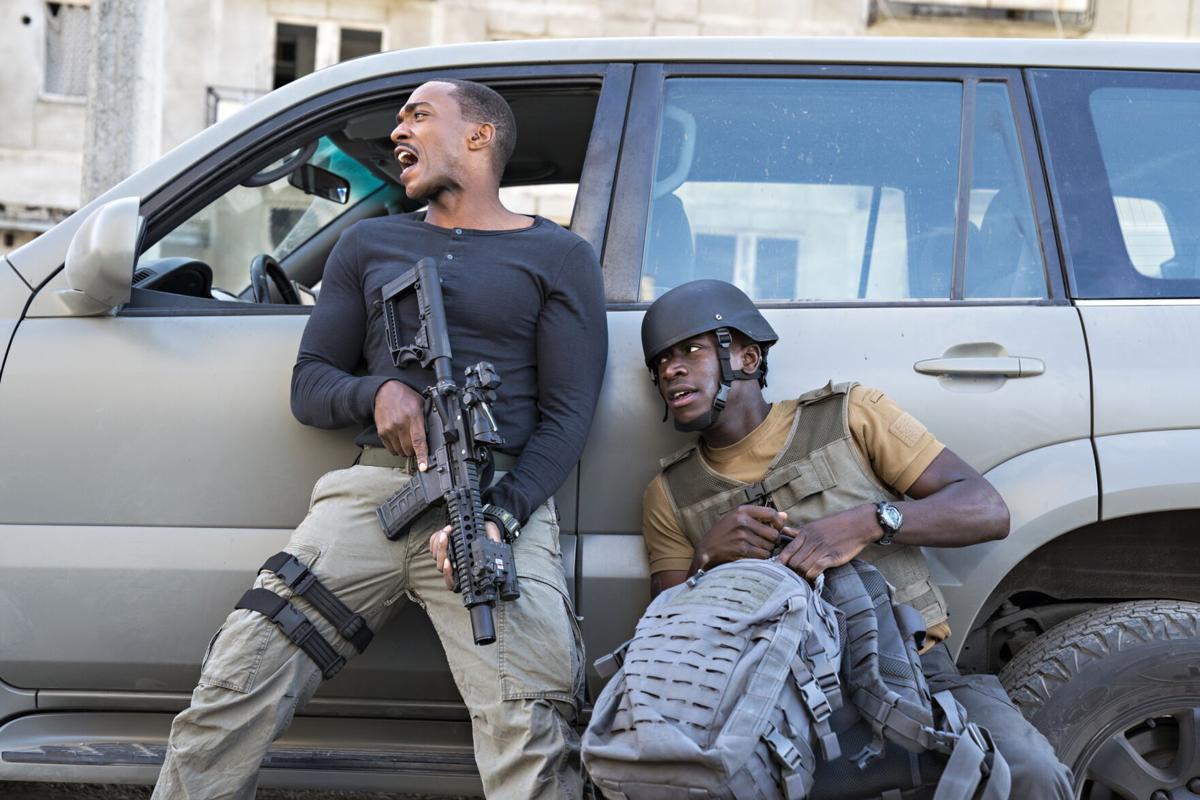 Anthony Mackie, left, stars as Leo and Damson Idris as Harp in “Outside the Wire.”

Exactly how long have we been expecting robots to take over the world? According to Wikipedia, L. Frank Baum introduced his readers to Tik-Tok, the first mechanical man assuming a humanoid appearance, in “Ozma of Oz.” In cinema, among the earliest appearances of a mechanical man came in the 1919 theatrical serial “The Master Mystery,” starring Harry Houdini. Maria, the Maschinenmensch — or “Machine Person” — from Fritz Lang’s 1927 film “Metropolis,” that is commonly recognized as the first major robot in film. Then, in the 1940s, Isaac Asimov writes and publishes a number of tales about robots that will eventually be pulled together his 1950 collection “I, Robot,” which includes the short story “Runaround” that introduces Asimov's Three Laws of Robotics:

• Second Law: A robot must obey the orders given it by human beings except where such orders would conflict with the First Law.

• Third Law: A robot must protect its own existence as long as such protection does not conflict with the First or Second Law.

To be frank: Every science fiction writer since the 1950s has been riffing on Asimov's ideas.

In most 1960 films and cartoons, robots were usually subordinate housekeepers, servants, or support for space explorers. Evil robots started to appear as antagonists, too. Some turned to villainy due to bad programming or malfunction and others designed to be deadly, such as the exploding female robots in that cinematic masterpiece “Dr. Goldfoot and the Girl Bombs.”

Movie robots seem to get more malevolent with each decade. Just ask the Gunslinger (Yul Brynner) from “Westworld,” the robot spiders from “Runaway,” T-800 (Arnold Schwarzenegger), the robot assassin in “The Terminator,” and the Sentinels from “The Matrix.”

Directed by Mikael Hafstrom, “Outside the Wire” is a new addition to the genre that relies heavily upon familiar tropes to deliver a rambling rise-of-the-machines parable that fails to entertain or enlighten its audience. The film was released by Netflix Jan. 15.

Set in 2036, U.S. peacekeeping forces have been deployed to Ukraine where insurgents and Russian mercenaries are trying to overthrow the government. After disobeying a direct order that results in the deaths of two Marines, as well as the destruction of one very expensive “gump,” a robot soldier, drone pilot Lt. Thomas Harp (Damson Idris), operating from a base on U.S. soil, narrowly evades a court-martial. Instead, he is reassigned to the war zone as a disciplinary measure. Harp has no prior experience in actual combat, and his superiors apparently believe that putting him on the ground might somehow improve his ability to follow orders.

Arriving at Camp Nathaniel, the U.S. base of operations in Ukraine, he reports to Capt. Leo (Anthony Mackie). Leo requested Harp because of his ability to think “outside the box.” Translation: He’s looking for someone willing to break rules to complete a mission.

In fact, Leo is actually a robot soldier, but far more advanced than the gumps. Or maybe he’s an android, or a cyborg, or a prototype biotech Frankenstein’s monster. The script references all of these possibilities without really committing fully to any of them. The revelation comes early in the film when Leo takes off his shirt and his exterior coat of pseudo-flesh temporarily dematerializes exposing a translucent frame encasing … well, robot parts, I guess. If you’re old enough to remember Pulsar, Mattel’s 1976 toy with the see-through chest that displayed his internal organs, that seems to be what inspired the CGI team. Except, like the Tin Woodsman in “The Wizard of Oz,” Leo doesn’t have a heart (or lungs, or any recognizable guts).

Believe it or not, that’s not the only secret Leo has been keeping. The super soldier has his own agenda, and he partners with Harp to track down pro-Russian terrorist Victor Koval (Pilou Asbæk) who is trying to gain access to Soviet era nuclear missiles, presumably to blow up some American cities.

“Outside the Wire” seems uncertain about what it’s seeking to accomplish. It vacillates between high-octane action thriller and brooding war drama.. One minute, the film is focused on depicting the horrors of war, from the shell-shocked civilians looting supply trucks to feed their starving families to children forced to live in an orphanage after losing their homes and loved ones to bombs dropped by drone pilots like Harp. A few scenes later, Leo is systematically burning through the Russian mercenaries single-handedly, using his “more human than human” skills to amass a body count that must top 100 by the film’s climax.

None of the characters are particularly memorable. Early on, the script attempts to set up a buddy-cop chemistry between Harp and Leo, but it never achieves anything close to that. Mackie turns in a strong performance, but Idris remains detached and wood throughout the film. Lacking any emotional depth, his character cannot express the transformation his experiences should have triggered.

The sci-fi element in “Outside the Wire” is used strictly as window dressing. The filmmakers assume audiences aren’t interested in any hard science that might lend credence to the premise. Likewise, viewers aren’t expected to notice glaring plot flaws, such as characters who can quickly travel great distances on foot through hostile territory or promptly locate a target in a vast and unfamiliar military complex.

“Outside the Wire” suffers from a Pinocchio complex: Like the wooden puppet who dreams of becoming a real boy, the film seeks to transcend its mass-market action thriller framework and deliver a somber anti-war message. The viewer knows this because the film’s main characters are continually saying so in longwinded speeches full of cliches. The refrain is so clumsy that it feels disingenuous, particularly when the moralizing is interspersed with one bloodbath after another.

With a runtime of nearly two hours, “Outside the Wire” is too long, too preachy and too erratic. Its tone is inconsistent and its plot is confusing. The action sequences are exhilarating but unmemorable while the protagonist is unapproachable. Instead of creating a new “Terminator,” Hafstrom has given Netflix a B-movie knockoff with respectable special effects but little originality.