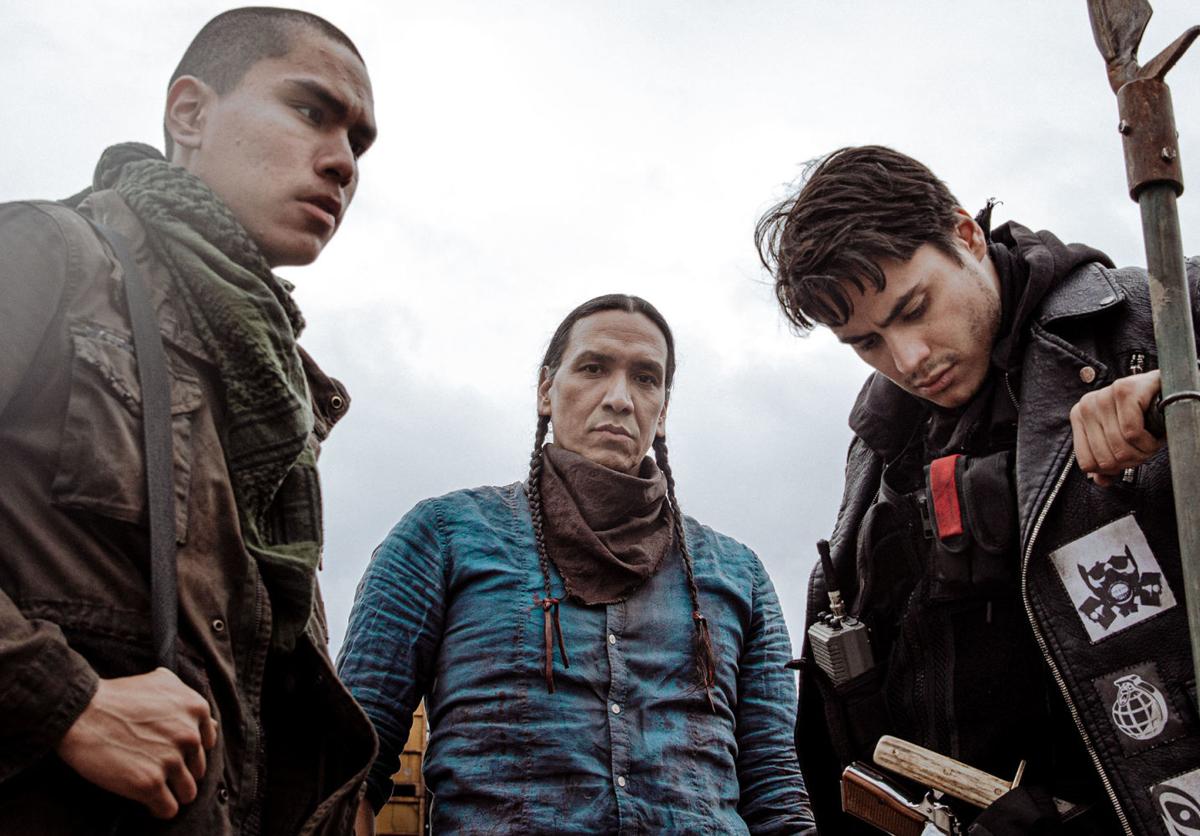 From left, Forrest Goodluck stars as Joseph, Michael Greyeyes as Traylor and Kiowa Gordon as Lysol in “Blood Quantum.”

Call me a glutton for punishment, but during these troubled times — with a pandemic creating social, political and economic chaos and the threat of infection hidden in every cough, on every doorknob and even in the adjoining office cubicle of your asymptomatic coworker — I can’t help but find myself seduced by apocalyptic cinema. And I know very well I’m not alone in that regard. The steady stream of end-of-the-world films — particularly those that focus on what happens after the cataclysm — provides ample evidence that this curious subgenre gained a loyal audience back in the 1970s and 1980s and is still thriving today.

Wynn Gerald Hamonic, Ph.D., suggests that American apocalyptic cinema serves a purpose in society. In his essay "Global Catastrophe in Motion Pictures as Meaning and Message: The Functions of Apocalyptic Cinema in American Film," published in the Journal of Religion & Film in 2017, Hamonic posits that these kinds of films help make sense of the world and its social upheaval, provide strategies for dealing with real-world atrocities, and document the psychological and sociopolitical effect of conflict and trauma. The best of these films critique the existing social order and may function as cautionary tales in hopes of altering the self-destructive trajectory of civilization.

Though the popularity of the subgenre has expanded in the last few decades, it’s hardly a new movement. RKO Radio Pictures released “Deluge,” one of the earliest apocalyptic science fiction films, in 1933. Up through the 1960s, most of these films utilized natural disaster, nuclear war or alien invasion as the catalyst for their civilization-toppling cataclysm. In 1968, George A. Romero offered another nightmarish scenario: an epidemic of zombies.

Since Romero introduced the modern zombie film, there have been countless clones, adaptations, re-interpretations and variations. Some have been extraordinary revivals, some have been mediocre copies and some have downright unwatchable monstrosities.

Happily, “Blood Quantum” is one of the rare examples of a unique, stylish and thought-provoking gore-fest that doubles as an allegory for how the descendants of European colonists — the prevailing white culture — has gradually picked apart and cannibalized the First Nations.

“Blood Quantum” is situated in the isolated Mi’gmaq reserve of Red Crow, where the indigenous community maintains a peaceful but guarded relationship with a predominantly white population of the neighboring town, which is connected by a single bridge across a wide river. Writer/director Jeff Barnaby introduces the oncoming peril quite effectively in an opening sequence. While collecting fish he caught in the river, Gisigu (Stonehorse Lone Goeman) makes a chilling discovery: Even after he’s sliced them open and started gutting them, they’re still flopping. He puts in a call to his son Traylor (Michael Greyeyes), sheriff on the reservation, who stops by later in the day. Traylor, who had to put down a dog in an earlier scene, hears the dead animal thrashing around in the trunk of his squad car. Gisigu and Traylor burn the infected animals — but it isn’t long before it becomes evident that the contagion has already begun turning people into zombies.

Here's the catch: It turns out the indigenous inhabitants are immune to the zombie plague.

Once the end-of-the-world premise is locked into place, Barnaby skips six months into the future. Traylor, his sons, his ex-wife and others from the reservation have established a bastion for survivors and refugees. That uneasy peace that existed between the white population and the indigenous people is significantly strained. One of Traylor’s sons – an antisocial, irresponsible troublemaker going by the name of “Lysol” (Kiowa Gordon) vociferously calls for an expulsion of the townsfolk.

According to the production notes, “Blood Quantum” refers to the American policy of determining indigeneity based on the percentage of one’s indigenous heritage. Those with 51% indigenous blood quantum are considered a “status Indian.” Anything less than 50% means the loss of that status. The practice can be used as a tool of political control and cultural extermination.

Barnaby takes that paradigm and flips it: In the film, one’s indigenous heritage determines whether or not they are immune to the bite of a zombie. “Blood Quantum” also stands as an indictment of contemporary xenophobia, as politicians advocate for the building of walls and the closing of borders. Barnaby pits compassion and empathy against hate and distrust, showing the grim consequences of inciting anger and racism.

Even with its clear condemnation of society and its methodically developed family drama detailing the conflict between its well-developed characters, “Blood Quantum” never lets the viewer forget it is a zombie film. Barnaby doesn’t skimp on the viscera. Blood spurts and spatters, gooey entrails are torn from victims and the undead are slaughtered in ghastly, gleefully graphic scenes. The message doesn’t impede the massacre; the carnage doesn’t eclipse the social commentary.

So, for those who don’t find apocalyptic cinema involving an infectious plague and the collapse of society off-putting given current events, “Blood Quantum” is a gory spectacle that is entertaining and provocative. Romero would certainly approve.

“Blood Quantum” was acquired by Shudder and is now available to stream with a subscription. Be thankful you can watch it alone or with family in the comfort and security of your home and not in a crowded movie theater where some other patron, two rows behind you, might suddenly sneeze — or try to eat your brains.