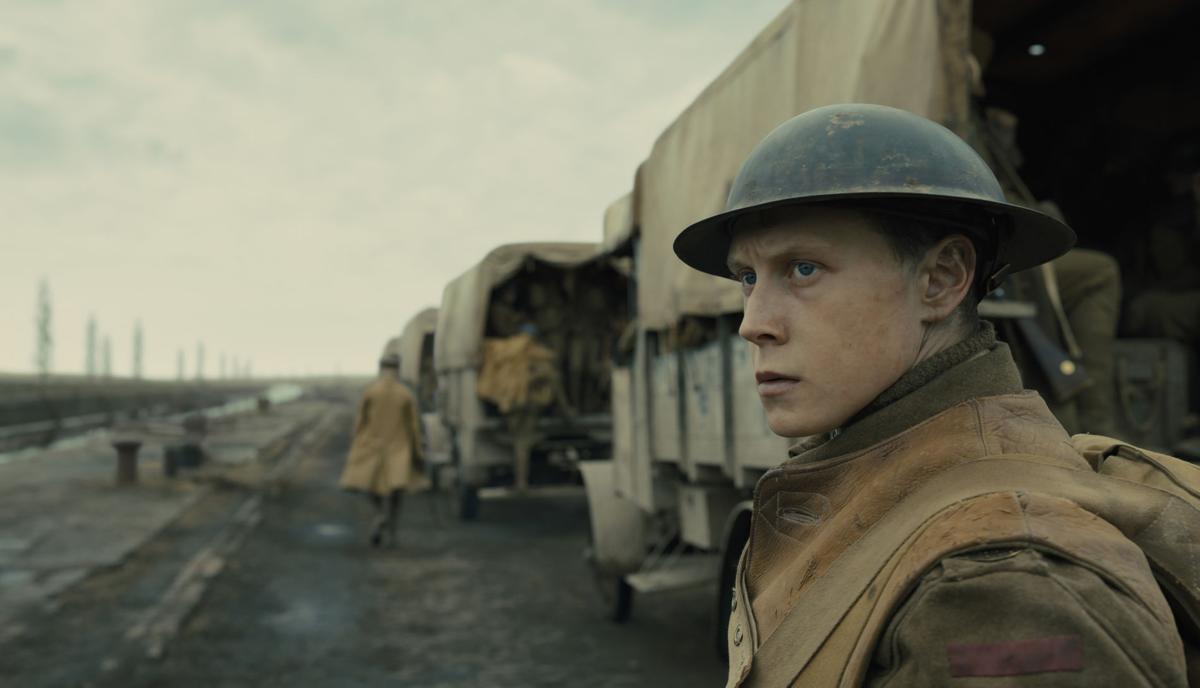 George MacKay as Schofield in "1917," the new epic from Oscar-winning filmmaker Sam Mendes.

As a kid growing up in the 1970s, World War II cues were virtually ubiquitous.

Its impact continued to saturate American culture more than 25 years after the cessation of hostilities. On television, documentaries such as “The World at War” chronicled the conflict, capturing the carnage in graphic newsreel footage. Hollywood continued to produce films dramatizing wartime events, from “Tora! Tora! Tora!” in 1970 to “Midway” in 1976 and “A Bridge Too Far” in 1977. Even toy product lines had direct ties to the war, with Marx producing the Navarone playset into the mid-1970s and Hasbro continuing its line of 12-inch G.I. Joe action figures that had gained popularity in the 1960s.

It wasn’t until much later that I became better acquainted with the history of World War I — also known as “the Great War,” the “Seminal Catastrophe” and the sadly invalidated “war to end all wars.” But the objective accounts in tedious school textbooks regrettably failed to reveal the staggering tragedy of one of the world’s deadliest conflicts. For me, it was the work of poet Wilfred Owen that exposed the true brutality of the battlefield. At a time when contemporary writers penned patriotic verses glorifying war, Owen’s poetry recorded the horrors of trench warfare as seen from the perspective of a soldier serving on the front line. Lines from “Dulce et Decorum est,” “Insensibility,” “Anthem for Doomed Youth” and “Futility” are as accurate and honest today as they were a hundred years ago.

The gut-wrenching realism of Owen’s poetic imagery is echoed throughout the new epic war drama “1917.” Directed, co-written and produced by Sam Mendes, the film plays out as a survival narrative against the backdrop of war-torn northern France. At the beginning of the film, two British soldiers — Lance Cpl. Tom Blake (Dean-Charles Chapman) and Lance Cpl. Will Schofield (George MacKay) — are tapped for a critical mission: They must travel over enemy-held territory to hand-deliver a message to the 2nd Battalion of the Devonshire Regiment. The message is an order to call off a planned attack on the German forces, as reconnaissance has shown the 1,600 soldiers are walking into a trap. For one of the two men, the undertaking is made even more imperative because his older brother happens to be among the seemingly doomed battalion.

Filmed and edited to make the action appear as one continuous shot, “1917” places the viewer in the midst of the chaos, delivering chilling glimpses of life and death in the trenches. Blake and Schofield begin their journey with a nerve-wracking sequence as they cross no man’s land and infiltrate the abandoned German front.

Mendes emphasizes plot and technique above all else in “1917.” We learn just enough about Blake and Schofield to generate empathy. Supporting characters appear only briefly, interact with Blake and Schofield, and then disappear into the background. Tangential stories emerge, but those threads come to an abrupt end when the primary storyline advances beyond their boundaries. It can be jarring for the audience as they are left without closure — but that’s part of the film’s authenticity, isn’t it? Those supporting characters are depicted by a talented cast that includes Mark Strong, Andrew Scott, Richard Madden, Claire Duburcq, Colin Firth and Benedict Cumberbatch.

The film is brimming with contrasting images: The setting shifts quickly, moving from apocalyptic combat zones to picturesque countryside farmsteads to the rubble-strewn streets of a heavily shelled city. Moments of genuine compassion are set against the compulsion to seek revenge. Mendes manages to convey both the meaninglessness and the indifference of war while elevating individual acts of selflessness, loyalty and courage. Don’t misunderstand: “1917” does not need to sermonize. It doesn’t need long-winded soliloquys to hammer home a specific truism. Its message is conveyed through harrowing images of death and destruction — as well as acts of heroism and last-minute desperation. Valor isn’t a situational reaction: A hero is hero in the face of cataclysmic adversity or quiet anguish.

In “Anthem for Doomed Youth,” Owen penned the lines:

What passing-bells for these who die as cattle? / — Only the monstrous anger of the guns. / Only the stuttering rifles' rapid rattle / Can patter out their hasty orisons.

Mendes’ film — based in part on an account told to Mendes by his paternal grandfather, Alfred Mendes — provides a haunting glimpse at humanity’s seemingly incurable recklessness. Tense and emotionally draining, “1917” shows that malice and cruelty are as much a part of our nature as benevolence, charity and compassion. Passionately cinematic, it is a film that demands to be viewed on the big screen. Immersive and inspiring, its visceral palette brings history to life while encouraging us to reflect on how far we have progressed since the “war to end all wars.”