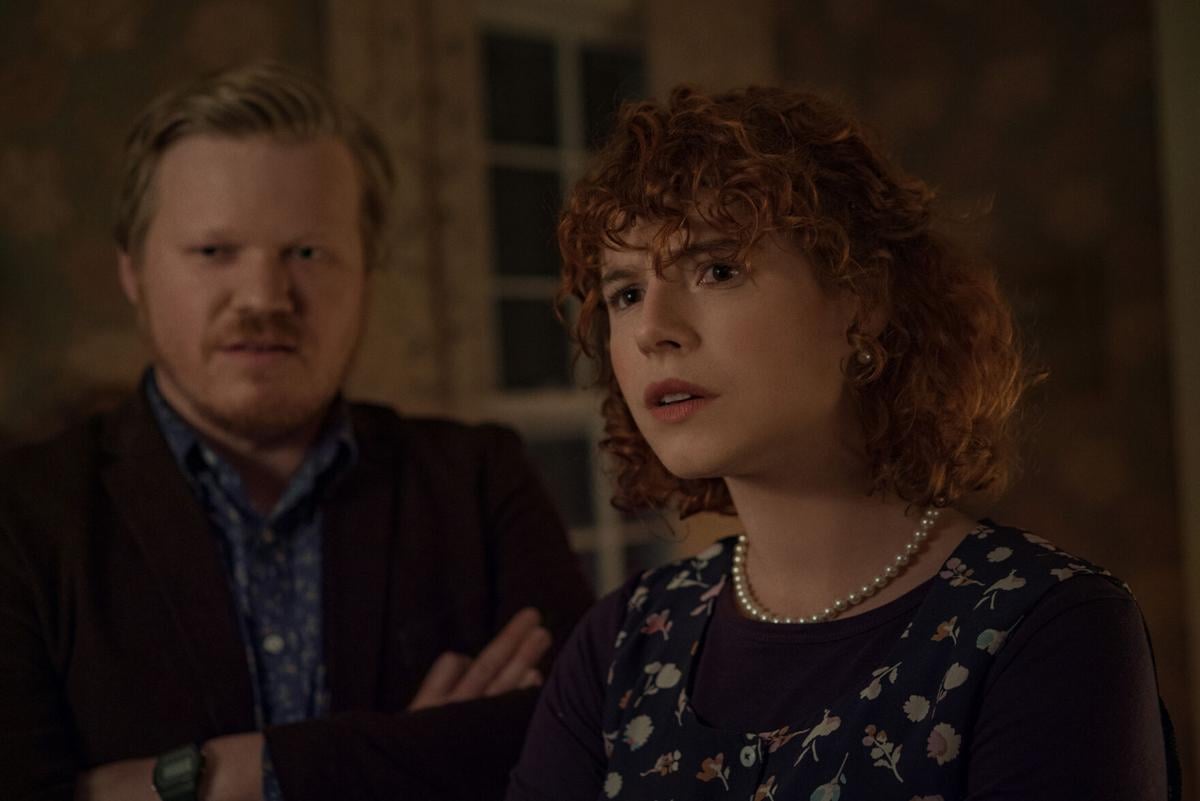 Jesse Plemons stars as Jake and Jessie Buckley as his girlfriend in “I’m Thinking of Ending Things.”

When I was 20 years younger, I suffered from mild wanderlust. Weekends provided the raw material required for road trips: time and a complete lack of direction. Hopping into the car for a day’s excursion down the backroads of Central Florida might seem like a meager excuse for adventure, but exploring unfamiliar territory and discovering new, pastoral vistas far removed from Pinellas County’s traffic-laden, built-out landscape was a much needed escape.

Sharing those escapades with someone significant made them even more stimulating as conversation allowed us to map new relationship terrain as the miles accumulated behind us.

“I’m Thinking of Ending Things” revolves around a road trip. Unlike my favorite excursions — which generally followed a “destination unknown” motif — the film places a young man and woman in a car during a snowstorm with a specific objective: They are en route to the farmhouse where he was raised so he can introduce her to his parents. The viewer learns that the couple has only been romantically involved for a matter of months.

Before reading any further, be aware that it would be impossible to present a thorough review of this film without revealing major plot points and stylistic elements. If you want to avoid spoilers, stop reading now!

The narrative starts out on shaky ground as the viewer listens to an internal monologue in which the young woman repeatedly states that she is “thinking of ending things.” It is unclear whether she is having second thoughts about the relationship or if she is entertaining suicidal thoughts … or both. Or neither.

As this expedition progresses, everything but the landscape changes. At first, it’s almost imperceptible: minor physical alternations, slight inconsistences in background information, differences in tone and personality. Once the couple arrives at the family farm, the deviations become more evident. It becomes obvious that the story isn’t necessarily following a linear path. It is being subjected to continual revision and variation.

Among the deviations, certain patterns begin to emerge. The young man — Jake (Jesse Plemons) — is a “great man,” better than his peers because he was born with no intellectual gifts and yet he managed to achieve greatness. His achievements, though, on closer inspection appear superficial. He can recite poetry and quote philosophical precepts. When challenged, however, his responses reveal his limited grasp of the subject and that he relies upon the interpretations of others. He emotionally stunted, as is evidenced by his childish outbursts, his defensiveness and his narcissism. Jake has constructed a flimsy façade of omniscience and empathy that cannot hold up under intense scrutiny. His skewed perception can be seen as both a symptom of his vanity and a defense mechanism against existential nihilism.

The film’s surrealist style ironically brings into focus the fact that the story is being presented through the lens of Jake’s reminiscences. A classic example of an unreliable narrator, Jake’s memories are a patchwork of idealized self-aggrandizement, childhood fear, nostalgia, repressed indignity and regret — all of which may well be further eroded by encroaching dementia.

“I’m Thinking of Ending Things” is adapted from Iain Reid’s unnerving debut novel, which was a finalist for the Shirley Jackson Award which honors achievement in the suspense, horror, and thriller genres.

According to the production notes, director Charlie Kaufman read the novel as soon as it was published and was deeply intrigued — enough so to begin imagining it as his next film project.

“The dreaminess of the novel is what I responded to most,” he said. “It felt like it existed in some sort of slightly irrational realm. Once I started writing, there were things in the book that I wanted to explore and understand more. I wanted to give the woman character a sense of existence, an agency, that almost by definition she doesn’t have in the book. And I wanted to make the story more complicated in terms of human interaction.”

Kaufman’s screenplay stands as a distinct piece of work.

“That’s one of the fun aspects of Charlie’s process,” said Anthony Bregman, one of the film’s producers. “You don’t really know where his adaptation will go. The book is already heightened and very unconventional, and the movie even more so. But what’s cinematic about the book, and the movie, is that it’s about brain time, our perception of reality, and how we understand what we see, and relate it to something that’s happening in the real world.”

In scene after scene, each member of the distinguished cast renders engrossing portraits of these impressionistic characters whose contours shift as Jake continually reworks his own story. In addition to Plemons, the film stars Jessie Buckley, Toni Collette and David Thewlis.

I think Jake has something in common with Willy Loman, the tragic character at the center of Arthur Miller's classic play “Death of a Salesman.” Like Willy, Jake stands within a shrine he erected to give his life meaning, watching as it crumbles all around him.

Kaufman delivers a jarring, spellbinding exploration of the internal processes that lead to psychological revisionism. Buried within the tête-à-tête in Jake’s sedan is a phrase that sums up this surreal American gothic nightmare: “beautiful in a bleak, heartbroken kind of way.” The film can be viewed as a psychological drama or as existential horror with a strong thread of cosmicism. Love it or hate it, “I’m Thinking of Ending Things” is weird, unrelenting and challenging — which makes it a good fit for the cinematic landscape of 2020.

“I'm Thinking of Ending Things” was released in select theaters on Aug. 28 before making its debut Sept. 4 on Netflix.