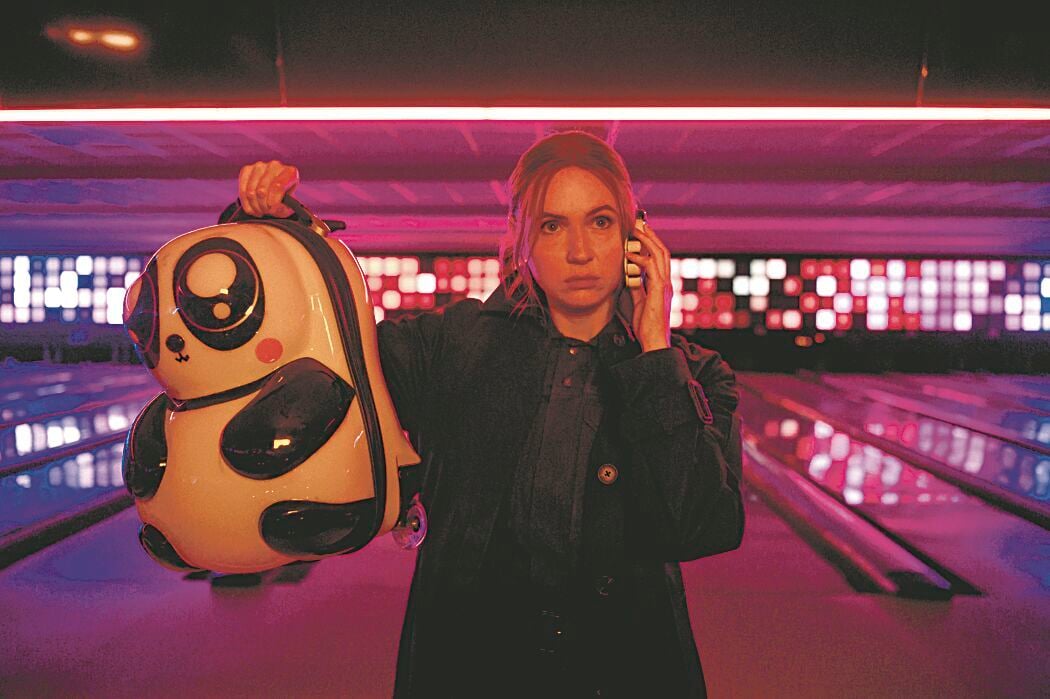 It is no secret that Quentin Tarantino’s “Kill Bill” is an homage to grindhouse cinema that incorporates elements of martial arts films and samurai cinema, spaghetti Westerns, blaxploitation, and revenge films. The story of the Bride (Uma Thurman) plays out over two films, with a total run time of over four hours. As with many of Tarantino’s projects, the film elicited love-it-or-hate-it reactions from audiences. The two-volume structure and the director’s penchant for graphic violence and stylistic flourishes exasperated some viewers, while others found the eclectic mix of genres daring and entertaining.

Tarantino is an unabashed cinephile. Those stylistic hat-tips are straight out of Tarantino’s bag of tricks and show his sincere respect for iconic filmmakers.

As they say, “what goes around comes around.” Director Navot Papushado pays tribute to Tarantino in his new film “Gunpowder Milkshake.” In fact, Papushado’s hyperactive action thriller integrates and assimilates facets of several filmmakers, from David Lynch to Jackie Chan. Instead of an homage or a love letter to Tarantino, though, “Gunpowder Milkshake” comes off as a brazenly imitative endeavor that wastes an immensely talented ensemble cast. The film debuted July 14 on Netflix.

The story opens with Sam (Karen Gillan) sitting in a booth in a diner waiting for a rendezvous. While she waits, a flashback sequence reveals that when she 12 years old, her mother Scarlet (Lena Headey), an elite assassin, abandoned her after killing half a dozen Russians. In her mother’s absence, Sam was taken in and raised by the Firm, a ruthless crime syndicate that had previously employed Scarlet.

Surprise, surprise: Sam, now in her late 20s, is a ruthlessly efficient assassin. The Firm utilizes her talents to clean up their most challenging messes. Apparently, Sam has never questioned her occupation and has served her faceless overseers obediently all these years, receiving her assignments from Nathan (Paul Giamatti). Nathan is part consigliere and part human resources manager for the Firm.

Due to bad intel and ill luck, Sam unintentionally kills the son of a rival criminal organization during what was supposed to be a routine operation. On her next hit job, she suddenly finds her moral compass when she must choose between fulfilling her obligation to the Firm and protecting the life of Emily (Chloe Coleman), the 8-year-old daughter of her target. Facing an ethical crisis, she turns to her “aunts,” Anna May (Angela Bassett), Madeline (Carla Gugino), and Florence (Michelle Yeoh), three former allies of Scarlet. Together, they must face the wrath of competing syndicates and their legions of merciless henchmen.

Set in a neon-lit noir-style cityscape with a surfeit of criminals and a complete lack of law and order, “Gunpowder Milkshake” tries to frame its conflict as a rebellion against the patriarchy, but it fails to adequately develop its central characters and give audiences any real reason to empathize with them. Sam’s epiphany feels empty, particularly when contrasted with her own implied history of brutality. The story plays out in an absurd comic-book vacuum, with oddly vacant streets and seemingly abandoned venues. Sam’s reality is populated only by associates and antagonists, and is utterly devoid of passersby to witness the many skirmishes that result in piles of dead gangsters.

The story simply does not give Gillan enough depth to sell Sam as a newly empowered female version of John Wick who is fed up with being called upon to do the Firm’s dirty work. While the film gets better whenever Bassett, Gugino and Yeoh are on screen, they, too, are underserved by the script. Papushado sacrifices charisma and continuity in his obsessive preoccupation with making every scene visually intense and cinematographically evocative. It’s style over substance, sparkle over soul.

Admittedly, “Gunpowder Milkshake” is an attractive film, visually. It is a candy-colored riot of ultraviolence and action. Each choreographed fight scene is a mind-blowing ballet of violence. Unfortunately, all the action plays out against an intentionally artificial backdrop. The uncanny and unsettling scenery coupled with the poor writing result in a fatal disconnect between the viewer and the protagonist. The film’s overriding detachment makes it a frustrating trek through. As ostentatious as it is unrewarding, “Gunpowder Milkshake” could have been so much more than a quirky, brutal bubblegum epic inhabited by sadistic cutthroats, cruel opportunists and morally ambiguous characters.