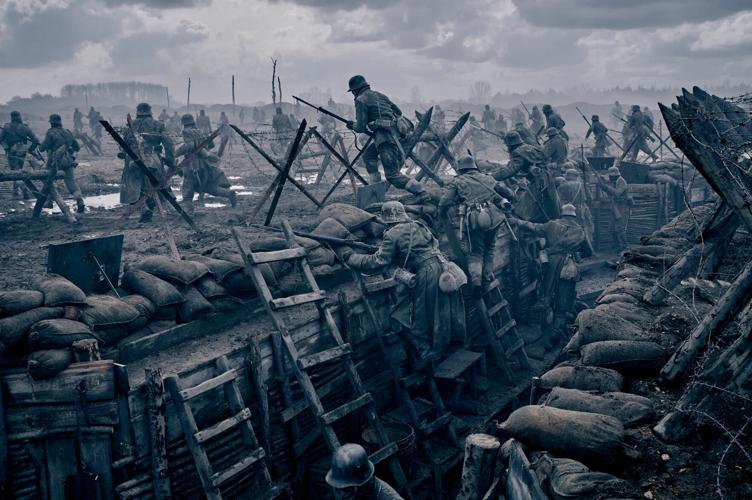 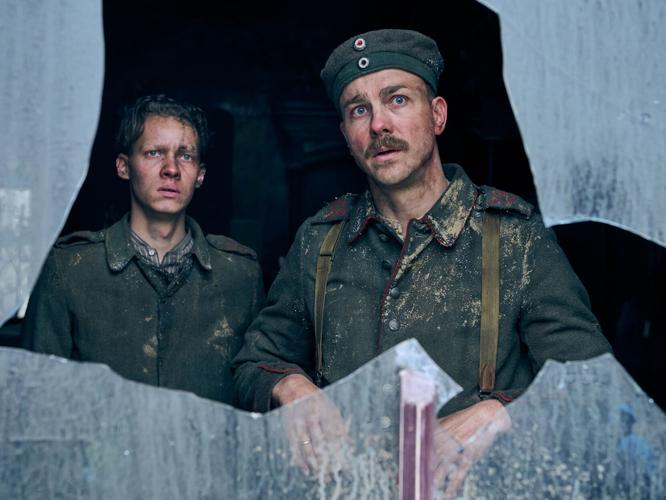 Felix Kammerer stars as Paul Bäumer and Albrecht Schuch as Stanislaus “Kat” Katczinsky in “All Quiet on the Western Front.” 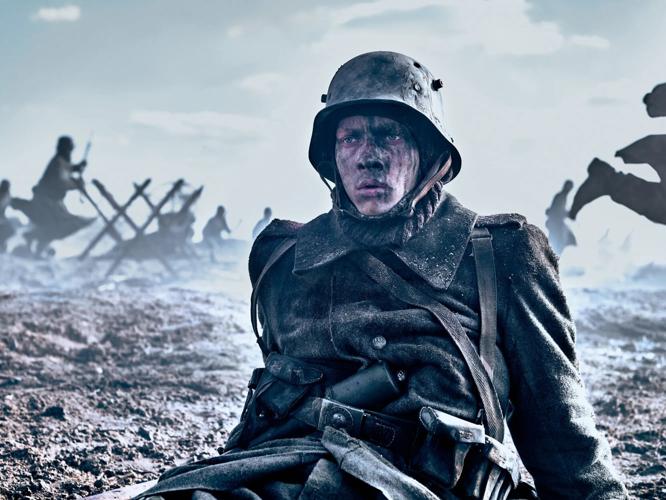 Felix Kammerer stars as Paul Bäumer in “All Quiet on the Western Front.” 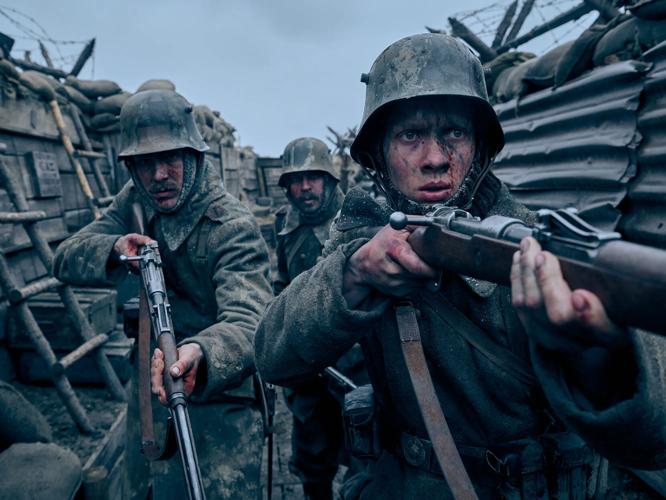 Albrecht Schuch stars as Stanislaus “Kat” Katczinsky, Felix Kammerer as Paul Bäumer, and Edin Hasanovic as Tjaden Stackfleet in “All Quiet on the Western Front.”

Felix Kammerer stars as Paul Bäumer and Albrecht Schuch as Stanislaus “Kat” Katczinsky in “All Quiet on the Western Front.”

Felix Kammerer stars as Paul Bäumer in “All Quiet on the Western Front.”

Albrecht Schuch stars as Stanislaus “Kat” Katczinsky, Felix Kammerer as Paul Bäumer, and Edin Hasanovic as Tjaden Stackfleet in “All Quiet on the Western Front.”

Depending upon the source, between 15 million and 22 million people — military and civilian combined — died in World War I, which ran from 1914 to 1918. The death and devastation seen in that global conflict was unprecedented. The impact of the war on society is epitomized by the name affixed to the generational cohort that lived through the turmoil: They have become known as the Lost Generation, a term accredited to Gertrude Stein that was propagated by Ernest Hemingway.

They’re all gone now. Englishman Claude Choules was the last surviving confirmed combat veteran of World War I. He joined the Royal Navy from 1915 at age 14, and in 1917 he served aboard the battleship Revenge.

In the 1920s, he relocated to Australia and transferred to the Royal Australian Navy. He continued to serve through World War II and into the 1950s. Choules died in 2011 at the age of 110.

In a 2009 article by Europe correspondent Emma Alberici for the Australian Broadcasting Corporation news service, his daughter said that Choules shunned Armistice Day commemorations “because he is against the glorification of war.”

Film and literature tend either to glorify combat or lay bare the horrors of war — and it’s a fine line that separates the two themes. When revealing the brutality of the battlefield through the eyes of a protagonist, it’s difficult not to fall into the trap of substituting moralistic glory as a driving force rather than basic survival.

It’s not that there aren’t heroes on that battlefield. It’s that they wouldn’t be required to put their lives on the line if various politicians, diplomats, and heads of state had found a path to peace.

“Politicians hide themselves away, they only started the war,” Ozzy Osbourne sang in “War Pigs,” Black Sabbath’s 1970 anti-war anthem. “Why should they go out to fight? They leave that all to the poor.”

One wonders if Osbourne and his bandmates read “All Quiet on the Western Front” by Erich Maria Remarque prior to recording the song. Remarque’s novel follows the experiences of a group of young German soldiers in World War I. Published in book form in 1929, it was among the first books banned and burned in Nazi Germany.

Nazi book burnings began in 1933 with an attack on the library and archives of Magnus Hirschfeld's research institute — a collection that included works on intersexuality, homosexuality, and transgender topics, among other subjects.

Fortunately, “All Quiet on the Western Front” had already sold 2.5 million copies in 22 languages. It was first adapted for film in 1930 by director Lewis Milestone. The cast included Louis Wolheim, Lew Ayres, John Wray, Arnold Lucy, and Ben Alexander. It won Academy Awards for Best Picture and Best Director.

It was also banned by Nazi Germany, but only after Joseph Goebbels’ brownshirts had physically attacked audience members at the German premiere in Berlin.

The German-language epic anti-war film based on Remarque’s novel was released to streaming on Netflix Oct. 28. With a runtime of 147 minutes, Berger’s “All Quiet on the Western Front” is a cinematic masterpiece that mesmerizes viewers with an overwhelming sense of authenticity and total immersion in the foulness of trench warfare.

The film focuses on Paul Bäumer (Felix Kammerer), a young German soldier on the Western Front of World War I. Paul and his comrades experience first-hand how the initial euphoria of war turns into desperation and fear as they fight for their lives, and each other, in the trenches.

Once they arrive on the frontline, Paul, Albert (Aaron Hilmer), and Franz (Moritz Klaus) don’t have much time to acclimatize. While bailing out the trenches during a rainstorm, Paul encounters Kat (Albrecht Schuch), who offers him something to drink. The two become friends.

Later that night, the French launch an artillery attack. Paul joins others in taking shelter in a bunker, only to be buried alive when a grenade tumbles into the hideout. He is pulled from the rubble the next morning and is immediately directed to start collecting the dog tags of soldiers who were killed during the attack. While doing so, he discovers Albert among the dead.

After depicting Paul’s first 24 hours on the battlefield, the film jumps forward 18 months. Paul’s physical transformation is arresting: He is emaciated and pallid, as if straddling a fine line between a slow, lingering death and the finality of the grave.

The screenplay Berger uses condenses the novel out of necessity, eliminating aspects of the narrative as well as certain characters, while focusing primarily on life in the trenches. Running parallel to Paul’s story, German Minister of Finance Matthias Erzberger (Daniel Brühl) has been tasked with working out terms for an armistice with France. In these scenes, it becomes clear that while most in the German government have privately acknowledged that defeat is imminent, the stubbornness and arrogance of a handful of military leaders will delay a cease-fire agreement.

Among all the gathered negotiators and ambassadors, only Erzberger shows any sense of urgency and concern for the soldiers dying in the trenches. It’s a blistering condemnation of the failure of diplomacy — and specifically, the willingness of those who occupy seats of power to exploit and sacrifice countless lives rather than cooperate, compromise, and seek common ground.

Berger highlights the contrasting worlds: While the negotiators dine on fine china, enjoying bountiful meals prepared in well-stocked kitchens, Paul and the other soldiers are literally starving, and often resort to theft to obtain a decent meal. The statesmen are clean, well-groomed, and healthy. The soldiers are malnourished and filthy, and their eyes reflect the bleakness of their existence.

“War is automatically associated with heroism,” Berger said in the film’s production notes. “Of course, it was also horrifying and resulted in terrible losses for these countries, no doubt. But it was an experience with a successful outcome and these days, when an American or British director portrays war in a movie, this feeling sort of permeates on its own accord.

“Contrary to this, it was important to me to take on the German perspective. It’s a perspective which no longer exists in modern war movies because we usually lack the courage and the opportunities to show it.”

Berger said that Germany’s view of war is marked by grief and shame, sorrow and death, destruction and guilt.

“There is nothing positive or heroic,” he continued. “Every death, regardless of which side, is a death and is therefore simply horrific. It’s a person who died.”

Berger said he felt that making our history, background and attitude towards war the driving force behind the movie was a huge and fascinating challenge. “And I thought it might be interesting to share this perspective from Germany with the world.”

“All Quiet on the Western Front” is as ambitious as it is horrific. It is a larger-than-life epic that manages to stay true to life in its representation of both the tediousness and the terror of life in the trenches. And yes, it conveys the shopworn message “war is hell” — not that it ever seems to reach the right people.