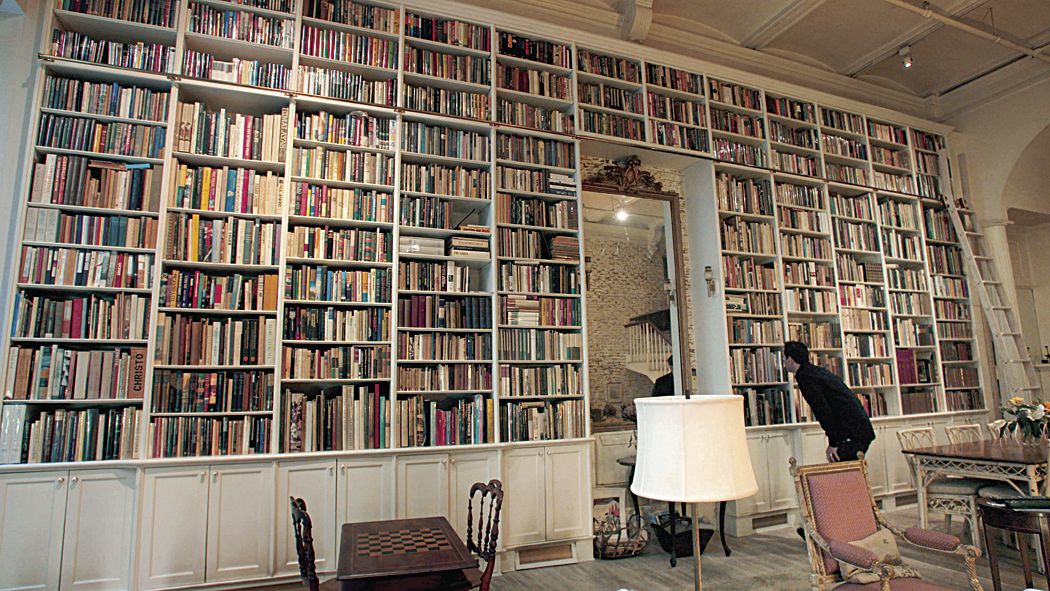 Adam Weinberger examines a bookshelf in “The Booksellers.”

When I was a kid, every Friday evening my parents would visit Haslam’s Book Store — that venerable old business on Central Avenue in St. Petersburg — and I would wander off down the seemingly endless aisles and gaze up in wonder at the towers of dusty tomes stacked to the ceiling. I was certain that every book ever published must have passed through that building at some point. Whether I was browsing titles in the children’s area, digging through stacks of ragged comic books or perusing lurid sci-fi pulp magazine covers, I felt a curious mix of contentment and exhilaration.

At least, that’s how I remember it.

Those frequent visits to Haslam’s spawned a lifelong love of books — not just reading books, but collecting them … possessing them … being surrounded by them. And not just traditional books: I can also trace my love of comic books back to Haslam’s.

“The Booksellers,” a new documentary by D.W. Young, speaks volumes about the evolving world of book collecting. It offers a thorough overview of New York City’s book world, detailing more than a century of history and providing contrasting opinions about its future. It features a procession of characters in the form of booksellers and book collectors, each with their own eccentricities. The commentators include Fran Lebowitz, author and public speaker; Gay Talese, journalist and bestselling author; Adina Cohen, Naomi Hample and Judith Lowry, the three sisters of the Argosy Book Store; Rebecca Romney, who is go-to expert on “Pawn Stars” and a rare book dealer at Type Punch Matrix; Adam Weinberger, another “Pawn Stars” regular and an intrepid book hunter; and Nicholas Lowry, an appraiser for “Antiques Roadshow” and president of Swann Auction Galleries.

This is a film for anyone who loves books or who has a preoccupation with collecting. It is lovingly constructed, with whimsical anecdotes and insightful predictions. It is part celebratory tribute and part elegiac prognostication.

The viewer learns about some of Manhattan’s most famous bookshops, including the Stand and the Argosy Book Store. Young goes over key figures in the history of the field, from A.S.W. Rosenbach, who popularized the collecting of American literature and who was known as “the terror of the auction room” at Sotheby’s, to Madeleine B. Stern and Leona Rostenberg, who unearthed Louisa May Alcott's pseudonymous career as A. M. Barnard, a successful writer of sensational romance fiction.

But Young’s documentary doesn’t just dwell in the shadow-haunted corridors of bookstores and the dealer booths at the New York International Antiquarian Book Fair. He visits individual collectors in their homes and apartments and revels in their accumulated treasures.

“The world is divided between people who collect things and people who don’t know what the hell these people are doing collecting things,” says one commentator in the first five minutes of the documentary. Unless you understand the impulse, these book collectors may seem a bit deranged, but only in the most charming manner.

Likewise, choosing antiquarian books as a profession may seem an unwise course of action to one not already enamored with the lifestyle. During a casual group discussion near the end of the documentary, several of the participating booksellers have no trouble coming up with a list of reasons not to go into the business: the scarcity of the product, low demand and the requirements of being both a psychologist and salesperson to close a deal are among the arguments.

“What else would you rather do?” said Dave Bergman, described in the production notes as the “smallest dealer with the biggest books.” Bergman has been in business since 1989 and deals in general antiquarian stock with specialties in natural history, paleontology, decorative arts and trade catalogs. His devotion to the trade is evident. It is a trait he shares with all the others: an admiration of the power of the printed word and of the universe of ideas that can be condensed into and extracted from a book.

But what is the future of books?

According to one of the interviewees, the number of bookstores in New York City went from 368 in the 1950s down to 79 in recent years.

Young’s documentary addresses many of the reasons why used bookstores are struggling. One is the need for instant gratification. Today’s average book buyer generally knows what book they intend to purchase before they approach the bookseller, whether they are shopping online or at a brick-and-mortar establishment. They aren’t interested in browsing titles and they aren’t seeking recommendations. And they definitely aren’t the kind of people who crawl around on the floor, dig through stacks of books and are genuinely delighted at finding something they aren’t actually seeking — because they didn’t know it existed.

And then there’s the internet.

“It’s become ruined by the internet,” said one bookseller in the film. “It’s great for collectors that the internet exists. They find books that they spent decades trying to find unsuccessfully in the past at the touch of a key. But, to be a surviving used bookseller is … almost impossible.”

The internet, says another bookseller, has killed the hunt.

“The Booksellers” acknowledges these struggles, but maintains an optimistic view throughout. That optimism is best expressed by Rebecca Romney.

Right now, brick-and-mortar bookstores in the Tampa Bay area are closed due to the COVID-19 pandemic. Under the governor’s executive order and Pinellas County’s order, all non-essential businesses are closed. That list of non-essential businesses includes bookstores. That means that I can’t visit Haslam’s and walk down those familiar aisles of books. I can’t check to see if the bookstore on Madeira Way survived the recent road closure during the construction of a new condo. I can’t visit Books at Park Place in its new home in Gulfport.

That’s OK, though: I have shelves full of books that I can read or re-read. That’ll keep me busy … for a little while.

“The Booksellers” opened nationwide on April 17 as part of Greenwich Entertainment’s virtual cinema initiative. Greenwich is partnering with movie theaters that are currently closed because of coronavirus precautions so their customers can still watch “The Booksellers” and patrons can support their local theater during this difficult time.

In the Tampa Bay area, viewers can watch “The Booksellers” and have part of the proceeds go to Tampa Theater. To do so, visit www.booksellersmovie.com, click on “Watch at Home” and then enter your location and select Tampa Theatre.