Gertrude Warnick was working as a practical nurse when she died while reportedly rescuing nursing home residents in a fire that killed 32 others in Largo in 1953. She was buried in an unmarked grave until last month. 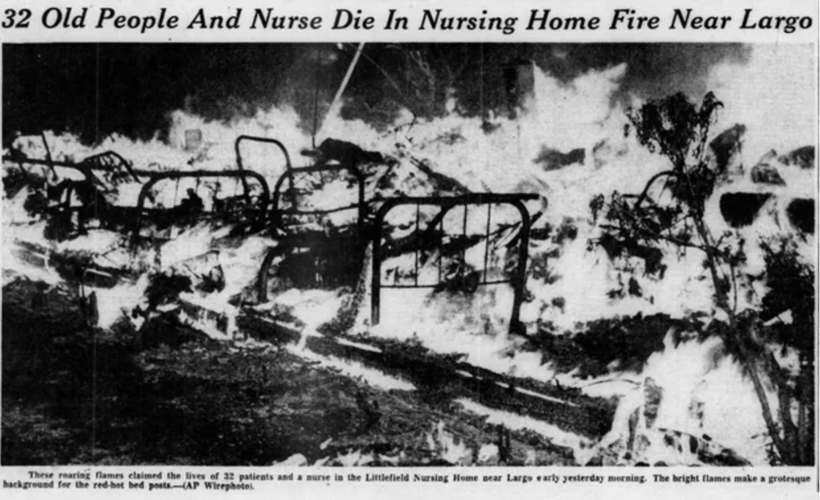 Gertrude Warnick was working as a practical nurse when she died while reportedly rescuing nursing home residents in a fire that killed 32 others in Largo in 1953. She was buried in an unmarked grave until last month.

Gertrude Warnick died 69 years ago, hailed, then questioned, then forgotten. Since 1953, her body has rested in an unmarked grave under patchy dirt and creeping weeds at Clearwater Municipal Cemetery.

It started on March 30, 1953, when news clips and eyewitness accounts reported Warnick running in and out of a crumbling building, the heat “so intense it blistered paint on buildings across the road,” while rescuing at least one patient from a fire at the Littlefield Nursing Home in Largo.

In all, 33 people died that night, including Warnick.

A few weeks later, the couple who owned the nursing home testified in a trial about who was at fault. Mrs. Littlefield, one of the owners, claimed Warnick died in her bed and “could have been under the influence of something that night.”

Warnick was new to the job, an orphan with one sister, no husband and no children. When the jury ruled the cause of the fire was undetermined, the nurse and her role were quickly forgotten.

In 2021, an amateur historian came across Warnick’s name while looking through old records. He started digging. And he believed the eyewitness accounts of her actions that day.

In April, the Tampa Bay Times shared her story.

In October, Warnick got a headstone.

Here’s how it happened.

If you are in the ground …

Craig Siapno climbed off his bike one day and walked through an old cemetery. He saw the history of Clearwater told one headstone at a time. Now, a few times a year, he walks through old cemeteries, maybe Rousseau or McMullen in Clearwater.

Siapno and his wife both came from great families, “but we had nothing … I’ll put it this way, when the TV broke in 1958, we didn’t have another one until 1962.”

He retired as an insurance adjuster after seeing some of the worst things people face — fires, crashes, death — and knows how easy it is to lose everything.

When he read about Warnick, Siapno felt sad. Then he sent an email.

“Ms. Hare, read your article about a headstone for Gertrude,” he wrote on the day the story ran. “If you advise me who to make a money order to and where to mail, I will send $50 toward the cost. I am nobody, and when my call to the other side comes, my instructions are for cremation and (to be) dumped in the Gulf. That said, I believe if you are in the ground, there should be a marker.”

He soon delivered a $100 money order to the Clearwater Historical Society.

Over the phone, he took a long pause when asked about it.

“We’ve just been so fortunate,” he said.

Then he asked where he could find Warnick’s newly marked resting place. He plans to go see her at block 8, lot 8, plot 3 on one of his cemetery walks.

Like his mother and father, Kevin Cantrell works in granite, marble and memory.

In 1985, Will and Doris Cantrell opened a monument company in Tarpon Springs. Now, the Cycadia Monument Co. is run by Cantrell, his wife and their two sons.

He heard about the nurse in the unmarked grave from the head of the Dunedin Historical Society. Then he read her story.

Cantrell decided to donate a headstone, something he tries to do when he can. His son, KJ, engraved it. They worked out the logistics with the city. He figures it was worth about $575. And in October, the sandy patch of unmarked earth where Warnick rests got a marker. Stories like hers matter, Cantrell said. They’re part of our history.

“People are able to feel their roots, trace their roots that way. People feel part of the community that way.”

It’s important that someone’s name is permanent, he said.

“It’s not going to go away with the weather.”

After her story was told, before her name was etched in stone, Warnick’s name was plastered on a few trolleys. She’s one of several people featured on the Clearwater Jolley Trolley’s Haunted Clearwater Tour.

That tour raised about $5,000, which will be given to the Clearwater Historical Society, said CEO Michael Helmstetter. Some of that money includes payment for using the historical society’s property as a pickup for the tour.

But the value of what’s happened since the nurse’s story resurfaced goes beyond just her headstone.

“The whole cemetery is in the middle of a major, well-needed makeover.”

That includes removal of an old fence and dead trees. Overgrown bushes got trimmed. And a place that felt neglected — one that includes graves of Clearwater’s founders — got new life.

And the people who made it happen are not done yet.

A headstone for Carrie

The man who first discovered Warnick’s story drove out to see her recently.

“It was neat,” said David Barmore, who volunteers with the Dunedin History Museum. ”It made me feel that she’s not forgotten anymore.”

In discovering Warnick’s story, Barmore worked with Vinnie Luisi, executive director of the Dunedin History Museum. Luisi hasn’t been out to see Warnick yet but plans to visit this week.

“I’m just grateful that her name is out in the public now,” he said. “People are aware of what she did, and she’s recognized in the cemetery.”

With the remaining donations, the volunteers plan on getting a headstone for the woman Warnick reportedly died trying to save. That woman, Carrie Hatcher, rests in an unmarked grave next to Warnick. Her headstone will go in next year.

They aren’t the only people lost to history and now returned.