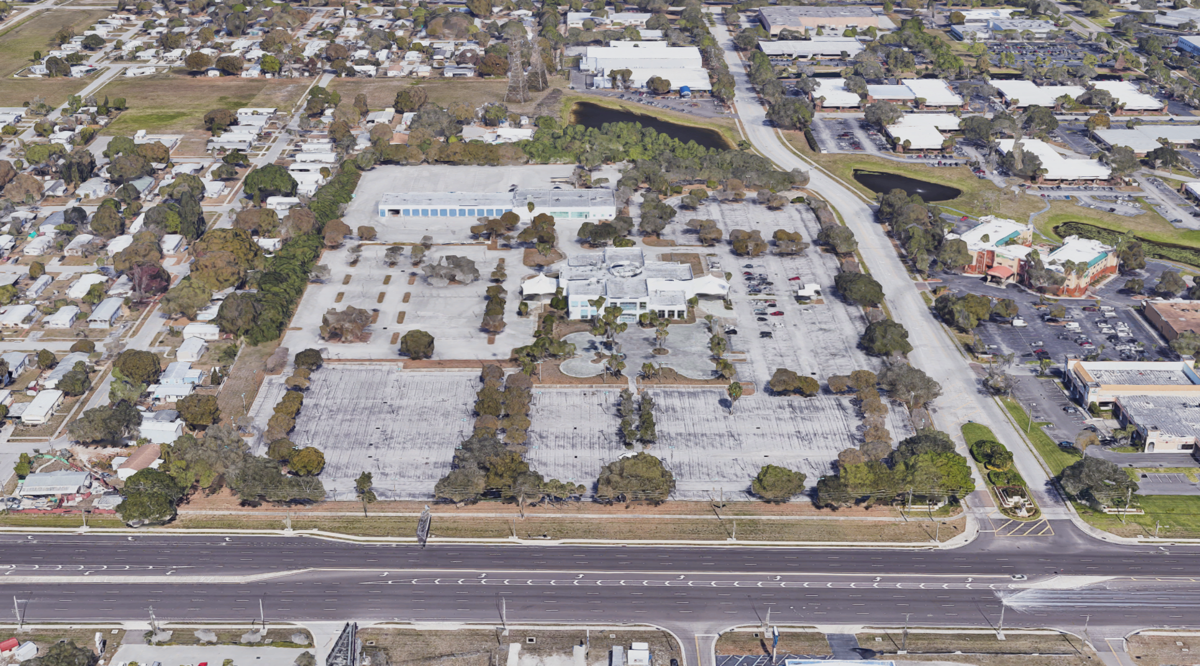 CD ICOT Properties hoped to turn part of the 20-plus acre property at 13600 ICOT Blvd. into a Topgolf-style high-tech driving range with a bar and restaurant. That plan was killed, however, after Topgolf decided to open its own facility less than 10 minutes away in the Carillon area of St. Petersburg. 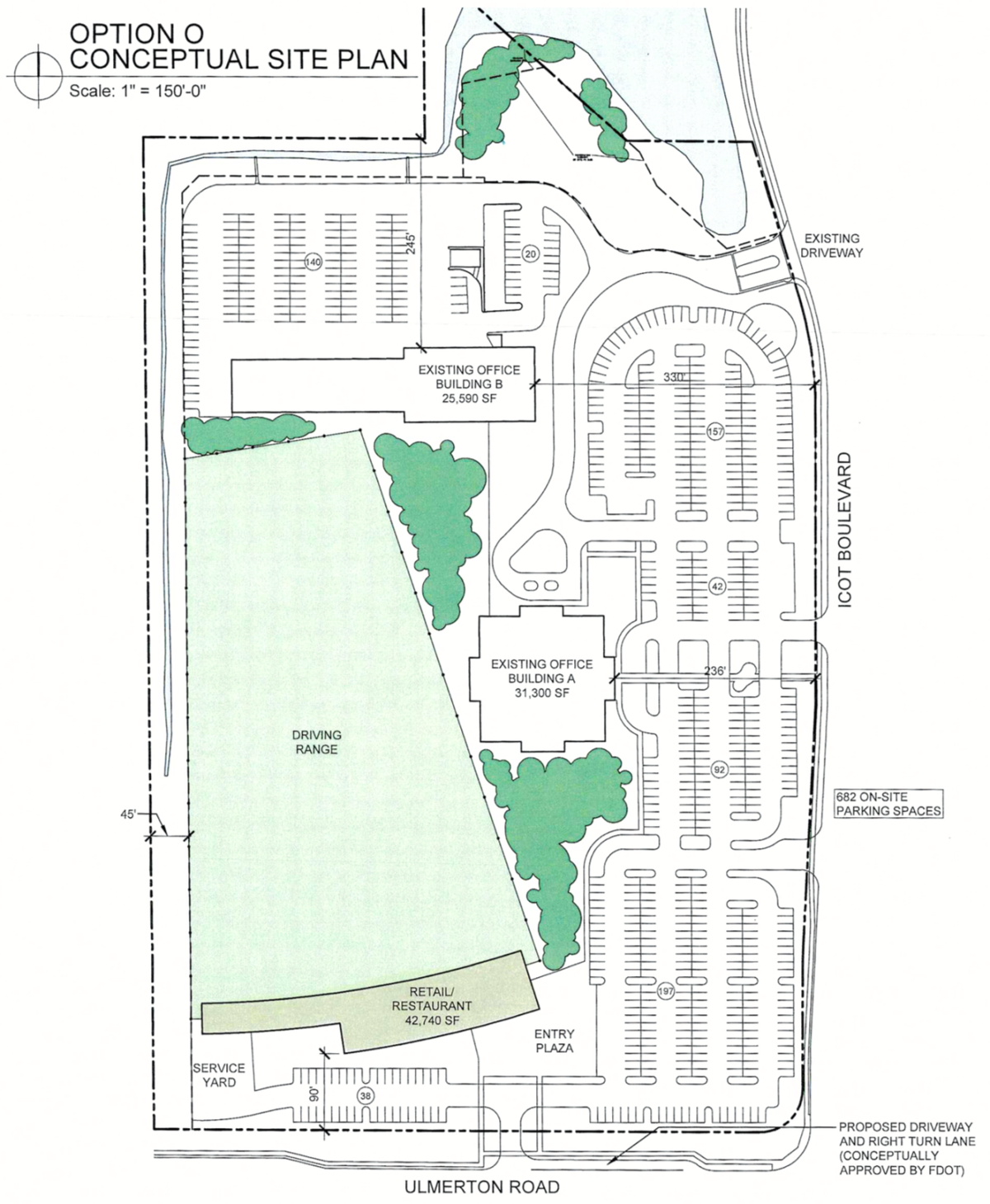 This site plan shows CD ICOT Properties’ plan to use a portion of its property at 13600 ICOT Blvd. for a mixed-use development featuring a driving range and retail/restaurant space.

CD ICOT Properties hoped to turn part of the 20-plus acre property at 13600 ICOT Blvd. into a Topgolf-style high-tech driving range with a bar and restaurant. That plan was killed, however, after Topgolf decided to open its own facility less than 10 minutes away in the Carillon area of St. Petersburg.

This site plan shows CD ICOT Properties’ plan to use a portion of its property at 13600 ICOT Blvd. for a mixed-use development featuring a driving range and retail/restaurant space.

LARGO — A local development group thought the east side of Largo would be a prime spot for a Topgolf-style destination that combines a high-tech driving range with bar and restaurant. The plan was drawn up, the neighbors had been informed and, after months of work, the project was moving forward.

Unfortunately for that group, Topgolf had the same thought and unveiled a plan in April to open its first Pinellas County location less than 10 minutes away in the Carillon area of St. Petersburg.

Knowing it couldn’t compete with the global entertainment company at its own game, the CD ICOT Properties group scuttled its plan and is still in search of the right fit for its 20-plus acre property at the northeast corner of Ulmerton Road and ICOT Boulevard.

“It was a shocker to everybody when we found out that Topgolf was going into Carillon,” said Shane Crawford, vice president of development for CD ICOT Properties. “So we’re back to the drawing board, sort to speak.”

Crawford said the group, which also owns Feather Sound Country Club, at first considered franchising but instead decided to go on its own by putting its own spin on the Topgolf idea.

The plan was for a high-tech driving range and 42,740 square feet of retail/restaurant space to accompany the 56,780 square feet of office space that two buildings, which includes Community Health Solutions of America, already take up on the property that used to be an AutoNation car dealership.

Crawford said the project was gaining momentum and excitement. But then Topgolf decided it was going to play through.

“It was bittersweet,” Crawford said, noting that Feather Sound Country Club will likely benefit from the traffic the new Topgolf facility will create. “We had some pretty big aspirations for doing something like that here, but we’re taking it in stride. So, we’ll just have to shift gears and do something else.”

Fitting in with ICOT

Crawford said he is working with city officials, who have a couple of different ideas for the property that the group bought in 2015 for $10.75 million.

The city’s economic development manager, Teresa Brydon, is one of those people trying to help the group envision the right development for the large, underdeveloped property — a rarity in Pinellas County.

“We have started talking to them about opportunities with like a new office tower or potentially a new hotel,” Brydon said.

Since the ICOT Center where the site is located is a high-end industrial complex, Brydon said something like a hotel with conference space for nearby businesses makes sense.

“From the city’s perspective, we always viewed it (the property) as a great opportunity to add to what the ICOT Center is all about,” she said.

Officials from Pinellas County also have eyes on the site.

The Gateway Master Plan, a $1 million redevelopment strategy spearheaded by Forward Pinellas, the county’s land use and transportation planning agency, has identified ICOT and the 20-acre site as a key area with a high development potential.

The plan, which focuses on the 30-square-mile Gateway area that has more than 114,000 jobs, says 60% of the property is paved parking, and its proximity to residential and workforce populations make it a prime spot for redevelopment.

Yet, with all its locational advantages, the area still has its challenges, Brydon said.

“It has an identity issue because it has so many unique property owners,” she said. “You have everything from St. Pete College to the Clearwater Ice Arena to BIC. You have some real big industrial users, so it’s a whole bunch of stuff that’s unique to the ICOT Center.”

In April, however, the City Commission voted to repeal the region’s Master Plan, removing some development restrictions.

Planning Manager Rick Perez said the 20-year-old plan was outdated and didn’t reflect the city or county’s goals, so ICOT will now fall under the city’s Comprehensive Plan and Code.

Under the city’s plan, Perez thinks there is more potential to expand existing businesses and bring in more jobs.

Brydon agrees with that assessment.

“We at the city and I think that everyone at ICOT view that as extremely positive for continued growth of the various entities,” she said. “It gives a lot of people the ability to expand their footprint and do a lot more on their building sites.”

Until something promising emerges, Crawford said the ICOT group will be patient and focus on continuing to improve some of its other properties, such as Feather Sound Country Club, which it bought for $5.15 million in 2014.

“My CEO (Dale Schmidt) bought it in 2014 and has invested considerable amounts of money in not only the golf course, but the clubhouse to make it a desirable club,” he said, adding that they are considering adding other elements like a new bar.

Crawford also remains positive about the future ICOT property, but uncertainty still looms over the site.

“I wish I could tell what it’s going to be, but I can tell you it won’t be a driving range,” he said.